One of the questions I am most frequently asked is, “How often do you root prune?”  This is a tricky question and one for which I wished there were a more clear cut answer. First let’s dispel a myth.  Ready? Ok, here it is. We do NOT root prune every tree in the nursery.  (Take a minute and digest that one, sit down if you need to.)  Now that you are over the shock, I’ll tell you why we don’t.

First, let’s talk for a moment about what exactly root pruning is.  Root pruning is just what it sounds like: cutting roots just as we would cut branches, only we do it with a tree spade, a shovel, or a trenching machine. Some of the reasons to prune a tree include:

Some trees might need to be dug in a less than preferable season.  For example, oaks typically do not dig especially well at any other time than when they are dormant. But let’s say that the trees might not be needed until July.  We would then choose to root prune the trees during dormancy to help prepare the trees for digging outside of their optimal season.

I often like to say that trees are not multitaskers; most are only capable of doing one thing at a time. They can either put out new roots, or new leaves, but not both at the same time. Root pruning a tree will often slow down the growth of the tree. By severing their roots, it forces the tree to put energy into regeneration of new roots rather than primary and secondary growth (getting taller and putting on caliper). And more roots are good, right? RIGHT!

Because a root pruned tree will have a higher concentration of roots in a closer proximity to the trunk of the tree, we are often able to put a root pruned tree in a smaller root ball.  This turns into a win-win for those projects that cannot accommodate a larger ball size or a large piece of equipment.  This also ties in nicely to purposefully slowing down the growth of a tree.

The benefits of root pruning are realized for more than just one season. A tree that was root pruned in 2013 will be more easily dug in an off season for likely two to three years beyond the date of the root pruning.

In a recent demonstration, we root pruned a red maple in early spring (we actually root pruned it for a demonstration on bare-rooting that was rescheduled for a later date). The preparation work we did for this demonstration provided an excellent study in just how effective root pruning can be at creating new roots! In the photo below, you can see how many new fibrous roots were generated in just four months’ time. 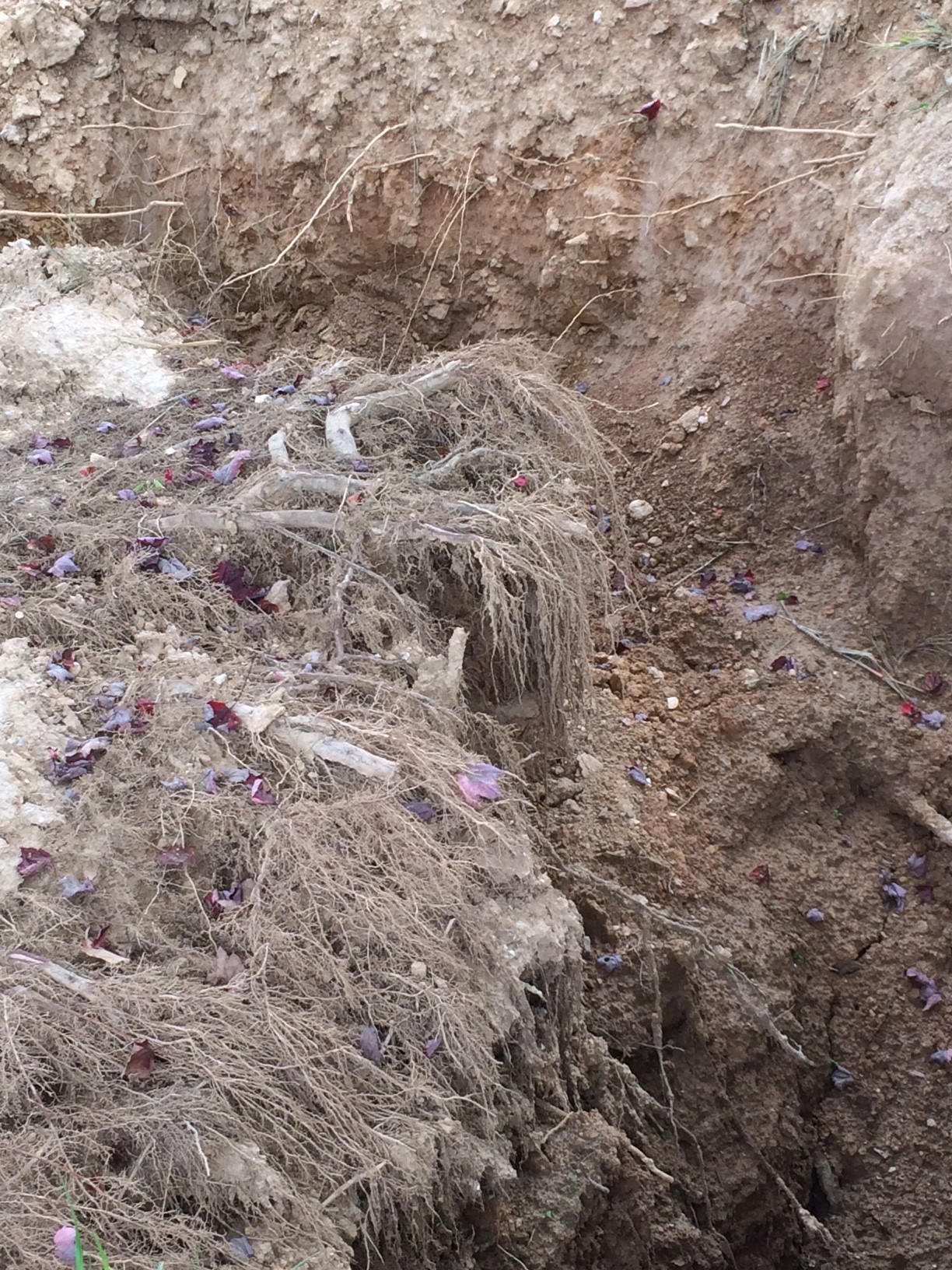 Will you just look at those gorgeous roots! You can’t have lustrous hair without a trim every now and again, the same may hold true for the roots of many species of trees.

So, knowing what we do about the many great benefits that root pruning can realize, shouldn’t we just root prune each and every tree in our nursery? In a paragraph above, I mentioned that root pruning will often slow down the growth of a tree, making it a great way to control growth in fast growing species such as Liriodendron (tulip poplar) and Prunus (cherries). But what about Fagus (beech) or Gingko?  Slowing down these already slow growing species would result in longer than average growth times, resulting in fewer available trees.

Another simple – and honest – reason for not root pruning is time, or more specifically the lack thereof.  Root pruning is time consuming.  Each year we root prune (or plan to root prune) a certain number of trees so that we can expand on the typically short harvest window. Root pruning in the spring allows us to dig throughout the less than desirable digging months of summer. We mark these trees with a special color of ribbon and a silver tag with their root prune date on them so that we can track their history and progress.

Some trees need to be prepared months and sometimes even years in advance, so knowing when your projects will be installed is a critical first step for the success of its trees. Find a nursery that you can trust and with whom you can develop a relationship and you are sure to see a difference in the quality and performance of the trees.

Ronda Roemmelt is the sales manager and representative for Mid-Atlantic sales at Ruppert Nurseries in Laytonsville, MD. In addition to 20 years of industry experience, Ronda also has a Bachelor of Science in Agricultural Science from Pennsylvania State University with a minor in Horticulture. Ronda is a Certified Professional Horticulturalist and an ISA Certified Arborist.