(Some) Nurseries Talk Back about Tree Root Quality

This summer we surveyed arborists and designers about the issues they encountered buying trees free from uncorrectable root defects. We published the results of that survey on this blog.

To review: nursery-grown trees, especially those in containers, can have root defects such as girdling, circling and diving roots which contribute to tree health problems or destabilization later in the life of a tree.  Because the problems occur months or years later, the cause-and-effect relationship requires an experienced eye to discover and prevent. Our survey this summer indicated that while many customers want to buy trees without defective roots, the realities of budgets and timelines may force them to accept and plant whatever is being grown and sold.

After publishing the results of the first survey, we wanted to explore the issue from other points of view by hearing from the nursery industry. As with the first survey, we offered respondents anonymity so they could speak freely. But how to reach all the tree nurseries and growers in North America?

We decided to start by reaching out to the preferred vendors mentioned by the arborists and designers who answered the first survey, adding in some of our personal contacts, for a total of about 75 nurseries. We also published the survey link with urban forestry professionals on LinkedIn and on the Landscape Architecture forum Land8.  Still, we ended up with a small sample size of 23 respondents from the nursery industry.

This lack of response in itself tells a story: There is a poor connection and lack of communication between growers and their customers, leading to a mismatch between customer needs and product quality. Still, we thank those that did respond and will analyze the responses below.

Respondents were spread around the United States, plus one from British Columbia. Most were producing containerized stock in a variety of sizes, although about half the growers also produced balled and burlapped trees. One nursery grew trees in a high caliper grow bag system only. 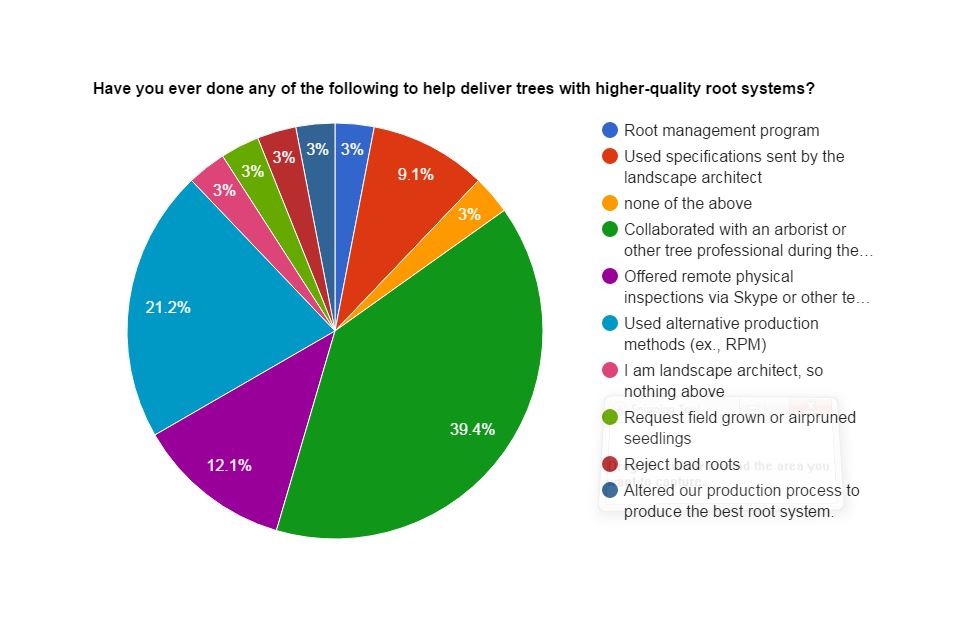 When asked, “Have you ever done any of the following to help deliver trees with higher-quality root systems?,” nearly 40% said they have collaborated with an arborist or other tree professional during the growing process.  Just over 20% were using alternative production methods such as RPM. Offering remote physical inspections via Skype or other means, or using root specifications sent by the landscape architect were other methods mentioned.

In this question, multiple answers were allowed, so some respondents were using more than one method to deliver trees with higher-quality root systems. One respondent wrote in, “We plant at the correct height in both container and field production…” indicating that they are aware of the correlation between buried root crowns and proliferation of circling roots. 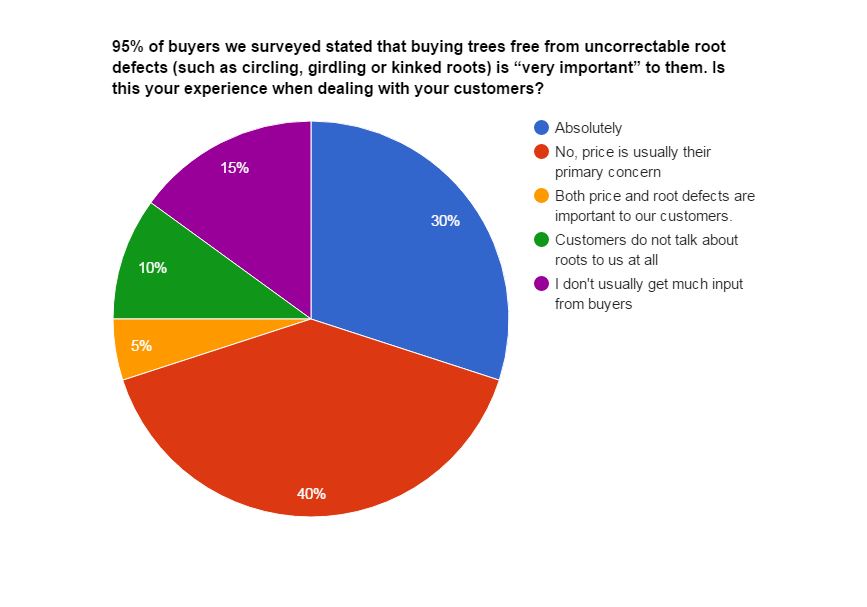 Growers indicted that availability was the most common complaint by nursery customers, followed by cost. Quality of root system was pretty low down on the list of complaints. However, this may be because many of the nurseries we surveyed were taking steps to produce better trees – after all, they were on the list of preferred growers indicated by our previous survey.

Growers surveyed felt that their customers were most concerned with price, although about a third of them indicated that buying trees free from uncorrectable root defects was “very important” to their customers. About 10% stated that “customers do not talk to us about roots at all.” It is not clear whether this is because their trees have higher quality roots, or because customers do not know or care.

Most respondents told us that their stock was rejected less than 10% of the time. Reasons for rejection were varied, and “potential girdling roots” was mentioned as a reason only by one respondent. Again, this could be either because our respondents had better products or that customers were not knowledgeable enough to reject defective stock.

In our initial survey of tree buyers, nearly 80% of them told us they would be willing to pay more for trees guaranteed to meet root quality specifications such as those published by the International Society of Arboriculture.

We asked growers, “Do you feel there is a demand/market for good quality trees that cost up to 20% more than current average prices?” About 17% said “Yes, definitely” and about an equal amount felt there was not. Slightly more than half of respondents felt that certain customers would pay more, specifically arborists and urban foresters rather than landscape contractors (as indicated in the write-in comments at the end). 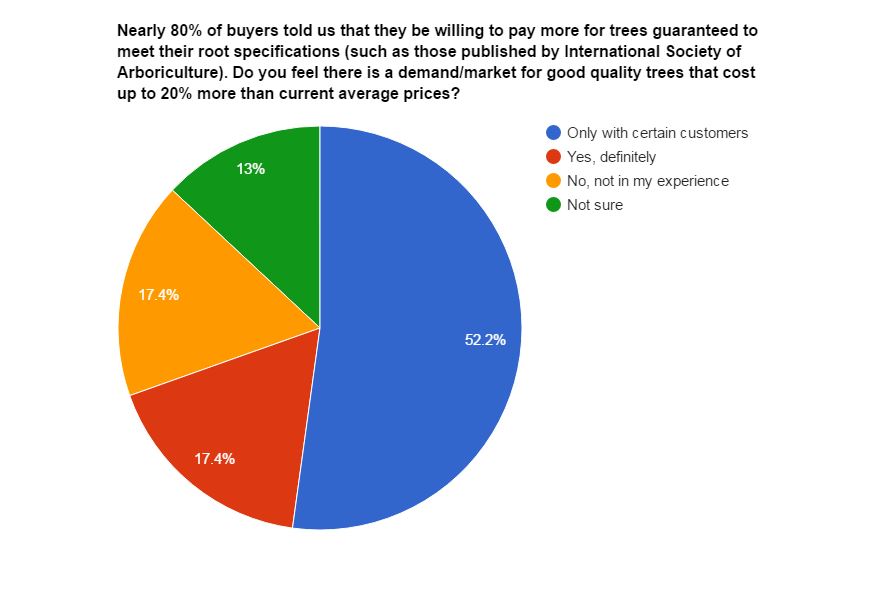 Although about a third of respondents considered the low-bid environment to be very much an impediment to growing high-quality trees, this was not a universal sentiment. One wrote in, “Anyone who claims this is an issue is dead wrong. You can grow a good plant with good growing practices for a competitive price. We’ve been doing it for 25+ years.” (Too bad these responses were anonymous – we’d all like to get the name of that grower!). About a third of respondents did not consider the low-bid environment a driving force.

The mismatch between buyer needs and product quality isn’t going away anytime soon.

Only one of our grower respondents recognized that a tree with root defects can be in effect, a “ticking time bomb” – a tree with the potential to destabilize or decline years after planting. Until this idea is commonplace among growers and customers, inspecting and tagging trees in person is the best method to ensuring that trees free from uncorrectable root defects are installed.

One interesting idea was offered in the free response section of the survey:

We are actively trying to get nurseries “certified” as following agreed-upon growing practices to help insure quality root systems. We are thinking of having growers sign a compliance agreement that they follow the agreed-upon guidelines. If they are found not to comply, they would lose that “certification” or “classification”. The problem lies in agreement and who will police this. …. Education has been the best method out there to date but the next step is getting this in specifications and inspectors who understand them and the growing process. A big caution is not to get growers in a defensive position. We all are Partners in Chlorophyll and need to work together for this common goal.

All responses from this current survey are available here. Your comments and feedback are welcome on this complex issue.