Silva Cells support trees and their soil while managing stormwater within a variety of landscape design projects; universities and elementary schools, housing, residential apartments, medical centers and hospitals, convention centers, green roofs, on structure, and stadiums of all kinds.

Stadiums bear a massive amount of weight, accommodating tons of building material, and gray infrastructure. Tens of thousands of people who come to events and all of their modes of transportation add to the weight and compaction of soil. Whether an action-packed football game, a concert venue, an Olympic village, or a multi-use stadium that hosts all three, Silva Cells support the soil surrounding the stadium providing green infrastructure and ecosystem services including shade to mitigate urban heat island effect, and stormwater management by holding stormwater on site for reuse.

Like people, trees need access to adequate air and water to grow strong and live a healthy life. Silva Cells provide soil volume to enable full, mature tree growth while supporting all the above ground engineering needs that plazas, sidewalks and parking lots need to enable an active game day.  The stadiums below tell a story of trees that were given soil volume to create green infrastructure with Silva Cells. 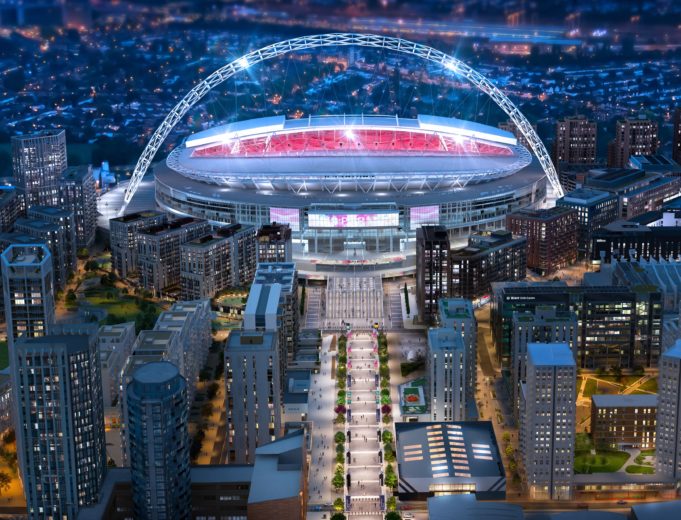 Silva Cells both support the tree roots and suspend the pavement that receives millions of footsteps from millions of visitors around the world. 900 2x Silva Cells were installed in 2017 along Olympic Way to support 36 (18 identical pairs) new trees. With new buildings constructed on both sides of Olympic Way, the original trees and old memorabilia stalls were removed and replaced with the new trees, consisting of 18 (24 eventually) different species on opposite sides of the pedestrian walkway. See the case study covering this exciting project, here. 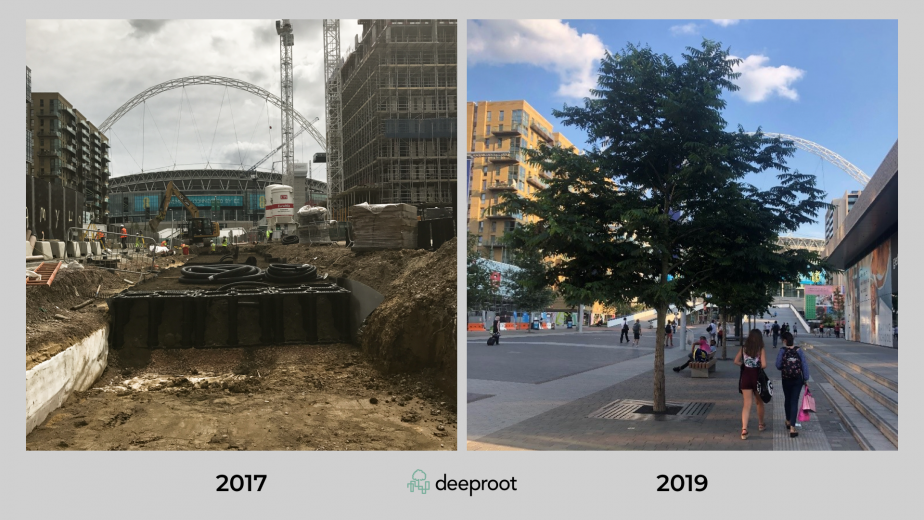 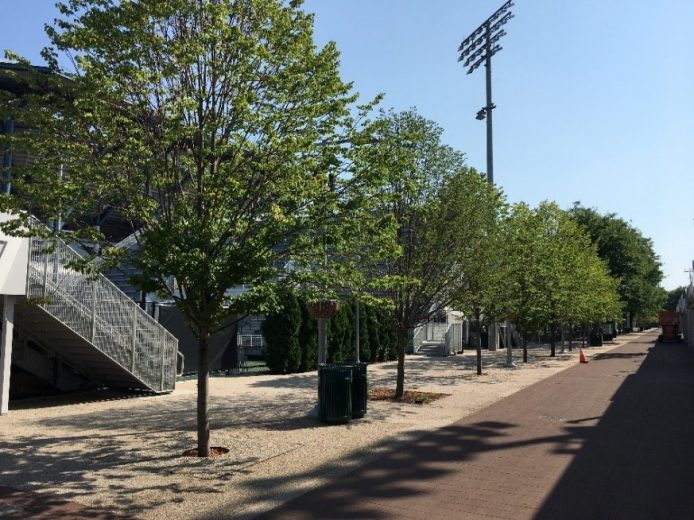 The USTA Billie Jean King National Tennis Center at Flushing Meadows in Queens, New York is the world’s largest public tennis facility and host of the US Open. To accommodate barrier-free access to a new multi-purpose venue known as Armstrong Stadium, and on the south portion of the facility adjacent to the famed Arthur Ashe stadium, RGR Landscape designed the Tennis Center campus for thousands of visitors who attend each day of the annual US Open event. The landscape reconstruction work for the plaza included approximately 120,000 sf of new pedestrian paving, several allees of shade trees with scores of Silva cells. An important aspect of the design was maximizing visibility and accessibility to the retail frontage bordering the plaza and campus. 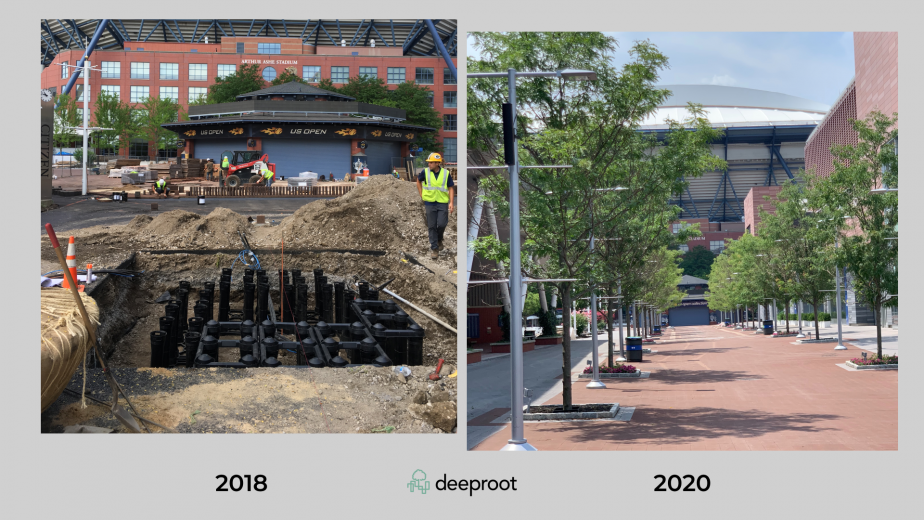 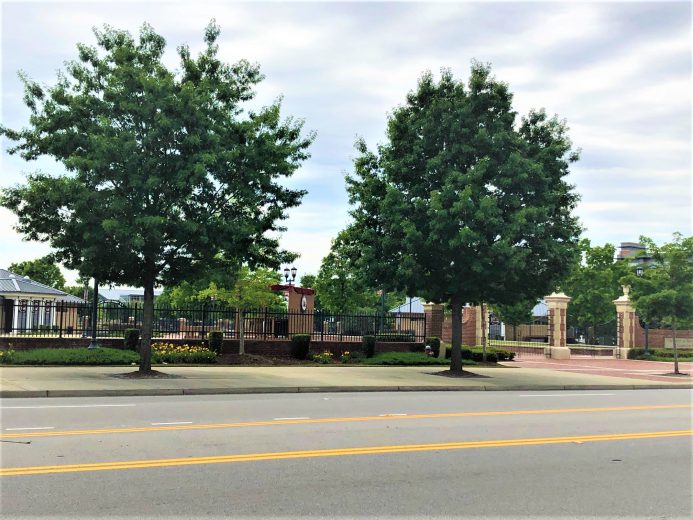 In 2020, a large part of the success of Gamecock Park as a gathering place is the result of the effective cooling measures made possible through the teamwork of the green infrastructure landscape designers and contractors, and the installation of Silva Cells. The trees have done so well because Silva Cells allow for the healthy root growth and appropriate amounts of soil volume the trees need to reach their full potential and benefit the biosphere. More on this project in the case study, here. 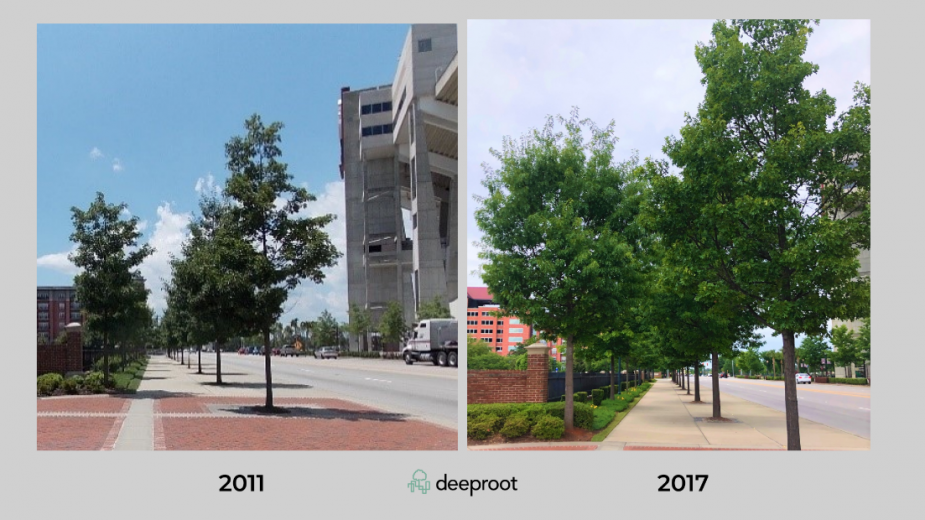 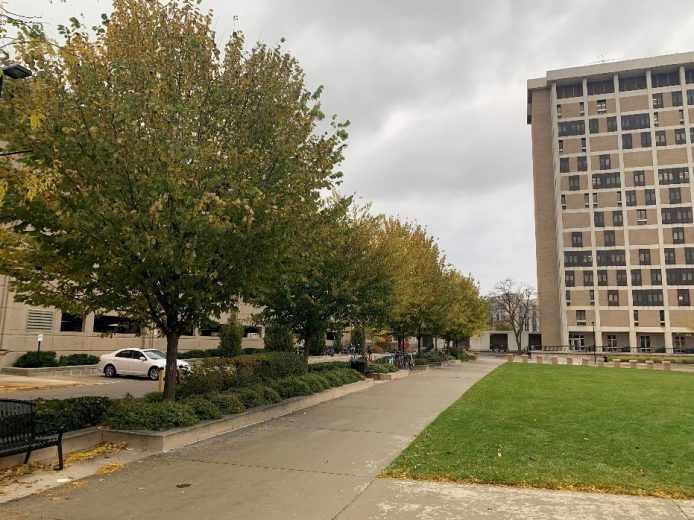 This green space nestled between the engineering building and the entrance to the stadium, Camp Randall, bustles with people on games days. The adjacent lawn hosts events and creating vibrancy and connectivity throughout the west side of campus and the stadium area of UW. The 761 ft3 of soil volume per tree has created significant growth in the stadium trees. 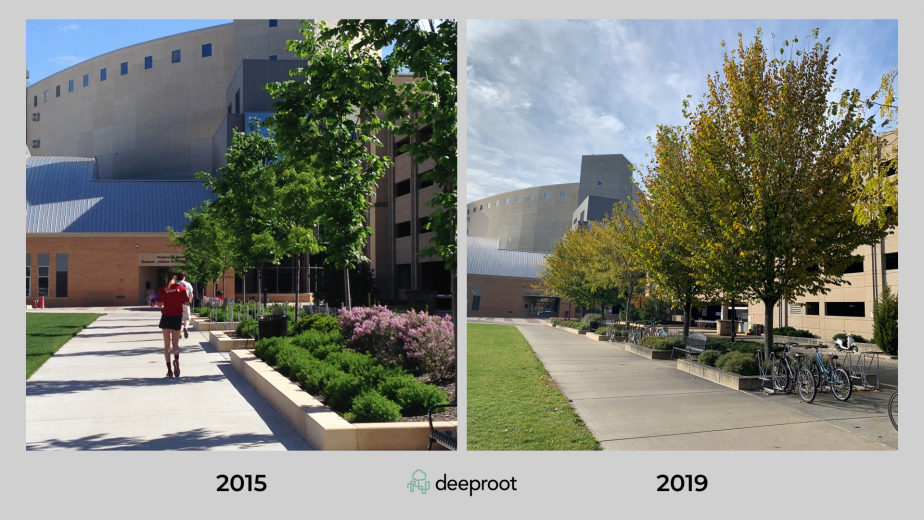 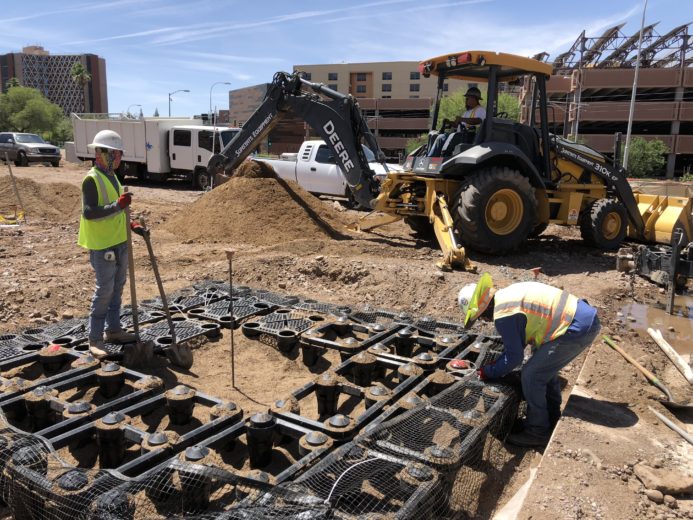 ASU’s Tempe campus instituted a master plan for landscape architecture in 2017. From the master plan came two redesign projects, both of which included Silva Cells: first, the student pavilion (known as Orange Mall), which added 16 trees; and second, the plaza at Sun Devil Stadium, which now has 19 trees. Combined there are 564 1X, 2X, and 3X Silva Cells, and 6,144 ft3 of soil volume supporting campus trees and ensuring shade. For more on the drought-tolerant tree species, the rainwater system that Silva Cell works with, and project details, see the case study. 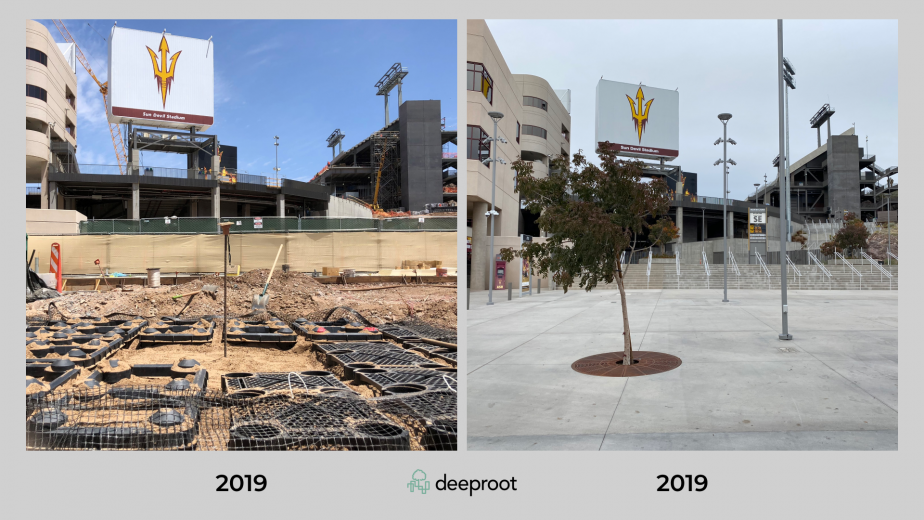 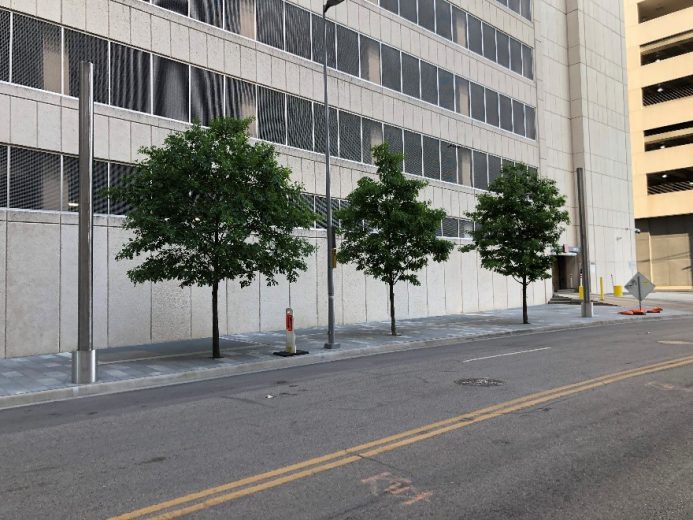 In 2013 First Direct Arena (now Leeds Arena) opened to the public hosting concerts, sporting events, seating up to 13,000 people. Surrounding the northeast border of the arena are 12 (type of) trees along Elmwood Street. Below ground is 9.6m3 of soil volume per tree due to  160 2x amount of Silva Cells to support the exponential growth. Seven years after the tree’s installation the trees have seen tremendous growth; supporting efforts to minimize heat island effect, create an aesthetically pleasing partition from the freeway and the arena, and provide a sense of place when walking to and from the arena and transportation. 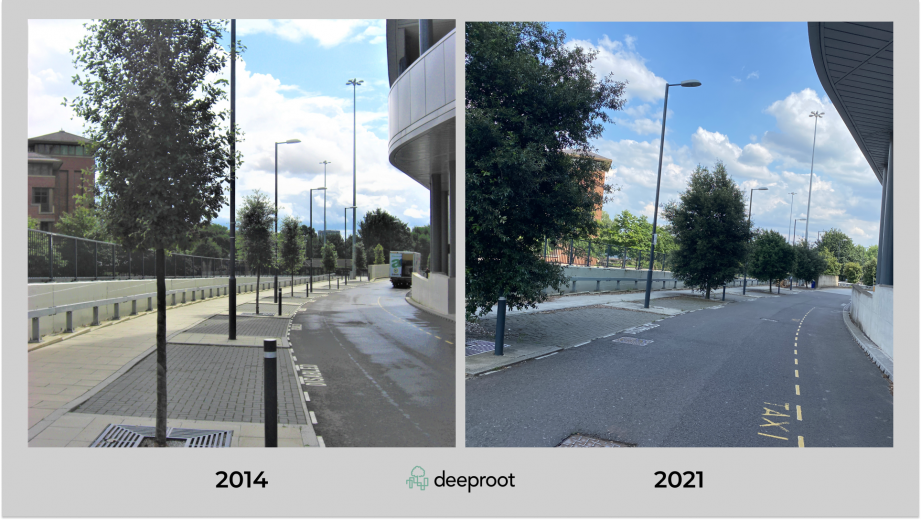 Notre Dame Stadium has been the home of the Fighting Irish of Notre Dame since it was constructed in 1930. Since then the stadium has undergone a major renovation. Void of Jumbotrons, corporate sponsors, or even fancy end zone designs, Notre Dame Stadium is a model of traditional collegiate athletics and is consistently ranked as one of the most historic stadiums in college football. Arkos Design took this ethos to design the main walkway from the adjacent parking facility to the main entrance to the stadium. A shaded allee of alternating Bald Cypress and Honey locust, among other trees, allow students and fans alike a pleasurable way to transit to and from the storied venue. 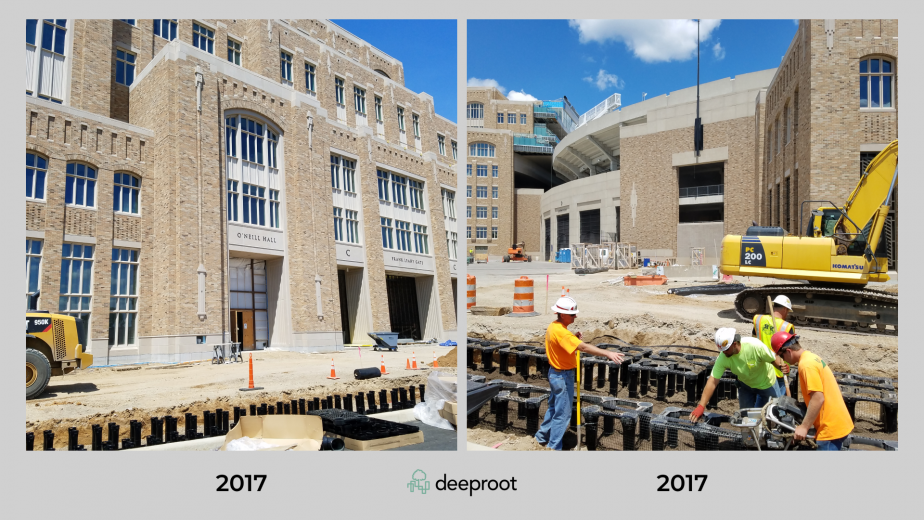 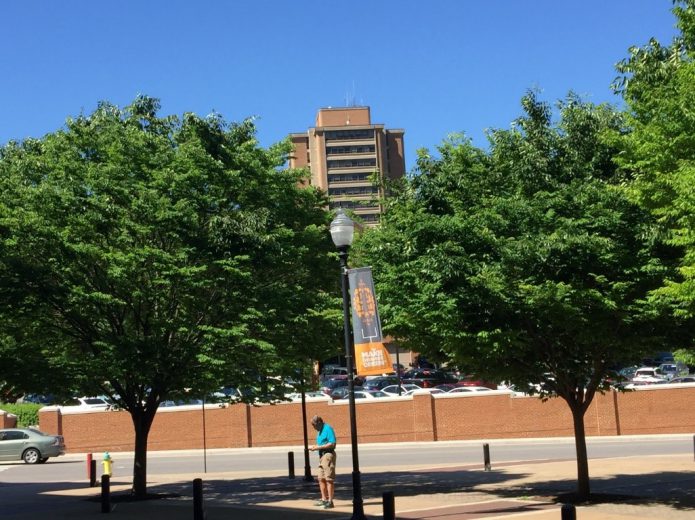 The Newyland Stadium is home to the Tennessee Volunteers football program.  Carol R. Johnson’s office designed the entryway to Neyland Stadium with a desire to create a shaded plaza for its fans. The permeable paving allows for passive irrigation and air/gas exchange for the tree root. The trees have out-performed everyone’s expectations, adding an eye-catching amount of green in a sea of orange. 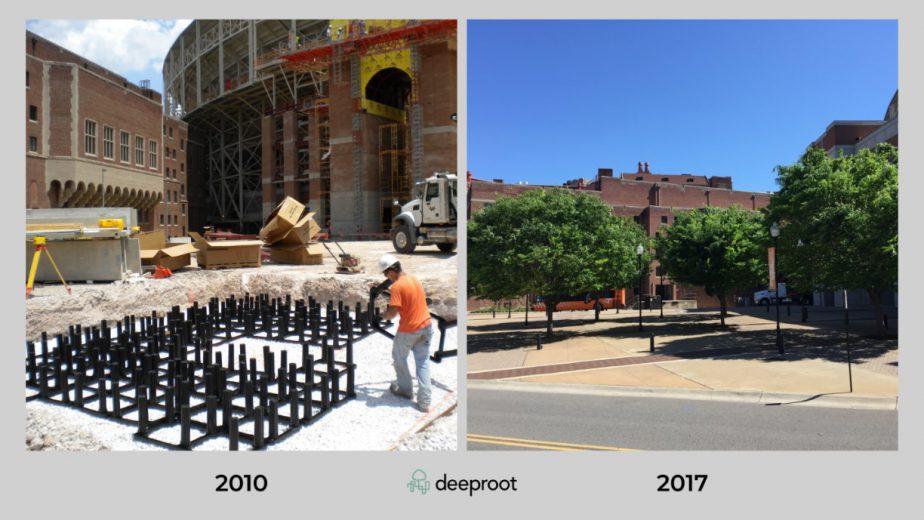