Green landscaping complete with flourishing trees keeps spaces cooler, encourages relaxation, enhances creativity, and provides stimulating, healthy air to breathe. It is especially crucial to have green infrastructure throughout academic campuses. Whether the institutions are for elementary students or those earning an advanced degree, strong, healthy trees create an atmosphere of safety, security, and calm for pupils of any age, to optimize learning. Silva Cell has been at the root of over 150 education projects across North America and Europe during the past decade. Of the hundreds of college and university projects with Silva Cell installations, most are in plazas. However, some campuses devise entire master plans around tree infrastructure. Whether through a plaza or campus masterplan, or a preschool courtyard, Silva Cells are deeply rooted in the infrastructure of educational institutions around the world. DeepRoot hopes that our soil cell technology and the implementation of green infrastructure at schools and universities serves as a starting point for education on climate and environmental change. All the best to all students for a safe, engaging, and productive school year! 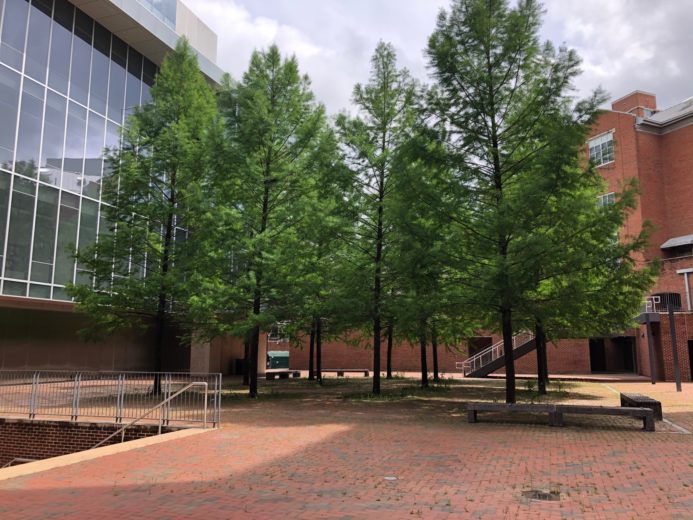 The trees in the plaza space were dubbed the “central park” by designer Hoerr Schaudt. The trees replaced an existing parking lot with a sloped open space and helped seamlessly integrate the new Genome Sciences complex into the campus. The park connects the north campus and the medical school and provides attractive pedestrian access. Granite retaining walls and a water feature make a welcoming, appealing space for large and small gatherings, such as those before and after football games held at nearby Kenan Memorial Stadium. Below the trees and stone seats are 750 2x Silva Cells that have ample soil volume, exactly 700 ft3 each. 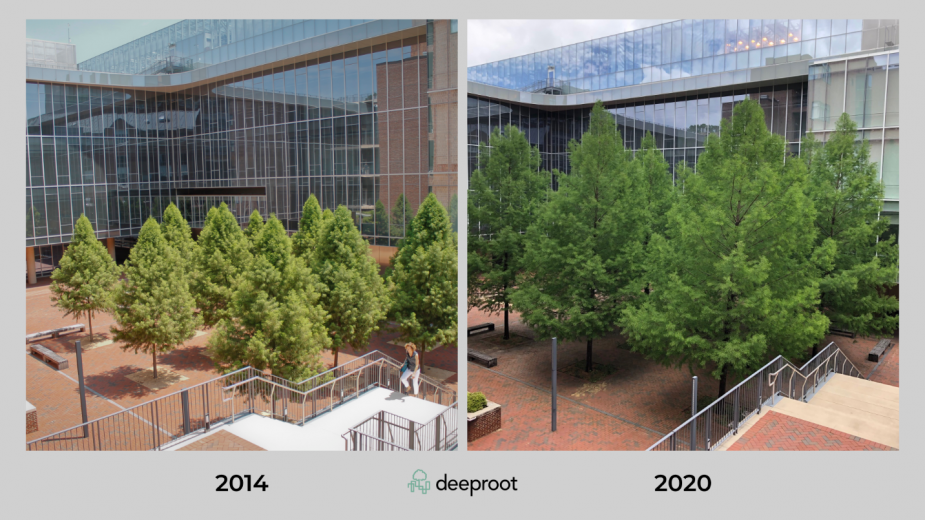 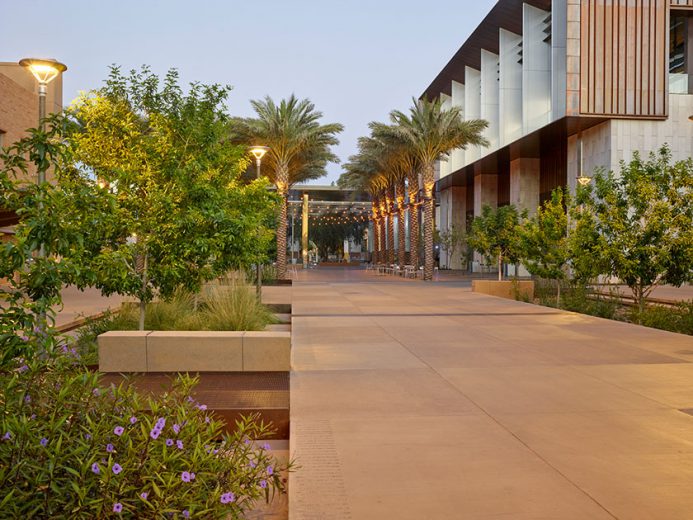 ASU’s Tempe campus instituted a masterplan for landscape architecture in 2017. From the masterplan came two redesign projects, both of which included Silva Cells: first, the student pavilion (known as Orange Mall), which added 16 trees; and second, the plaza at Sun Devil Stadium, which now has 19 trees. Combined there are 564 1X, 2X, and 3X Silva Cells, and 6,144 ft3 of soil volume supporting campus trees and ensuring shade. For more on the drought-tolerant tree species, the rainwater system that Silva Cell works with, and project details, see the case study. 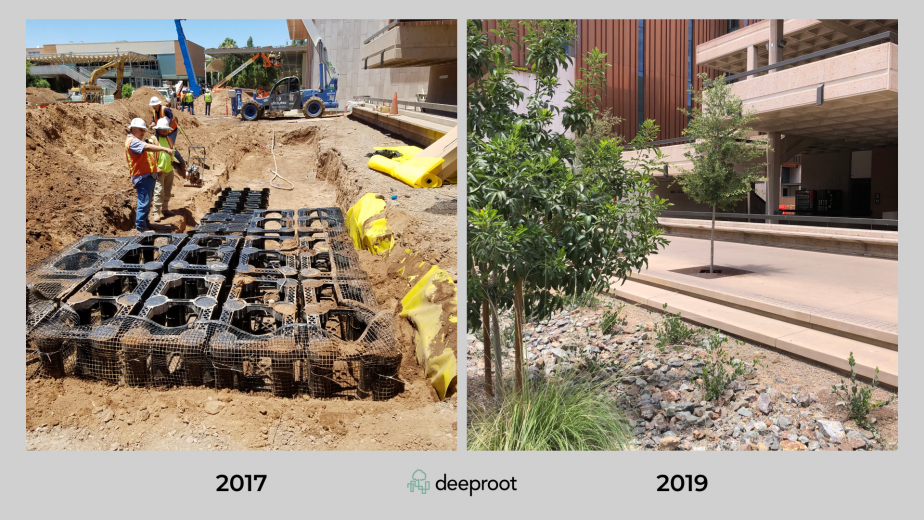 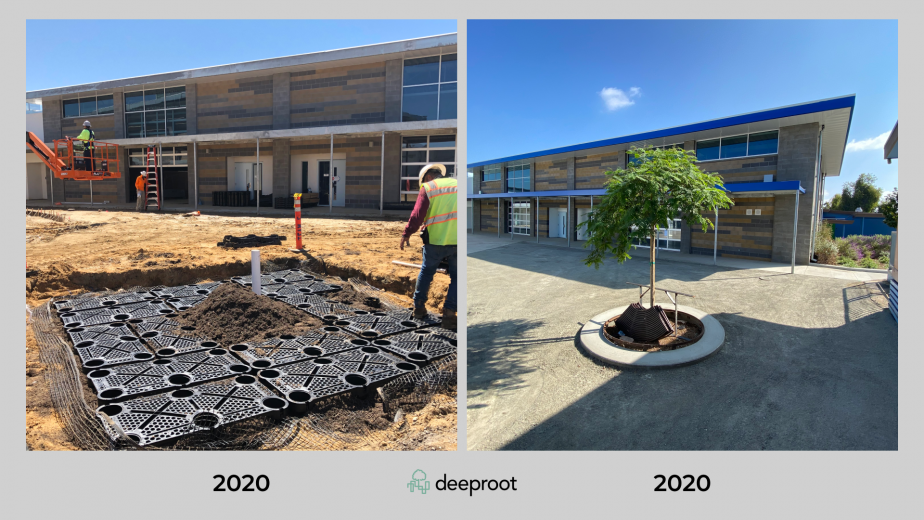 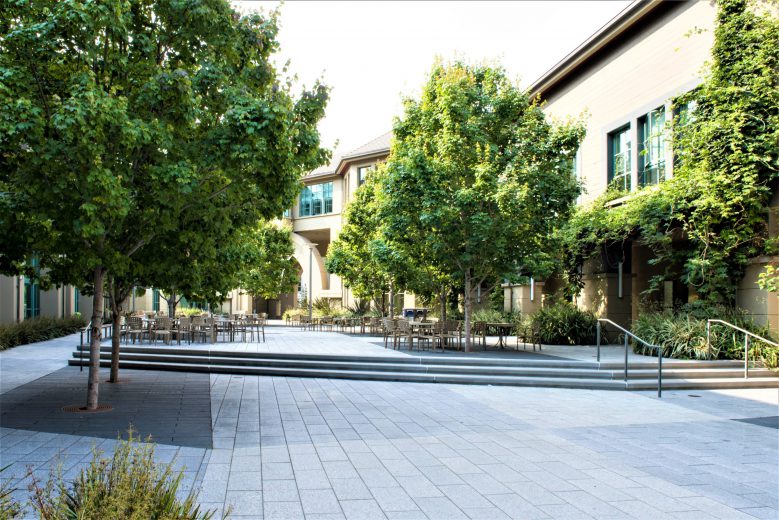 The renovated plaza at the Haas School of Business has 12 trees and an increased usable surface area that complements and facilitates the institution’s evolving mission toward collaborative and progressive business education and community building. Below this new space lies an innovative two- and three-layer systems of Silva Cells that has nurtured the trees for eight years as well as provided stormwater management in compliance with the ambitious regulations of the university. 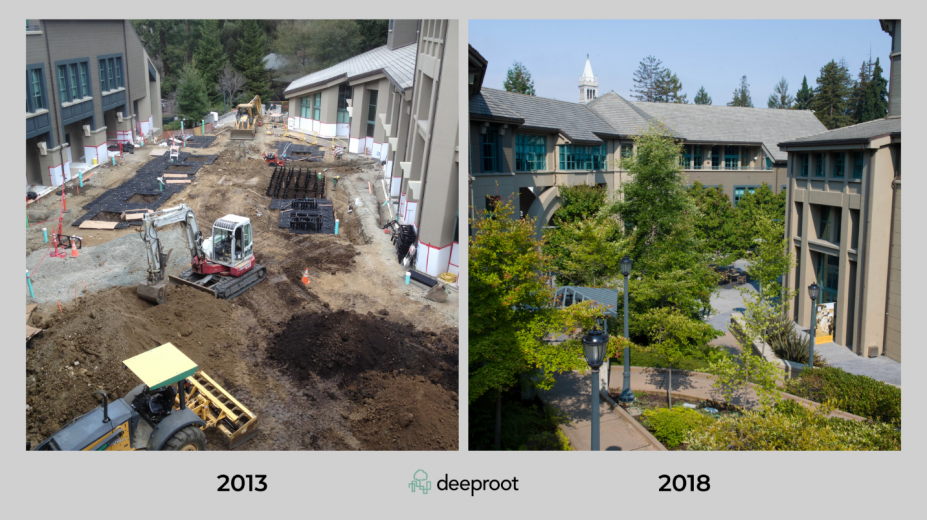 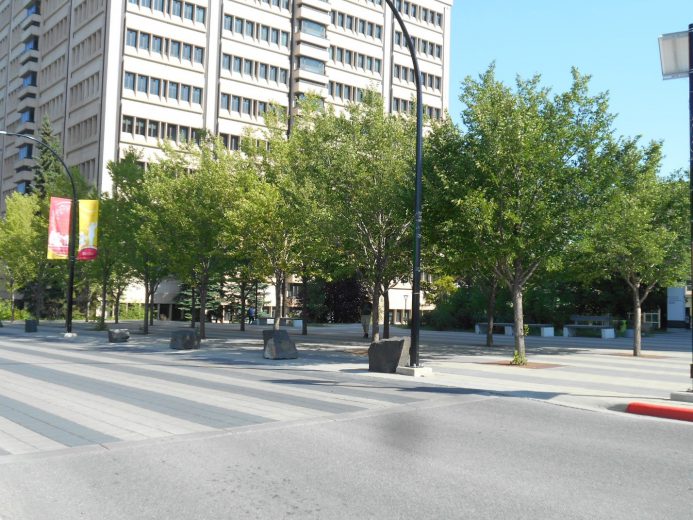 The University of Calgary EEEL Building plaza is a connection between the Engineering Building and the rest of the campus as well as a visual counterpoint to the building itself. Two rows of nine Aspens with 11m3 of soil per tree frame a walkway through the plaza, providing shade that visually balances with the Engineering building across the street. 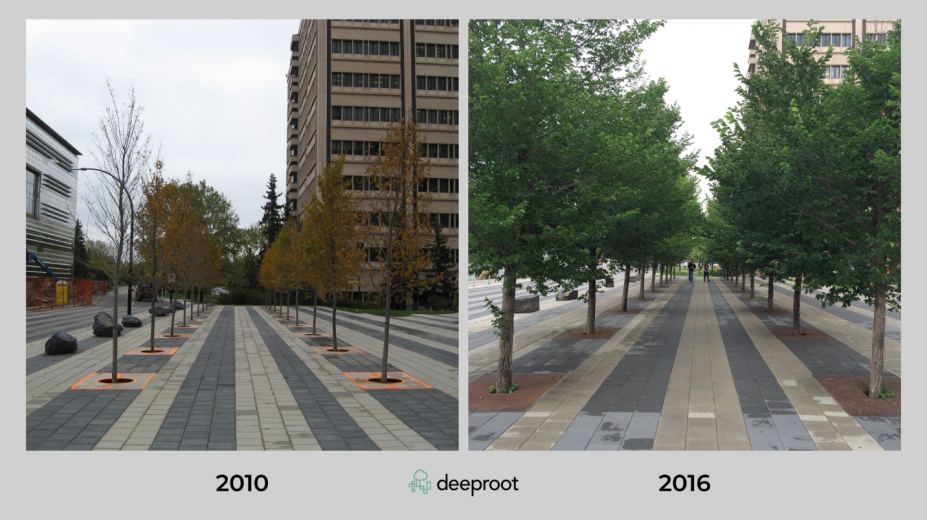 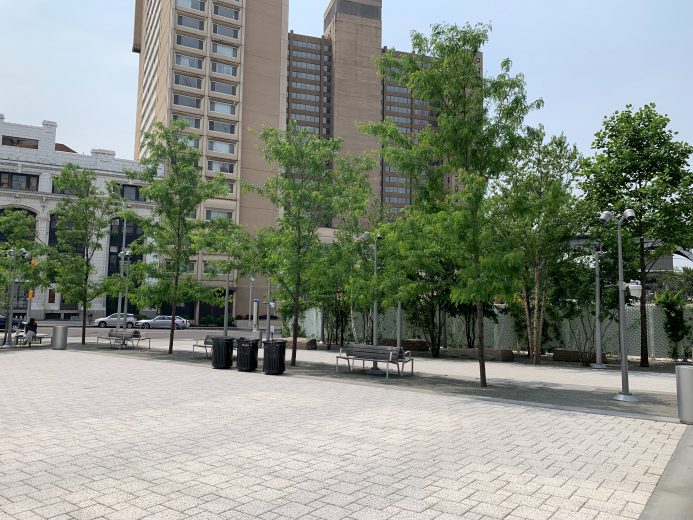 Landscape architect James Corner Field Operations designed the open space system and public squares for Columbia University’s new Manhattanville campus, a 6-acre master plan. The campus was awarded the 2019 Urban Land Institute New York (ULI NY) Award for Excellence in Institutional Development, ULI New York Awards. Campus open spaces are accessible by the public, offering seating and free Wi-Fi, as well as space for public gatherings and performances. All streets of the existing street grid remain open and more publicly inviting with widened sidewalks, trees, street lighting, and street furnishings. Such an undertaking would be incomplete without trees to shade the public spaces, including the large square and woodland walk adjacent to the Jerome L. Greene Science Center and the main public square of the campus. 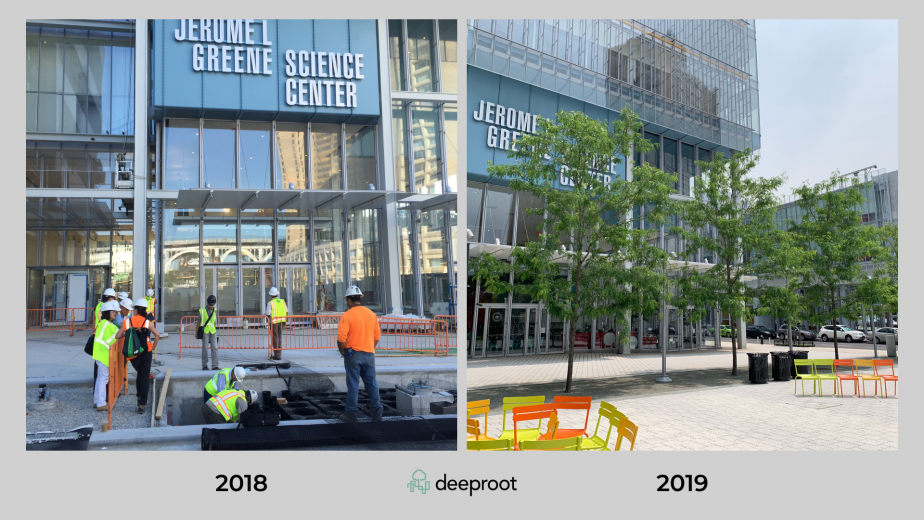 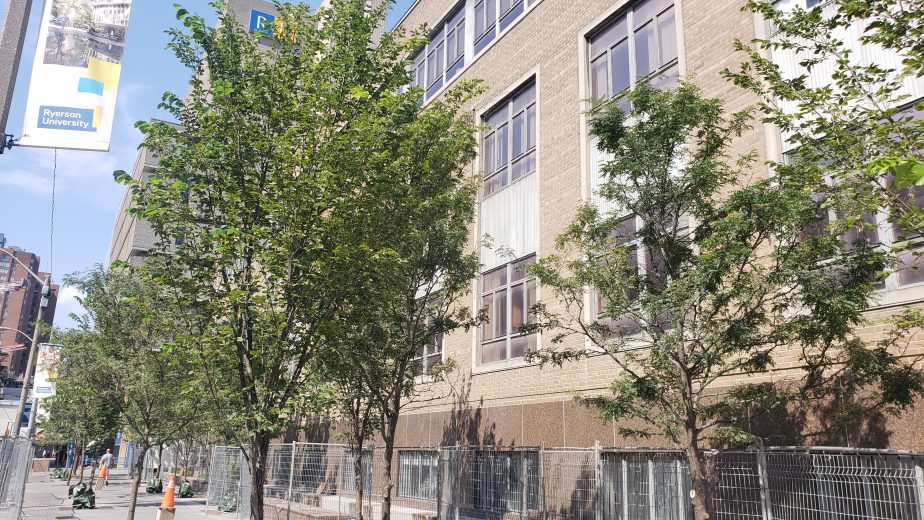 Elm and Red Oak were planted along Nelson Mandela Walk and Gould Street, part of a broader plan to introduce native species, diversify, and double the number of trees at Ryerson University. The Silva Cell installation on Gould Street near the university provided generous space for DeepRoot systems to nourish trees. The Planning Partnership delivered a stellar and visionary design while Rutherford Contracting executed the actual installation of 800 stacks of 3X Silva Cells.The entire street has now been transformed to one devoid of vehicular traffic and strictly dedicated to pedestrians, attractive to retail, intellectual, and social interactions within a cozy, vibrant, and natural shelter of 20 trees. 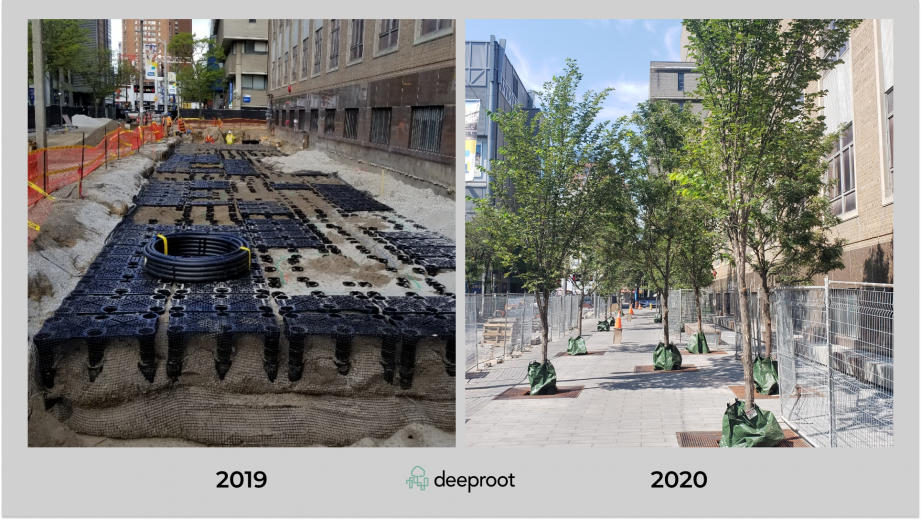 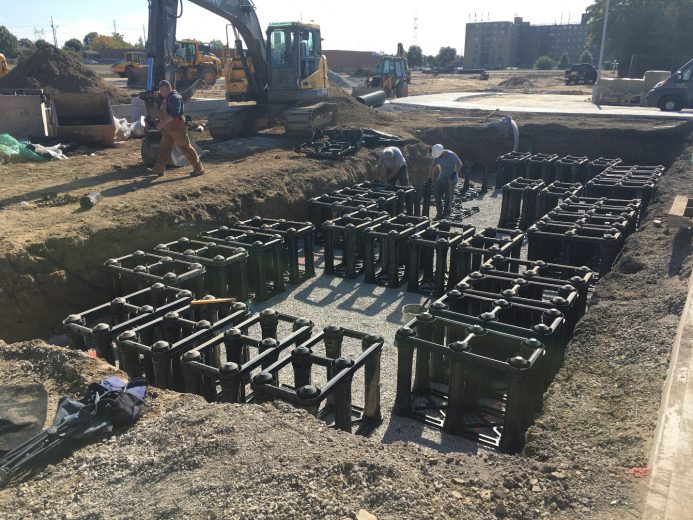 The new Lawrence Midland Secondary School has evolved from the merging of two distinct high schools in Scarborough, Ontario. Many students will be welcomed back to class with impressive sustainable features that include a green roof, Toronto Green Standard Tier 1 rating, energy-efficient lights, natural day lighting, enhanced tree canopy covers, and durable building materials. A collection of trees in the front courtyard bolstered by Silva Cells adds to the bold and warm welcoming statement while complementing the sleek architecture of the building. 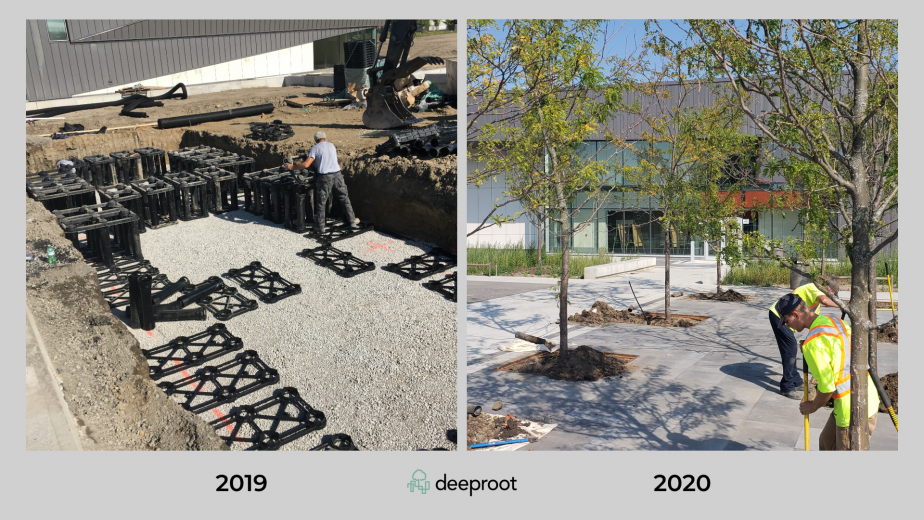 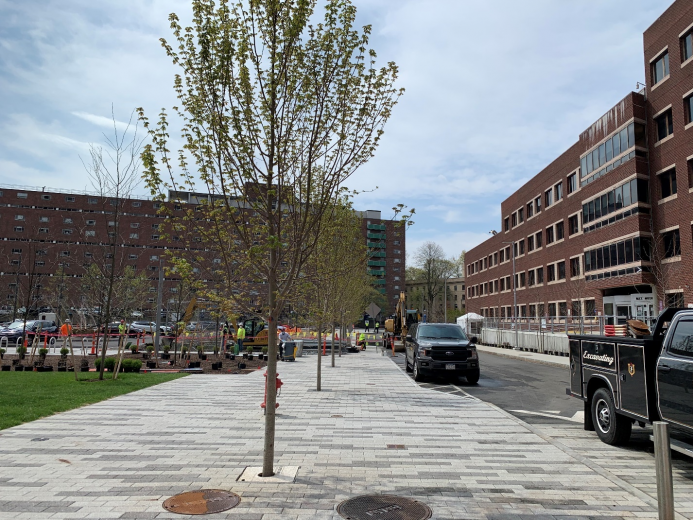 The Kendall Square Initiative is a vibrant mixed-use district featuring six new buildings on what were previously parking lots in the MIT East Campus area. The project leverages the status of Kendall Square in Cambridge, Massachusetts, as a recognized international hub of scientific and technological innovation to bring what is “inside” out into the public realm. The space is conceived as a daily open house to showcase the work occurring within MIT as well as adjacent lab, research, and development spaces. Hargreaves and Jones designed the public realm to be the comprehensive new focal point of MIT. There are two new buildings for research and development; two for housing; one for retail and office space; and the creation of more than 2.25 acres of new or redeveloped public ground-floor spaces. Additionally, 3 acres of open space provides the public with connectivity for the renowned institution. Plazas featuring over 1,400 2X Silva Cells supporting healthy loam trees offer a daily respite for Kendall Square’s broad range of visitors. The project, located on MIT’s famed “Infinite Corridor” vastly improves this campus thoroughfare, providing places to sit, recreate, or participate in daily activities of the institution. 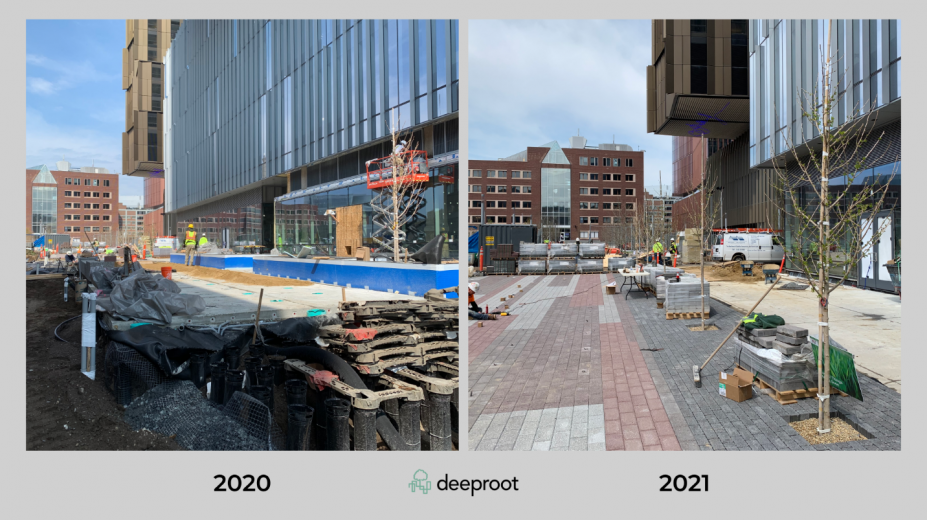