Good design preserves existing trees during a development project. However, the most tree-sensitive design will not be enough if tree-friendly building practices are not in place. Many times a tree that was damaged during development may not show symptoms of decline for a few years, so the cause and effect is often not obvious, unless an arborist is consulted to determine the cause of the decline.

Most damage to trees occurs underground in the form of soil compaction or root losses, so it is the soil we most need to protect. How much soil? To review, the Tree Protection Zone radius (TPZ radius) is generally calculated at 12 inches (30.5 cm) for every one inch (2.5 cm) of trunk diameter as measured at 4.5 feet (1.3 m) from the ground. A smaller TPZ radius such as 10:1 may be used for young, vigorous trees, while an older or stressed tree may require a larger TPZ radius such as 18:1. 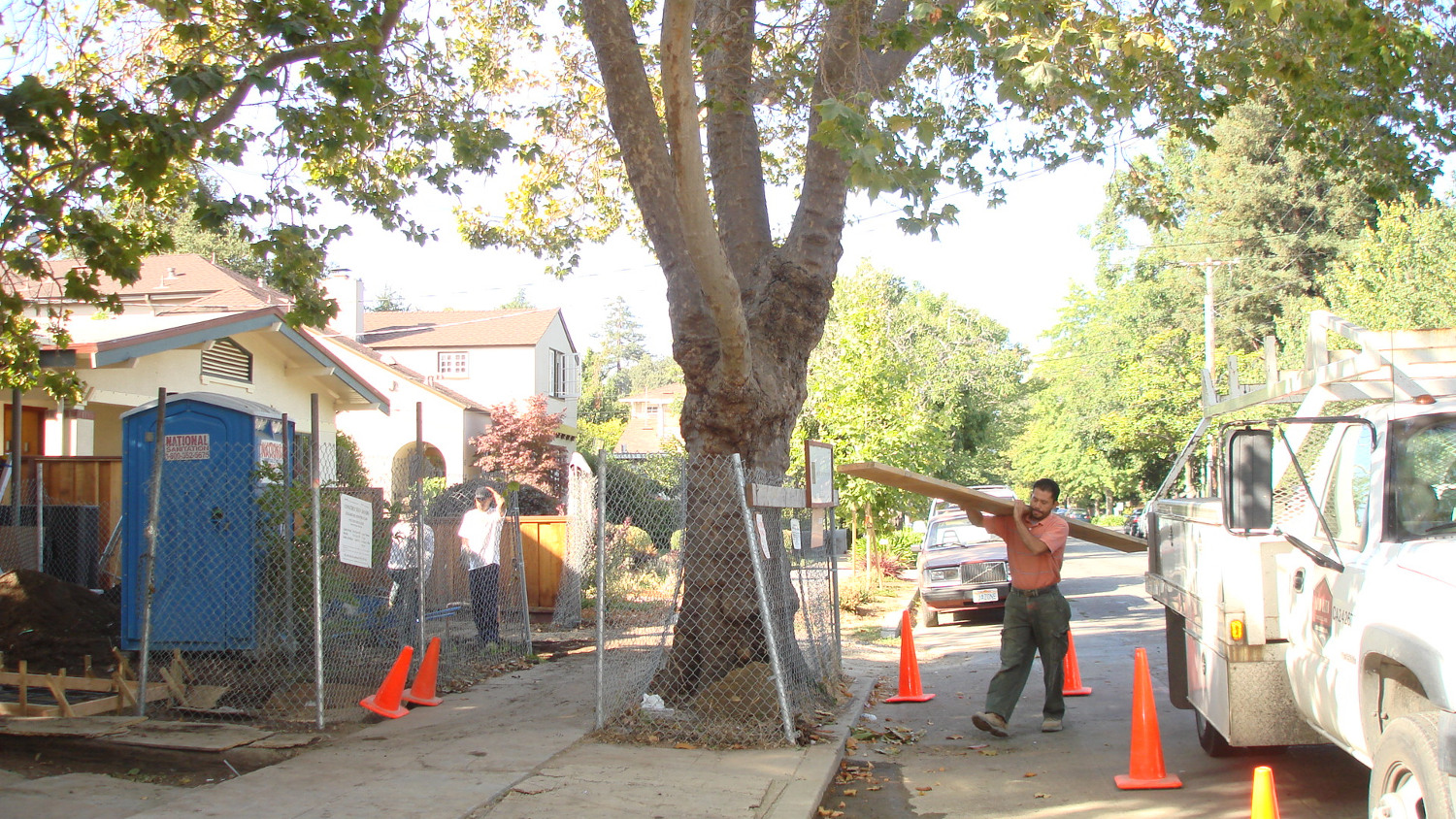 Thick, woody structural roots holding the tree up can be found closer to the trunk, within the top 2 to 3 feet (0.6 to 0.9 m) of the soil. Removing these can render the tree hazardous. Fine roots that take up water and nutrients can extend beyond the width of the canopy and are found within the top 6 inches (15 cm) of the soil. Even a shallow excavation or cut will negatively affect the ability of the tree to nourish itself.

Although the project design may be low-impact to existing trees, the act of building the project will require more space than the final footprint of the structure. Excavation tailings need to go somewhere, and equipment and supplies must be staged nearby. If trees are located in the middle of the project, their TPZs are going to see some action. How can we utilize the space efficiently while building is going on and still protect soil and roots? Some typical strategies recommended by arborists are listed below.

Fencing delineates the area that requires protection and signifies that work within the fence will be done differently. For this to be effective, the fence has to be substantial. Squishy orange snow fencing or string wrapped around rebar won’t cut it. The City of Palo Alto, California shares their specifications for TPZ fencing online:

All trees to be preserved shall be protected with five or six (5’ – 6’) foot high chain link fences. Fences are to be mounted on two-inch diameter galvanized iron posts, driven into the ground to a depth of at least 2-feet at no more than 10-foot spacing.

TPZ fencing can outline a single TPZ, a collective TPZ for groves of trees, or the outline of a tree well or planter strip in a paved area. 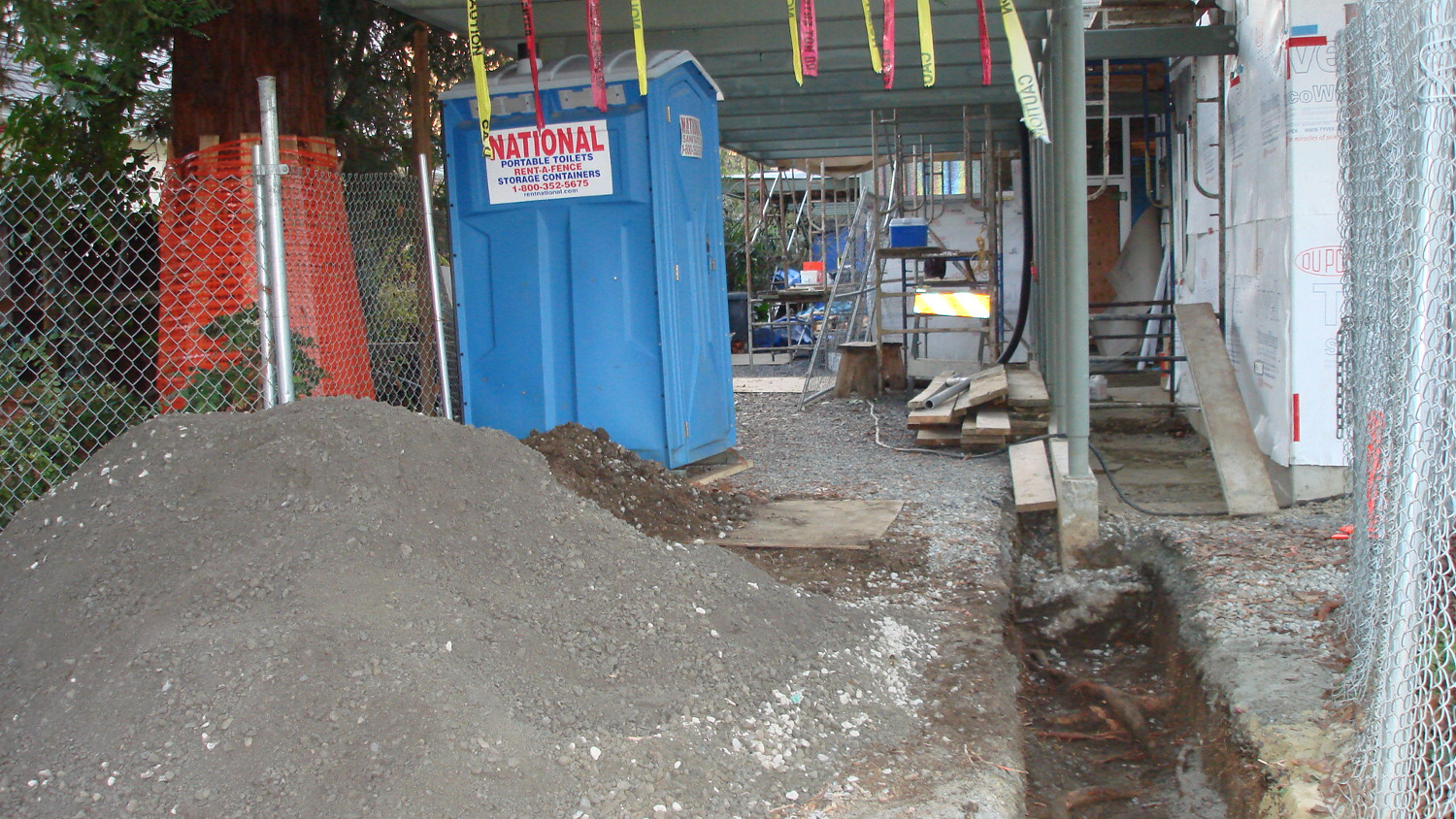 The root buffer on this project prevented compaction while allowing for materials storage and siting of the Porta-potty very close to a tree.

Root buffers protect soil from compaction. They should be installed to cover TPZs prior to the beginning of the project and removed as soon as possible after the development is finished. Here is a good root buffer “recipe” from the City of Palo Alto:

It is very important to specify how the root buffer is constructed and removed: If a Bobcat is driving on unprotected soil to lay down or scrape up the chips, gravel, and plywood, it will compact the soil and defeat the purpose of having a root buffer. Wheels of the equipment need to remain on existing pavement or on the root buffer itself at all times. Even if this is specified in a Tree Protection Plan, it is the kind of detail that is often missed if an arborist is not present on site while the root buffer is being installed or removed. 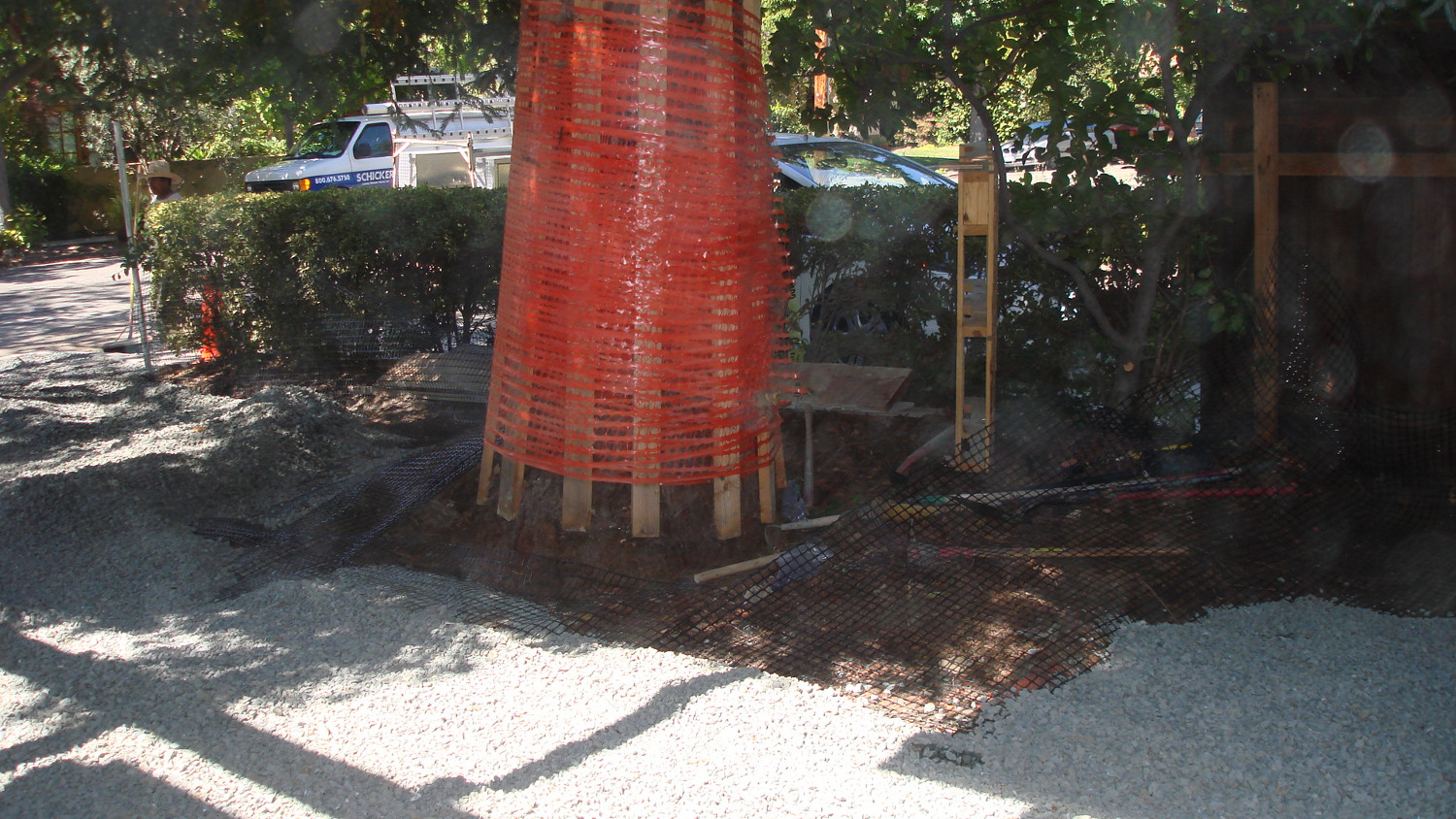 Not all root buffers need to be constructed: existing pavement is very effective as a buffer. Retain existing pavement as long as possible, even if it is slated to be removed or replaced, because paved areas can safely be used for storage and staging. The soil under the pavement is already compacted and a mature tree has adapted to these conditions over time.

If work must take place within the TPZ, or the space is needed for storing or staging, wrapping the trunk will prevent injury. Wrap the first 6 feet (1.8 m) of the trunk with one of the following:

A plywood box can also be built around street trees to protect both the trunk and soil.

The City of Palo Alto, California has put their tree protection ordinances, standards and specifications online in a single document called the Tree Technical Manual. The manual can be freely downloaded and shared to help arborists, designers, planners and contractors create their own project specifications and municipal ordinances. This is a wonderful free resource that I have used many times. 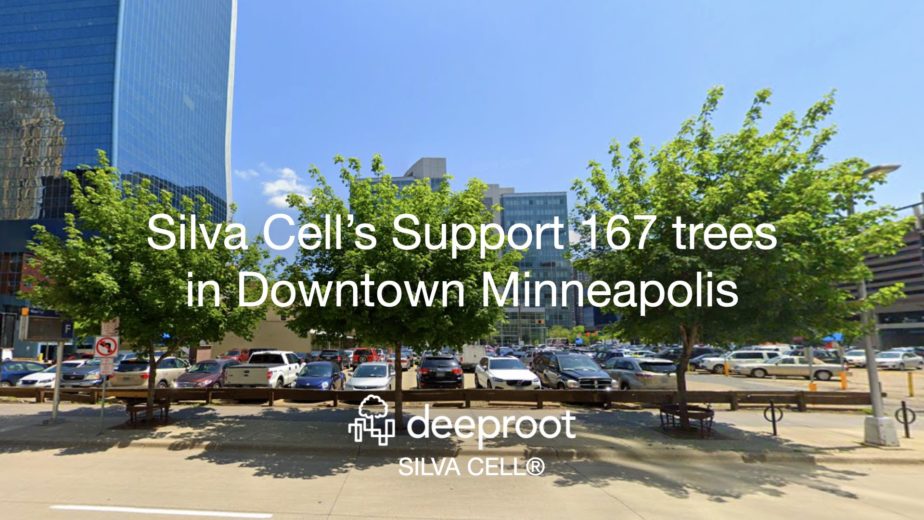