Today I had the privilege of talking to Austin Troy, Professor and Chair of the Department of Planning and Design at the University of Colorado Denver. He recently presented preliminary results of his research on â€œThe Effect of Urban Tree Canopy on Microclimate and Heat Islandsâ€ in a webinar and I was interested in learning more about it. Dr. Troy worked with graduate student Medhi Heris to complete the analysis and number crunching on the research described here. Below is a summary of our conversation. Â â€“Nathalie Shanstrom

Could you briefly explain what the urban heat island effect is and why it is important?

Cities tend to retain heat more than their surrounding areas because of their hard surfaces. Hard surfaces absorb tremendous amounts of heat and gradually re-release it overnight, so the biggest temperature difference between the city and surrounding areas is at night. The more hard surfaces there are, the more intense the heat island effect is. It is especially pronounced around large concrete surfaces like highways.

How do trees help offset the urban heat island effect?

They help in three different ways:

First, trees lessen the urban heat island effect through direct shade: with a tree, only a fraction of the energy actually hits the area under the tree canopy. Second, they store less heat and return heat back to atmosphere faster than concrete, so they are less of a heat sink. Finally, trees cool their surroundings through transpiration, a process that cools the air by using heat from the air to evaporate water.

What were the main questions your research aimed to answer related to the effects of trees on the urban heat island effect and what did you find?

We know itâ€™s better to have trees in bigger patches until a certain point, we think up to about 5,000 square meters (1.2 acres). Beyond that, each additional tree helps but it doesnâ€™t matter if itâ€™s in the patch or not.

It gets complex, and there are advantages to different pattern types. If you just have individual trees spread out, you lose a little bit of the benefit, but they can provide shade to more houses . If they are somewhat clumped, you get more impact on the urban heat island effect, but less shade to individual residences and businesses. 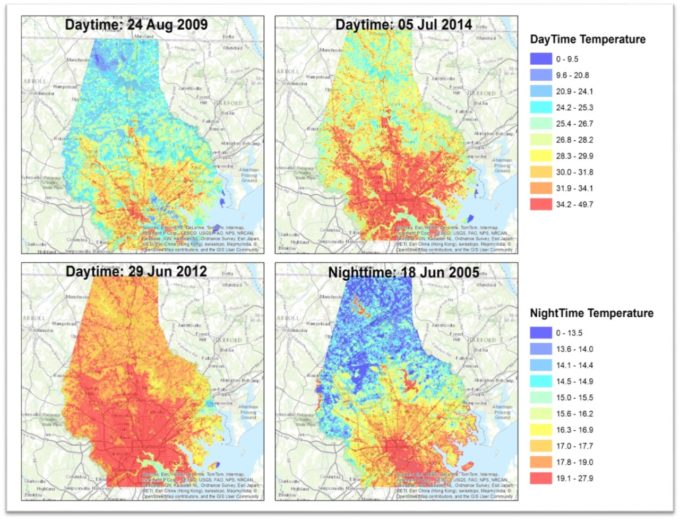 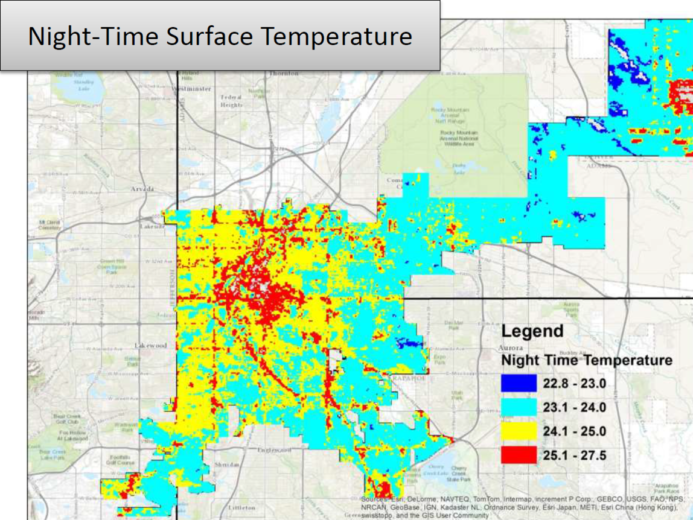 Could you explain the magnitude of the potential effect of trees on the urban heat island effect?

As an example, we compared the urban heat island effect in Denver, CO and Baltimore, MD.

Denverâ€™s heat island does not look as intense because its surroundings are mostly prairie grasses and not a lot of trees. The only natural trees are in riparian areas and above 6,500 feet or so. Trees follow the city. When you build a city like Denver you are adding impervious surfaces but also adding way more trees than would naturally be here. So the urban heat island effect is less pronounced. Denver had a big tree planting renaissance about 100 years ago. They planted maples, ash, and lindens — all trees that would not naturally be here, especially in residential areas. So these areas have way more shade than would naturally exist.

What are the main takeaways for tree advocates?

The urban heat island causes added electrical load for cooling, added water loads, and negatively impacts health and comfort. Trees can help mitigate those negative impacts where they are feasible and there is sufficient water to grow them. They make a lot of sense in Denver, for example, especially when you also add all the other benefits of trees, like positive impacts on stormwater management, greenhouse gases, and property values. 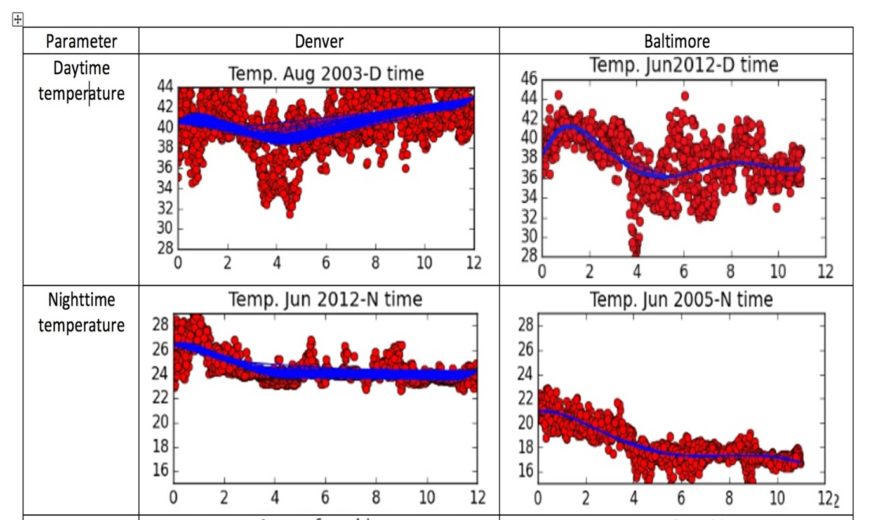 What are the main takeaways for urban foresters and planners?

Iâ€™d urge them to consider the benefits on two scales: both the metro scale through more regional scale heat island effect mitigation benefits, and the micro scale climate level benefits on a house, through direct shading. Benefits at both scales are related and overlap.

In our comparison of Denver and Baltimore, Baltimore has more trees, but Denver has more trees shading buildings. The trees in Denver are planted more intentionally to shade individual houses, whereas many of the trees in Baltimore are in parks.

What do you think are the most critical unknowns regarding the effects of trees on the urban heat island effect?

There are two most critical unknowns that come to mind.

First, the issues around the effects of climate zone and ecoregion, for example weighing all the effects of adding trees to urban matrix in regions where there would not naturally be trees.

Are you planning any further research on this topic?

We are coming up with a way to model shade from trees in three dimensions. Landscape Architects often model shade in a 3D program like Revit, but this has never been done on a city scale. We have the technology to do it now, and have run a model for a few neighborhoods. This will be valuable because it will allow us to understand more accurately the urban heat island mitigation effects trees are providing to a whole city.

We are also finishing our research on pattern metrics. And lastly, weâ€™re looking at the impacts of trees for a city like Denver where trees follow the city, given that they are nonnative — questions like, how many trees do you need to offset the impervious surfaces you created? We also want to understand the water budget of the tree canopy. There is lots more to learn.

Thanks, Austin! If you want to read more about his work, you can do so here.