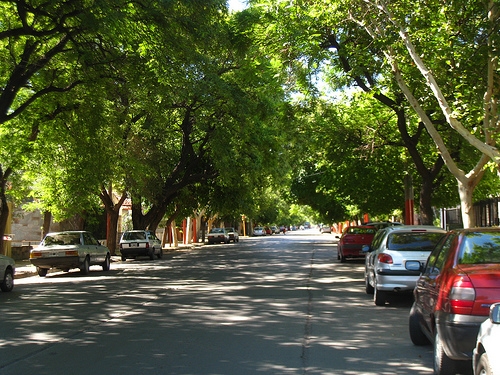 There’s more to street tree selection than just good looks (although of course we all have our favorites.) Rooting behavior, disease resistance, projected size and flower/fruit type are just a few of the factors that affect what we plant and where. Somehow we’ve still ended up with only a handful of trees species that are typically planted in cities, but that’s a topic for another post.

Street trees are commonly cited as an important tool in mitigating some of the effects of climate change, but will our selection criteria have to shift in order to adapt to the accompanying shift in weather conditions?

Helmuth Ziegler wrote about this recently for the Sustainable Cities Collective. Klaus Körber, of Bavarian State Institute for Viticulture and Horticulture in Veitshöchheim, Germany, is conducting research to see just what the ideal tree is for weathering (har har) these changes.

In the German town of Würzburg, BSIVH has a five acre test plot populated with 450 trees. According to Körber, they will “have the opportunity to observe, compare and evaluate the reactions of 130 different tree species to certain weather conditions for years and in one area.” According to Ziegler’s original article, there are similar projects underway in three other Bavarian towns.

In Germany and surrounding countries, climate change is expected to bring milder winters and summers with less precipitation and more heavy rainfall. The number of hot days (not sure how they define that — maybe just days with above average temperatures?) is anticipated to increase up to 20%. Of course, the effects in different cities and towns will vary.

What does this mean for trees? According to Körber, more problems related to drought and heat stress. He sees the following characteristics as some of the most important to evaluate when considering street tree selection under these conditions:

• a firm fastening in the ground by a strong root system,
• the danger of wind damage and falling branches,
• the regeneration by shoots after storm damage and
• an extensive root system to prevent soil erosion.

Says Körber, “For the city trees of the future, it will not be about which species have been growing here before, but what types thrive right under the changed conditions and work good as the green lungs of our cities in the long run.”

USDA Forest Service research indicates that large trees make an exponentially greater environmental impact than small ones. There’s no doubt that urban tree selection and cultivation must play a bigger role in city design — and solutions that create forest-like growing conditions will be critical to their longevity, maturity, and overall success.