All areas of study and their industries have to cope with inaccurate but often widely accepted mythologies, and arboriculture is no exception. There are a few of these that we encounter again and again. We’ve already busted the myth that tree roots don’t grow very deep, but here’s another one: do deep soils increase the risk of anaerobic conditions?

Anaerobic conditions are most created by overly wet soil or by the presence of root-rotting organisms, and are not caused by soil depth alone. When water does not have the ability to drain from the soil, fresh oxygen cannot be pulled in. This results in the soil’s biological functions, decomposing organic matter, and tree roots using up all the available oxygen. (This is different from low oxygen soils, where water leaves the soil, but too slowly). Therefore, anaerobic conditions can occur at any soil depth. Roots generally need about 10% oxygen in order to grow. Creating a planting area using healthy, lightly compacted soil with adequate drainage should make the risk for anaerobic conditions extremely low, regardless of the depth.

The best way to assure that higher levels of oxygen get into the soil is to provide a drain line that has a positive flow towards an outfall. This will increase the rate that water drains out of the soil above the drain invert. If the soil around or under the planting soil drains slowly (say 1/8″ per hour) and it is not possible to get an invert low enough to get the water out the bottom of the soil profile, the drain line can be placed at a higher level in the soil profile, and soil below the drain line can have a positive impact on the tree. At that drainage rate the soil may have low oxygen at some times of the year, but make a positive contribution during others. 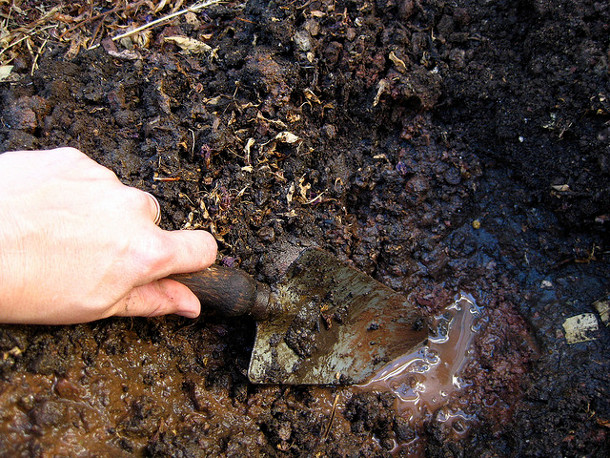 When using a suspended pavement system in an urban context, where space is extremely limited, excavating deeper is often the only viable option for providing trees with the soil volumes they need. Once the soil is installed it’s compacted to below 85% Proctor. Over time the it will settle somewhat, but since the structure – not the soil – bears the load of the pavement, it will remain within acceptable densities for root growth. Most soil will not settle to above root-liming density in the upper soil — the exception to this is fine grained silty soil that have been heavily screened or pulverized, a common process.  That is why we recommend using soils that are screened through a 2″ screen rather than the standard 3/4″ or 1″ screen.

Loosely compacted planting soil also permits greater respiration during weather cycles and increases the rate of drainage through the soil, provided there is an outlet for the water to flow to. With a good quality loam soil and carefully considered site hydrology, water should infiltrate and percolate through at a rate that prevents excessive standing water, thereby minimizing the chances of overly wet conditions. Just to be safe, our projects usually include an overflow pipe to channel any excess water away.

Some consultants advocate placing a drainage layer of either stone or sharp sand in the bottom layer of Silva Cells when using a three layer deep system. Not only is this unnecessary, it may actually be harmful. Soil texture is a critical element of effective water infiltration and percolation, and abrupt interfaces between varying textures such as loam and sand can lead to slower drainage and aeration. According to the International Society of Arboriculture, “placing gravel in the bottom of planting holes, pits, or containers does not improve drainage, as commonly thought, because water remains in the finer-textured soil above it until saturation is complete.” Saturated soils are not a problem if they release their water in a reasonable period of time.

A  two-deep Silva Cell system (36”/800 mm) is the most common installation we have, but the Cells can be stacked as deep as three (54”/1200 mm) – and in fact, because of the way decks and frames are priced, this is the most economical option. Still, few people opt for it. That could be due to the fact that excavating deeper is not always an option, but a three-stack should not be discounted for fear of creating anaerobic conditions.

Hydrology is a critically important part of site design for trees and other plants. If soil around the planting soil drains adequately, or a drain line is installed, the depth of the soil in the system will not cause anaerobic or low-oxygen conditions. If you are using a suspended pavement system to provide soil to trees, it’s best to use all of your available space for soil – rather than sand or rock that will improve neither drainage nor aeration, and which tree roots certainly cannot grow in.