Why You Don’t Need To Replace Organic Matter In Soil 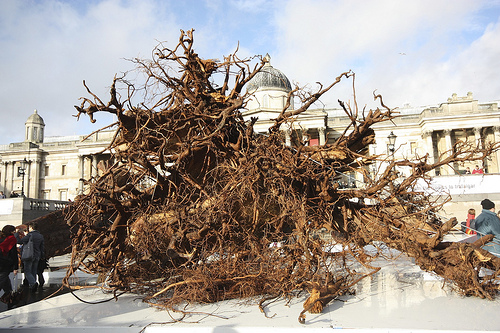 For the last two weeks of December I’ll be reprinting some of our favorite blog posts instead of putting up new ones. These will be on those evergreen topics that we can always revisit and apply to current projects. As this year winds down, hopefully some of these will be helpful as you plan for the one to come. Today’s post is from Jim Urban, FASLA and Dr. Alison Berry, Professor at UC-Davis. -LM

As an urban trees and soils consultant, I am always looking for studies that examine how trees survive and adapt to the built environment. One of the biggest questions and confusions I encounter is the issue of whether organic matter (something that I discussed in a previous post) needs to be added to urban soils on an ongoing basis.

Most designers feel that organic matter needs to be added periodically in an urban situation because it gets “used up” and, without leaves and other carbon-based elements decaying on the soil surface, fails to replenish. However, since we see urban trees completely surrounded by paving growing successfully, it seems reasonable to suggest that the soil is benefiting from another source of organic matter. I have long wondered whether the contribution of root turnover and exudates could be the explanation.

I took this question to a colleague of mine, Alison Berry, a Professor in the Plant Sciences department at the University of California-Davis, to find out more. Here’s what Alison had to say.

I agree with the gist of your comments, Jim.  Let me add a little more information.

First off, it sounds as though there are some misconceptions out there about the formation and role of soil organic matter [OM].

Trees do not consume soil organic matter; they “consume” water and mineral nutrients (N, P, K, etc.) from the soil. Plants are net providers of soil OM through the process of photosynthesis, notconsumers, followed by plant biomass turnover. The benefits of organic matter in soil are mainly on its structure, but soil OM can also be a minor reservoir of nutrients and can contribute to water-holding capacity.  Soil OM also provides a “slow-release” form of carbon that the rhizosphere microorganisms can use, as you point out, but the tree does not use this directly itself.

Most soils contain some percentage of organic matter; the amount will vary based on the soil. Soil organic matter can last for years and years, even hundreds of years or more. What a tree may be benefiting from now might have been deposited hundreds of years ago, long before the tree, the pavement, or the city existed. Soil OM of 5% total weight is considered an excellent amount for a very high quality soil; urban soils may contain less than 1% organic matter, but it still serves a function.

Now, to the question of whether and how organic matter is replenished by tree root turnover and root exudates in an urban setting.

The relative carbon contribution of fine roots to the soil really depends on the quantity of fine roots that form and their turnover (growth followed by death) every year. This can vary by soil and by tree species. Also, storage of carbon (C) in soil organic matter depends greatly on the composition of the roots (and the leaves, but I’ll touch on that later). Whether we can consider the carbon contributed by root turnover to be stored as OM all depends on the “residence time” in the soil. Some forms of carbon are not easily decomposed (“resistant” or “recalcitrant” carbon), so they remain in the soil and contribute to soil organic matter.  These compounds may be composed of phenolics, lignin, even cellulose or similar polymers; or they are bound very tightly to mineral soil particles.

Tree root exudates, in contrast, are sugars, organic acids and amino acids.  These compounds would probably be used as energy for soil respiration, becoming converted to CO2, and therefore would not be incorporated into soil OM. So we can probably leave those out of the equation.

A really interesting paper by DL Godbold et al (2006) examined this issue in detail. They measured leaf biomass, fine root, and mycorrhizal fungal biomass of poplars over a 2-year period. They found that the fungal biomass is the major contributor to soil OM! The fungal biomass contains recalcitrant C compounds such as chitin, glomalin, and more. In addition, the turnover rate of fungal hyphae is estimated to be quite rapid. It seems that leaves just turn over once per year and fine roots turn over up to 3 times per year, but fungal hyphae might turn over every nine days. I personally think that estimate might be a bit high, but no one is sure yet.

An older paper by Jim Pregitzer’s group also addressed this topic. They excavated whole maple trees at two sites in Michigan and measured their woody biomass, leaves, fine root “standing crop” and turnover. I use this study in my classes, because it shows that the fine root annual standing crop is far larger than the annual leaf biomass, even if we restrict  the definition of “fine root” to be roots LESS THAN 0.2 mm in diameter! If you include some of other small-root categories (up to 2 mm diameter), the total fine-root biomass is much larger. You could expect to have up to 100% of these very fine roots form and die each year — and some fraction of that turnover will become soil OM (see the Godbold et al paper for some calculations on that).

Of course, not all of the fine-root biomass will be incorporated into soil OM.  A significant fraction of it stays in the soil, though, either as plant or fungal carbon, and becomes progressively more and more stable as it is processed by the soil food web. All in all, the OM provided by the fine root biomass is likely to be one contributor to the success of trees growing in heavily urbanized environments.

Alison Berry, PhD is a professor in the Department of Plant Sciences at UC-Davis.