The Uncertain Fate of a Better Market Street 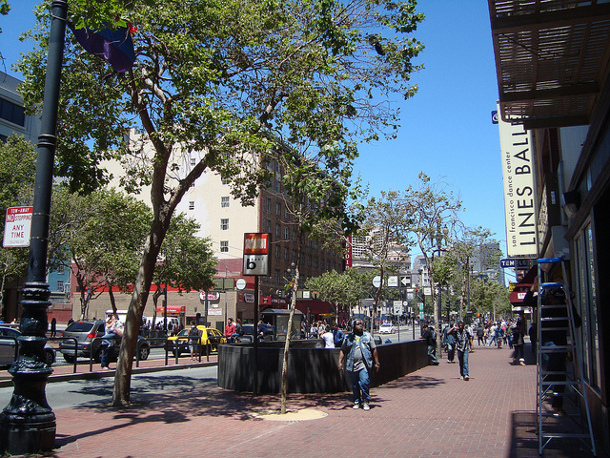 A couple of years ago, I wrote hopefully about the City of San Francisco’s plans to revamp our main thoroughfare, Market Street. The project, which began in 2009 and planned to improve transit, pedestrian spaces, and business opportunities, represented a tremendous opportunity for Market Street to meet the grandness of its proportions. I hoped for an ambitious design for the street’s trees, which would help meet Better Market Street’s stated goals of anchoring public spaces, creating sustainable and enjoyable places, and transforming the street in to a place to stop and spend time. Unfortunately, construction delays, lack of interagency coordination, and other obstacles have delayed their timeline. Now, the fate of the whole project seems uncertain.

According to the San Francisco Examiner, construction was initially set to begin in 2013. That was quickly amended to 2015, and now it has been changed to 2017 (and wouldn’t be completed until two years later). All this upheaval has been exacerbated by the departure of the plan’s manager, Kris Opbroek, who is moving on to a position at San Francisco International Airport. Five different city agencies are involved in the project, including the SF MTA (Muni), the Department of Public Works, and the Planning Department.

In the Examiner’s article, Supervisor Scott Wiener was quoted as saying, “This is a glaring example of the problem we have in San Francisco… We have very poor interagency coordination and sometimes a total lack of coordination.”

Then in early April, I got this email in my inbox:

Over the next few months, the team will study the existing conditions of Mission Street; transit, traffic and vehicular circulation patterns of both Market and Mission streets; and how the two streets connect and relate to each other.

All three options will be presented at public workshops this summer and studied in detail during environmental review, scheduled to begin this fall. The current schedule shows construction beginning in 2017.

Meanwhile, Supervisor Wiener is looking in to a parcel tax that would be dedicated to street trees and park trees, and would cover both maintenance expenses as well as increasing the overall number of trees in the city. The tax would be contingent upon the City assuming full responsibility for the street trees (which is not currently the case). His office is conducting polling to assess whether a parcel tax would have a chance of passing. If it’s deemed feasible, they’ll be working with various city departments, including the Department of Public Works and community planting organization Friends of the Urban Forest, on an appropriate proposal.

I’m curious – would you pay for a parcel tax dedicated to tree planting and maintenance? How much do you think would be reasonable?