The Future of Urban Forestry 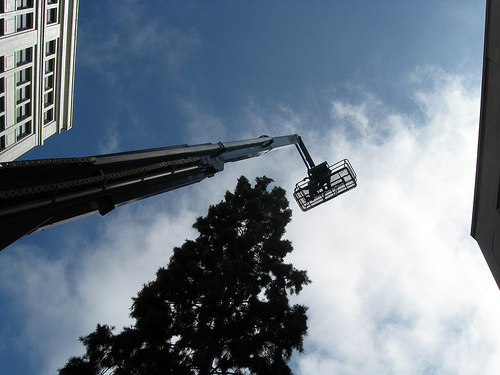 There is an interesting online discussion happening in the Urban Forestry group on LinkedIn right now about the future of urban forestry. I think about this question a lot, and the discussion was a good excuse to put some of my thoughts down on paper.

I believe that Urban Forestry needs to be seen more as “the forest in an urban area,” rather than, “urban conditions that the forest adapts to.” For me that’s the future, so I won’t have to watch more generations of trees die before their time.

Forests have been growing on land for over 400 million years. The co-evolution that led to this massively successful strategy is oxygen rich (uncompacted), biologically active soils that support crude tree root absorption systems. To this day most tree roots, in and of themselves, cannot support a large canopy. Most of the oxygen, water, and nutrient absorption that the successful tree harvests is via other organisms — fungi, bacteria, etc. Tree roots have not had to become super efficient at harvesting water, oxygen, and nutrients, because soil organisms have been doing this so well for so long. Evolution is driven by a big change to existing conditions. Usually most everything dies, and the survivors, all of them, end up with the one new strategy that keeps them alive. This takes a while in big organisms (like trees), but not so long in smaller ones like viruses, bacteria, fungi. Some people are proponents of cultivating these qualities in trees, but it will take humans a while to clone these traits.

This co-evolution/synergy is a successful trade for services between organisms in oxygen rich biologically active soils and tree roots. There are of course anaerobic organisms that contribute to the tree’s success, but the overwhelming numbers are with the aerobic (oxygen) organisms.

For me the future of urban forestry is the old way of forestry: adequate volumes of uncompacted, oxygen rich, biologically active forest soils – whether Entisols, Oxisols, etc. Creating an environment like this is not free, but it does work, and forests have become one of the most  exceptionally effecient systems on earth. We can bring the forests into our cities, on their terms, and enjoy that success. I don’t want to wait for a technological fix, and besides, I don’t have too. The solution is already here.

I am not saying that we can’t clone or technically figure another way out of the problem of how to create a robust urban forest. I am asking, why would we? The current forest system works spectacularly well. Many of us are trying to get trees to adapt to us (urban conditions), rather than adapt ourselves to the trees needs. If we keep high numbers of compaction-causing agents in cities, we will need to shelter/protect these tree roots & soils together to get the results.

That’s why, for now, I think that the best hope for trees in urban areas is to give them the soils they need under suspended pavement. If we enacted a simple policy change such 1,000 cubic feet of uncompacted, oxygen rich soil (loam) per street or plaza tree, our urban forests would be excellent in 20 years, and spectacular in 50 years. I hope to still be alive to see them in 20 years.

The other possibility is that we want something for nothing — what I call the “magical tree thinking syndrome.” My 9 year old twins do this kind of magical thinking on lots of subjects. It keeps them happy, but nothing actually changes. Maybe that’s what policymakers want: a free ride. Certainly many Mayors and local governments seem to hope this scenario will work, “I’ll plant a million trees (the same way as before, in small amounts of horrible soil), and I’ll get all the ecological services (by magic), and have the world’s/country’s/state’s greenest city. And I’ll get it for $50 a tree.”

We can wake up and change the way we think of and plan for the urban forest — its role in our quality of life, the ecology of the built environment, and in the safety and robustness of our cities and towns — or we can continue to pretend that by not doing anything differently, things will magically change.