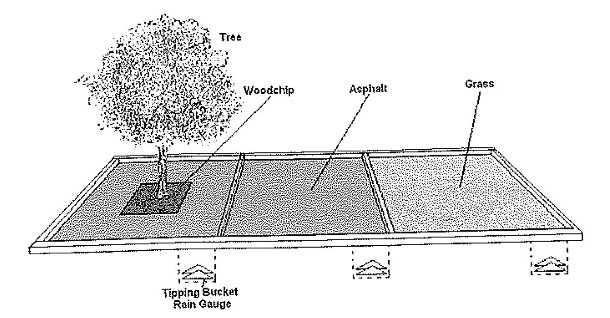 The study created 5 test sites, each containing three 9 square meter plots: one of grass alone, one of asphalt alone, and one of a tree planted in a small (1 meter x 1 meter) opening and surrounded by paved asphalt (see image above). Each test site was identical in construction, and the three plots were all adjacent to one another and surrounded by edging stones to keep the runoff contained to each treatment. The planting method for the tree plot was based on what is typically seen in Manchester suburbs, and existing site soils were used (the study notes that they ranged from containing “high proportion of building rubble… to loams with a high organic matter content”). The plots were constructed with a 1:40 gradient to mimic a gentle slope; in this case, toward surface drains located in a far corner that collected any runoff in tipping bucket flow gauges. 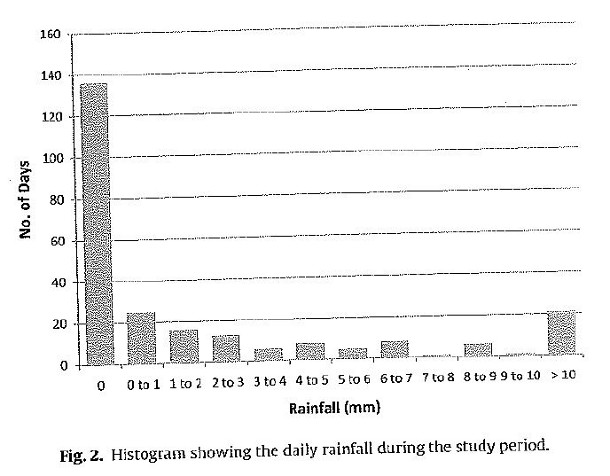 The grass treatment eliminated runoff almost entirely. The mean runoff was less that 1 percent of the total rainfall in both the winter and summer months.

The mean runoff of the asphalt-and-tree treatment was 26 percent of the total rainfall in winter, and 20 percent of the total rainfall in summer. The authors of the study estimate that this treatment reduced the mean runoff by about 62 percent – much more than would be achieved by interception alone based on the finding of previous studies (15 percent at the low end of and 60 percent at the high end – Xiao et all [2000], David et al [2006], Guevara-Escobar et al [2007], Asadian and Weiler [2009]).

The tree planted in the tree-and-asphalt treatment had a relatively small canopy that covered an average of 35 percent of the total plot area, therefore authors concluded, “A large proportion of the runoff reduction must have due to infiltration into the tree pit.” They go on:

The findings of this research therefore suggest that urban tree units can greatly reduce surface water runoff. The reduction of surface water runoff is not solely due to interception by the canopy but also to the presence of the tree pit in to which much of the rainfall drains. Though the grass almost totally eliminated runoff from its area due to infiltration, our trees actually reduced runoff more in relation to their canopy crown area: relative to its area, a tree on average reduced runoff by 170% in summer and 145% in winter!

The study does not specify the soil volume of the tree pits, but we can guess that it might be around 1 cubic meter (35 cubic feet) – very little soil. The test plot was also quite small, of course. While we can’t know with certainty what the results of the study would have been if it were done in a larger area, the findings are consistent with what we already know about the ability of trees and stormwater to manage a significant volume of stormwater.

Imagine if the entire area under the asphalt were supported by a suspended pavement filled with a quality bioretention or loam soil. Imagine if that stretched across a whole downtown or a large parking lot or a central community plaza. Think what it could do for reducing flooding and protecting sewer systems and adjacent water bodies.