In order to document the growth and performance of trees in Silva Cells, and to validate our own approach to designing for both trees alone and trees-and-stormwater in combination, in 2015 we undertook a research and monitoring study of 10 Silva Cell projects across North America.

This was a big project, as you might imagine. At the time of data collection it had been eight years since the first commercial Silva Cell installation – long enough to have built a great variety of projects – allowing us to assess tree performance and to compile lessons and best practices to guide future efforts. In this time, approximately 1,000 installations have been constructed. We estimate that those projects include more than 18,000 trees.

Today, we want to share some of the findings of this research in the first of a three-part series.

We sought to undertake a comparative study that records and evaluates the performance of a large number of trees planted in Silva Cells in built landscapes across many climates and urban situations. The group of 10 study projects were selected based on the following criteria:

These projects contained 18 different tree species growing in Silva Cells in urban streetscapes and public spaces in a variety of regions and climates across the United States and Canada. The intent was to make the study large enough to account for variations in urban environments, maintenance, and surrounding soil conditions. The projects were all located in the USA and Canada, encompassing varied climates including Mediterranean, arid/desert, cool temperate, and warm temperate.

The total number of trees in the study was 408. 16 of these trees were excluded from the analysis because they were dead or nearly dead. Thus, all statistics in this paper — with the exception of our analysis of overall tree condition — are based on a sample size of 392 trees. The number of trees on each project ranged from as few as 7 to as many as 180.

Projects had different methods of watering, including bubblers, pervious pavers, drip irrigation, irrigation at tree opening, and irrigation under paving. Two projects (South East False Creek and Ft. Saskatchewan) contained over half of all the trees, but these projects had many sub areas that allowed examination of different species and planting conditions.

The following is a list of the surveyed projects. 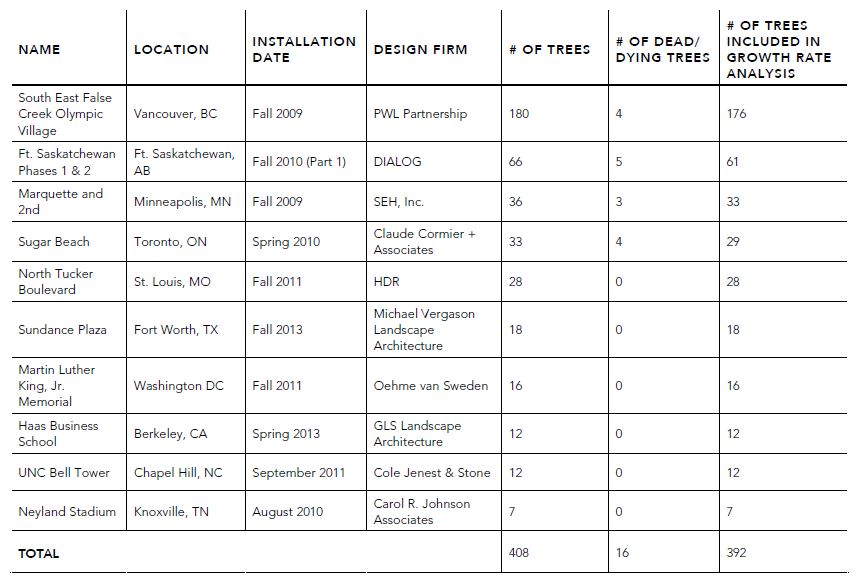 Each tree was visually inspected and rated. A guide was supplied that contained a numbered rating system (1, 2, 3, 4) to designate the tree’s condition: 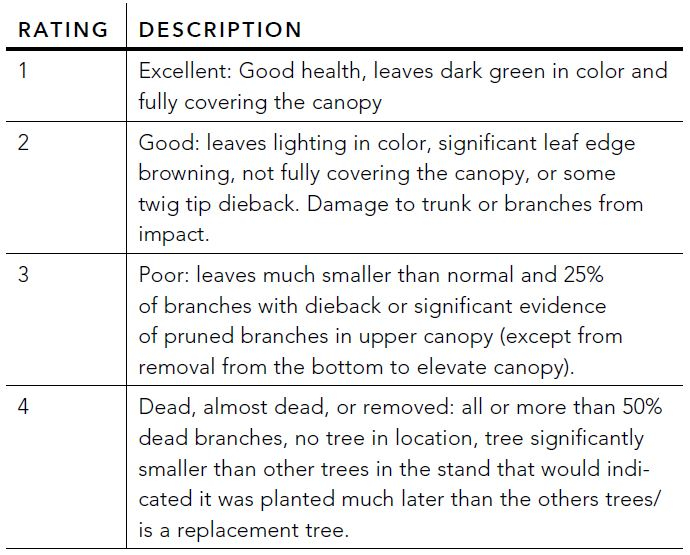 Assessing tree health in this manner is somewhat subjective and tree health data is primarily for us to better understand the tree condition at the time of the initial observation, and to set a base condition for comparison when the trees are revisited for a follow up study. Health assessments were recorded on a standard excel sheet pre-populated with the tree ID numbers for the collaborator.

Trees were visually inspected, measured (diameter at breast height, or DBH), and photographed. Each tree was assigned a numerical health rating. Data was recorded by regional collaborators who visited the site to collect the data. 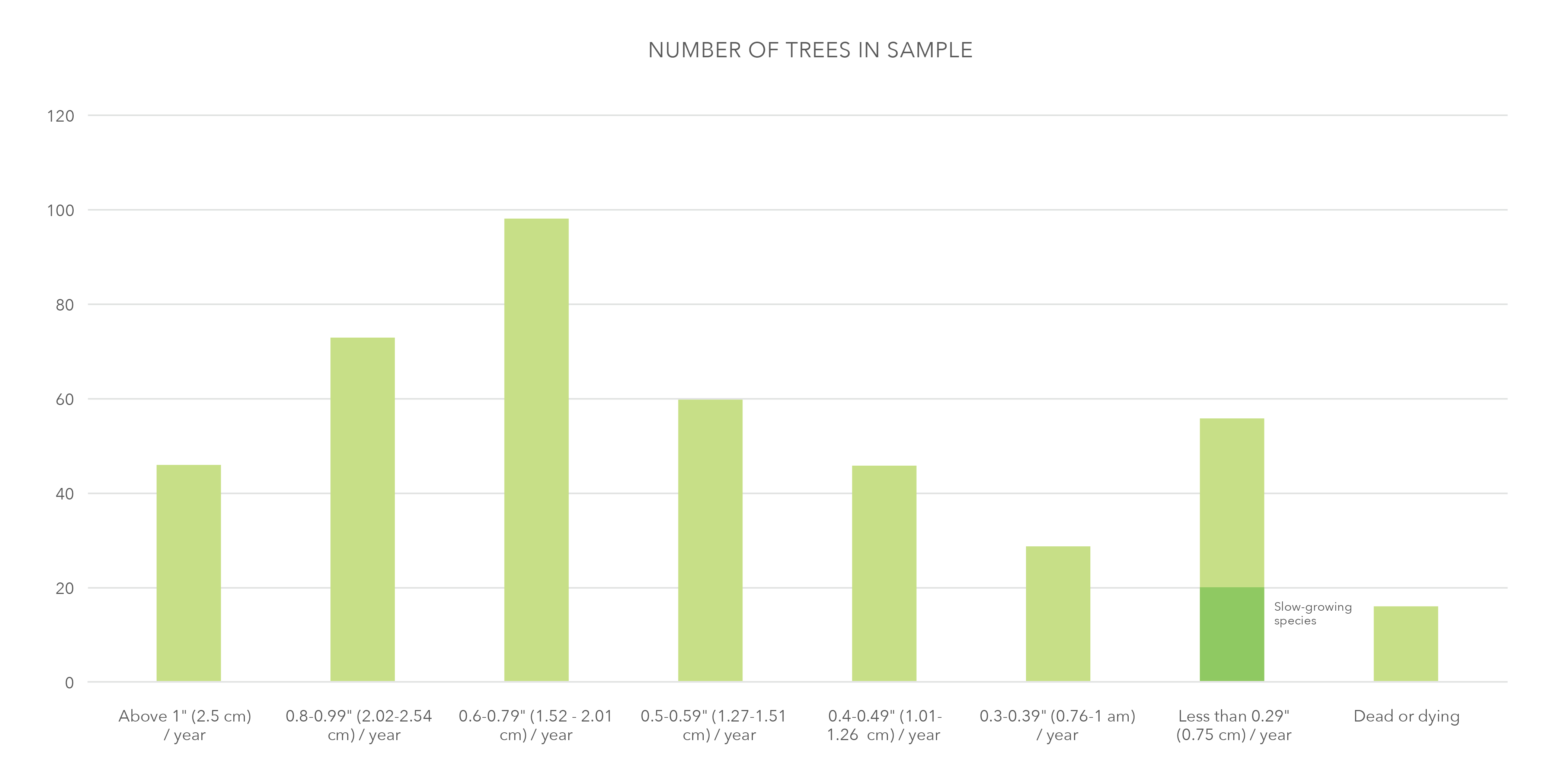 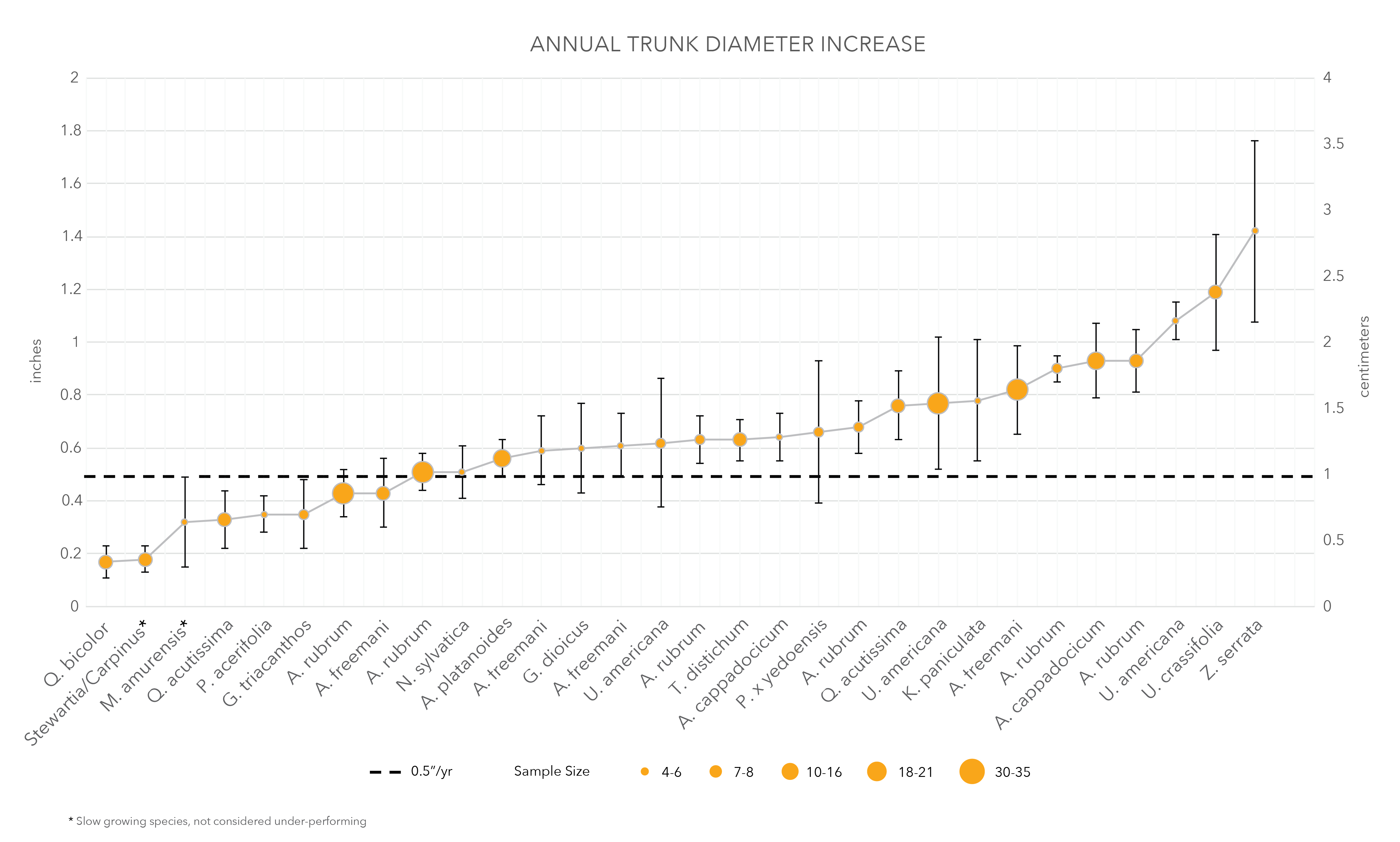 This graph arrangement of ranking from slowest to fastest was used to examine other factors to see what may be influencing these results.

The standard deviation for the species at each project site are larger than would be expected in a controlled field study. This represents the background clutter from collecting data in real world, publicly constructed, and accessible sites. We accept that this condition exists, making the data less reliable than a controlled study site, but the intent of the study was to test the thesis in real world situations.

The key finding from the raw growth results analysis? Trees planted in Silva Cells on average have higher yearly growth rates (mean=.65 inches/year) than the general growth standard, which we set at 0.5 inches (1.27 cm) based on a broad survey of published tree growth rate research (P<0.001) (t-test, Stata version 13.1).

You can download the full study here. Stay tuned for parts two and three of this series, which will go into more detail about the study findings, and a discussion of their significance.