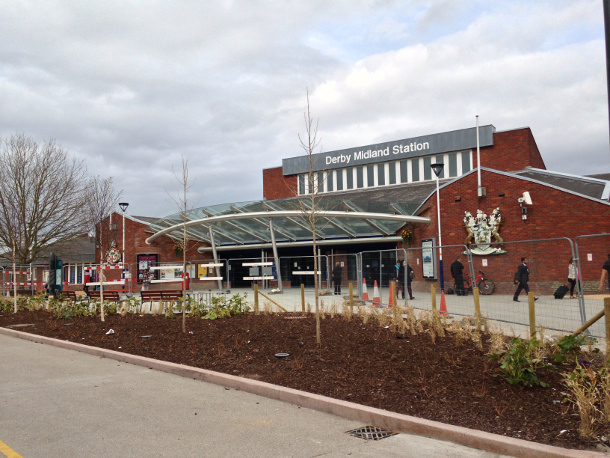 The Derby Midland Station after the renovation

The city of Derby has been in the midst of an ambitious urban regeneration project since 2003, a key aspect of which has been the development of a public realm strategy that increases pedestrian freedom and enhances major civic spaces such as the Derby Railway Station. Derby City Council laid out a plan to modernize the entrance and improve facilities at the station, a major hub for the Midland Main Line which is slated to become “one of the most modern electric railways in Europe” according to Network Rail, the company that runs the UK rail network. In addition to the innovative electrification of trains going through the station, the site will also boast innovative technology in the landscape that will foster tree growth and provide on-site stormwater management.

Due to its central location, Derby has always been a railway town and the Derby Railway Station was one of the largest in the country at the time of its opening in 1844. With the passage of time and the installation of major highway routes adjacent to the railway station, however, the design of the station’s grounds were in need of numerous sustainable improvements ranging from the construction of a new bike shelter to an increase in the site’s tree cover. Andy Smart, project manager for the station renovation, has been quoted as saying that the revamping “will put people at the heart of the station rather than the current system which revolves around cars.” The site also had a limited drainage system that served the area poorly and was easily overwhelmed by storms, causing water to escape and flow over the footway and into the highway drainage systems, presenting serious issues for pedestrian and vehicular traffic. 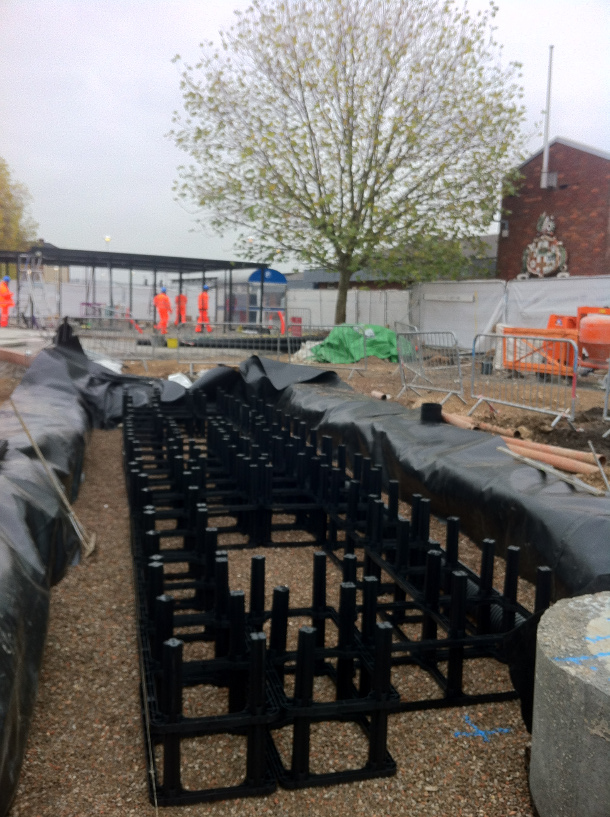 The design team elected to approach these problems concurrently by creating a new bus interchange at the main frontage of the station that included a traffic island on which 5 Silver Birch trees were planted. Below the ground, the traffic island was filled with a two-layer deep Silva Cell system that serves as a storage zone for runoff from the station’s roof and surrounding area. This new drainage system combines existing flows and runoff to provide attenuation for all proposed storm events while also supplying a regular, natural irrigation supply to the new planting areas on the traffic island.

The site’s existing gullies, pipework and silt-trap/interceptor were decommissioned and a new carrier drain and channel was installed. The new carrier drain is 225mm in diameter, approximately 100m in length, and collects storm runoff from an impermeable area of approximately 0.22 Ha. At its lower end, the carrier drain enters a chamber with a flow control and 500mm silt trap sump just inside the planting area. The ongoing flow is restricted by means of a 100mm pipe that results in a buildup of water within the chamber. A 225mm diameter high-level outlet allows dissipation of the flows into a slotted pipe, and from here into a dedicated filter zone. From here the flows pass into the two-level soil storage area provided by the Silva Cells. A backfill of angular stone lines the perimeter of the Cells, allowing water to pass through the soil and stone to reach a 150mm perforated pipe that provides a controlled outlet from the storage into the existing system where it joins roof runoff from the existing station building. 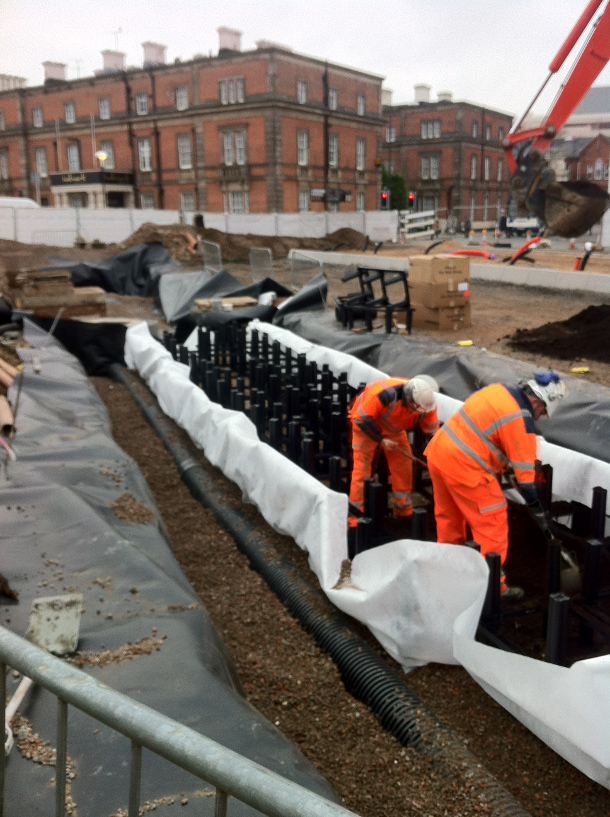 This application of Silva Cell technology is an atypical one in that the traffic island that houses the Cells has an unpaved surface and will not be trafficked by vehicles or pedestrians. 300 mm of soil covers the two layer system of Cells and an impermeable membrane lines the perimeter of the excavation site. In light of this somewhat shallow depth of the soil above the decks, an additional barrier of Terram geotextile needed to be added in order to prevent settlement and act as a separator between the soil and clean angular stone backfill. 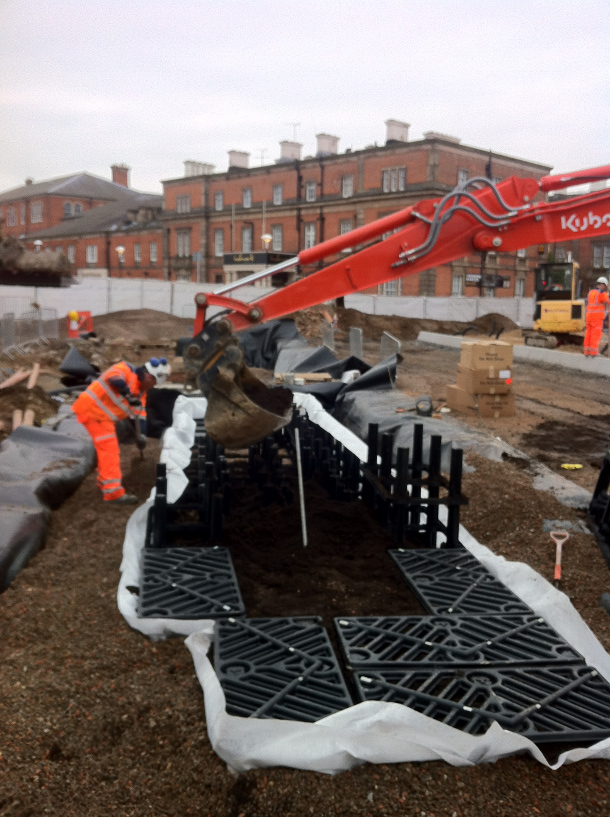 The new face of Derby Railway Station, with its modernized entrance and improved facilities, now also boasts an innovative subterranean system of green utilities that permits on-site stormwater management connected to a refined drainage system. For the city of Derby, visitors and residents alike can now enjoy a revamped entrance into a city that has welcomed the future of sustainable architecture and engineering solutions. 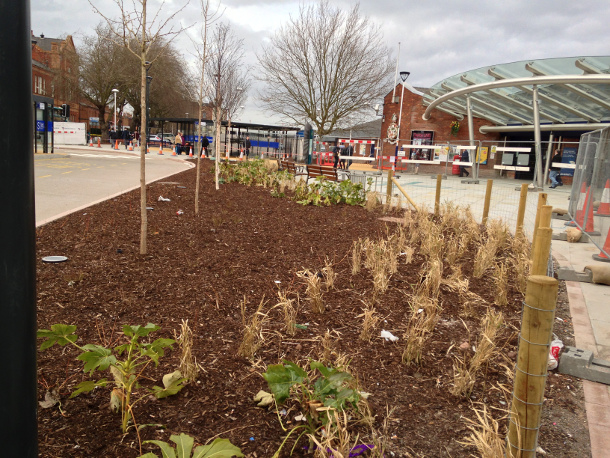 You can see even more photos of the Derby Station project on Facebook.