Planting trees and other large plant material in built-up urban areas in arid climates is always a challenge. More often than not, the constraints are numerous and the opportunities are few.  When a project is initially conceived, consideration must be given to all constraints, long before preliminary design plans begin. By developing a realistic plan of attack at this early conceptual stage, a truly successful project can transform those constraints into opportunities.

What are these constraints, and how should we respond to them?

Over time most of the area behind the curb that is the most opportune zone for tree planting has typically become filled with underground and overhead utilities, utility boxes, fire hydrants, parking meters, light and sign poles, and trash receptacles –  all potential impediments to tree growth and creation of mature overhead canopies. Carving out usable space for trees at the beginning of a project is essential for their long-term success and will often require relocation of utilities and site furnishings, and importing of improved soils.

In the prime tree planting zone (typically four to six feet behind the curb), soil conditions are typically dismal for tree planting. The soils are characteristically heavily compacted for either roadways, sidewalks, and building foundations. These growing conditions essentially result in abbreviated and stunted tree growth, and/or trees that are forced to grow in standing water from lack of water percolation around and below the root zone.

As has been demonstrated in numerous studies over the past decade, creating properly sized planting zones with high quality soils is perhaps the most important element to ensure successful tree growth, particularly in arid climates.

But what exactly does designing thoughtful irrigation in arid climates entail?

In general, watering should be deeper into the ground, which requires longer watering periods. Accordingly, watering should be less frequent.  Water deficits and water excesses adversely affect urban tree growth and survival. Poor drainage, compaction, or other detrimental surface conditions can be common in urban soils, particularly in arid climates. 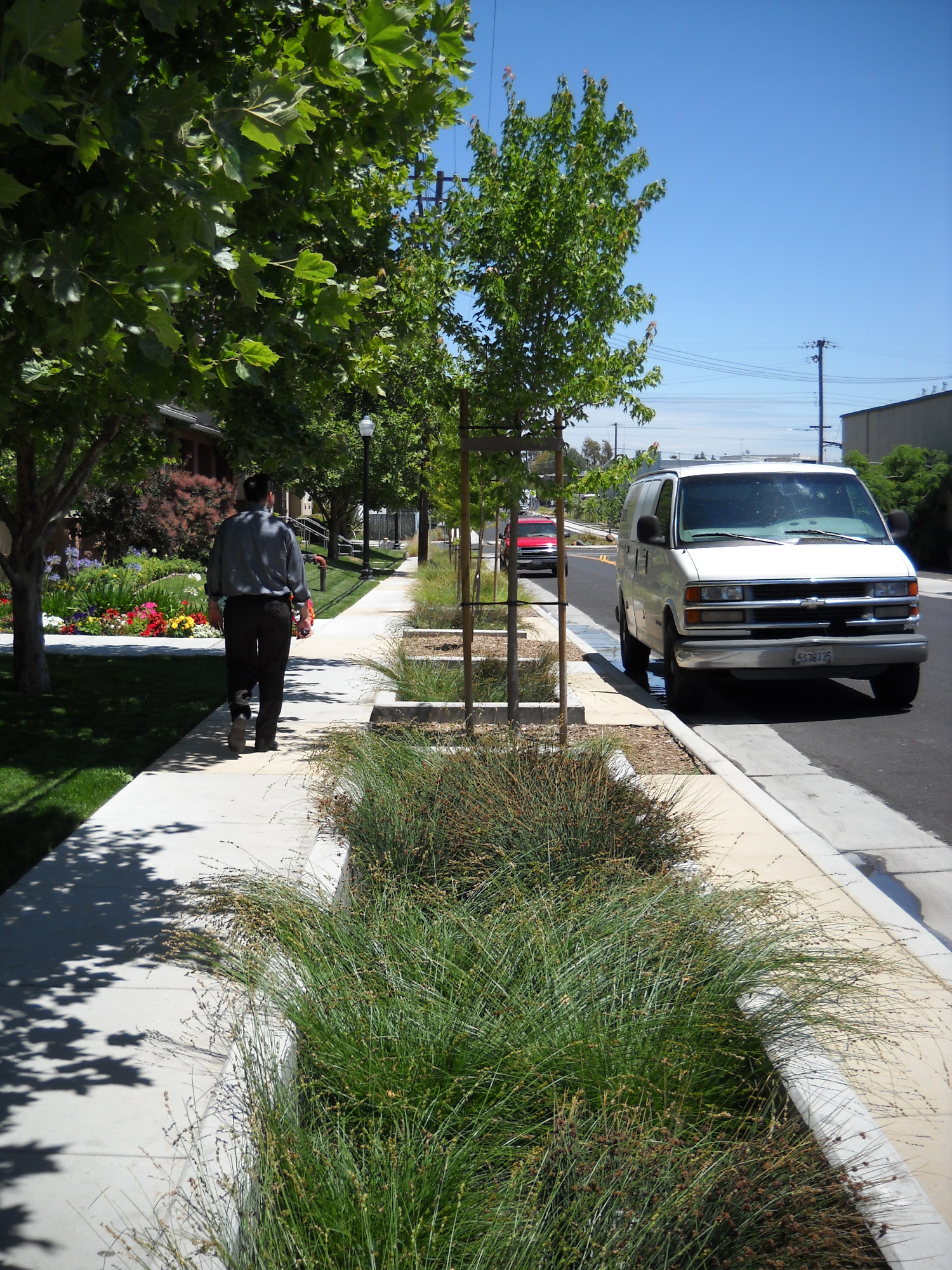 A properly designed irrigation system should apply the exact amount of water needed during each irrigation period. In arid climates, overwatering should be avoided to balance the amount of water and air occupying soil pores. Too much water means not enough air. When soil is over-saturated for prolonged periods of time, the microbial activity in the soil will deplete the oxygen available to the roots, leading to anaerobic conditions and potentially affecting root development and nutrient availability.

Typically, irrigation is meant for tree establishment and for supplemental watering during the dry season, which is most of the year in arid climates. During establishment, water should be applied to the full root depth, typically through rock filled pipes or other techniques to get water deeper into the root zone. Ideally, water for mature trees should be applied evenly throughout the outermost 75% of root zone. Avoid water runoff outside of rootzone.

During plant establishment, it is critical to keep the rootball well irrigated while also introducing water into the adjacent soils to encourage and provide conditions for root expansion and growth. Because nursery soils can vary greatly from native or prepared soils, it is important that irrigation water is in direct contact with the rootball.

Because of the limited space and the need to eliminate water waste and comply with ordinances such as the California’s Model Water Efficient Landscape Ordinance (MWELO), drip irrigation and bubblers tend to work best in providing the on-grade irrigation required at the root ball. As trees mature, it becomes more difficult to send water out horizontally to all the absorbing roots.

The ideal watering zone is typically down to about 12 inches (305 mm) below finish grade. It is not to say that deep watering tubes do not deliver water to these roots, but when 36″ (914 mm) deep tubes are placed, most of the water will be applied below many absorbing roots. If these systems are used, they should be done in conjunction with drip, bubblers or another system of efficient overhead irrigation and the depths should align with tree root depths.

Early planning for street trees in arid climates is critical, and should include creating budgets for street tree projects that adequately address costs for removal of unacceptable subsurface soils, expansion of tree root growing zones, and provide funds for proper irrigation systems and on-going maintenance. Without these essential items, the success of these trees will be seriously compromised.