Mosquito Creek Watershed in North Vancouver is a unique natural retreat nestled within a large urban footprint. The area is a popular retreat for hiking, mountain biking, and walking, and leads directly to the Trans Canada Trail, the longest hiking trail in the country. Due to its proximity to the City of North Vancouver, however, the water quality of the creek is compromised from non-point source pollution as stormwater is discharged from adjacent residential, commercial, and industrial developments. Despite pollution, the creek still supports fish and wildlife including deer, otters, salmon, and trout, and their survival is dependent on the efforts of volunteers who expend many hours to preserve and clean their habitat. Recognizing the need to protect it from further pollution, the City also requires developments in areas that drain directly to the creek to work toward treating stormwater runoff on site.

Remix Condiminum development was constructed in Spring of 2013, hosting 60 apartments atop ground floor retail space on West 14th Street between Bewicke Avenue and Mosquito Creek Lane in the City of North Vancouver. Sidewalk and road surface runoff coming off the condo area drains directly into Mosquito Creek via the downstream catch basin drain on the property. Without treatment, the stormwater runoff would carry harmful pollutants directly into the creek. The team at Vector Engineering was responsible for the stormwater design of the site, and in light of the stormwater treatment guideline, the City’s requirement that street trees receive a minimum of 10 m3 (353 ft3) of soil each, and the developer’s green goals, saw that green infrastructure could be a viable design solution to satisfy the needs of each. 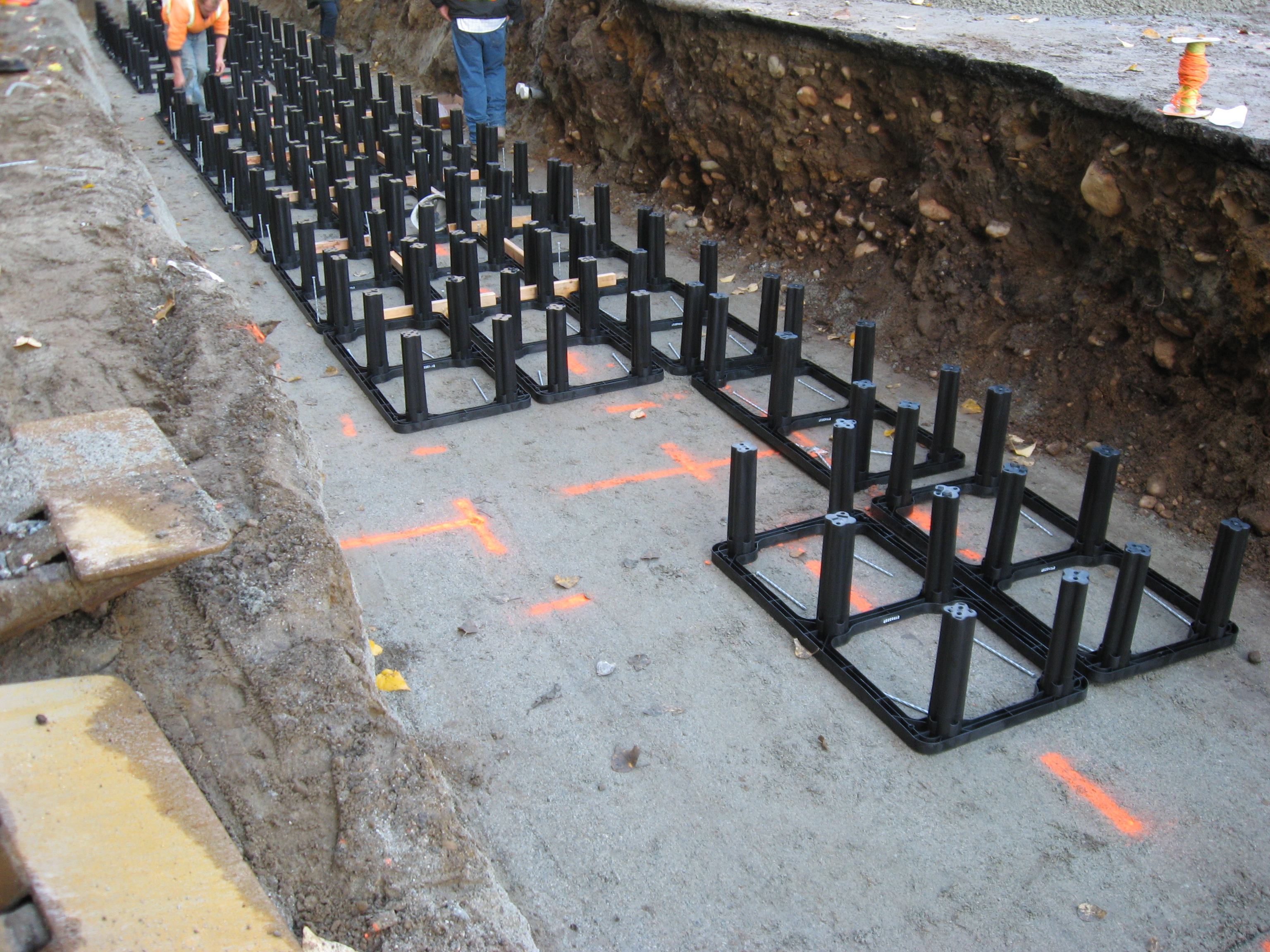 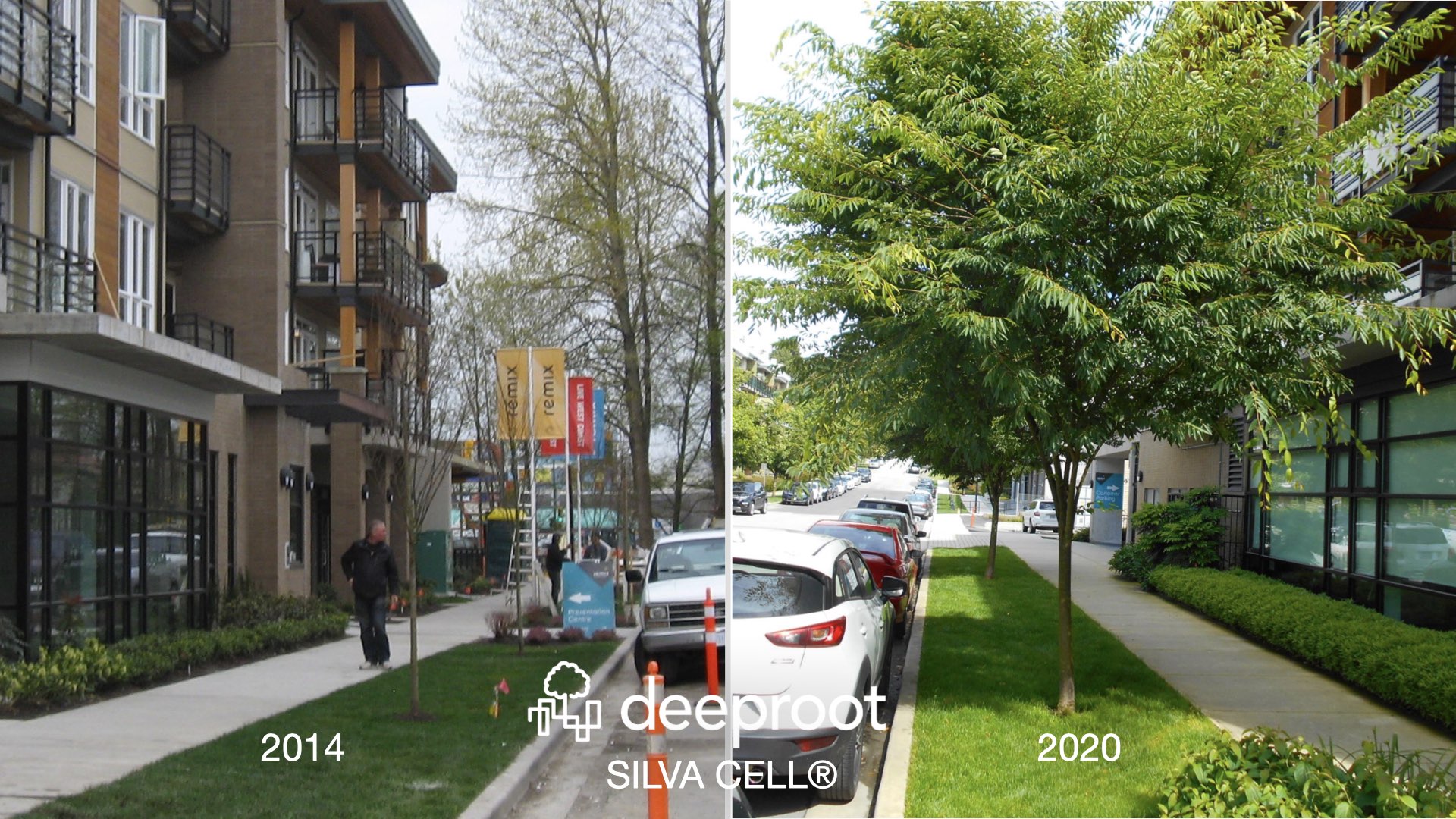 Vector wanted to design a tree and lawn area between the curb and the sidewalk to serve as a bioretention swale to slow down and treat stormwater runoff prior to entering Mosquito Creek. However, the street parking on one side of this area and the condominium and retail space on the other side meant that there would be frequent foot traffic across the lawn. The City, concerned that the lawn would settle and/or create a muddy trip hazard if it were used for bioretention, would not allow this design without some modification. 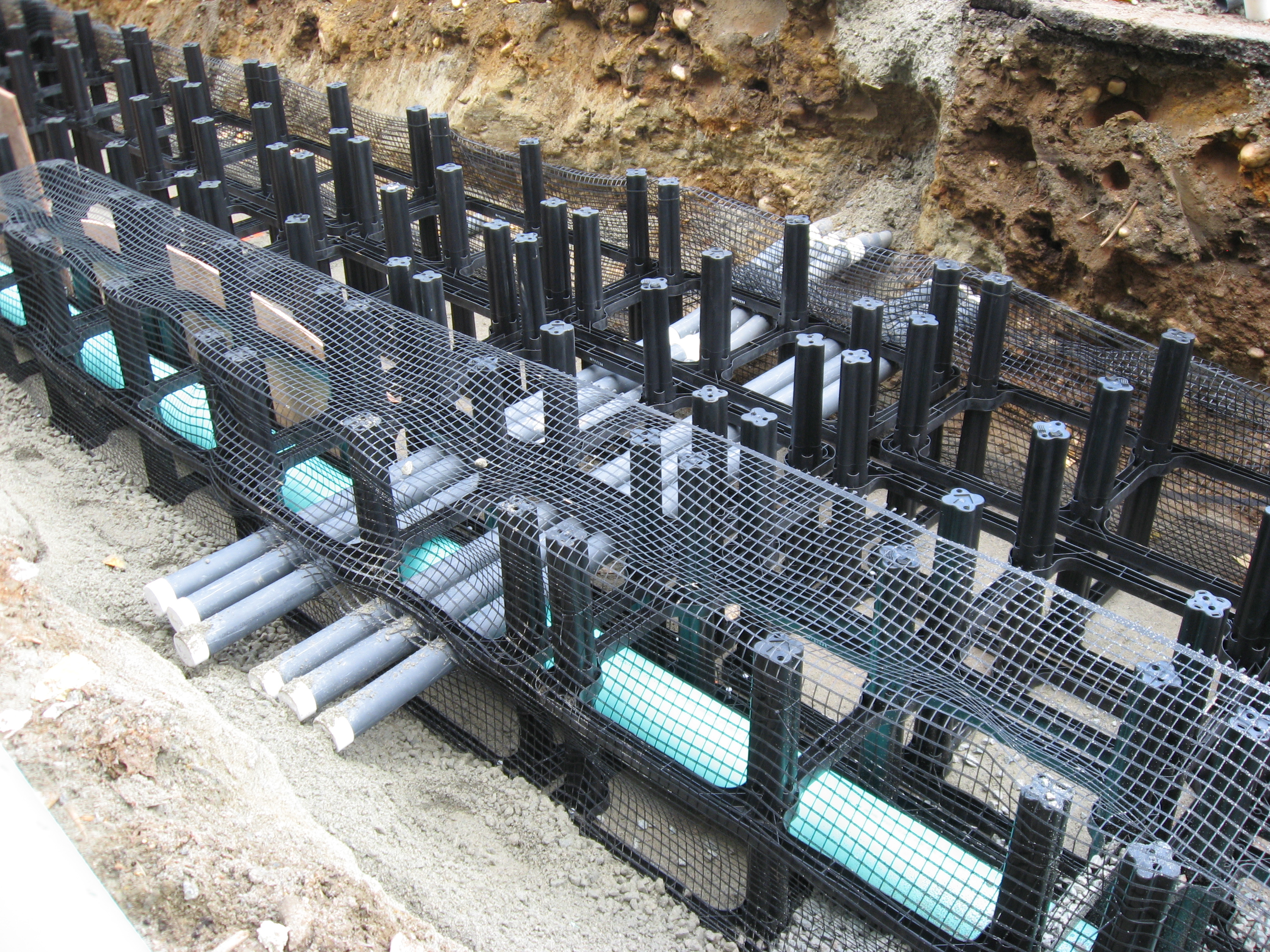 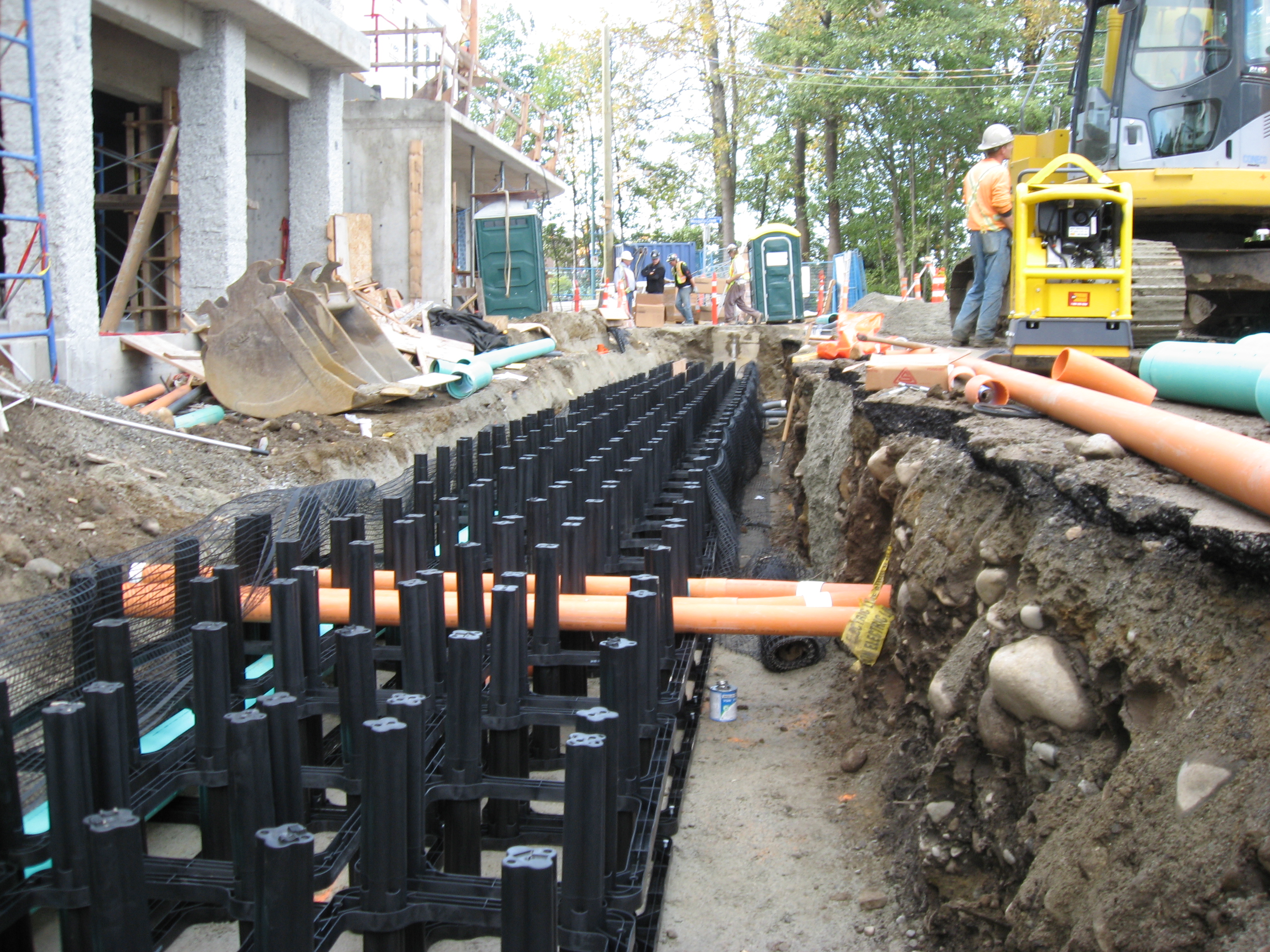 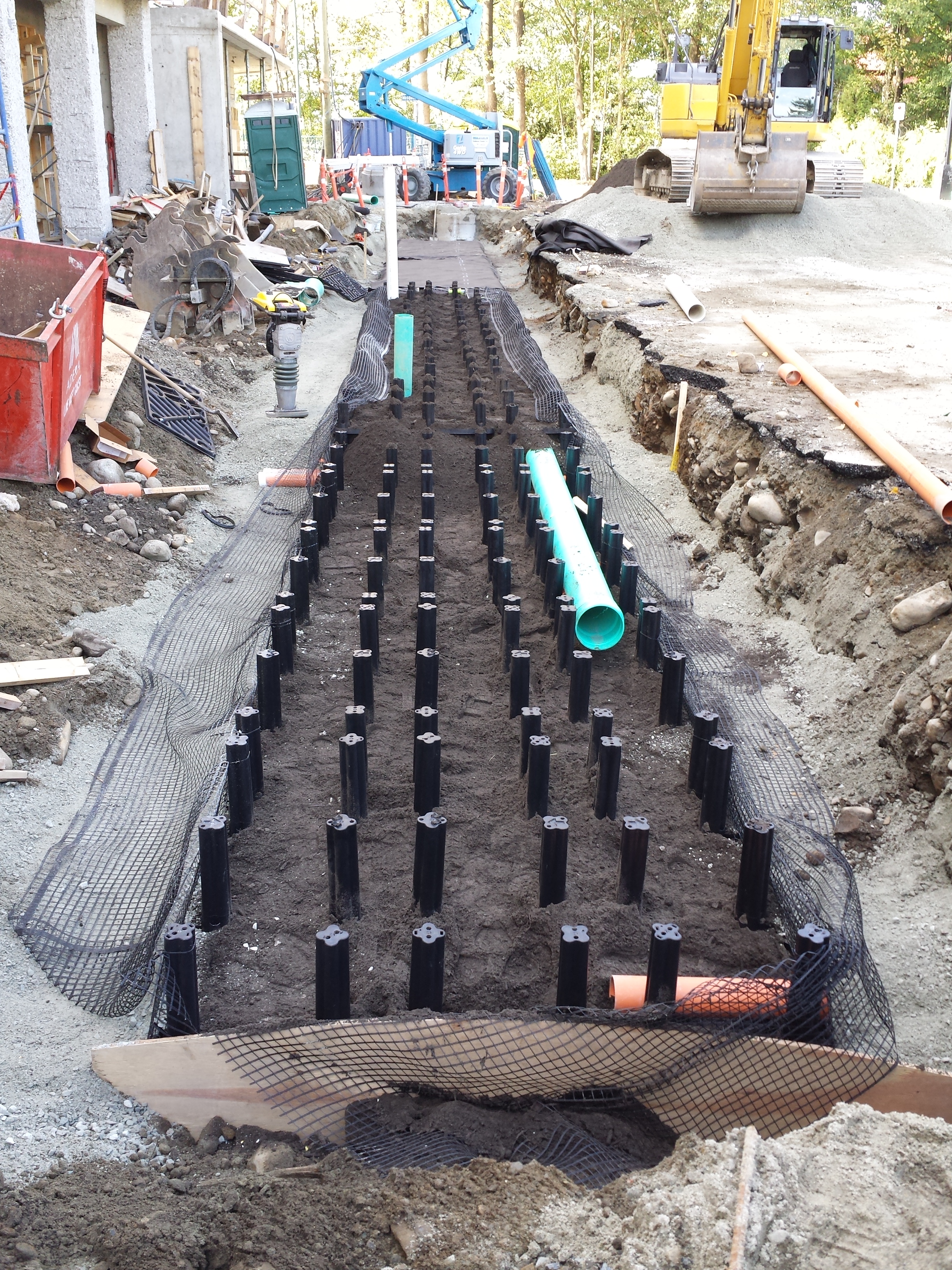 To eliminate the possibility of ponding and soil settling while still maintaining open bioretention, Vector had the idea to use Silva Cells under the tree lawn where four new trees would be planted. The Silva Cells provide void space for soil and stormwater treatment, as they are designed to do, but instead of being topped with aggregate and paving, the system is topped by additional soil that creates the tree lawn. The structure of the Silva Cells prevents soil settling while allowing an open, pedestrian-friendly design aboveground. By removing the chance of settlement, pedestrians have a standard, safe, flat tree lawn to cross – and the City and development have all the benefits of a bioretention swale.

Silva Cells were installed in a two layer system under the tree lawn and extend to the edges of the lawn. 300mm (one foot) of top soil and sod was added above the decks, where paving would normally go. The 300mm of top soil on top of the decks, as well as the extension of the Silva Cell footprint to the edges of the lawn, minimizes soil settlement. Water is collected from the street in a catch basin and then runs into the Silva Cells through a distribution pipe to ensure that it reaches the entire soil column, where it is treated and the flow rate is reduced. As the water moves through the soil column, it is cleaned and nitrogen, phosphorous, and other pollutants are removed.  A drain line at the bottom of the Cells takes the excess water to the downstream catch basin, which then drains into the Mosquito Creek. The site has a total catchment area of 350 m2 (3,767 ft2). 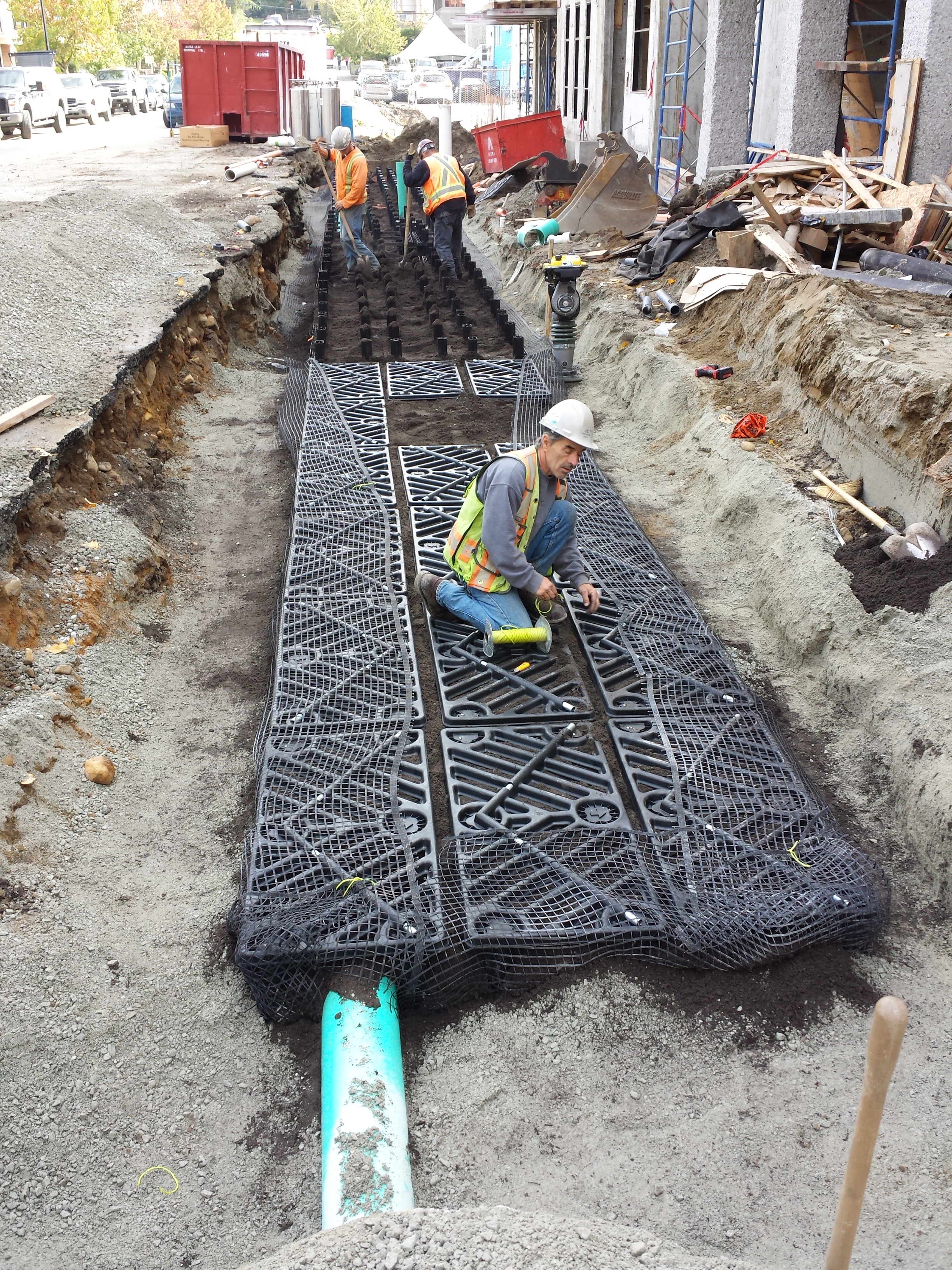 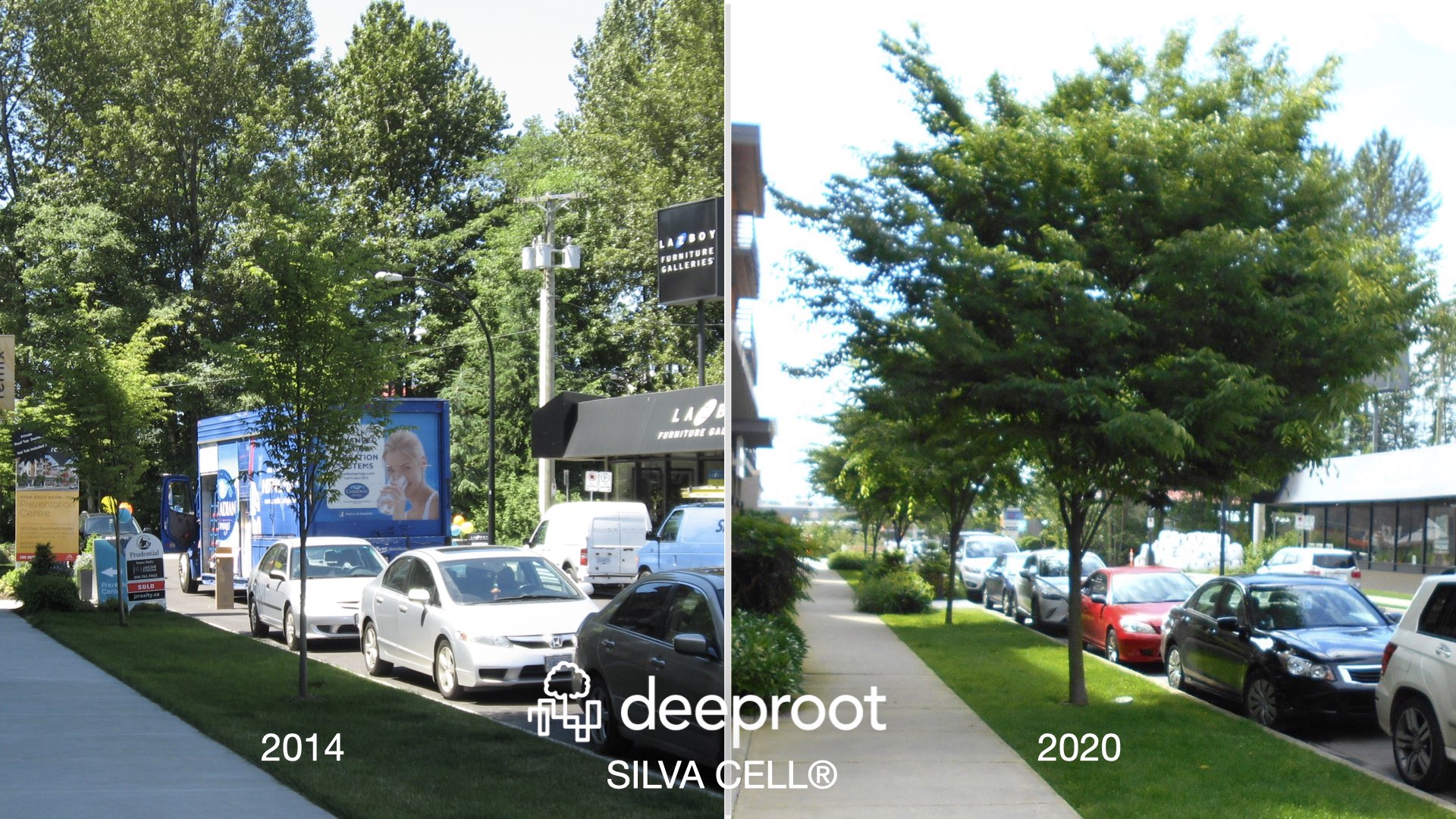 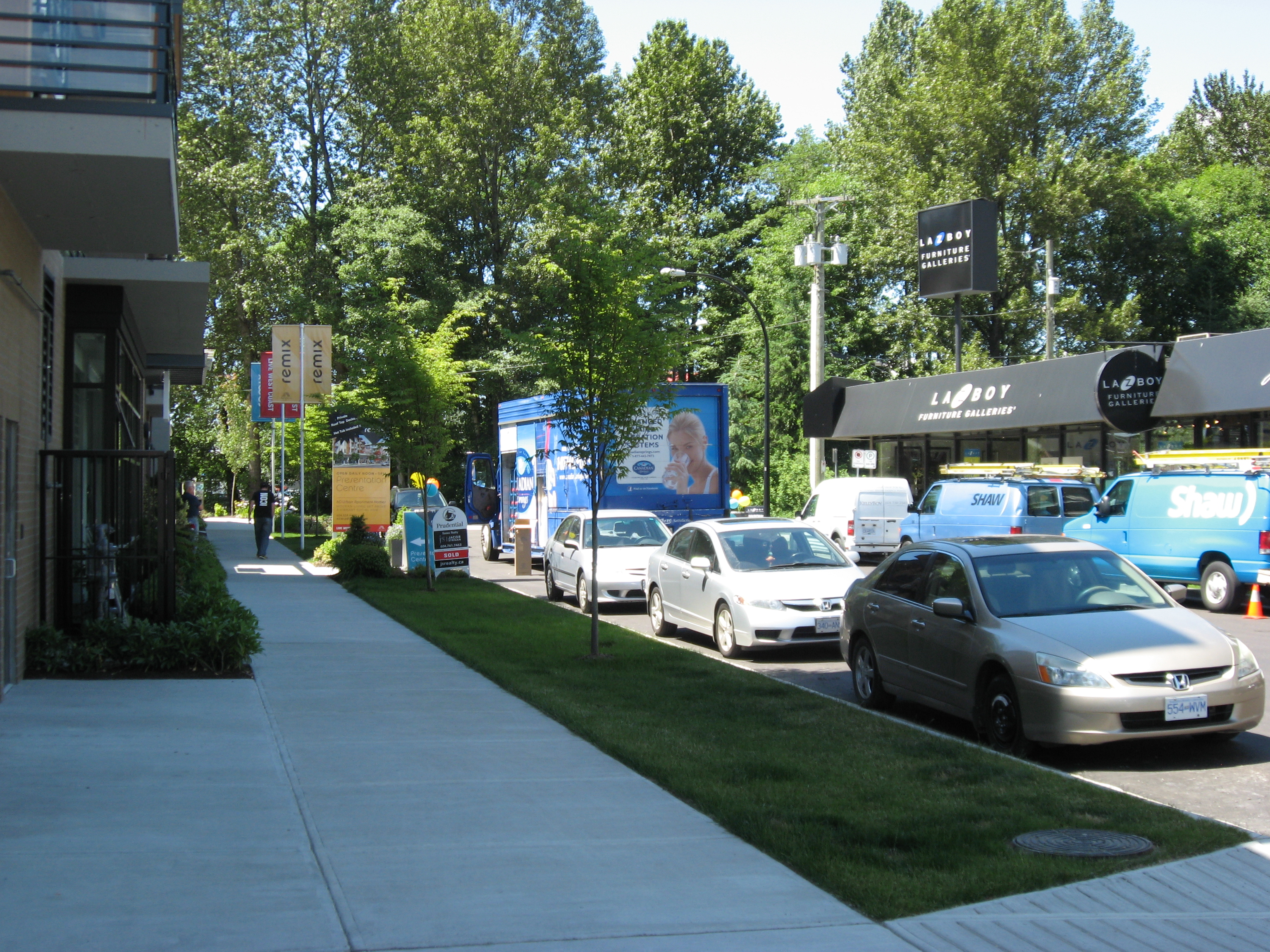 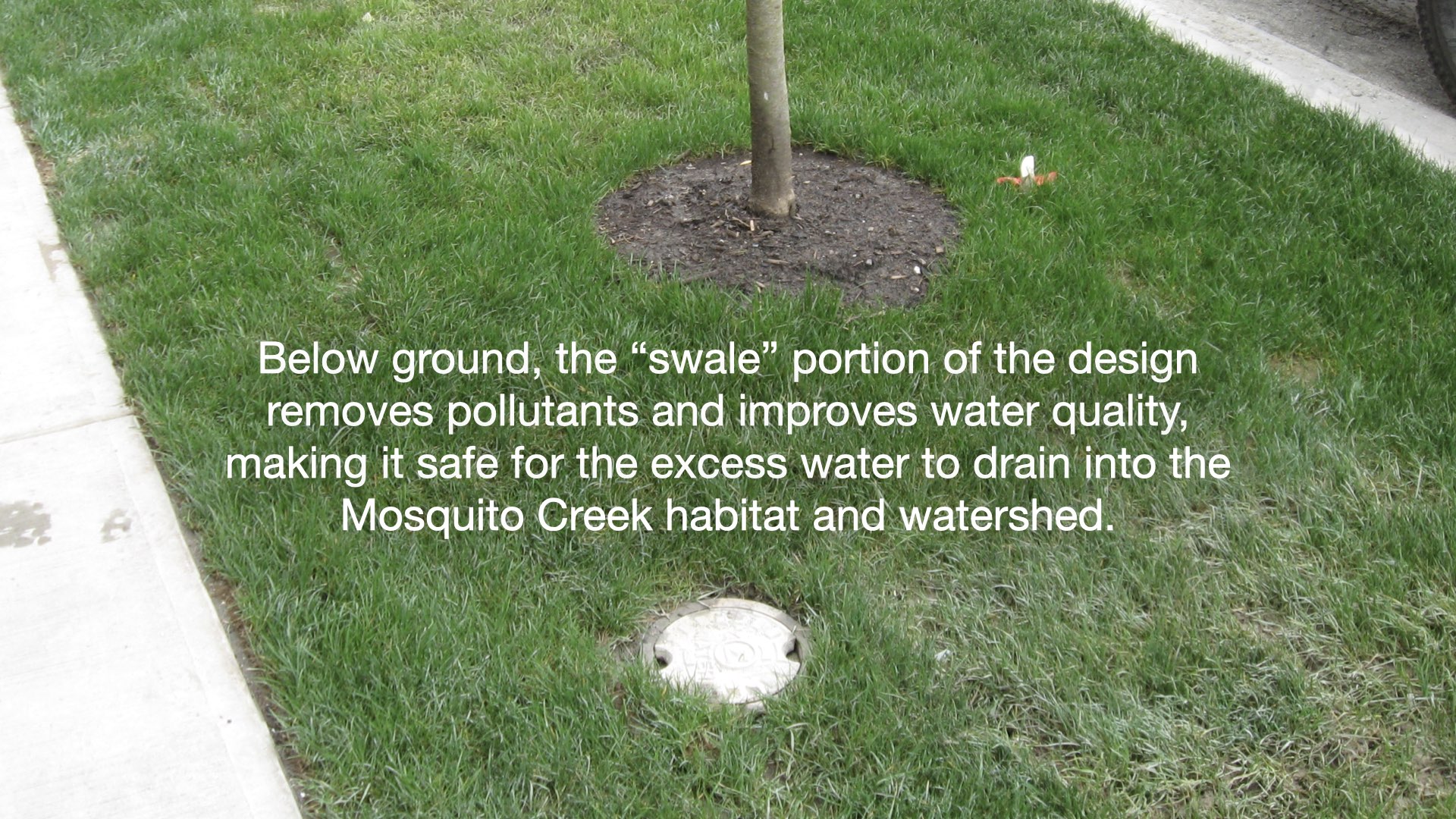 At the surface, the site looks like a normal tree lawn that is easily accessible to foot traffic. Below ground, the “swale” portion of the design removes pollutants and improves water quality, making it safe for the excess water to drain into the Mosquito Creek habitat and watershed. Residents of the Remix development and visitors to the retail area alike can stroll easily and safely across the tree lawn while, unbeknownst to them, bioretention is happening below. This innovative technique of on-site stormwater management adds to the high standard of energy conservation that Remix promises to their residents through other features such as energy efficient windows and appliances and other in-unit green design amenities. As one of five recent projects in North Vancouver that use the Silva Cell system to manage stormwater on-site, the Remix development demonstrates not only how private owners and cities can work together to meet shared development goals, but reveals  that there are new areas where stormwater can be treated without giving up pedestrian friendly grass areas. 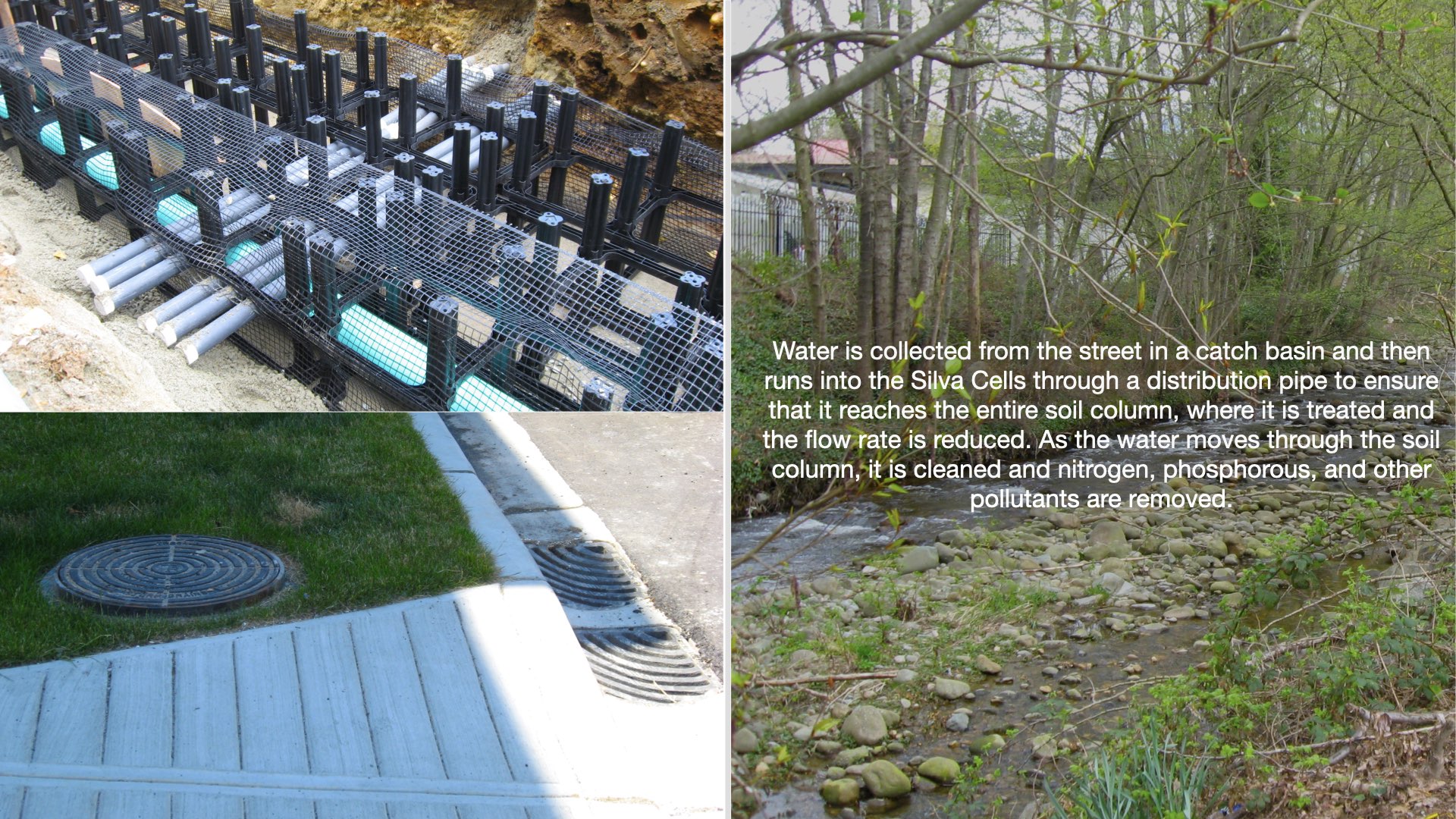