7 years. 13 years. 15 years. You’ve probably heard all of these figures (and more) applied to the true average lifespan of a street tree. So which one is correct?

According to Lara Roman, a Research Ecologist with the USDA Forest Service, the question is more complicated than it first appears. The 7 year figure comes from a 25 year old article and, according to an article Roman wrote earlier this year in an article for Scenario Journal, “A similar study published a few years later reported that downtown trees have an average lifespan of 13 years. These numbers were based on a questionnaire sent to urban foresters across the US, asking the local experts to estimate the typical tree lifespans in their cities. However, the questionnaire-based figures should be replaced with field data for a more accurate representation of urban tree longevity.”

In order to try to determine a more defensible number, Roman conducted an analysis of 11 studies that share primary field data on street tree mortality. This literature review reported survivorship – the percent surviving out of the total planted – at various years for different cities, mostly in the US, based on a comprehensive search for available data in the scientific literature. She found that the average life expectancy of a street tree is 19 to 28 years, based on typical annual mortality of 3.5-5.1%. This sounds OK initially (especially compared to 7!), but just a few trees living to old age – which are often outliers – can dramatically skew this number. Consider a cohort of 100 trees with the following ages of death:

Instead, Roman suggests that a more meaningful measure for understanding and planning for urban forests is half-life. Half-life is “the time by which half of the planted trees can be expected to die,” she explains in the same journal article. “With the typical street tree mortality rates of 3.5-5.1%… the population half-life is 13-20 years. In other words, for every 100 street trees that get planted, only 50 will make it to 13-20 years. These field data on urban tree mortality suggest that as the number of trees originally planted die over time, community foresters have to keep replacing trees, year after year, to have any chance of increasing population counts and canopy cover.” Predictions about half-life could then be used as guides to manage planting and replacement cycles. 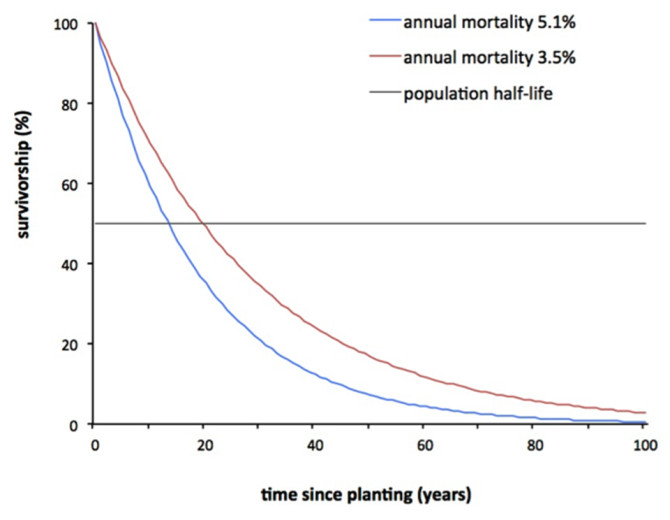 The idea that half-life may be a more meaningful measure of urban forest longevity raises some interesting questions about how we measure the success of tree planting programs and other policies to increase urban tree canopy cover. Most city-wide tree planting programs are based around the number of trees being planted – think of all Million Tree examples across the United States. Roman’s point about true survivorship, though, makes me wonder what planting one million new trees will truly get us. It sounds like so many, yet even planting that number of trees may not move the needle on urban canopy cover rates unless we also address survivorship.

Roman and other researchers and practitioners are tackling this issue through the Urban Tree Growth and Longevity (UTGL) working group. In an email to me, Roman wrote, “Through UTGL we’re hoping to facilitate more long-term monitoring and finally generate realistic survivorship curves, understand how those survival patterns vary across program types, tree types, etc., and use these analyses to target management improvements.” Turns out that plenty of people are trying to track tree mortality, but often nothing is done with the data. Even when reports are generated, they usually remain internal and never become available to researchers. UTGL is trying to change this. To become involved with the group, or share tracking data, please contact Lara directly (lroman at fs dot fed dot us)

To successfully tackle increasing urban canopy cover, we cannot speak only about tree planting; we need to speak about tree growing. We can’t speak only about average tree age; we need to speak about age distribution and half-life. Roman concludes her piece by writing, “In order to reap the benefits of urban tree planting programs, the trees have to survive, thrive, and grow, within the context of an existing urban forest population of varying ages… Let us shift the emphasis in urban forestry away from counting sheer numbers of trees planted, and towards touting exemplary records of tree survival.” I agree completely.