How ISO Standardized City Indicators Could Change the Way We Design

Cities are the cultural and economic centres of the world whose progress depends upon effective management and evidence-based policy making.” – ISO 37120 Briefing Note

“Unless someone like you cares a whole awful lot, nothing is going to get better. It’s not” – Dr. Seuss, The Lorax

Cities are growing rapidly and we all have a role to play in ensuring that they grow sustainably. 54% of the world’s population lives in cities and this number is expected to grow to 66% in 2050. It is estimated that over 5 trillion dollars will be needed in resilient infrastructure by 2030 to support economic growth and urbanization. This requires thoughtful infrastructure that can effectively service growing populations, and many cities and institutions are recognizing the need to leverage the power of open data in order to guide these investment decisions. But, until recently, most cities have been doing this in silos, using indicators, definitions, methodologies, and measuring standards that are exclusive to the needs of their departments and agencies, making it difficult to share data in a meaningful way.

But now, over six thousand years after humans first started living in cities, there is a new standard in town that is promising to help cities and citizens start connecting the dots. Meet the ISO 37120, administered and developed by the World Council for City Data. The ISO 37120: Sustainable Development of Communities, Indicators for City Services and Quality of Life, establishes a set of standardized indicators that provide a uniform approach to what is measured in the context of city indicators, and how that measurement is to be undertaken. Think of it as a common language for collecting, assessing, and evaluating city data.

You may already be familiar with the ISO, the International Organization for Standards: it is the international body that develops standards for manufacturing processes and management systems. Certification under these standards can be a useful tool in demonstrating that a product or service meets the expectations of one’s customers. In the context of a city, one can easily think of citizens as customers, insofar as citizens pay taxes to the cities they call home. So what would a tool look like that helps demonstrate and measure that a city is meeting the expectations of its citizens?

The ISO 37120 is formed of 17 themes dealing with city services and quality of life, ranging from Education to Water and Sanitation, which enable cities to measure progress on infrastructure projects over time, assess their performance, and draw lessons through comparison with other cities. Altogether, the 17 themes are comprised of 100 indicators (46 core and 54 supporting). “Core” indicators are those that cities are required to report on in order to achieve certification, and “supporting” indicators are those that are recommended. 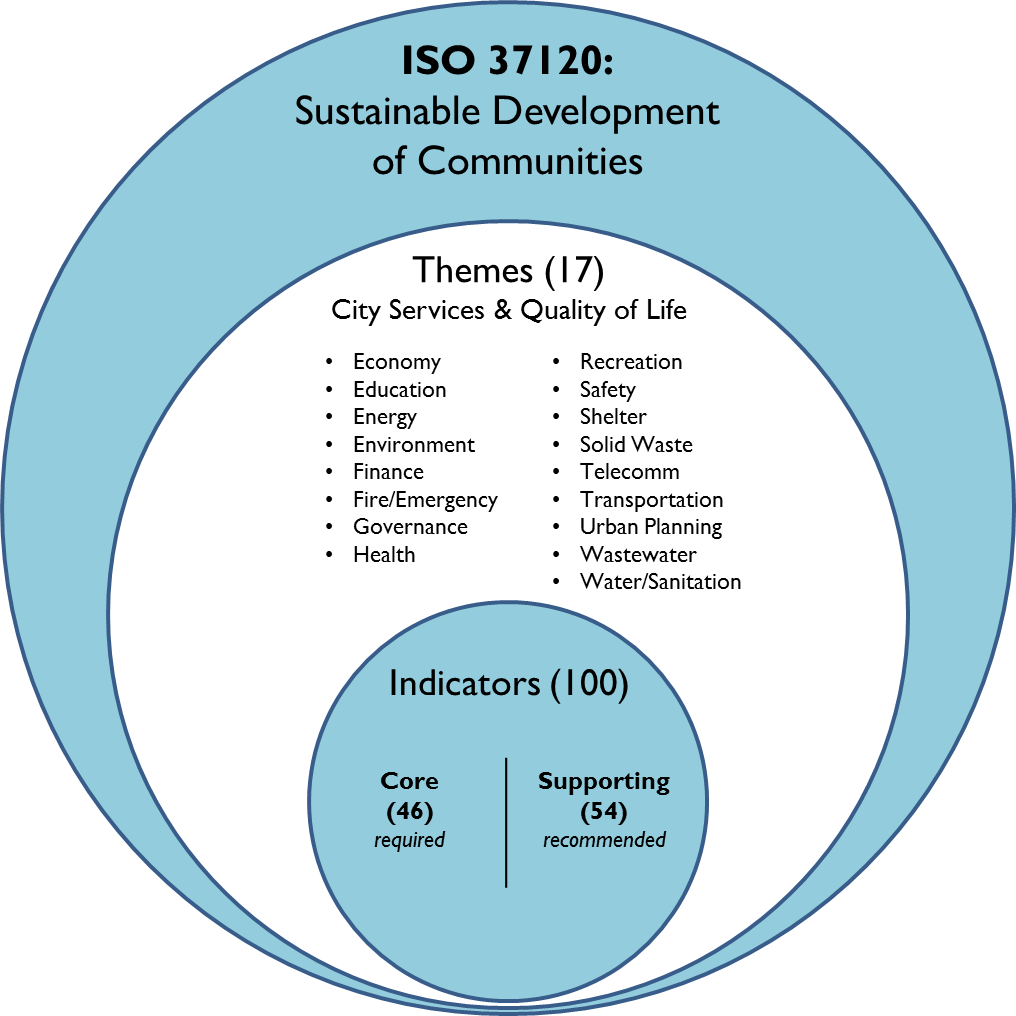 To get a better sense of the breadth and depth of the indicators, check out the city of Toronto’s results, which they have shared online. I’ve also created a document listing only the indicators (sourced from the document shared by Toronto), which you can download here.

The Value of Standardized Indicators

The primary goal of standardized indicators is to help cities make more informed decisions through data analysis. This very broad idea can be broken down as follows (although this is by no means exhaustive):

To be clear, certification under ISO 37120 does not involve ranking and does not mean that cities achieve a minimal threshold of value for any individual indicator. In that way it is not like LEED, or BREAAM. Rather, certification under the standard only means that a city has collected the data, and that the data has been verified by a third party audit. Certification also requires cities to release the data publicly.

Who are the users?

ISO 37120 is applicable to any city, municipality, or local government worldwide. It is a tool for: 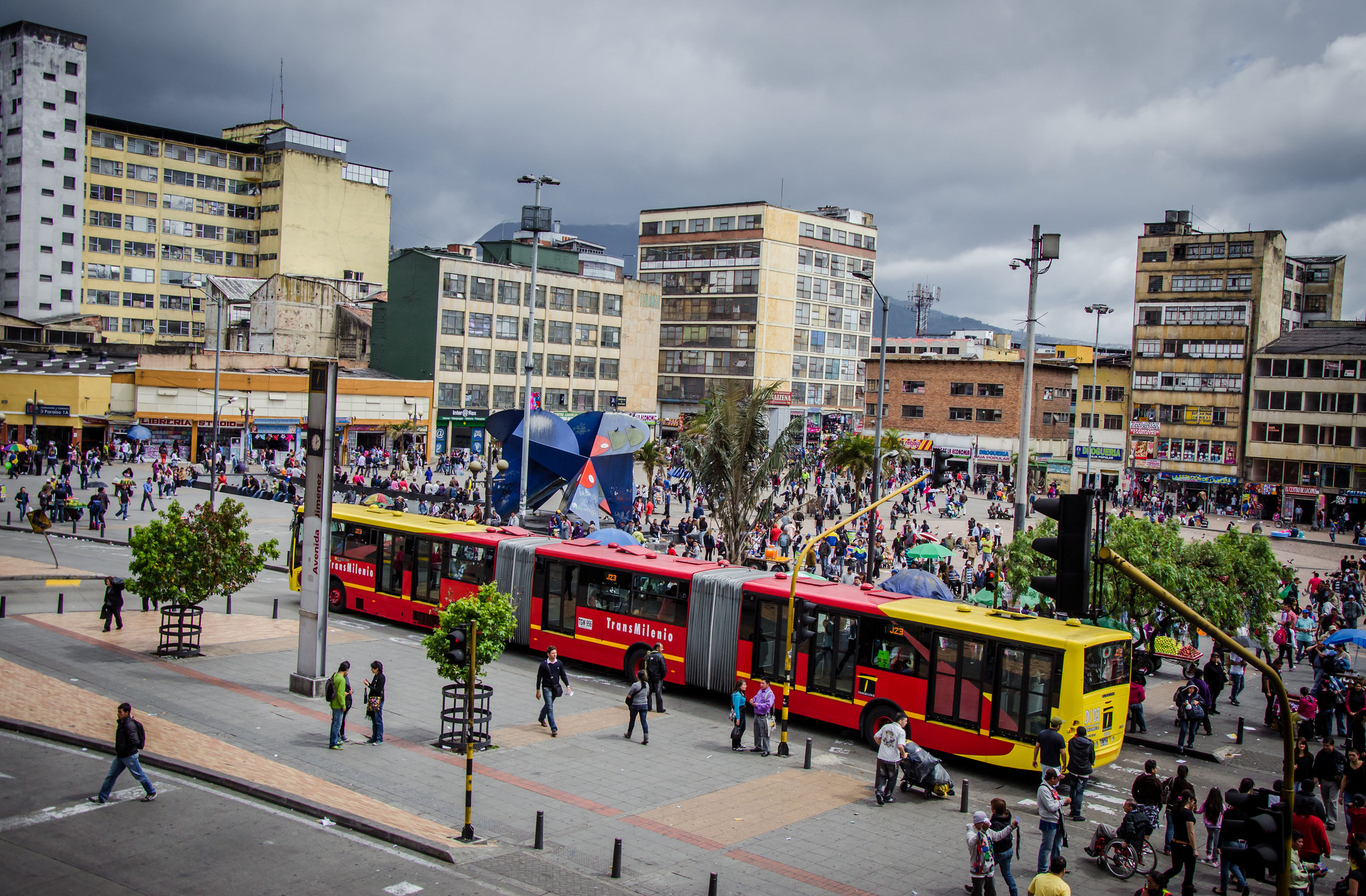 Bogota, Colombia is one of the 20 pilot cities rolling out the ISO 37120 city indicators. Flickr credit: Ronald Hurtado (CC BY-NC-SA 2.0)

Given the tremendously important role that trees and green infrastructure play in the health, function, and sustainability of cities, I’m pleased to see that The Urban Planning category of the standard does contain a supporting (recommended) indicator regarding trees:  “Annual number of trees planted per 100,000 population.” This section also contains the core (required) indicator: “Green Areas (hectares) per 100,000.”

Given the wider goal to help guide cities to make sound, informed decisions about investments in infrastructure as they pertain to quality of life, I wish that the Urban Planning theme more directly addressed the value of trees as infrastructure, especially in terms of managing stormwater, and that a different measurement was used for urban forestry rather than simply addressing the quantity planted in a given year. Any reader of this blog knows that simply planting a large number of trees is not enough; they must also be planted into hospitable growing conditions that enable them to reach maturity. The current measurement does not address the manner in which the trees are planted, and makes it possible for a constant supply of replacement trees to count toward the overall number. Moreover, having raw hectares of green space as the core indicator while trees factor in only as a supporting indicator suggests a higher functional value for green space as compared to the urban forest, and this valuation is fails to take into account the current research that shows the numerous societal benefits that trees bring to their communities.

I asked our colleague (and frequent contributor to this blog), Peter MacDonagh, FASLA, for his insight on these indicators and he was similarly pleased that the relationship between trees, the landscape and the economics of social institutions was acknowledged through the indicators. “Hospitals and prisons are the most expensive types of social infrastructure around,” he remarked, “why not keep people out of those places as much as possible by designing spaces that keep people safe and healthy? We can plant 5 trees in hospitable growing conditions rather than hiring a police officer. Because when we plant trees properly, they create spaces that significantly lower the stresses of a city’s inhabitants, which are a great deterrent for crime.”

He went on to propose, however,  that percentage of Urban Tree Canopy Cover (UTCC) be added as a core indicator, potentially replacing the Green Areas per 100,000 population indicator entirely as the core indicator for Urban Planning: “There are numerous peer reviewed studies (see Wolf[1], McPherson[2], Nowack[3],Ulrich[4], Sullivan/Kuo[5]) that show that UTCC as a percentage of total land cover of a city is a much more reliable indicator of health, crime, hospital recovery, real estate values, children’s comprehension levels in cities, car speed, safety (pedestrian, bicycle), real estate values, reduction of heat island, than raw hectares of green space alone.”

Upon examining the “Water & Sanitation” theme in the ISO 37120, I was surprised to see that there is no mention of a Separate Dedicated Stormwater System either for emergency flood control of large storms (conveyance) or for the infiltrating/harvesting of small storms for green infrastructure. 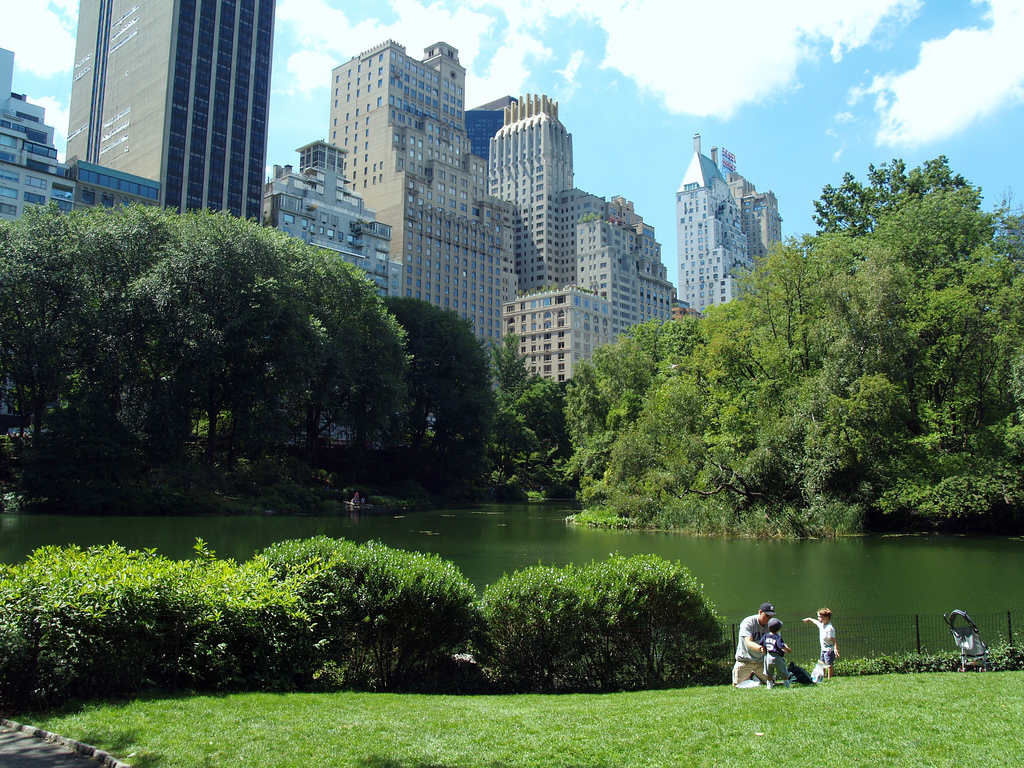 Peter agreed, saying that more cities should have a completely separate stormwater system that is not connected to the sewer, and recommended that the utility of trees as stormwater control measures not be overlooked because there is a significant linkage between them. “If a city has a stormwater system separated from sewer and a higher UTCC,” he says, “the system will absorb and treat more stormwater than it would with a lower UTCC. Focusing on the smaller storms and taking them offline using trees will allow a city to effectively enlarge their storm sewer system without installing larger pipes, and also help them to keep more pollutants from being discharged into waterbodies following storms, because pollutants can be absorbed by the trees and soils instead.”

What is bottom line for the city?

A key component of the ISO 37120 is helping cities to make smart decisions regarding infrastructure and securing investments for this infrastructure. One of the most common means of financing infrastructure is through selling bonds. One can imagine that an ISO 37120 certified city will be able to leverage their certification to secure lower rates from the agencies that evaluate credit for cities that are issuing bonds. An ISO 37120 certification and the resulting data would enable lenders to examine a city’s performance in more detail, on an annual basis, and also demonstrate that they have a system in place for monitoring and measuring their services and infrastructure investments. And this is easier on tax payers because they pay less to build and maintain the infrastructure.

Having trees included at all in this standard, albeit as a supporting indicator, is a huge win for the urban forestry community and will help participating cities remain aware and cognizant of the value that trees add to their communities. That said, there is a new standard currently in development – the ISO 37121: Indicators for Sustainable Development and Resilience in Cities, which includes new themes such as “changes in rainfall and storm surges,” “green buildings,” and “resilient infrastructure,” which I hope will include some of the recommendations listed above.

In the meantime, cities worldwide would be remiss not to get onboard with the ISO 37120 to start reaping the benefits of global, standardized indicators and methodologies. It’s not only a matter of benefitting one’s own city, because the data from registered cities will be made publicly available for other cities, and citizens all over the world, to use and learn from. Personally, I’m also very excited about how this data could be put to use by artists and designers, helping to create further awareness about urban conditions and performance, and how citizens interact with the urban environment. Projects like the Data Canvas, a media network that promotes public education around civic issues through facilitating urban data visualization competitions and streaming urban data stories to street level displays in public spaces, could have a field day with this data. And I can imagine movements like Pop Up Urbanism, which use temporary urban installations to gather feedback from the public and test various improvements, could interact with the data sets and evaluations in myriad ways.

Hopefully by now you’re asking yourself: How do I, or how does my city, get involved? What is the process?

All cities throughout the globe are eligible, and cities need to update data annually to be recertified. The process is as follows:

Call your city hall and tell them you want your city to get certified under the ISO 37120!

[2] For example: “A New Approach to Quantify and Map Carbon Stored, Sequestered, and Emissions Avoided by Urban Forests”

[3] For example: “Tree and Impervious Cover Change in US Cities”

[4] For example: “View Through a Window May Influence Recovery Time from Surgery”

[5] For example: “Environment and Crime in the Inner City: Does Vegetation Reduce Crime?”