As an arborist, horticulturist, and landscape architect I’ve given a great deal of thought to plant diversity over my career, and this practice of only planting a single species is something that has always bothered me. I call this condition we landscape architects suffer from Simple Single Species Syndrome Sickness, or S5. Since Andre Le Notre laid out the Sun King’s grounds at Versailles in the 16th Century, trees planted in lines induces this syndrome in us landscape architects. It’s as if the last 120 years of ecological thought, research, and observation had not penetrated our profession. What’s so bad about every tree in a row not looking exactly the same as the tree beside it? Why are we landscape architects so obsessed with the look of rows of a single species of tree?

I’ve heard the words “simple and clean,” swollen with pride, used to justify these monocultures. This is design code for “all the same species, all the same size, all the same nursery.” From a design standpoint these tree plantings may be “simple and clean,” but they are also ecologically brittle. The streets of America were once filled with majestic Elms. I have walked some of those streets, and occasionally for as far as I could see in any direction, all the street trees were Elms. Those Elm tree plantings were also “simple and clean,” but now they are just “dead and gone.”  At this moment in North America, Ash trees are undergoing a similar annihilation by Emerald Ash Borer and are being cut down by the tens of thousands. I have come to see this S5 approach as a kind of willful design indulgence. 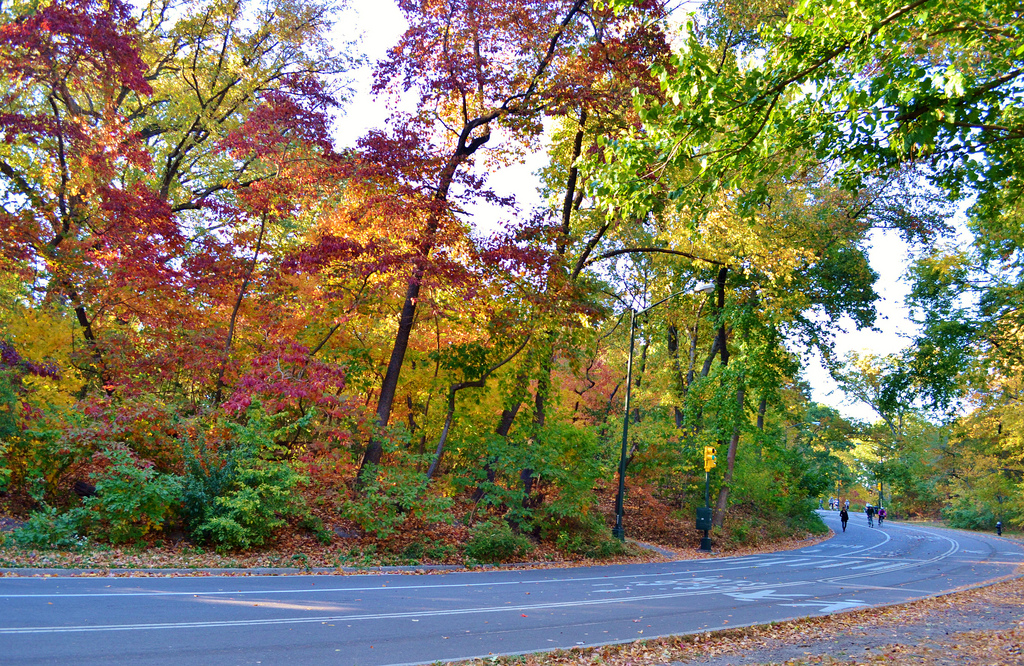 Yes, monocultures can be beautiful, but they can also be tiresome and repetitious. I’ve walked down some of the most photogenic allées of single species trees, like Le Notre’s Versailles and the Washington DC Mall. The tallest and most impressive allée I’ve ever seen and walked was an avenue of 150 foot tall Coastal Redwoods in Scotland’s Benmore Botanic Gardens. I’ve also walked what may be the Western World’s oldest surviving allée of shade trees: 500+ year old European Plane Trees (Platanus orientalis) planted on the grounds of Cardinal de Medici’s Palace in Rome.

All of these single species allées, avenues, rows, and boulevards of trees were beautiful to look at from a distance, but I find them uncomfortable to walk. Not in the sense of tired uncomfortable, but as in boring uncomfortable. The lone exceptions were the avenue of Coastal Redwoods and the ancient European Plane Trees in Cardinal de Medici’s gardens. All of those trees were at least six feeth in girth and the Plane Trees were hollowed out by age. When trees are this large or this old, they develop a very strong individual character, which I find irresistibly compelling. Hence, I stopped and looked at each individual tree. They were all the same species, but visually they were a polyculture.

However on all those other famous avenues of trees, no matter how often I have told myself to enjoy the journey, I have had instead had the nagging thought, “when will I get to the end of this row of trees?” Internally, it’s been professionally embarrassing. I have always loved trees, and I’ve been a landscape architect and horticulturist for almost 30 years, an arborist for over 20 years. I’m supposed to swoon in these places, yet I don’t.

When I walk through orchards with row upon row of the same apple trees, I get that same interminable and oppressive feeling that I get walking on those single species tree avenues. Where’s the beauty in endless rows of the same species? Because when it’s up close and personal, I don’t see it. 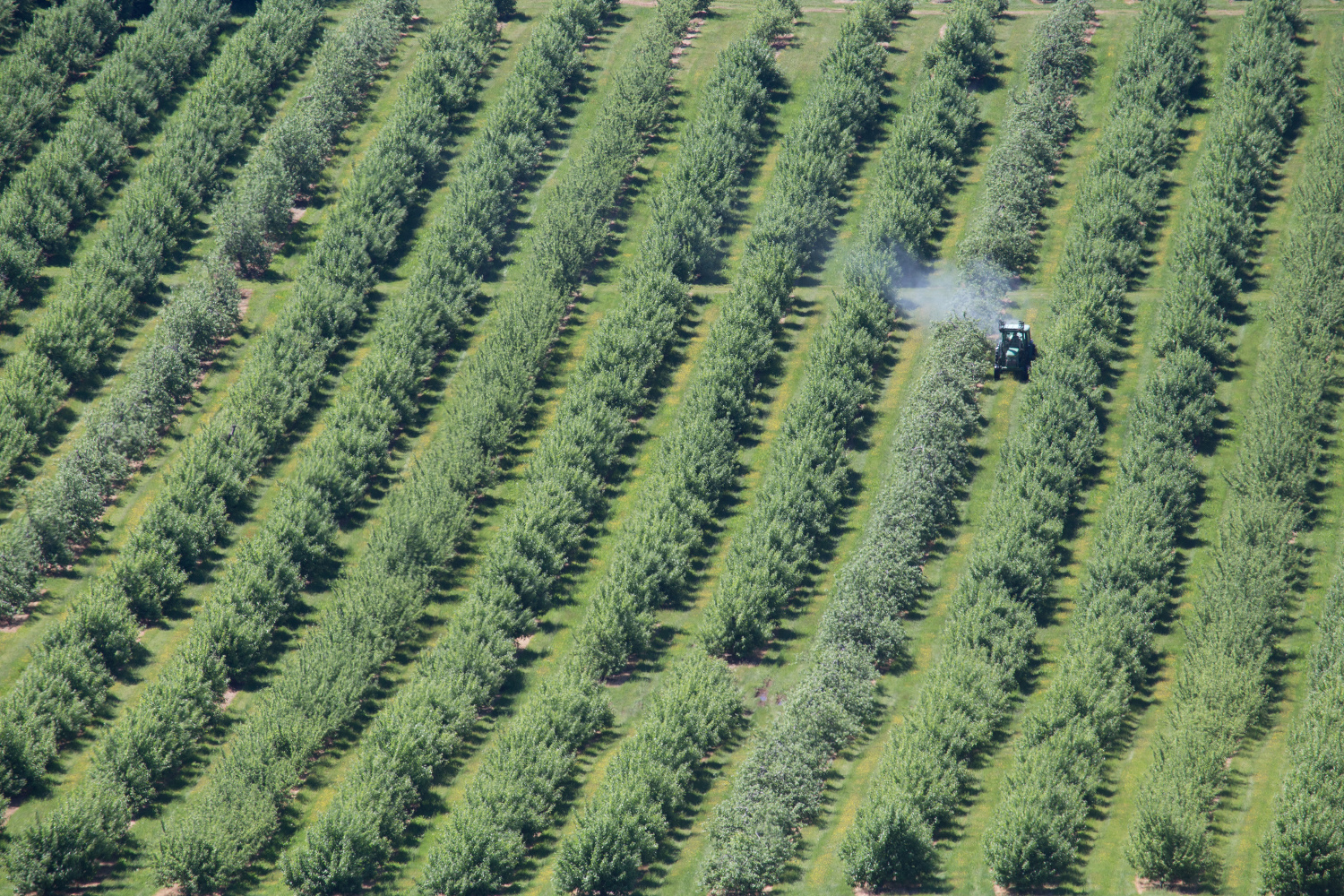 Occasionally, I’ve been in small non-commercial orchards that are organized quite differently. There are still rows of trees, but here three or four apple trees, followed by three pear trees, followed by a few cherries, plums, and hazelnuts, etc. In these types of orchards, there’s a surprise up ahead every few seconds. I find these interesting and provocative places. Thanks to the Australians, these type of orchards have come to be known as perennial polycultures.

Because I have written this blog from a design view point I have decided to use lots of pictures to illustrate my point: that rows and groves of trees with very different species and genera can be exceptionally beautiful.

Industrial scale, single tree species, modern commercial orchards (such as those growing apples, pecans, and almonds) are huge – they are measured in square miles, not acres. For these commercial orchards to produce their fruit, tools like ground water powered rotary irrigation and helicopters with spray rigs to apply pesticides are necessary. Afflictions like Apple Scab are common. They are what happens to monocultures of apple trees if they are not sprayed with chemicals several times during a fruit bearing season. 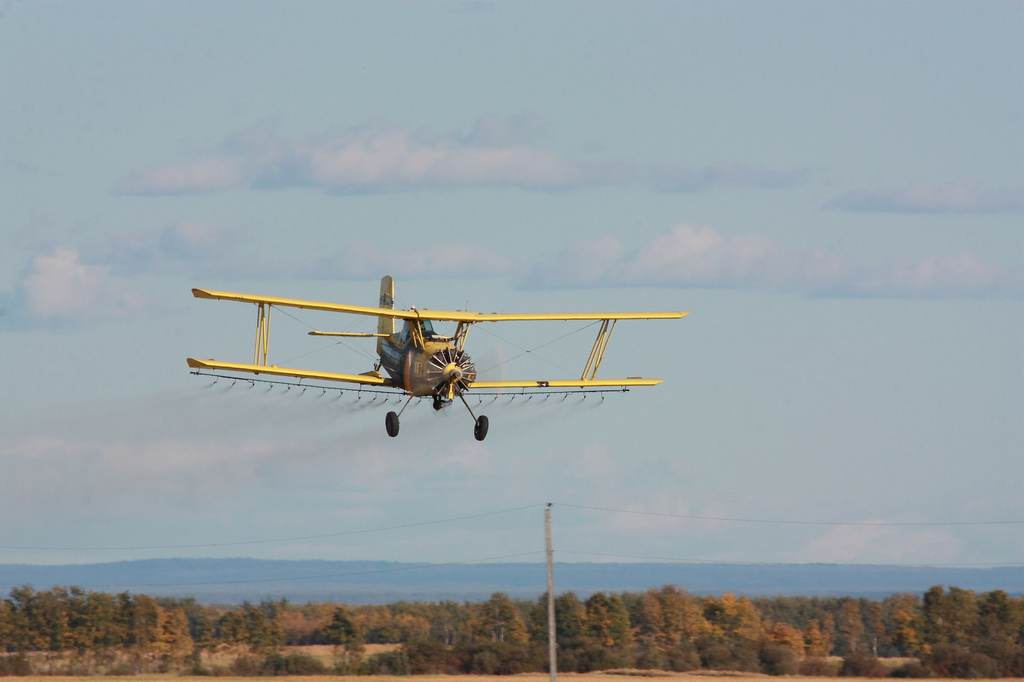 Orchards can, of course, be places of great diversity. The range of colors and shapes in such a small land area is very beautiful. These are places not designed by landscape architects, but that is not the point. The purpose of this type of orchard (called a perennial polyculture) is to reduce insect infestation risk and supply a large range of fruits and nuts to eat for the long term. I think that most would agree that these non-designed and designed tree polycultures are stunning in their beauty. They are also resilient.

The history of botanic gardens has something to teach us about the beautiful effect species diversity creates, too. Originally, botanic gardens were places where trees had to be useful if they were to be grown, thus fruit and nut trees were most common. With the return of the first English plant explorers, the father and son Tradescants, botanic gardens had a new prime directive: collect and plant as complete a catalog of trees from around the world that could potentially survive in that climate. You can tell from these botanic garden pictures that there are many tree types, artfully arranged: conifers, palms, broadleaf evergreen, and broadleaf deciduous. Most of these places were designed by landscape architects and they are quite stunning, but that is not the point. The point is that the mission of botanic gardens forced designers to blend together tree polycultures, and they did so beautifully. 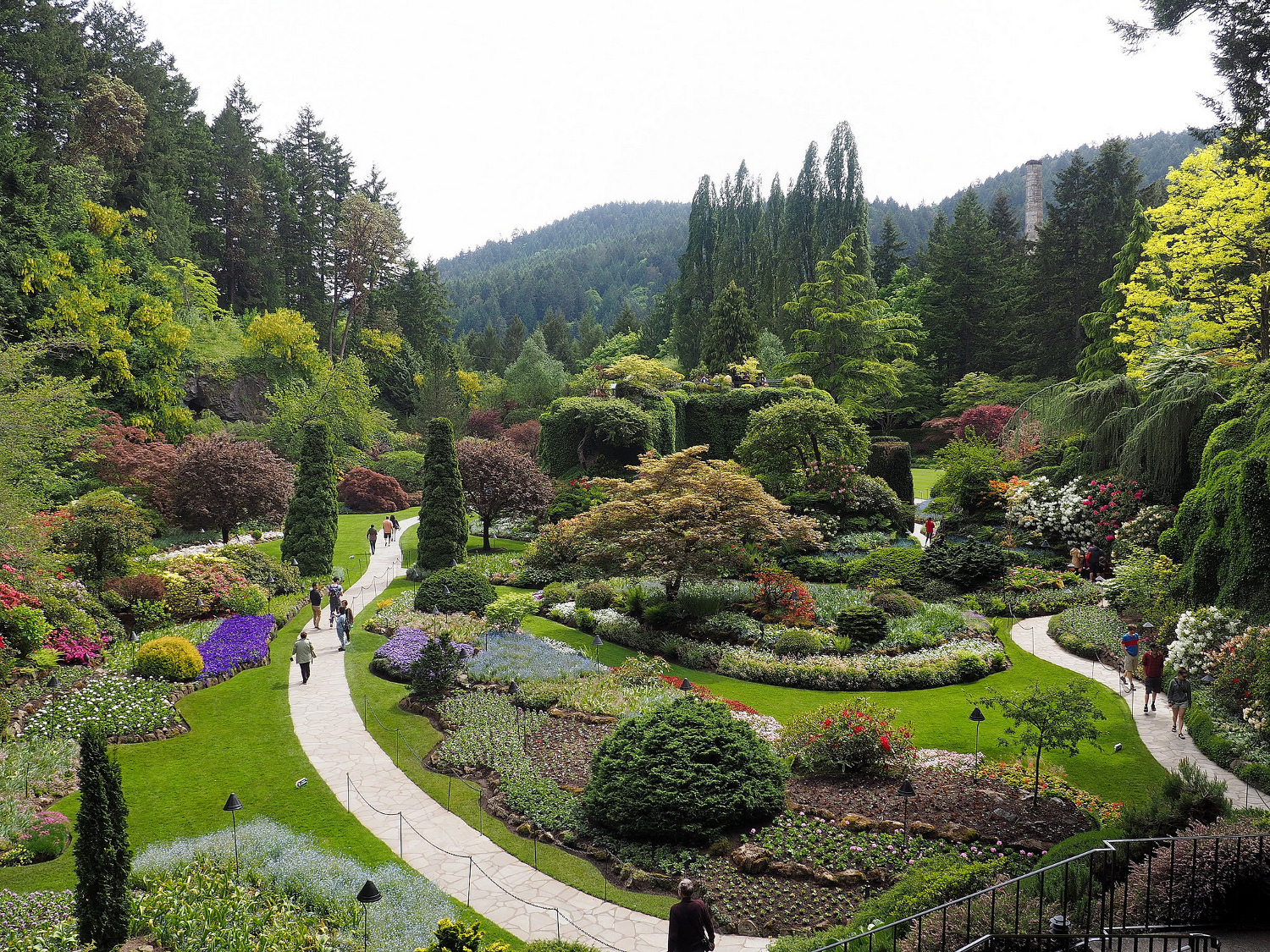 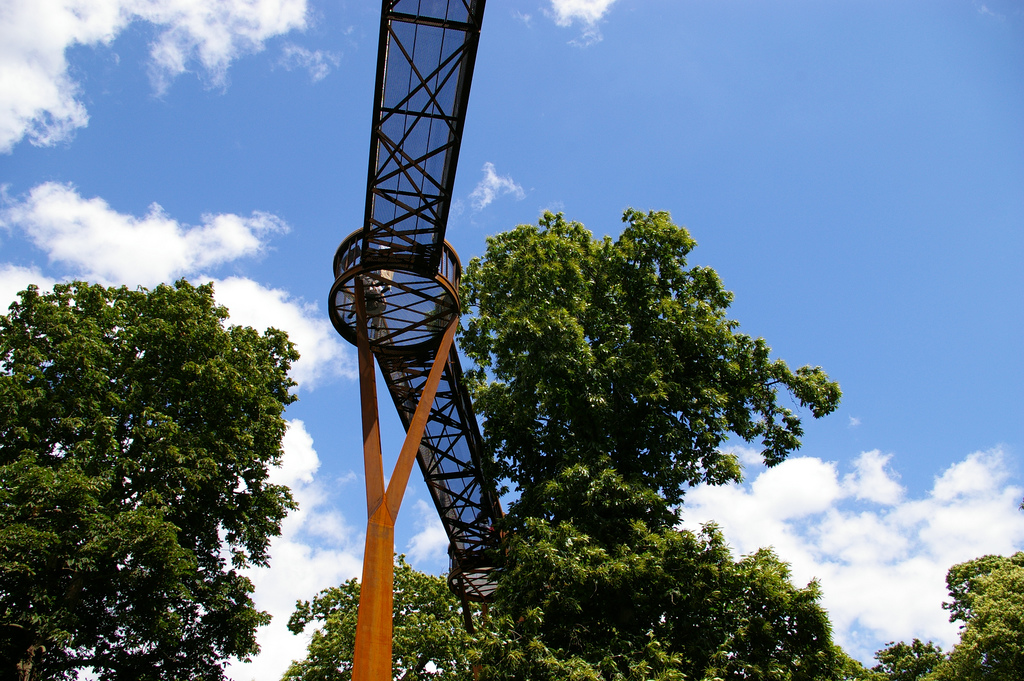 The Bay South Gardens on Singapore’s waterfront is one of the best examples of what I’m advocating. It is a tour de force of tree diversity and design (thank the designers, Grant Associates). The SuperTrees are spectacularly astonishing in an earth shattering way, inspired by Irwin’s Getty Trees and Blanc’s Living Walls. I would so like to see 150 foot diverse living SuperTrees getting large chunks of the planning budgets, and the soil and water to rival their steel counterparts in height and canopy. 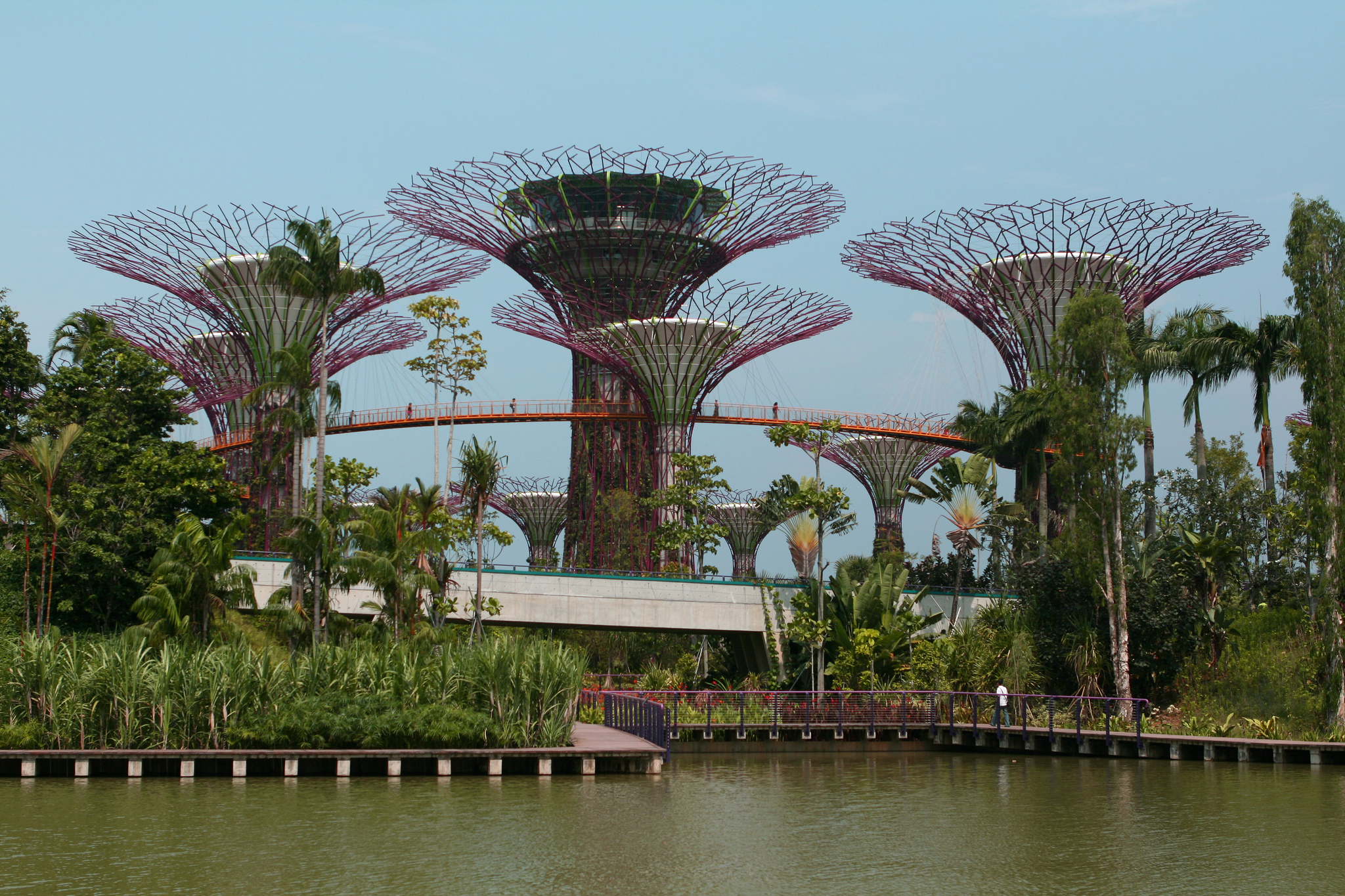 Garden by the Bay (Singapore)

I have a professional colleague in Texas – MM. MM is an arborist, not a landscape architect. Twenty years ago, at the Mayor’s request, MM led an Arbor Day planting of many thousands of trees at the entrance to a large, brand new airport. The Arbor Day planting had several genera and many species represented.

One day on the way to the airport, MM and I drove past the Arbor Day planting, and he told me how he selected this diverse assemblage of tree genera and species. The criteria were simple: pest resistant, thrive in heavy clay silts, look good growing together, very drought resistant, and a wide mix of needle evergreens, broadleaf deciduous, and evergreen trees. This huge arboricultural green screen is now about 30 feet tall and, for me, is the star of this airport’s landscape – robust and reliably green.

So this is my ask: let’s have allées, avenues, boulevards, and groves of richly diverse tree species in our cities that are complimentary in shape, form and color. These can be urban tree plantings equipped to face the ecological and climatological realities of the 21st Century. We can and must do better or we too, like the Chestnuts, Elms and Ash before us, will be displaced and replaced – and designing landscape scale rows of trees will, unhappily, be assigned to others.

This is part one in a series about species diversity in the urban forest.