History of Street Trees in Holland Part 4: The Model Dutch City Moves to the Colonies 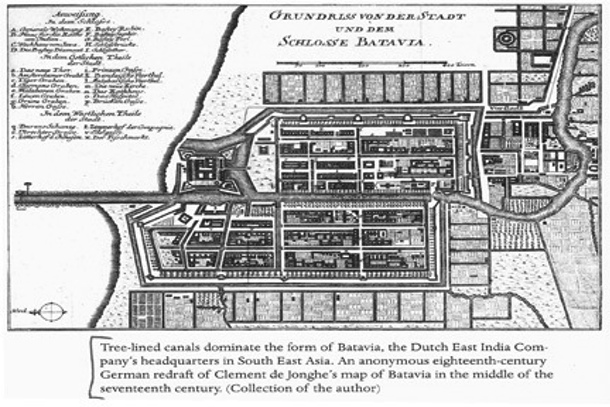 Today is the second to last post of Peter MacDonagh’s five part series on the history of street trees in Holland. In this one, the Dutch expand their master planning to their pesky colonies. -LM

Eventually the Dutch East India Company (VOC) controlled colonial trading cities in Asia, Africa, South America, and New Amsterdam in North America. The VOC needed thse trading cities, which served as administrative centers. The Dutch had demonstrated that they were remarkably thoughtful city planners, transportation designers, and urban horticulturists with their vast network of tree-lined canal systems. So how did they do abroad?

The Dutch were master cartographers, and many were hired by the VOC to provide city layout templates. These maps are instructive, but unfortunately Dutch masters such as Jan Van Der Heyden and his beautifully painted Amsterdam canal scenes (shown in Part 1 and Part 2 of this series) did not travel to paint city scenes in the far flung Dutch colonies. It was too dangerous for artists; they had to stay in Amsterdam. Meanwhile, the VOC transposed their model city template, Amsterdam – with its well paved streets and canals, lined with trees, homes and warehouses – to their new colonial cities.

Large canals run through several streets of Batavia whereby it is rendered both neat and cool. On each side of this canal is planted a row of fine trees that are always green, which, with the beauty and regularity of the buildings, make the streets look very agreeable so that I think this city…one of the neatest and most beautiful in the whole world.

It’s tempting to believe that this level of arboricultural care was limited to Holland’s most important colonial city of Batavia. However, maps of other Dutch colonial cities show streets and canals lined with trees: Kaapstad (Cape Town) in modern South Africa; Paramaribo in Brazil; Ambon and Surabaja in Indonesia; Cochin in India; and Gale and Colombo in Sri Lanka (formerly Ceylon), which is currently Sri Lanka’s capital.

“Ahhhh, but those are just city maps,” you say,” the Dutch could have drawn anything on their plans. It wasn’t really like that, was it?” But it was. Here is how a British officer described Colombo in a letter written in 1757, when it was still under Dutch control:

The streets are very wide with a beautiful Row of Trees on each Side, and between them and the Houses is a very smooth and regular pavement. Between the Trees is a very fine Verdure (lawn)…and ye whole so elegantly dispos’d (sic)…that we could not help admiring ye Wisdom and Genius of ye Dutch.

Finally, a traveling Englishman named John Barrow saw Cape Town (Kaapstaad in Dutch) in 1797, when it had just recently acquired from the Dutch by the British Empire. He observed that

The town…built with regularity and kept in neat order, is disposed into straight and parallel streets, intersecting each other at right angles. Many of the streets are open and airy, with canals of water running through them, walled in, and planted on each side with oaks…” Based on Barrow’s next description of Stellenbosch, 30 miles from Cape Town, these street and canal tree plantings were getting adequate soil volumes, “…It is laid out into several streets or open spaces, planted with oaks that have here attained a greater growth than in any other part of the colony, many of them not being inferior in size (same size) to the largest elms in Hyde Park (London).

L. Peter MacDonagh in the Director of Science + Design at The Kestrel Design Group.