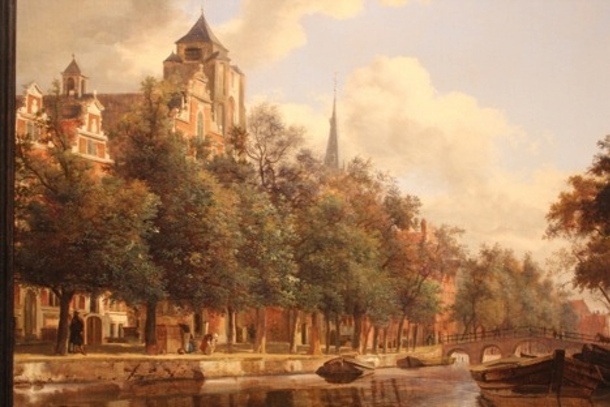 Here is Part 2 of Peter MacDonagh’s series on the history of street trees in Holland. Peter’s knowledge is incredible; I promise you don’t want to miss this unusual history of Holland through its trees. -LM

The Low Countries, as one would guess, were perpetually wet – abounding with swamps, marshes and bogs. To increase arable land for food, the inventive Dutch decided to create land from scratch. Canals were used to drain out the marshes and wetlands. Windmills pumped the water away from these “polders” (new land) into the canals. Further drying and stabilizing of these new lands was done with trees along the margins of the canals. Trees, with their high evapo-transpirative capacity, also pumped out water from the new land via solar energy. Thus the Dutch, with the help of wind and trees, hand-built their country – a garden, really.

Canals became the fresh water superhighways for transporting spices into the Low Countries’ rising cities: Antwerp, Amsterdam, The Hague, Rotterdam, Liege, and Delft. The Dutch mastered a process of urban and rural “barging.” This system moved high value goods, in large quantities, to be consumed locally or exported. This “barging” economy created a multiplier effect, which was further amplified by the early 1500’s with New World trade goods (coffee, tea, chocolate, tobacco, jewels).

Windy Holland added a twist to using barges – sails, very occasionally supplemented with horses. These floating barges (horse-drawn barges were the original one-horse-power engine) transported goods from ocean-going ships in tons, not pounds. As an example of barge efficiencies, horses were capable of pulling loads 10-20 times their weight by barge, versus what that same horse could pull in a wagon. This full order of magnitude rise in volume of goods moved catapulted these Lowland cities towards tremendous wealth.

Famously flat Holland had no visual cues on its landscape to show barge pilots where their canals were relative to each other, nor any way to judge distance or to signal an oncoming barge at an intersecting canal. Floating barges achieve forward momentum slowly, and require the same amount of time and distance to slow and stop. Barges don’t have brakes, they use either ropes tied to towhorses on the towpaths, or in windy Holland, sails.

The horticulturally inclined Dutch flanked their countryside canals with rows of evenly spaced, fast growing, water loving (hydrophytes), limbed up trees: Poplars (Populus), Lindens (Tilia), and Willows (Salix). These tall, highly visible trees provided a perfect canal signal system for Dutch barge boat pilots on the flat “polders.” For example, oncoming barges could see that 12 trees to the canal intersection, planted 50 feet on-center, was 600 feet for one barge, 9 trees for the other barge. The 9 trees barge is 450 feet away from the intersection, therefore the closer barge has the right-of-way.

These hydrophytic trees demanded massive amounts of water, and they dried out and stabilized sloughing canal banks damaged by waves, bumping barges, and horse’s hooves. When the treed barge highways of the countryside moved into the cities, they brought their tree signal distance markers with them. Landscape Architects, and our aesthetic obsession with evenly spaced trees, is actually a result of the more mundane intersection “Yield” or “Stop” sign of Holland’s canals.

For 15th, 16th, and 17th century visiting scholars, artists, and military engineers, these tree-lined canals signified the fast growing success of Holland, whose earlier soggy landscapes had earned the disparaging sobriquet of “Netherlands.” These were almost miraculous signs of success, which travelers wanted to convince their countrymen back home to pursue. The message was simple: tree-lined canal systems could pave the way for home country wealth. This is the rise of a merchant (i.e. middle) class in cities, based on trade rather than land ownership, who enjoyed the simple pleasures of tree lined allees over ostentatious building ornamentation.

Lawrence, H.W. 2006. City Trees: A Historical Geography from the Renaissance through the Nineteenth Century. University of Virginia Press. Charlottesville VA.