Today’s post is an interview with Drew Graham, a Landscape Architectural Intern at Brodie & Associates Landscape Architects in Toronto, ON. As an MLA student at the University of Guelph, Drew studied how heat-related emergency calls were distributed throughout the city. What he found was that areas with low tree canopy cover had significantly higher heat related emergencies and deaths than areas with more canopy cover. In his thesis, he analyzes this relationship and discusses how cooling strategies such as more and larger urban trees can help improve human health outcomes. -LM

The title of your thesis is “Census Tract-Level Outdoor Human Thermal Comfort Modelling and Heat-Related Morbidity Analysis During Extreme Heat Events in Toronto: The Impact of Design Modifications to the Urban Landscape.” Can you put that in terms anyone can understand?

I’m looking at the relationship between the urban landscape and human health, specifically how humans respond to extreme heat events such as heat waves, and what role the landscape can play in that heat-health relationship.

How did you decide to study this?

This thesis was part of my MLA degree program at the University of Guelph, but previous to coming to landscape architecture I had studied applied health sciences and was interested in pursuing an academic career in that industry. I later realized that wasn’t quite right for me. I wanted something more pragmatic that could be applied to real-world problems. Landscape architecture has fit a lot of what I was looking for, including being able to tie in my health science background.

What exactly is an extreme heat event?

The jury is out of what constitutes an extreme heat event; there is no consensus. Some people use strict temperature guidelines over a certain duration, others use Humidex (“real feel”). Toronto has their own classification system which is a computer model that examines the weather forecast and compares it to historical data on deaths due to heat. So if that model comes up with a forecast that estimates a greater amount of people could die due to heat, then the city will issue an alert.

I chose that system to classify a heat-event or heat-wave because it took into account human health rather than just a temperature reading. It’s also a highly regarded system.  It’s more sophisticated and probably more costly, but ultimately is a better system for informing people of true environmental risk.

Your thesis findings indicated that heat-related emergency calls were negatively correlated with canopy cover – in other words, areas of the city with more trees had fewer emergencies during extreme heat events. Is that correct? 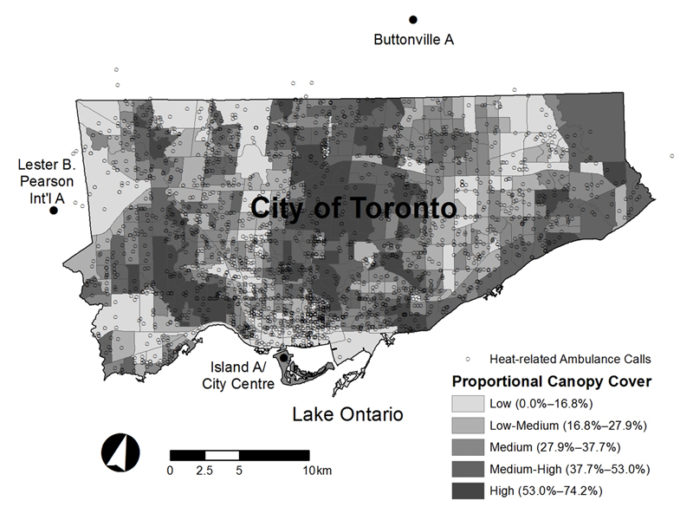 Yes, that’s right. I limited my data analysis and modeling to the city of Toronto, and I found that areas with more trees experienced fewer heat-related emergencies and vice versa.

In your paper you refer to “cooling” design strategies to help reduce the incidence of these heat-related emergencies. What strategies are you referring to?

There are lots of things you can do to improve the microclimate. I focused on ones that provide shade, specifically trees, but you can also use shade structures and the orientation of buildings.

In terms of the computer modeling that I did, there were a lot of inputs I could have adjusted to try to cool the landscape. One that I looked at was providing more reflective materials in the built environment. On the ground, for example, that could mean using materials other than asphalt or dark concrete pavers to increase reflectivity. On roofs, that could mean painting them white to deflect incoming solar radiation or planting them with vegetation as in a green roof. All of these design strategies influence what a human would feel as a cooling effect.

Thermal comfort is a term that’s used often in modeling (computer-based) analysis, and it refers how hot or cool someone feels in a microclimate. Picture yourself standing outside on a nice warm, sunny, day. You’re receiving a lot of direct heat from the sun as well as heat from surrounding buildings and pavements, so in that environment you might feel too hot and want to feel cooler. A cooling design strategy allows you to implement changes in that local environment to help achieve that.

“Thermal comfort” is subjective at the individual level – what makes one person too hot might feel just right to someone else. But at a larger data analysis level, we can actually model thermal comfort very effectively. For the purposes of this thesis I used a computer model to estimate thermal comfort. Temperature is a big factor, but there are many others, such as radiation from the sun and from hot objects in the environment, that affect how comfortable someone feels. The model I used attempted to take all those factors into account to predict someone’s thermal comfort anywhere in Toronto during a heat wave.

According to your analysis, cooling design strategies resulted in an estimated 40 to 50 percent reduction in heat-related ambulance calls. Does that refer to modeled data, or actual data?

It refers to both. Basically I took two areas of Toronto and redesigned them, comparing the existing conditions to the redesigned conditions on the basis of human thermal comfort. 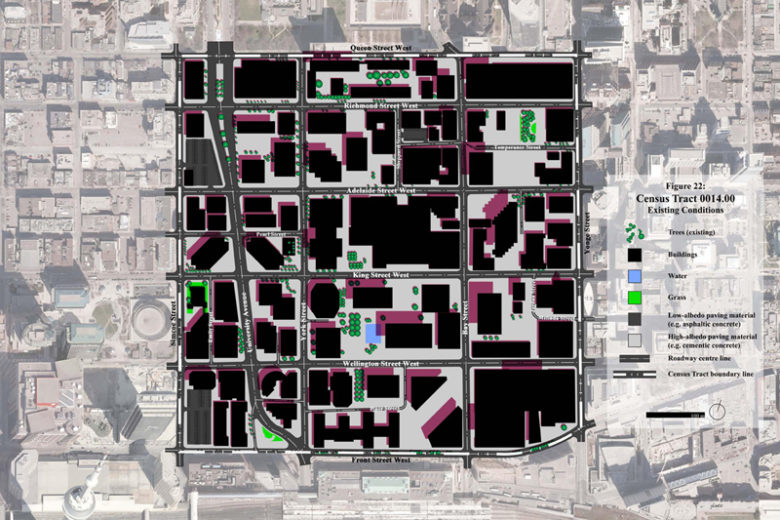 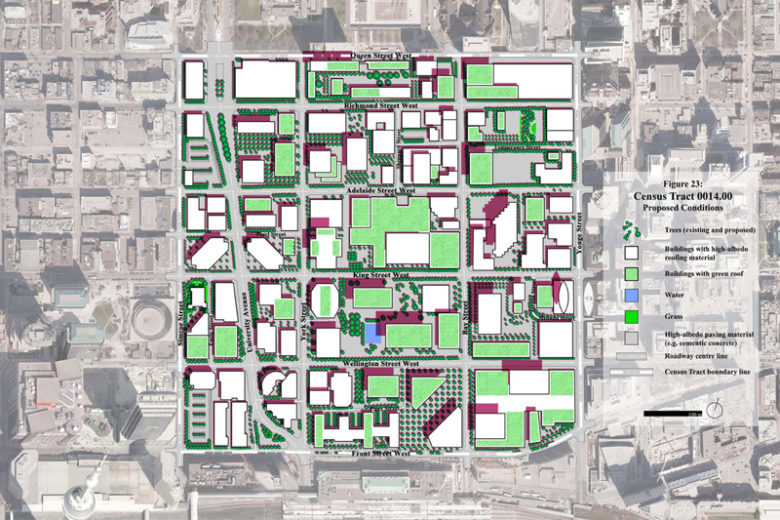 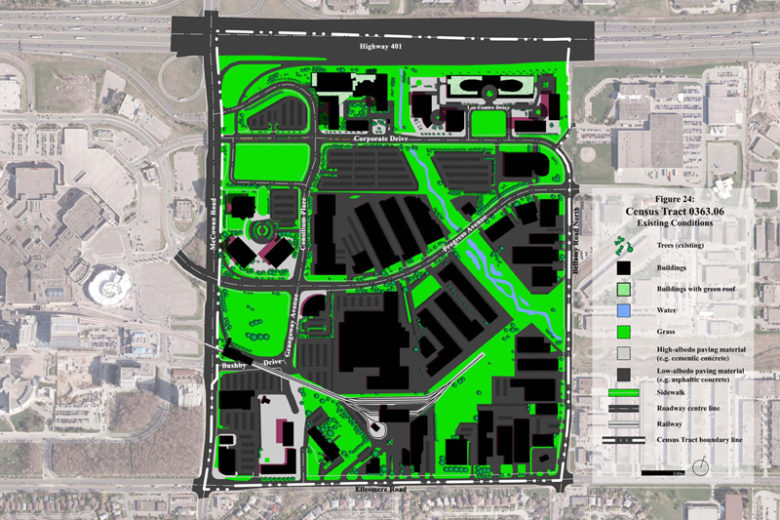 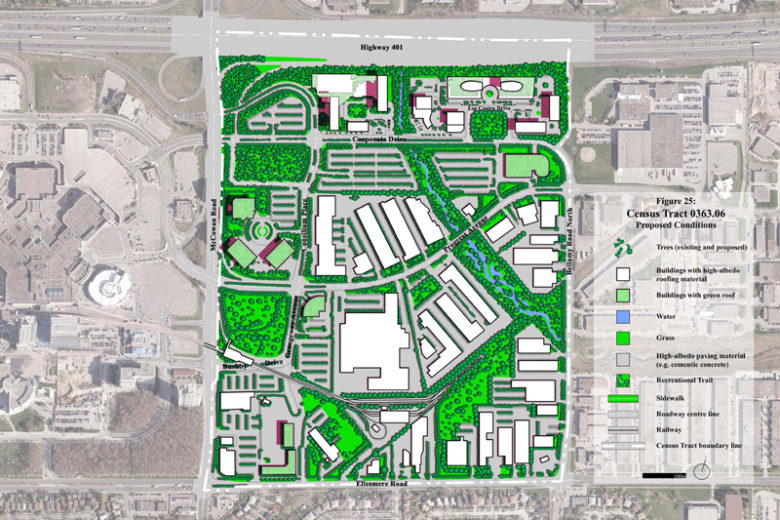 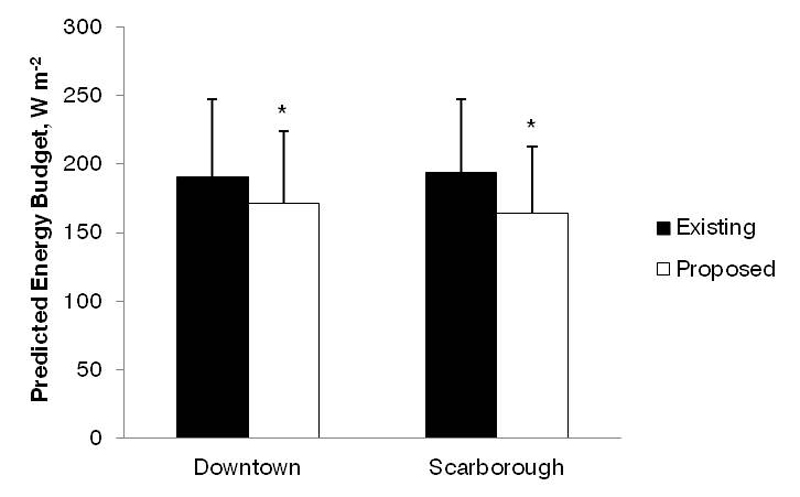 Predicted energy budgets were lowered when cooling strategies such as trees were implemented.

Then I would compare the number of calls I would estimate to see in those redesigned areas based on what the actual call data showed. The analysis was based on the relationship I had seen between canopy cover and ambulance calls, which is negative. So by providing more canopy in a given area, I could theoretically create an area with lower incidents of heat-related illness. It’s an estimate, but an informed estimate.

Was there a tipping point for the minimum amount of canopy cover that made a difference in the emergency calls?

Based on the data that I collected and analyzed, it seems if you go over 10% canopy cover, you get an immediate and dramatic drop in the number of heat-related ambulance calls. As you increase beyond 10%, you still see a decline in the number of calls, although it is less dramatic. But the more canopy cover you can add, the better. 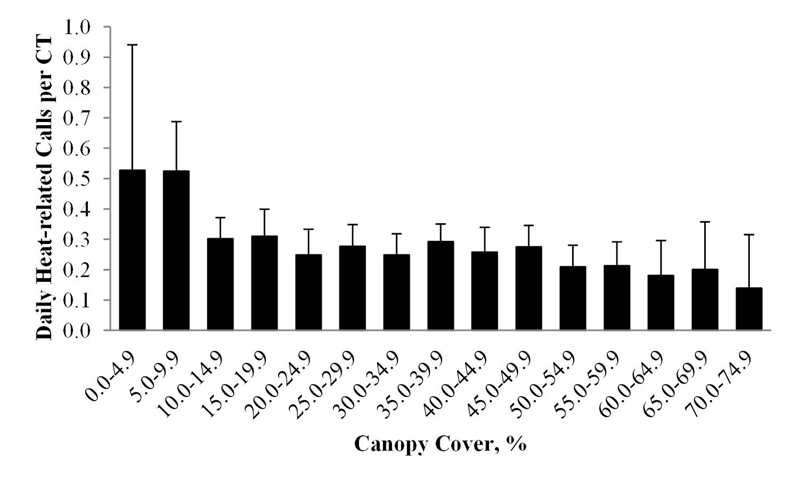 As canopy cover increases, the number of heat-related emergency calls goes down.

If you were describing how your research could be applied to a city planner or mayor, what would you tell them? What would you like to see come of your work?

If I had to say one thing, it would be: plant more trees. If I had more time, I would say plant more trees in specific areas of concern, like areas where there is lower canopy cover, as well as areas where people are likely to congregate on hot days.

I’d also argue there are lots more benefits than costs where trees are concerned, and there are many ways to improve your city’s canopy cover. Simply planting a tree in a traditional sidewalk opening is better than nothing, but it’s not the best solution. There are better designs that initially cost more to install but, in the long term, are very beneficial in terms of tree longevity and therefore to the larger community.

Drew Graham would like to thank the Toronto Emergency Medical Services for providing the ambulance call data for this study. You can read his full thesis here. All figures courtesy of Drew Graham.