Google Earth is so much fun to explore. You can really and truly get lost in it, the feeling of “traveling” somewhere on your screen that you’ve never been in person. I recently saw that they’ve applied the same approach to creating a timelapse tool for the earth from 1984 to 2012 called Earth Engine.

According to the Earth Engine website, “each frame of the timelapse map is constructed from a year of Landsat satellite data, constituting an annual 1.7-terapixel snapshot of the Earth at 30-meter resolution. The Landsat program, managed by the USGS, has been acquiring images of the Earth’s surface since 1972. Landsat provides critical scientific information about our changing planet.”

For example, the image at the top of this post shows Houston, TX in 1984. The one below shows Houston in 2012: 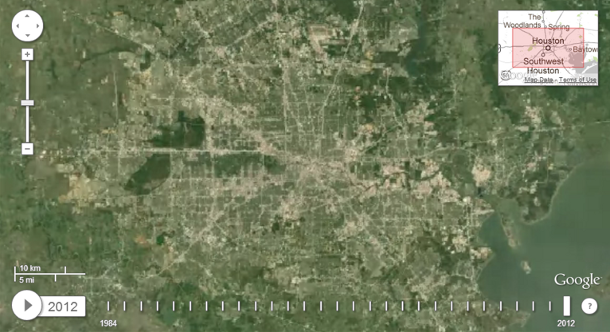 I spent some time looking at other cities in the world. Here’s Shenzhen, China, in 1984, when its population was around 200,000: 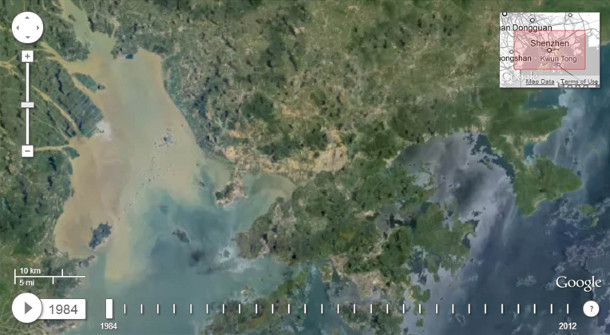 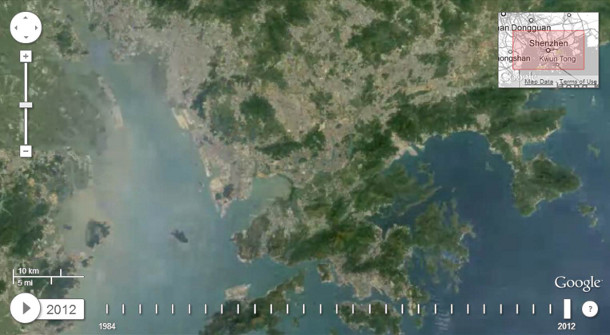 I was particularly focused on noticing a reduction in green areas, but there are lots of details to pay attention to, most of them pretty depressing.

You can play around with this yourself – it’s as easy as typing a location in the search box at the top of the page. Google has also picked out some of the most dramatic transformation, including the drying of the Aral Sea, the creation of artificial palm islands off the coast of Dubai, crop circles in Saudi Arabia, coal mining in Wyoming, the retreat of Alaska’s Columbia glacier, and the deforestation of the Amazon rainforest.

What do you notice when you search for your city or town?