Enlisting Wasps in the Fight Against EAB 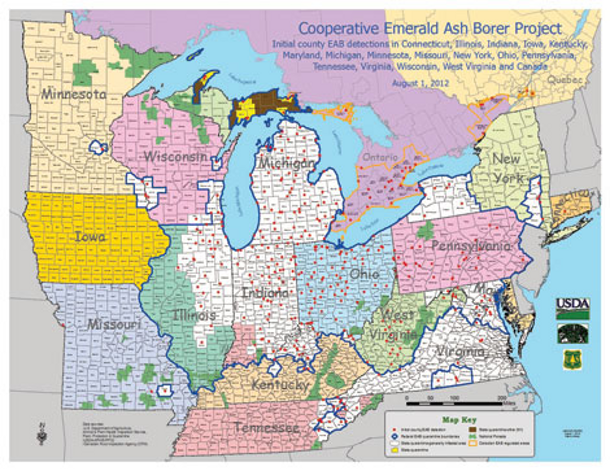 According to Bartlett Tree Lab’s latest newsletter, a new method of monitoring the spread of the catastrophic emerald ash borer (EAB) uses wasps.

The way it works is quite simple: Female wasps (Cerceris fumipennis) capture and sting beetles before taking them back to their nests. Rather than letting them enjoy their dinner, entomologists collect the beetles from the wasps – poor wasps.

Since wasps are far better at finding emerald ash borer beetles than humans, this is a significant breakthrough in early detection. Colonies of wasps are even being transported around to areas where the presence of EAB is suspected by a program called WaspWatchers.

The wildlife-lover in me is both excited and a little concerned with this arrangement. On the one hand, excellent to be saving trees that are under such serious threat – and doing so without chemicals or poisons is especially great. But using animals for “biosurveillance” also raises some questions, starting with, what are the implications of continually robbing wasps of their prey? According to the WaspWatchers website, “Typically a robbed wasp will return to its nest 13 minutes later, usually without prey, hesitantly approaching before entering the burrow to spend about 13 minutes inspecting the nest before departing on another foray. Selective prey removal can be repeated time and time again without significantly altering the wasp’s provisioning behaviour.”

I realize I’m probably in a minority for wondering about how this program works from the wasp-end of things. If any Wasp Watchers out there want to share their experiences volunteering for this program, we’d be glad to hear them.

Thanks, Jim, for the heads-up!