Disagreement Over The Portland, OR Tree Plan 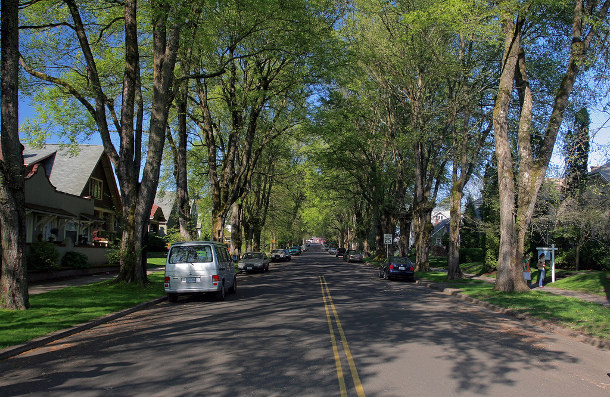 In early June, the Portland Oregonian published an editorial titled, “Portland’s Cadillac Tree Plan.” In it, the board suggested that Oregon’s urban trees are doing great just the way they are, and argued that the city’s new tree code is costly and ineffectual. (The code was adopted two years ago but has not been implemented due to budget, and is now set to take effect in 2015). A lot of the disagreement around the new code seems to come down to two basic issues:

1) the state of Portland’s existing tree canopy, and

2) how the new code affects tree care and removal on private property.

According to the Oregonian editorial, Portland increased its overall treed area by 2,400 acres between 2000 and 2010. This gets their canopy cover to nearly 30 percent – which, it’s true, is a pretty respectable number compared to other U.S. cities. It’s just three points shy of their goal of 33 percent trees cover by 2030. Nor do they seem impressed by what the new code will do to protect trees.

In a response to the editorial, Meryl Redisch, the chair of Portland’s Urban Forestry Commission, wrote her own op-ed in favor of the new code, calling it a “basic ‘safety net’ for trees rather than a ‘Cadillac plan.'” She writes:

The Oregonian’s June 3 editorial “Portland’s Cadillac tree code” proposes a very costly venture for Portland. It is costly in terms of government spending, disappointed residents and reduced future viability of our city. The editorial’s call for revising the city’s new tree code for the sake of “frugality and regulatory restraint” does not take into account the reasons for the code update, the investments already made in its creation and the new code’s laudable approach to safeguard our urban forest.

The comments to the editorial reflect conflicting views, but widely resist hiring any new staff, doing any centralized tree planting, or placing almost any restrictions or limitations on the rights of private property owners to deal with their trees however they wish:

Another commenter thinks Portland does need more trees, but questions the distribution of the plantings (“plant trees where they are needed” – a statement subject to many interpretations): 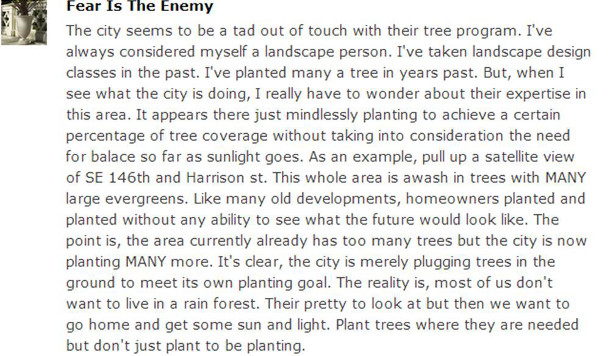 And, of course, there is plenty of disagreement about how well Portland’s existing trees are really doing: 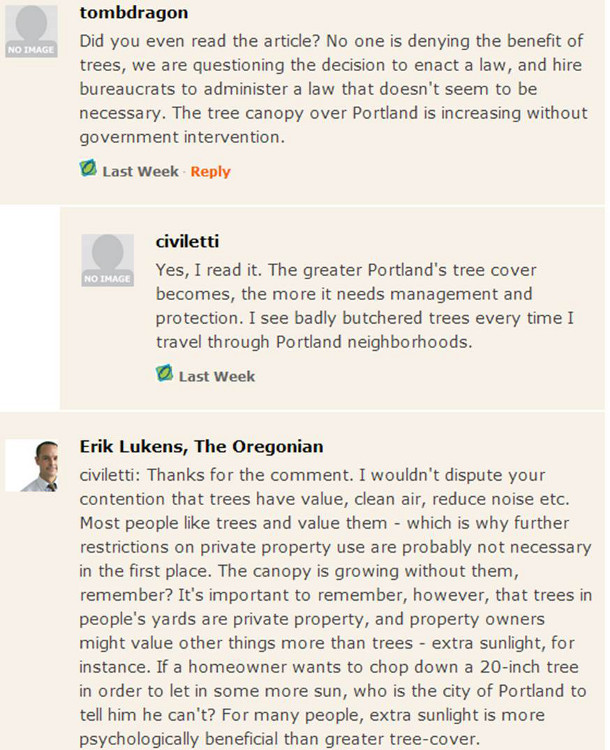 What the comments reflect more than anything is the fundamental tension about whether trees constitute a form of public infrastructure. That is a new concept for most people, so it isn’t surprising that private property owners are bothered by the idea that the city could legislate the trees on their lots. 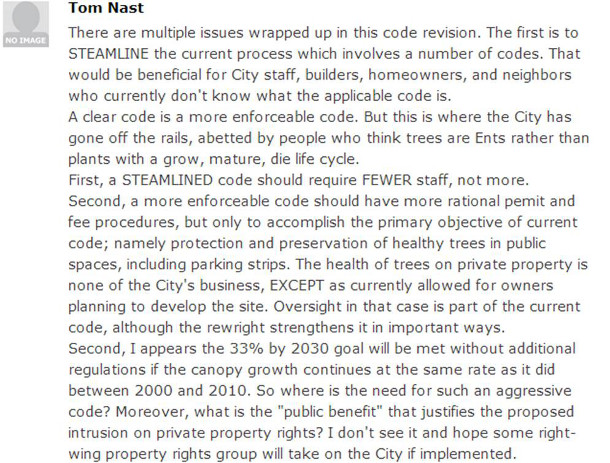 Of course, the difference between flowers and trees as far as public benefit goes is dramatic. Flowers – which are wonderful – don’t qualify as a form of green infrastructure, so having the city legislate them would be silly indeed. Trees, on the other hand, are. Most people don’t realize all the benefits they get from trees, because they tend to be diffuse and quiet: avoided costs energy, lower crime, higher property value, improved air and water. If you accept that they do function as a utility, much the way a street light or a sewer pipe does – then it becomes much harder to draw a clear line between the rights of the city government and the rights of the property owner.