Denver has long been a place of significance in the American West. Founded as a gold mining town in 1858, the city built a connection to the transcontinental railroad by 1870 and quickly established itself as a key supply hub and large commercial center serving cities both nearby and throughout the region. By the 1960s and 1970s, however, the city – like many others in the U.S. – was in a period of decline. People were gravitating to cars and planes rather than railroads for travel, and expanding suburbs drew residents away from the city center. To attract people back, Denver undertook a major revitalization effort, starting with the creation of the 16th Street Mall. 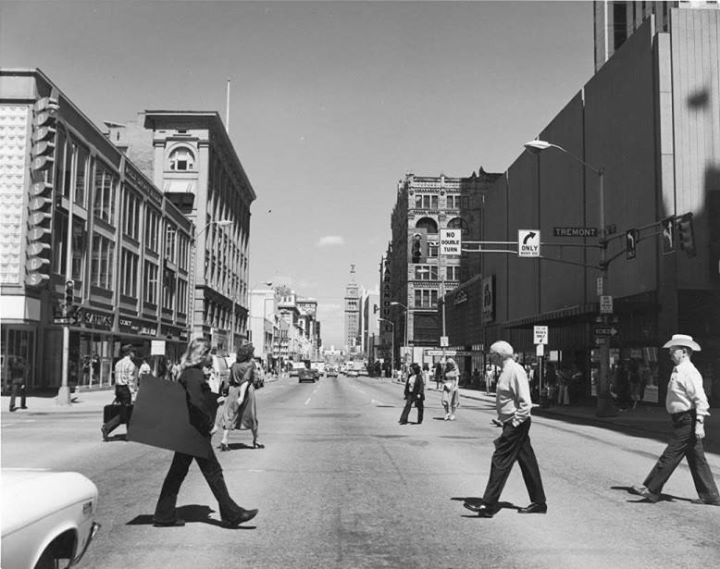 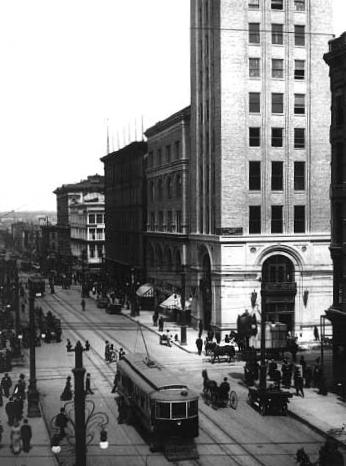 Previously, 16th Street was a lively but narrow one-way street with three lanes of traffic, 16-foot sidewalks, and retail. For the new design, the Regional Transportation District (metro Denver’s public transit agency) hired renowned architecture firm I.M. Pei and Partners (now Pei Cobb Freed & Partners) with Hanna/Olin (now OLIN) as the landscape architects. The project, which spanned nearly a full mile, put people and transit at the center of the design while, according to the Pei Cobb Freed & Partners project write-up, “consolidating and revitalizing the diverse city core.” The new design created an inviting, pedestrian-friendly area that is 80 feet wide, with three main “zones of activity”: 19-foot-wide sidewalks on each side, bordered by 10-foot-wide bus paths, with a 22-foot wide central pedestrian promenade. One of the mall’s most arresting features is its distinctive granite pavers, which are multicolored in shades of gray and red, and arranged out to mimic the pattern on the Western Diamondback rattlesnake.

A less well-known element of the project, but no less significant to our minds, is the design of the planting beds for the trees, which are in one of the earlier suspended pavement systems that we are aware of. Like many suspended pavement projects, at street level the tree openings on the 16th Street Mall look ordinary: small, round openings punctuated by 220 oak and honey locust trees. But rather than traditional tree openings, which have limited soil for root expansion, the designers created a larger custom concrete vault system to create a larger dedicated rooting area while still protecting surrounding infrastructure. Construction on the project began in 1980 and was completed two years later, opening to the public on October 4th, 1982, a beautiful fall day, to a crowd of 200,000. 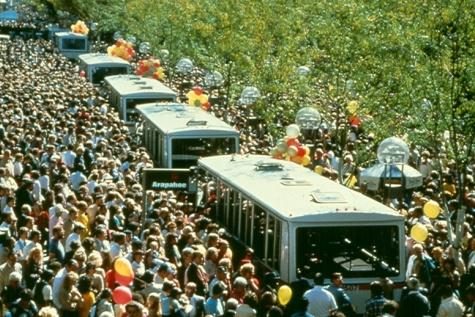 According to a 1983 article about the project published in AIA Journal, the trees were considered a central feature of the Mall, and great pains were taken to obtain high quality stock.  The trees were planted in parallel rows all the way from Broadway to Market. The promenade, also known as the median, runs from Arapahoe to Tremont, and it is these trees – honeylocuts – that were planted in custom concrete suspended pavement planters. Each planter has cutouts on three sides, to provide channels for further root expansion. The article explains, “Since the trees sit so close to the transit vehicle line, one corner is solid concrete to withstand the weight of the transit vehicles. The box is topped with a precast concrete lid with six-inch air and water holes and above that granite paving with one-inch holes. The only visible portion of the planting system is a cast iron ring that can be widened as the tree grows.” 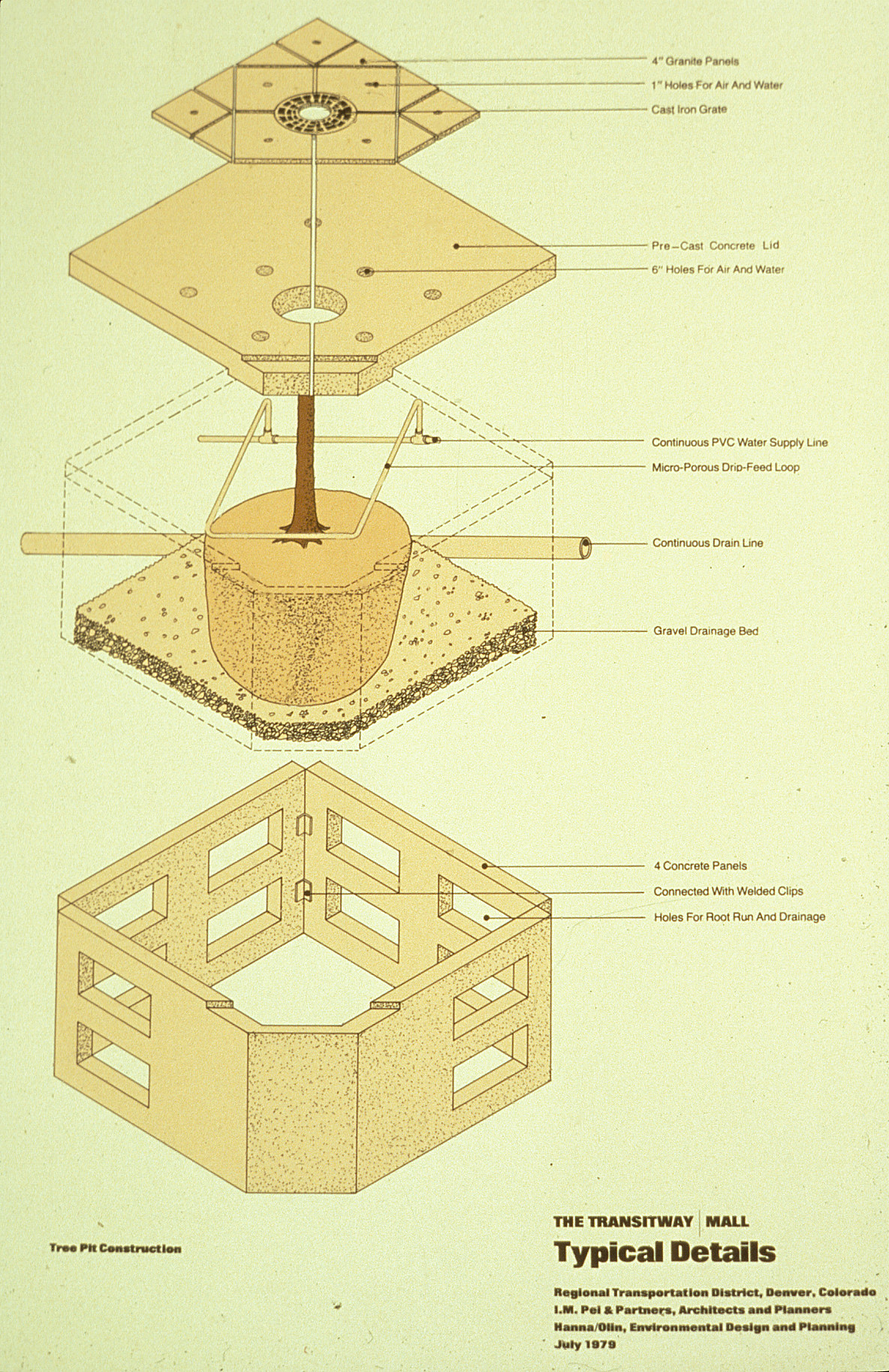 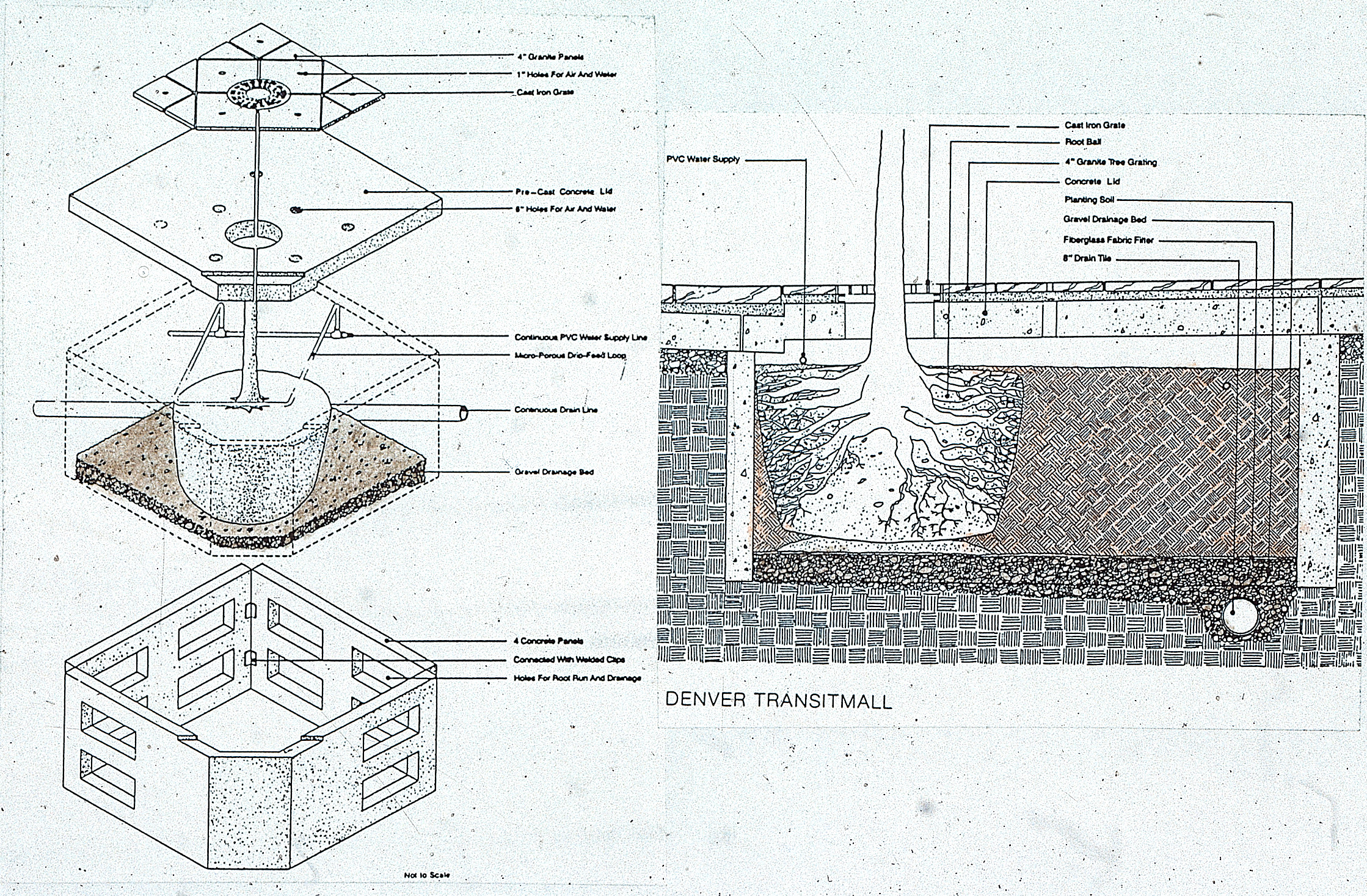 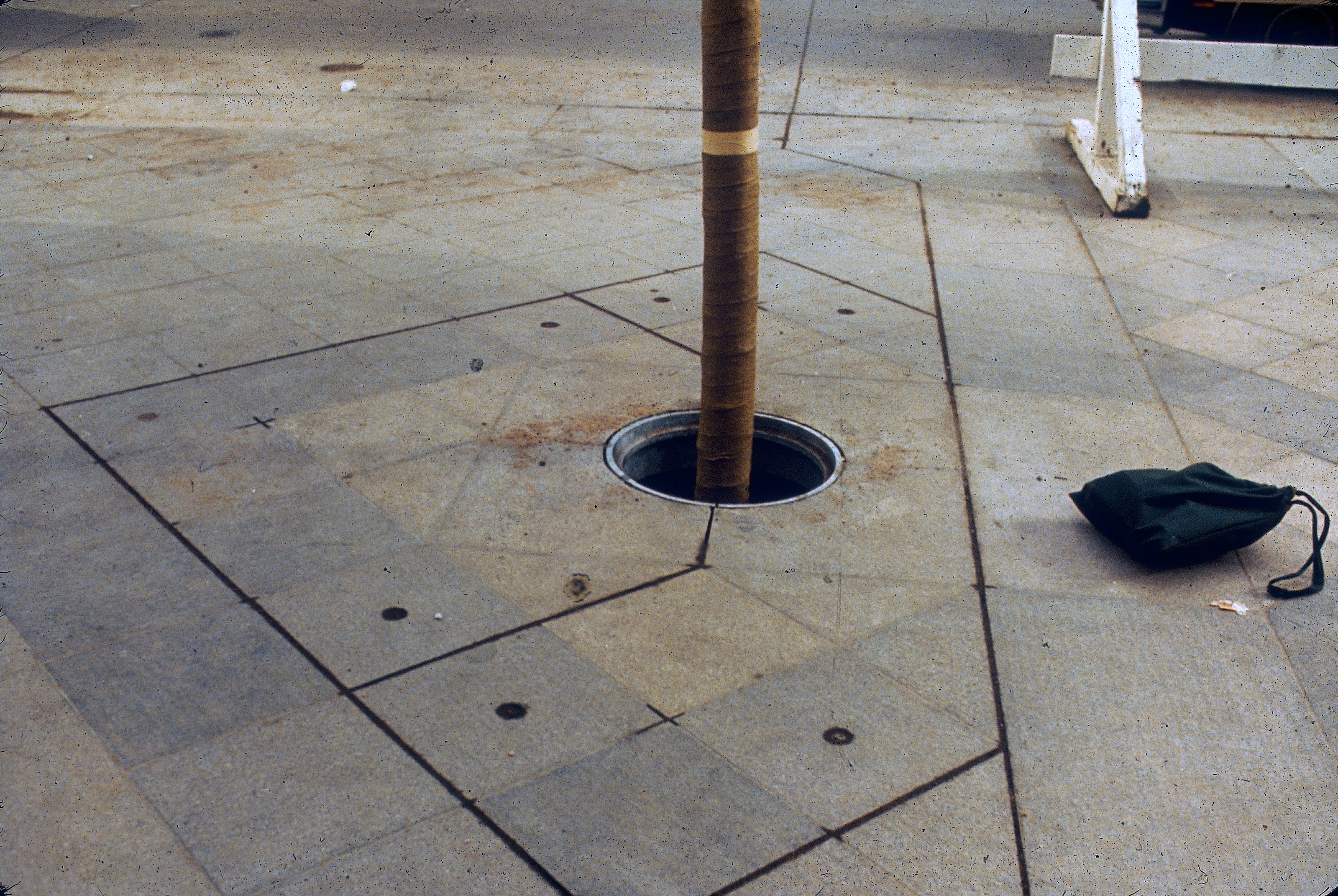 The planters are square with one edge sliced off, as pictured here. Photo credit: Tom Perry 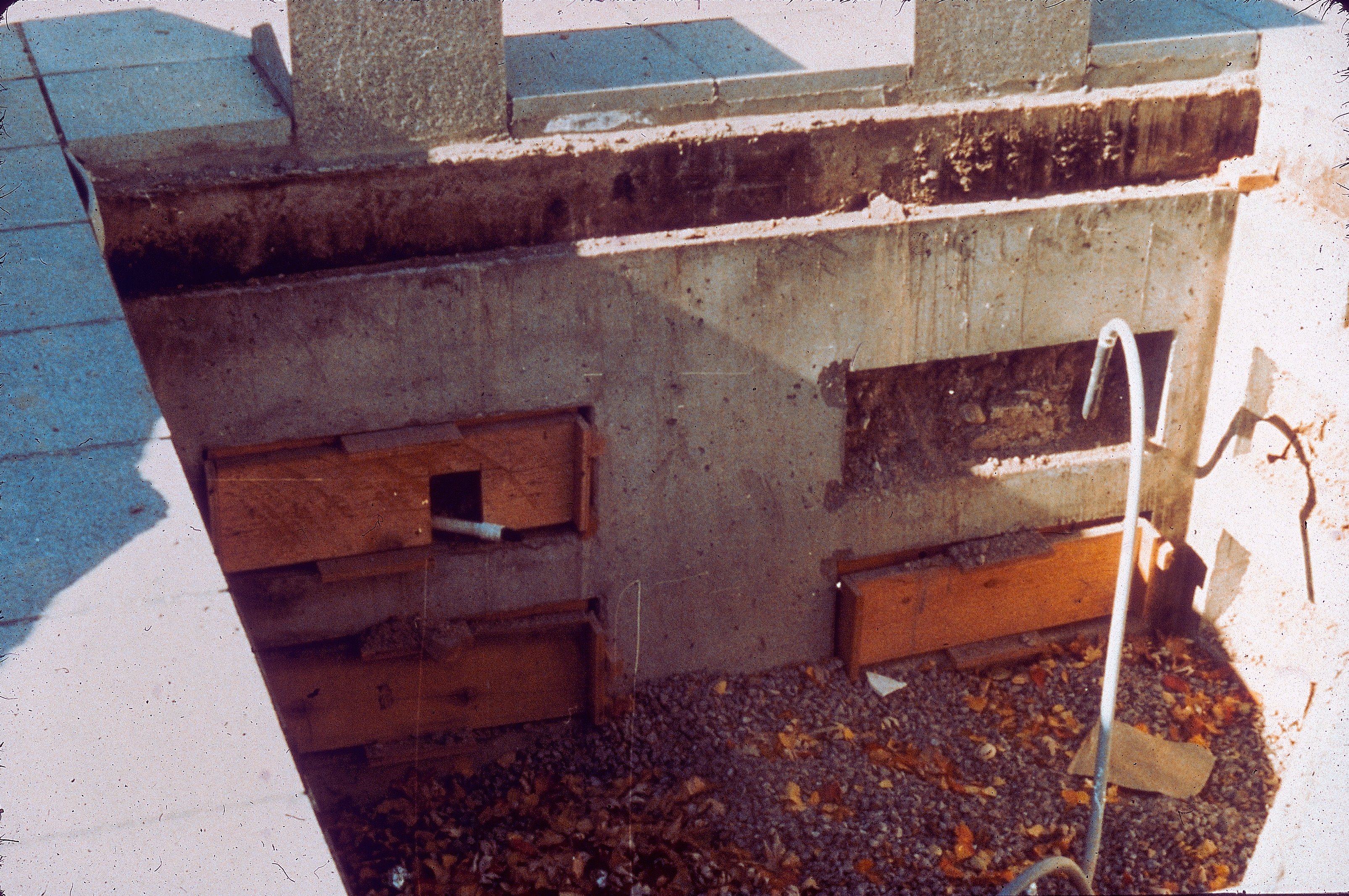 The planters had a custom watering system and opening to allow tree roots to break out into the surrounding soils. Photo credit: Tom Perry

According to Charlie Hunt, Downtown Service Coordinator with the Downtown Denver Partnership, the planters are about 5 ½ feet deep from sidewalk grade – the top 18” are composed of a 12” granite/concrete lid and a 6” air space. Below that is 2 ½ feet of amended soil and at the bottom is 6” of drain base gravel. All in all that works out to around 160 cubic feet of soil in each planter. While this is not an impressive amount of soil based on our current understanding of how much soil trees need to thrive and grow to maturity, it was significantly more than they would have received in a traditional opening. 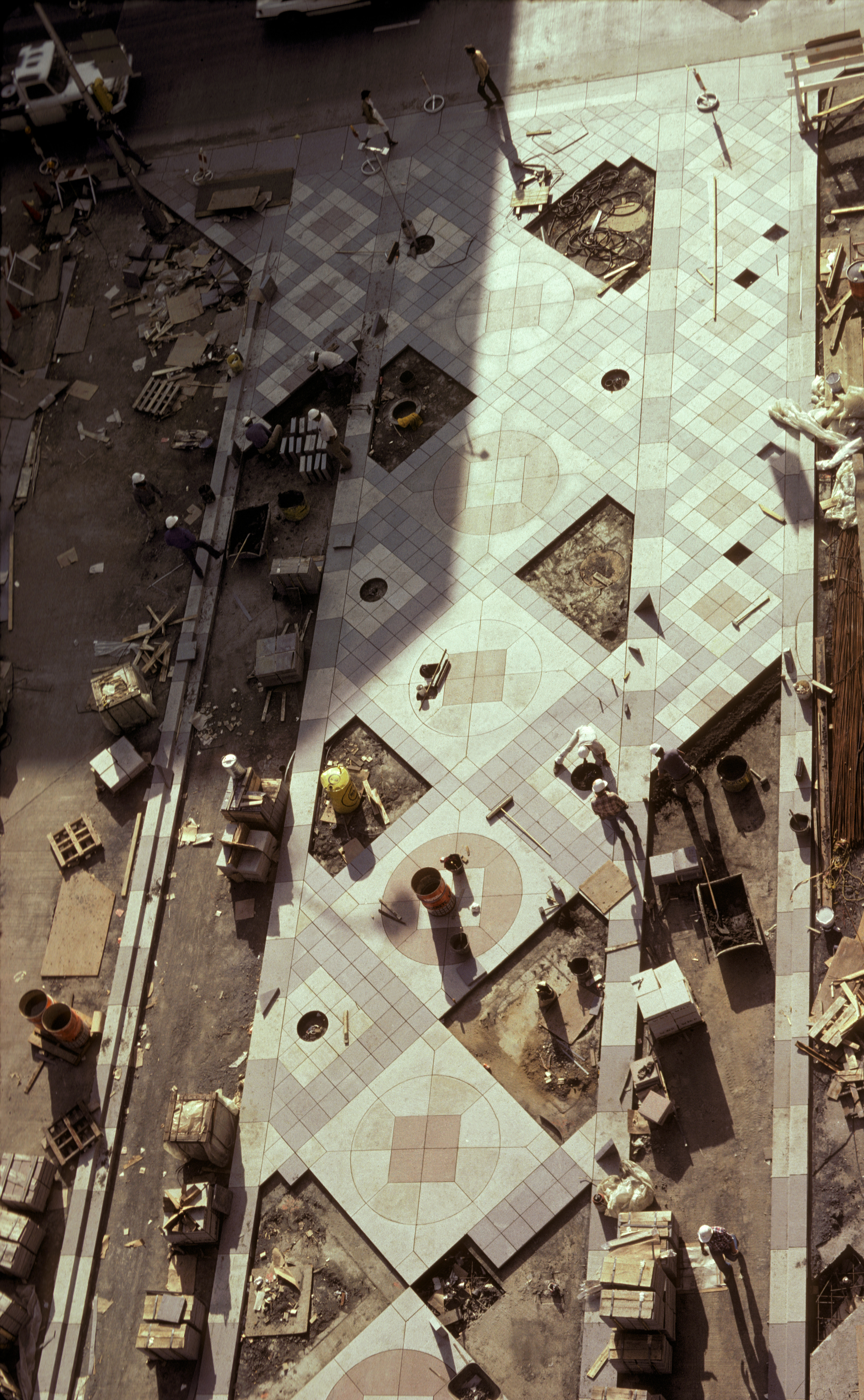 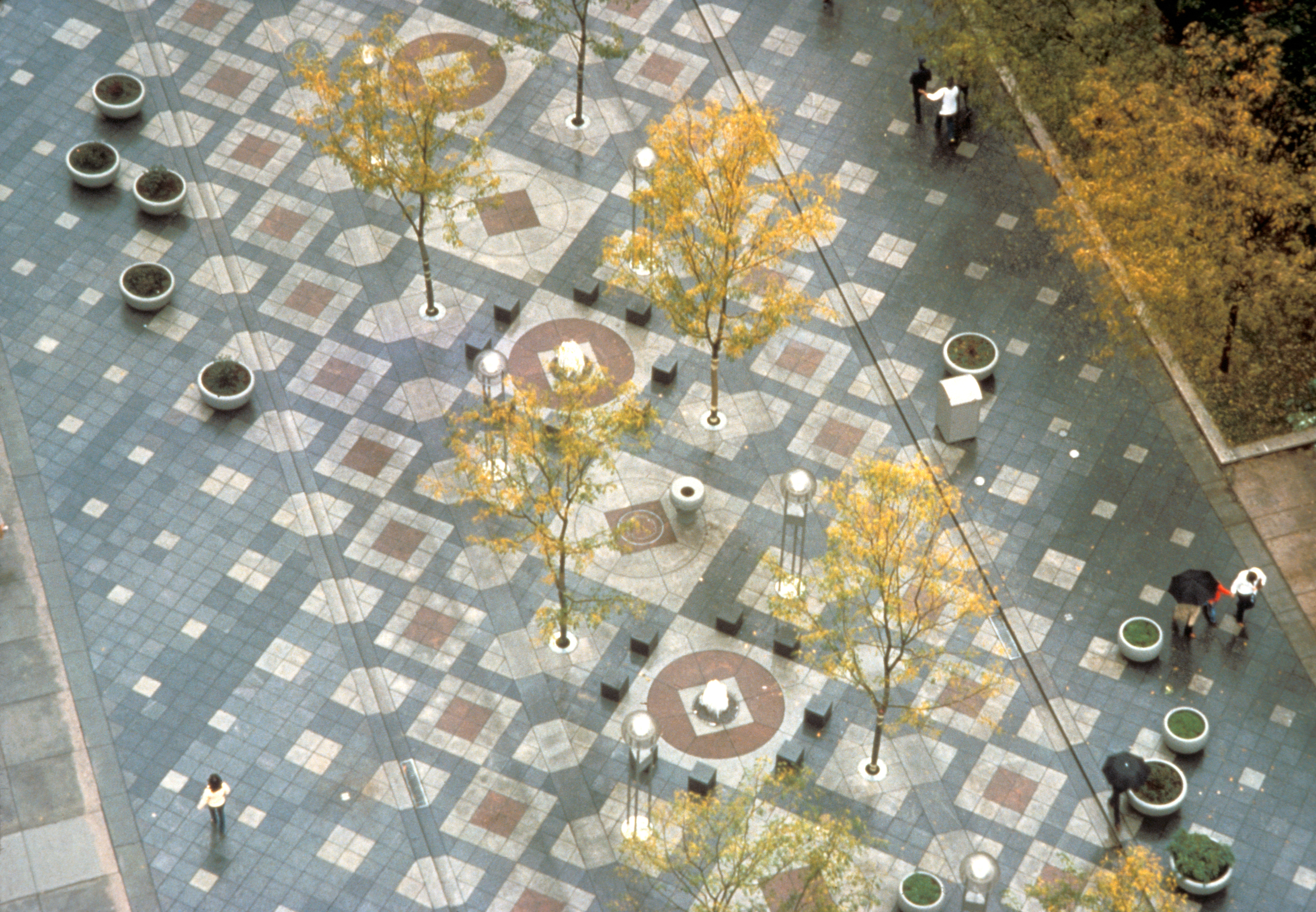 The trees are planted between 22 feet and 32 feet on center and, because of the custom planters and the intricate paving pattern of the transit way, were a challenge to place. According to Nora Richter Greer, author of the 1983 AIA Journal article, “To match the precise geometry of the paving pattern, the trees had to be placed exactly as designed; there was no variance for the construction workers. Laurie Olin of Hanna/Olin says, ‘We had a fair amount of trouble getting the boxes set right, laying first pieces of concrete out when there is nothing else around except construction equipment. The final placement was a matter of eighths of an inch.’ Finally, a special rig was invented to plant the trees vertically into the pit.” Each tree was topped by granite pavers and a cast iron tree grate composed of segments that were designed to be removed to create a wider opening as the trees grew and expanded. 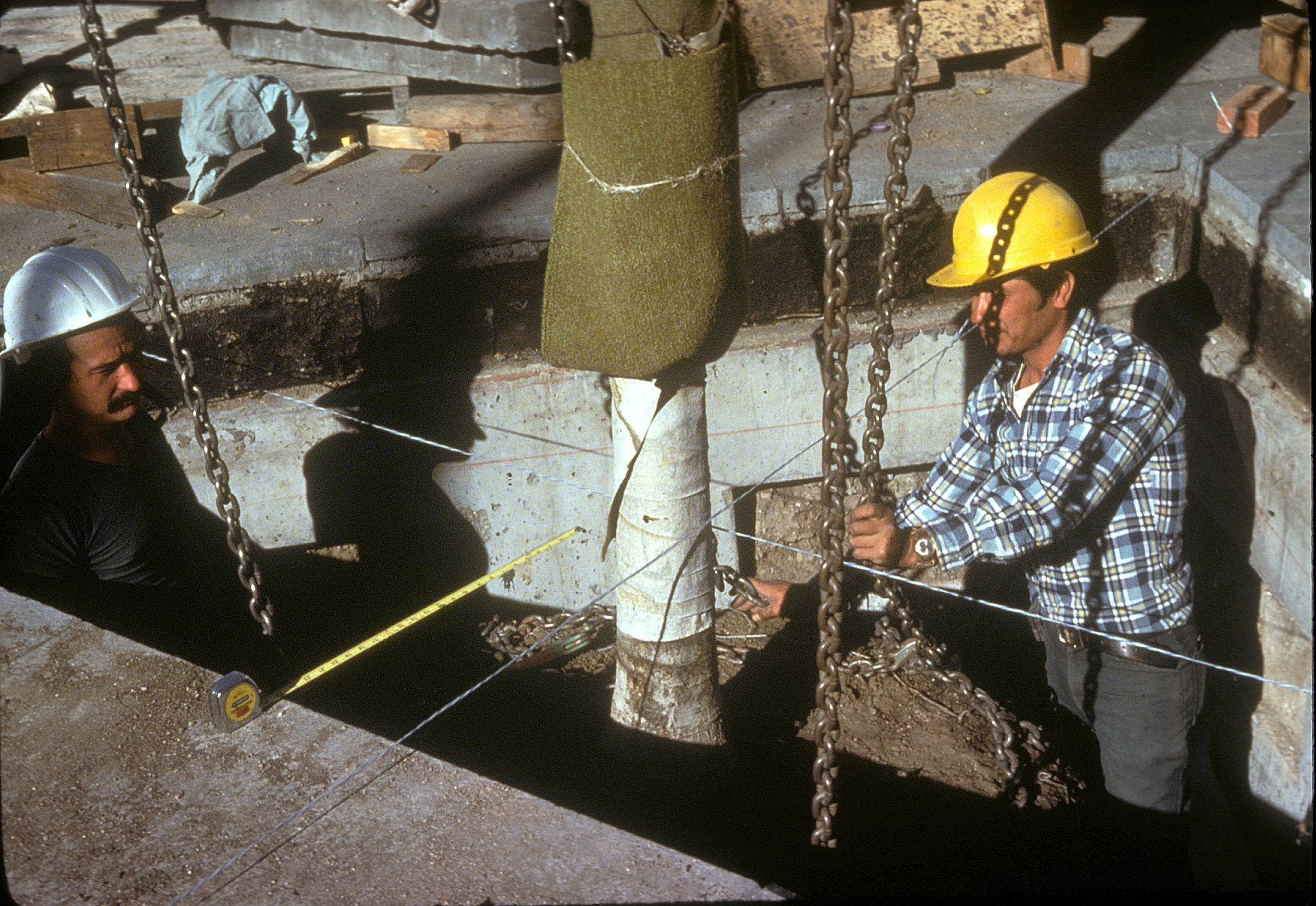 A custom system was also devised for watering the trees. A continuous underground pipe was used as an anchor for two microporous plastic pipes to loop around each root ball. Watering was manually adjusted based on the needs of the tree, and a drain pipe runs underneath each tree, nestled in a bed of gravel. Incredibly, the irrigation system is still operational, and every other block has a water tap that feeds two adjacent blocks. Timers were added about five years ago, and the Downtown Denver Business Improvement District (BID) monitors and maintains the system all year long. The system is 35 years old, and the rate of water usage block to block can vary. The city and the BID are looking forward to eventually replacing it and implementing a better monitoring system. An arborist checks all the trees on the mall every month, which is covered by the BID’s budget of about $50,000/year for maintenance of trees on 16th Street Mall.

John Desmond, Executive Director of the Business Improvement District, told me “I was working in downtown Denver at the time, and the change was absolutely stunning. The 16th Street Mall was a big visionary project that was a huge risk – a lot of pedestrian malls seemed like great ideas but didn’t succeed. To take a street in a very car-oriented city and make it about pedestrians and mass transit was a big move – and to spend $76 million and two years of construction time made it even riskier. But it paid off. The mall continues to be a huge destination for visitors and retail draw, providing huge income to the city annually. It’s made a profound impact from an economic, transit, and tourist point of view. A lot of that has to do with the design and a lot has to do with the trees. This is one of the few places you have a continuous design of mature trees in downtown. I think it makes downtown Denver a much nicer place.”

In 1992, ten years after it was initially completed, a second phase was initiated to extend the Mall from Blake Street to Denver Union Station. This phase was designed by ZGF – Portland and used structural soil, rather than custom suspended pavement, for the trees. All in all, the completed Mall – which was funded by the Urban Mass Transportation Administration and the Regional Transportation District – is 1.25 miles (2 km) long. It is loved not just for the experience it creates for visitors, but also because it is now the last of the city’s prominent Modern designs (the mall originally connected Zeckendorf Plaza and Skyline Park – the former no longer exists and the latter remains, but was substantially redesigned in 2003). 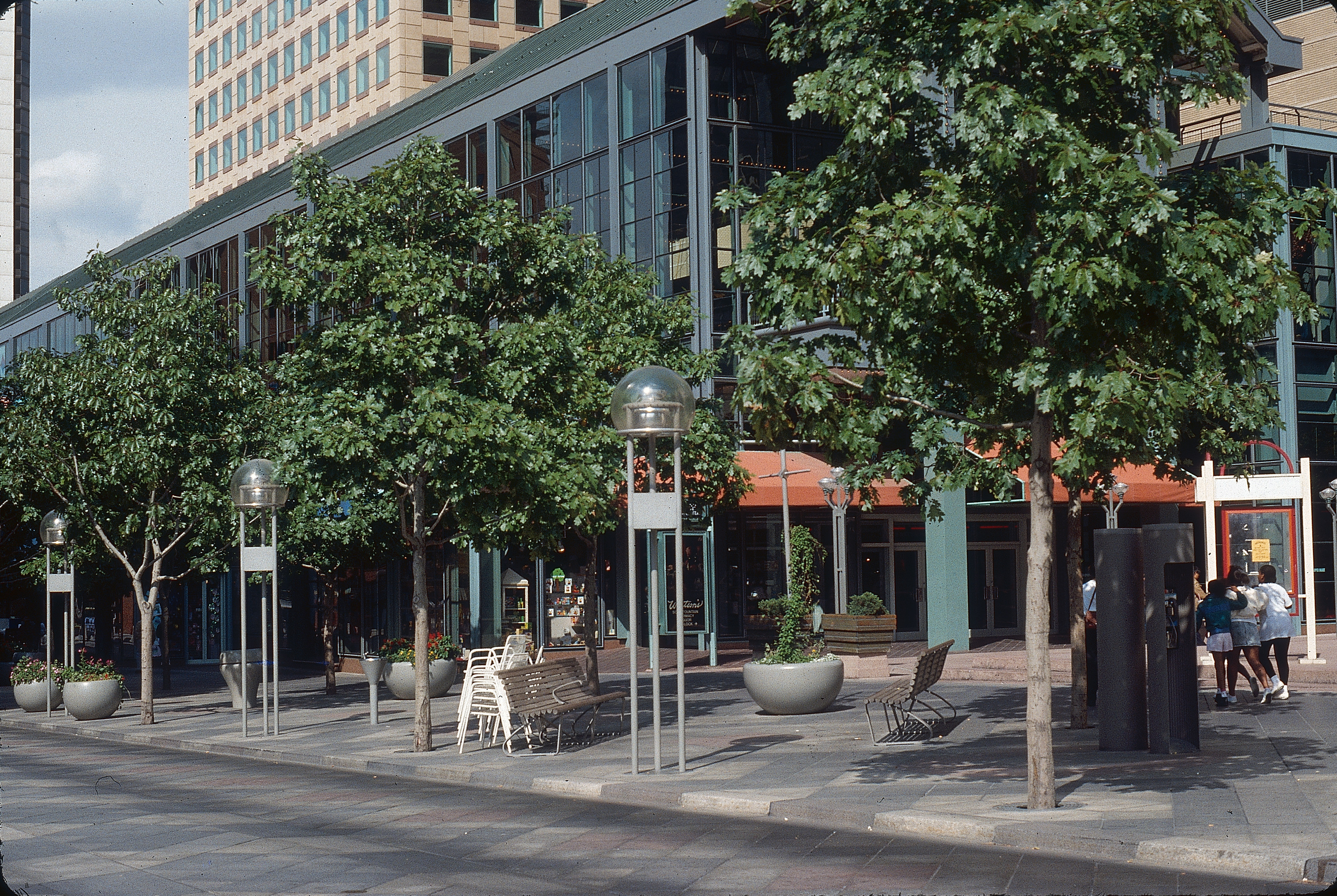 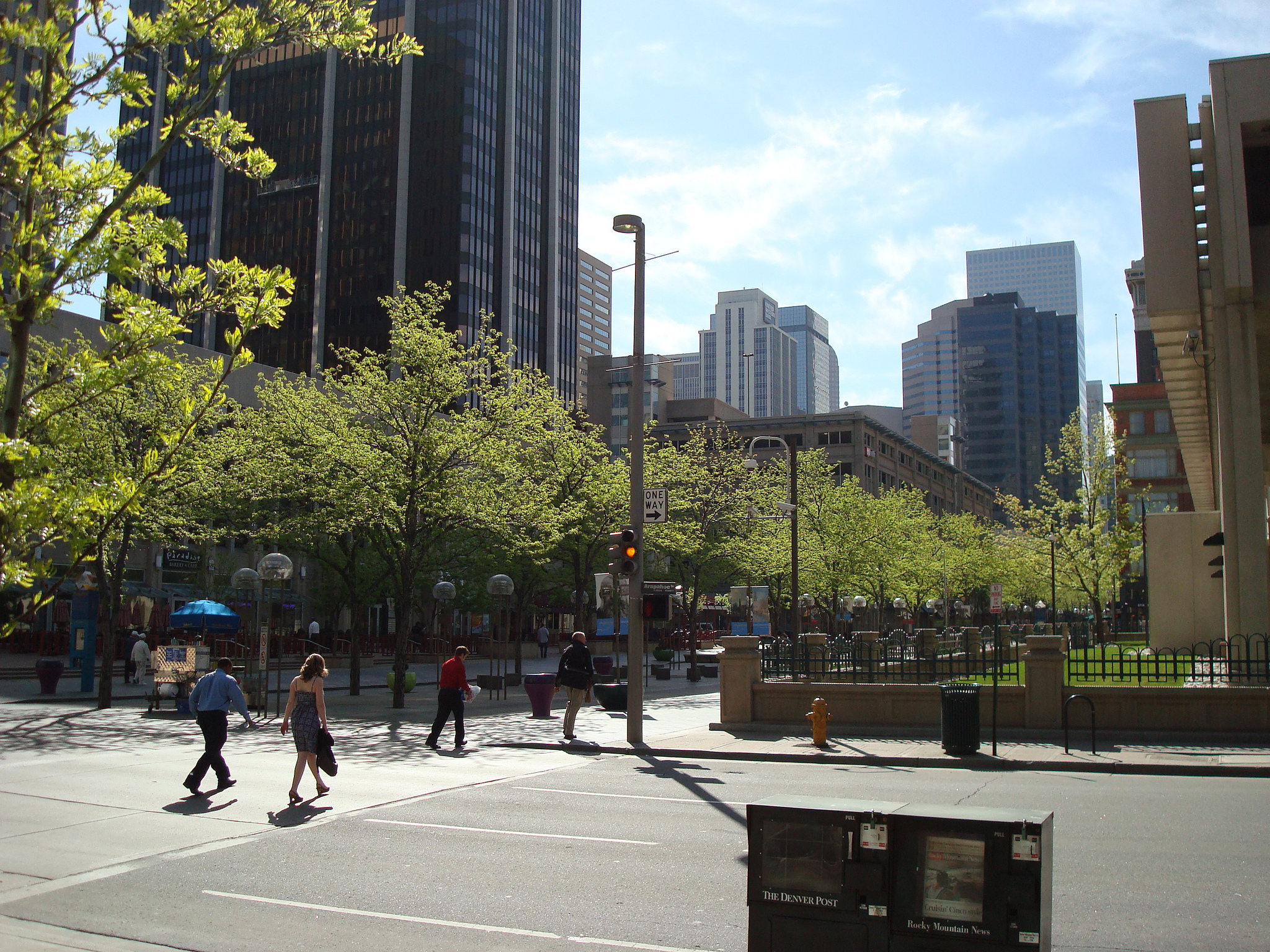 You have only to walk Denver’s streets to see that trees in larger planting beds are outperforming those in small, traditional openings. In 2011, after years of seeing their trees die prematurely, Denver implemented a citywide soil volume minimum for street trees. The city’s Street Tree Plan Review Checklist encourages designers and developers to provide 750 cubic feet of soil per tree and states that 5 x 5 pit areas shall no longer be accepted. Trenches, root paths, break out zones, structural cells, or other un-compacted soil technology is recommended to meet the minimum volume requirements. They have also eliminated the standard tree grate requirement. The Forestry Department has worked closely with public works and local business and developers to encourage people to recognize all the value they bring. They see that a healthy tree canopy draws people to particular streets and helps continue to make Denver a vibrant and enduring destination. 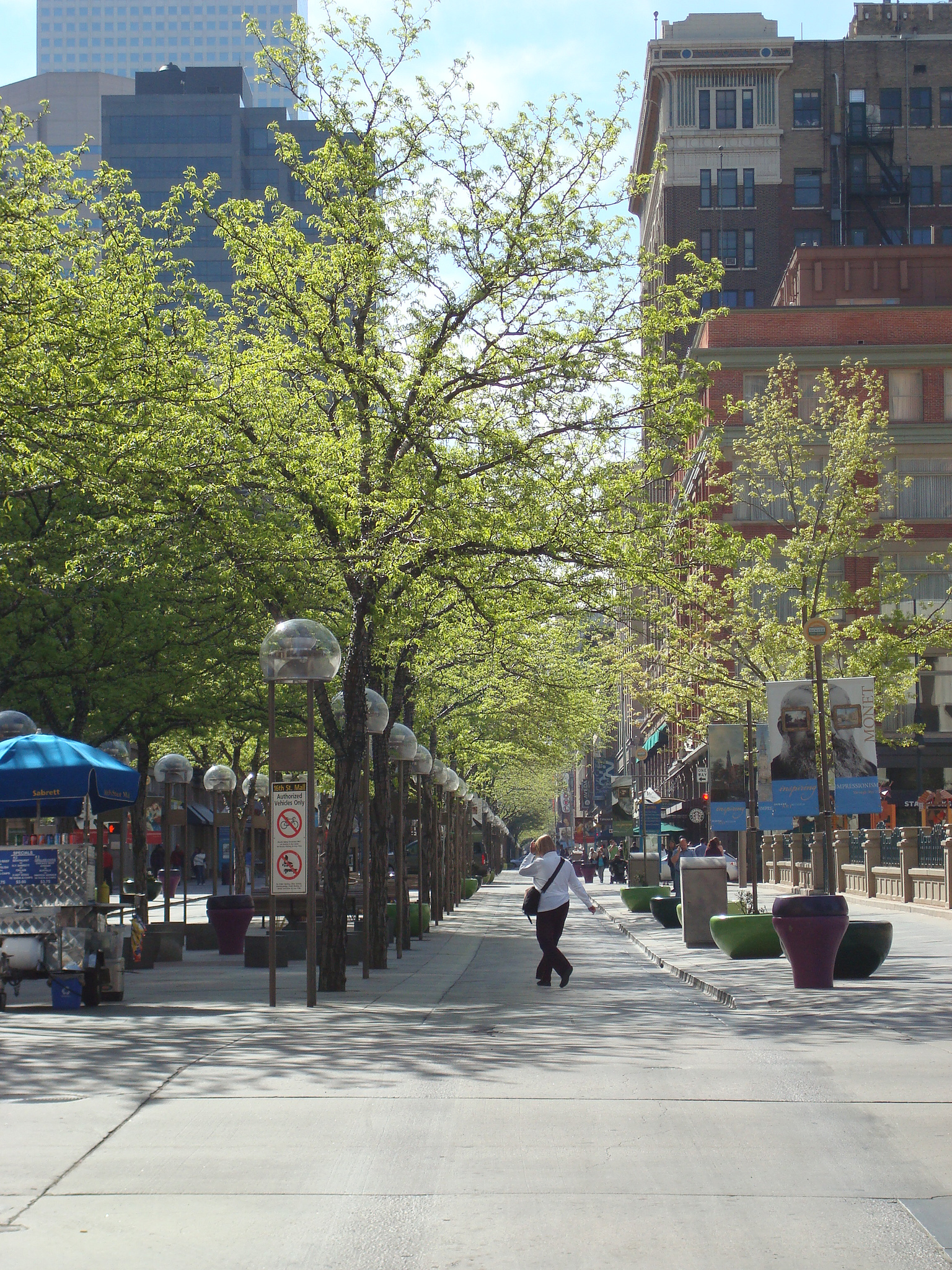 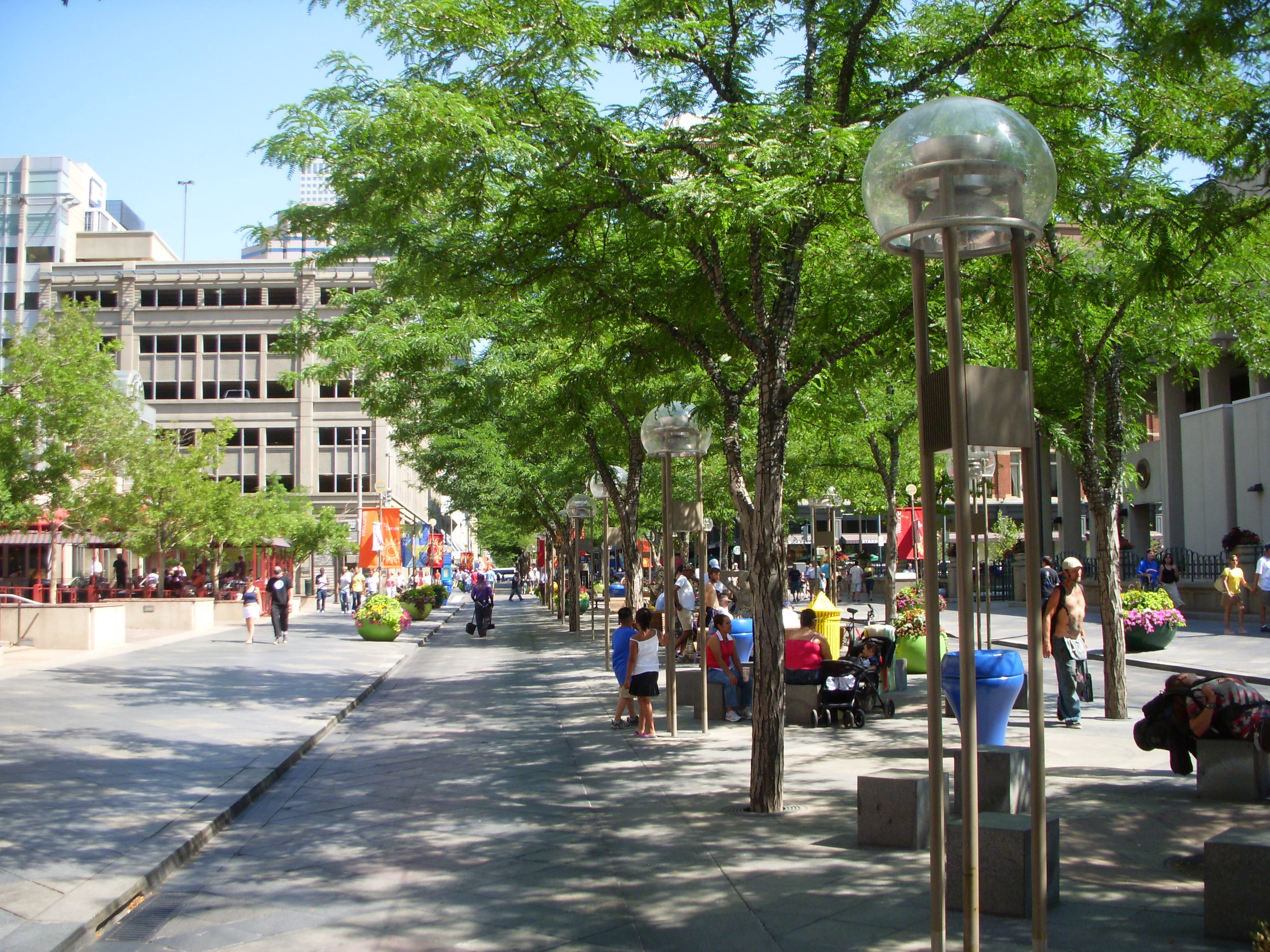 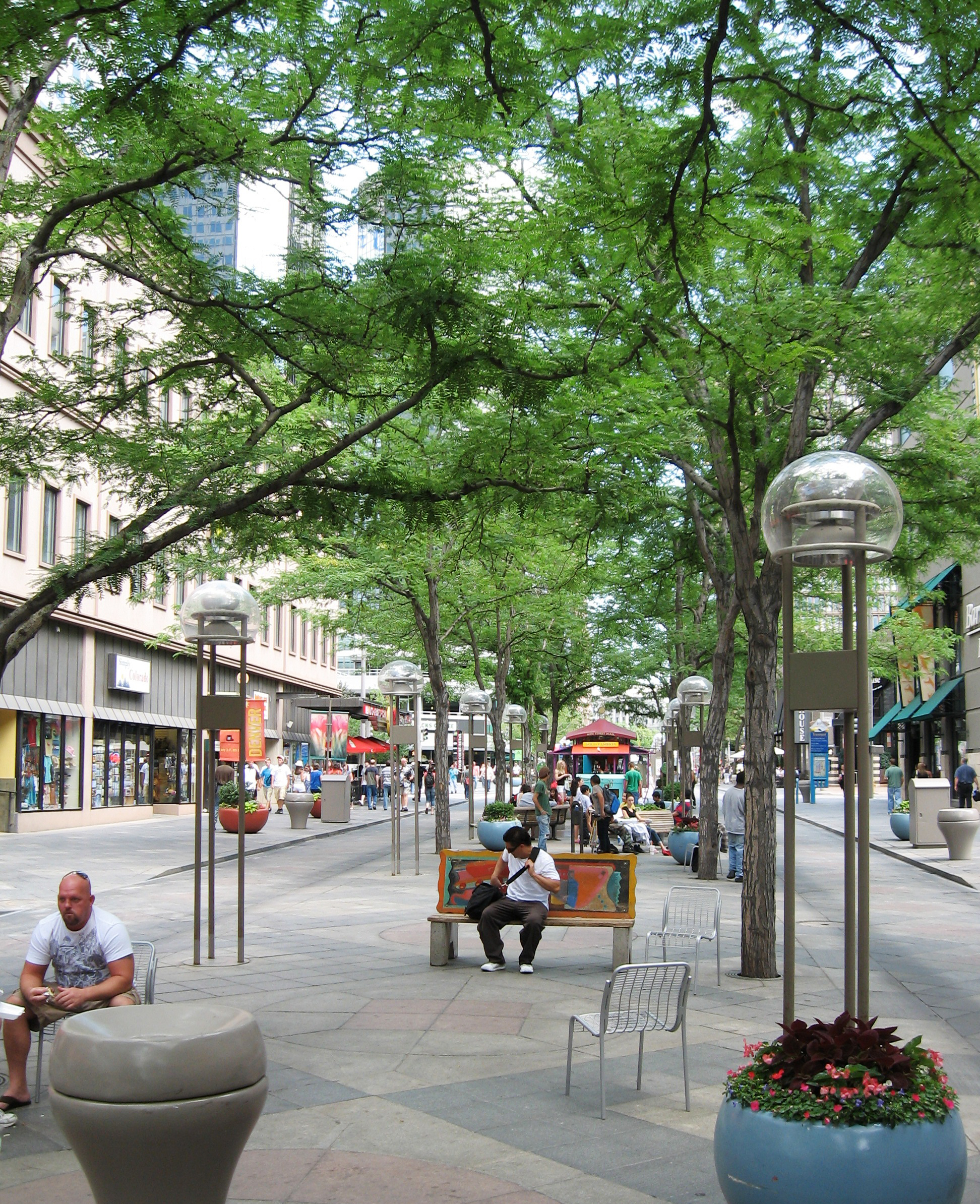