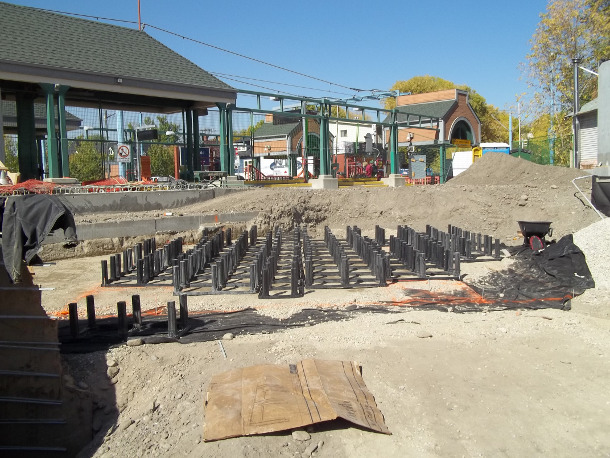 The design of urban hardscape installations is challenging at the best of times in that it must address a host of concerns related to surrounding land uses or facilities, different and adjoining pavement structures, new and existing buried utilities, stormwater management, and other systems or amenities that support the health and wellbeing of plants and people. Often, these designs are to fit and be constructed within tight spatial boundaries and must withstand punishing environmental and structural loads while at the same time providing a sustaining and sustainable home for urban trees.

Trees form an important part of a city’s “natural capital” in that they provide a range of what are often referred to as ecosystem services. These are net benefits to society that are, typically, not captured under normal accounting practices; things like improved air and water quality, storm water management, the dissipation of street-level wind energy and other forms of climate modification that benefit the health, safety, and comfort of people in urban environments. 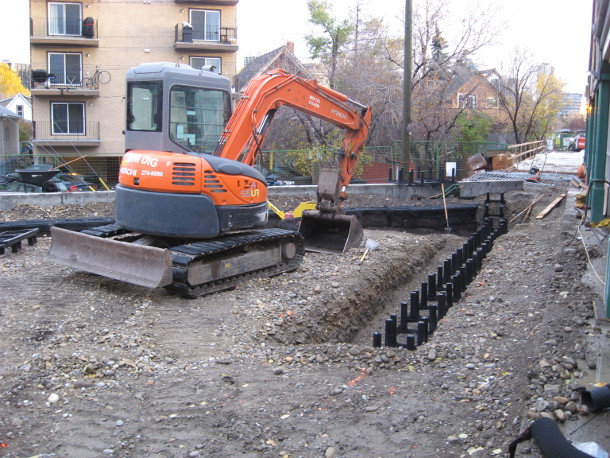 The small park adjacent to the outbound platform of the Sunnyside Light Rail Train (LRT) station in Calgary was a dark side pocket of leftover green space; one that related poorly to the LRT station in terms of function and circulation, as well as safe use by the surrounding residential community due to the inappropriate uses that its shape and landscaping often obscured from passive surveillance. In addition, the LRT system was being outfitted to handle four-car trains. Not only are longer platforms needed to accommodate the increased length of these trains, but also greater electrical capacity (traction power) to propel them. At Sunnyside, after successfully engaging the local community in a number of design workshops, it was determined that the best place for a new traction power substation would be within the same park. However, as this work progressed, the list of functional demands being placed on the park continued to grow.

What began as an awkwardly-shaped urban remnant was now being transformed into an important knuckle or functional node within the community. Not only would it support critical urban infrastructure, it would buffer and bridge between the residential community of Sunnyside and the nearby commercial districts of Louise Crossing and Kensington. It would also add a link to the Bow-to-Bluff enchainment of parks, south to the Bow River and north to the nearby valley escarpment, and become an elevated urban edge to the back yards of residences immediately adjacent to the LRT station. These changes would be accomplished, in large measure, by raising the original and largely unpaved ‘floor’ of the park to the same level as the outbound platform deck of the adjoining LRT station and by replacing the original dense perimeter of Colorado Spruce with a new bosque or gallery of six regularly spaced Brandon Elms. 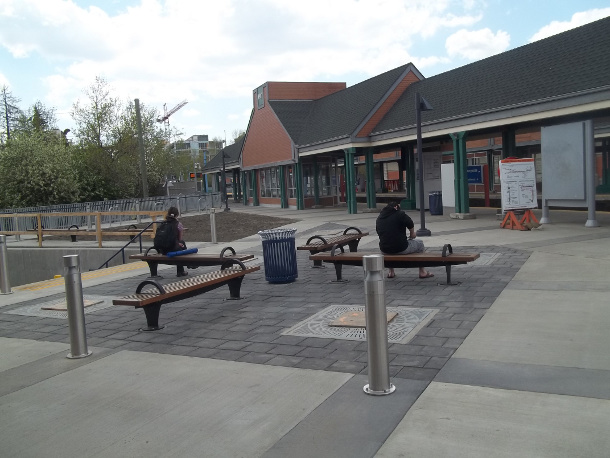 To aid pedestrian circulation and maintenance, large areas of the new park deck needed to be paved while still accommodating new trees, shrubs and turf grass. As a result, it became necessary to devise a way to balance the need for adequate soil and root space for trees below ground with the need to achieve the largest possible area of usable paved space above. To reduce the demand for potable water used for irrigation while at the same time maintaining the original storm water footprint of the site, grading, soil volumes, and root space would also need to be put to use as part of the site’s storm water management strategy. In other words, a net-zero impact on adjacent sites and storm water utilities had to be achieved along with pre-construction levels of plant irrigation and local groundwater recharge by capturing and retaining storm water in the added soil below the new deck or park floor. 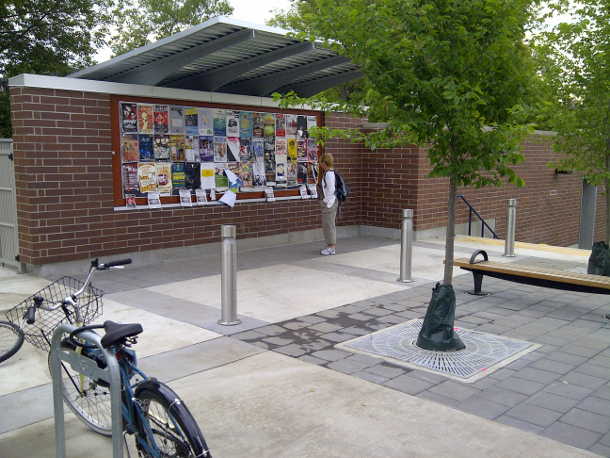 Helping to set and maintain this higher datum with Silva Cells was seen as a way to meet the structural requirements of new paving and pedestrian amenities set on it, to manage storm water issues on and below it, and to provide optimal growing conditions for the trees planted within this newly formed hardscape. Silva Cells were used to support the unitized and cast-in-place paving systems that formed the new deck above, and enclosed and contained the park’s “day-lighted” turf grass areas, in addition to easing the installation of and coordination between any new and existing utilities located in or passing beneath the park. Modular and stackable, the system also accommodated changes in elevation (up to 1800 mm in some instances) between the top of the LRT platform edge and the outer, lowest extents of the park. In short, the Silva Cell system provided the right combination of physical attributes needed to address this small but spatially, structurally, and functionally complex design challenge.

This case study was written by Bob Stirling, an architect with GEC Architecture. It is reprinted with his permission. You can download it here.