The Atlanta BeltLine is a comprehensive revitalization and mobility project powered by local citizens, civic leaders, and private partnerships that is transforming the city of Atlanta through the additions of rail, trail, greenspace, housing, public art, and a dedication to sustainable growth. At the core of the Atlanta BeltLine project is the creation of a network of public parks, multi-use trails, and transit that are formed through the re-use of 22-miles of historic railroad corridors circling downtown and connecting 45 neighborhoods directly to one another. One of the most stunning results of this urban regeneration project is the Historic Fourth Ward Park, a new 17 acre greenspace with ambitious sustainability features including tree preservation and tree canopy maximization, drought-tolerant landscape design, and improved storm water management. 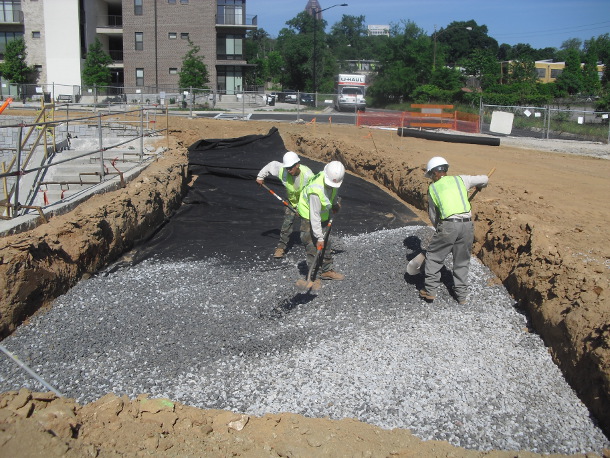 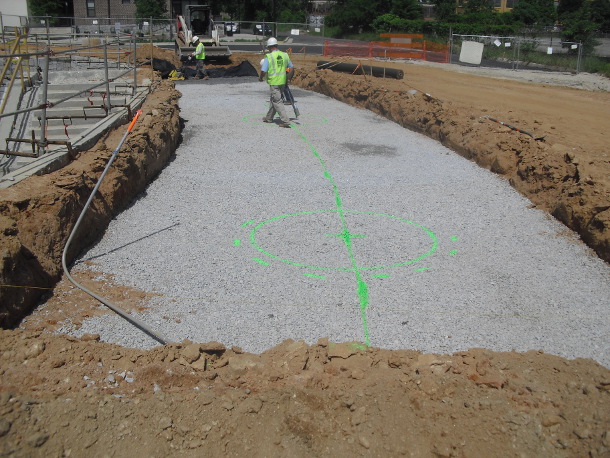 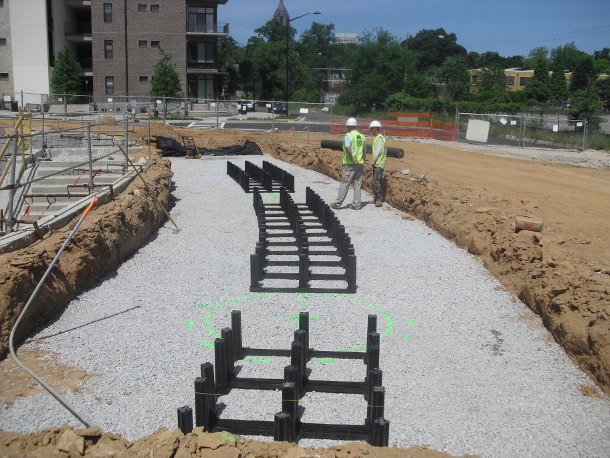 The site of the Historic Fourth Ward Park has a long history of excessive stormwater runoff and damaging flooding, and two new solutions were added to help keep water on site. The first is a new 2-acre lake that serves as a stormwater detention basin that increases the area’s sewer capacity as well as minimizes flooding and property damage. The second is a Silva Cell system that is providing ample soil volumes to park trees planted in paved, impermeable areas that would not otherwise have access to adequate amounts of soil.The design team’s proposal called for expansive paved areas to serve as gathering spaces for park visitors and special events. These impermeable areas include a plaza surrounding the lake that features sites for displaying artifacts from the rail corridor, as well as a paved trail to accompany the dry creek that flows into the lake. Because an increase in tree canopy and the preservation of existing trees is a key aspect of the Atlantic BeltLine’s approach, the park design included the planting of 36 new trees (16 Bald Cypress on the plaza and 20 Elms on the path of the dry creek). 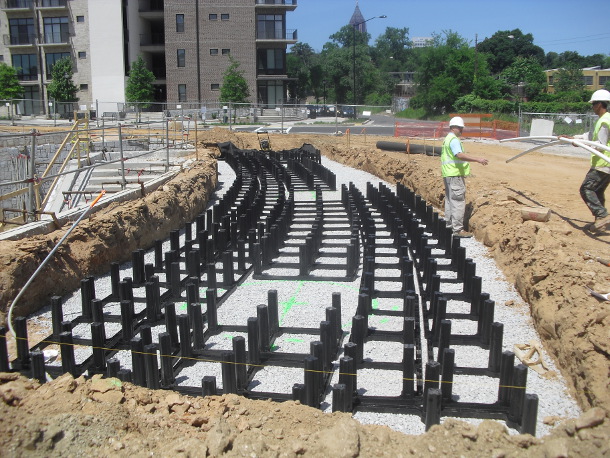 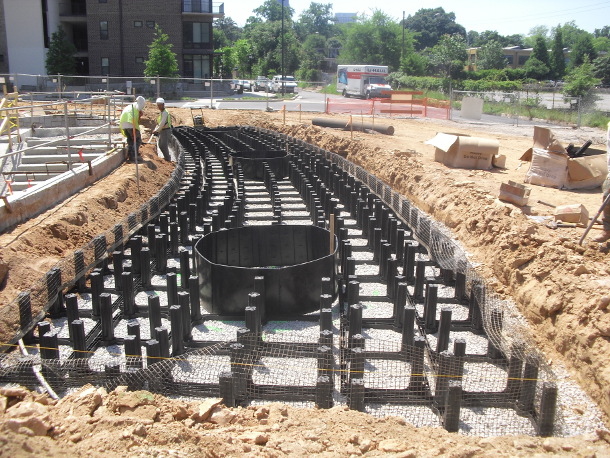 The designers wanted to ensure that the trees in the paved areas thrived to the same degree as the trees growing in the greenspaces elsewhere in the park and needed a modular system capable of adapting to the different shapes of the paved areas. Kevin Burke, landscape architect with the Atlanta BeltLine, proposed using the Silva Cells to bring the desired soil volume to the trees planted in the plaza, which had a traditional rectilinear design, as well as to the trees planted along the path, which has an curvilinear design that required a flexible system to accommodate its shape. 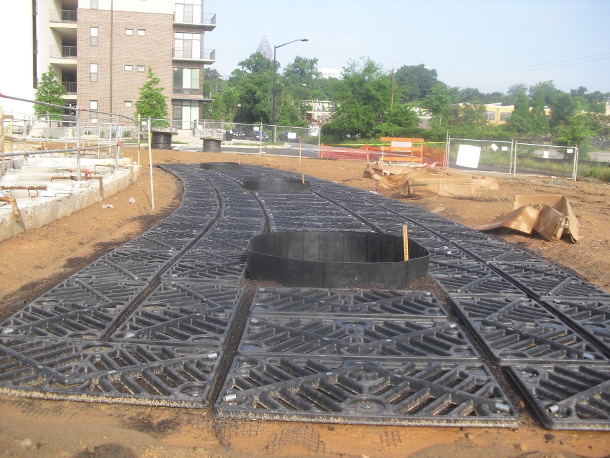 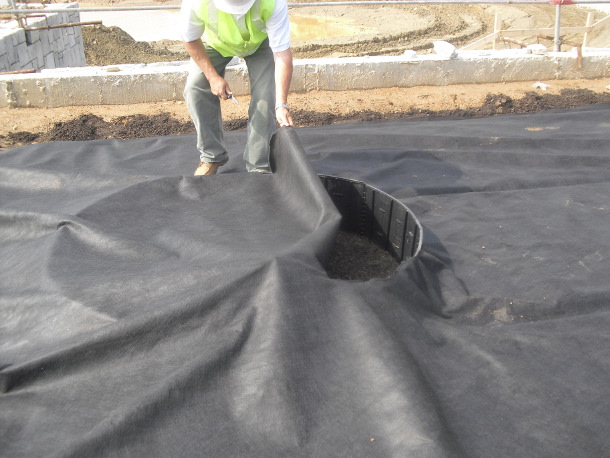 The design of the path area also presented an interesting challenge regarding the placement of a number of large boulders, intended to function interactively as places to sit and play, on top of and along the paths’ perimeter. Through consultation between the design and engineering team, the placement of the boulders was fine-tuned and limitations imposed that assured that the design goals were reached while preventing excess stress loading on the cells. 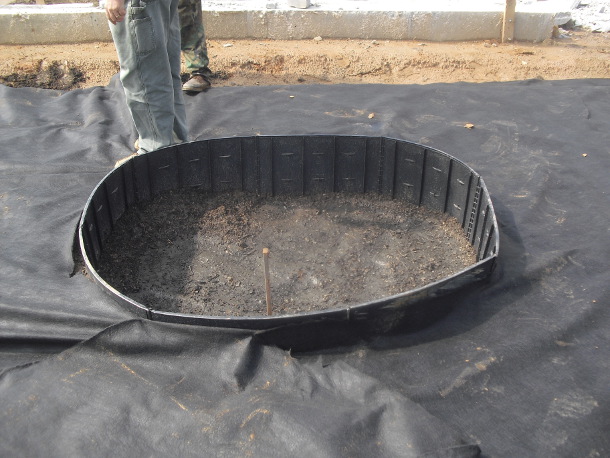 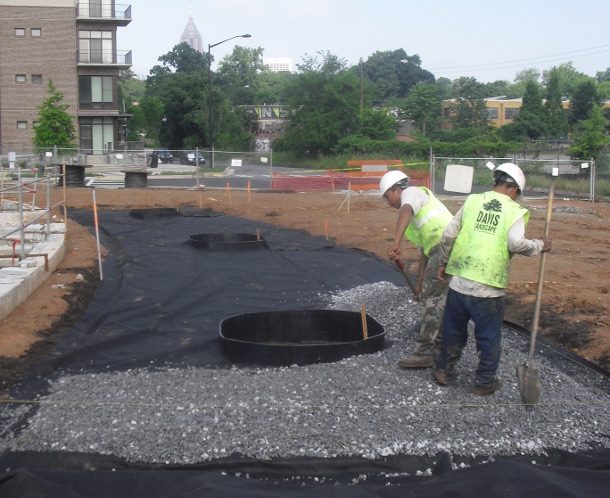 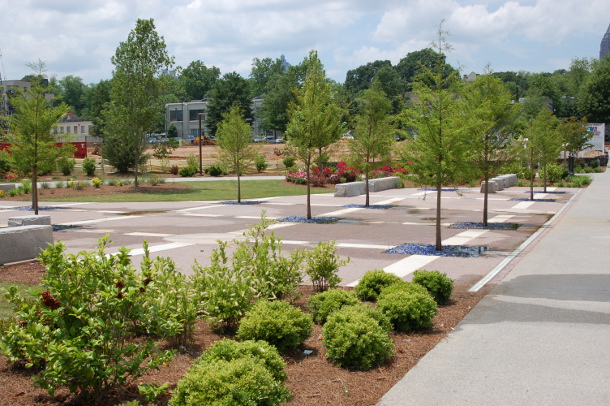 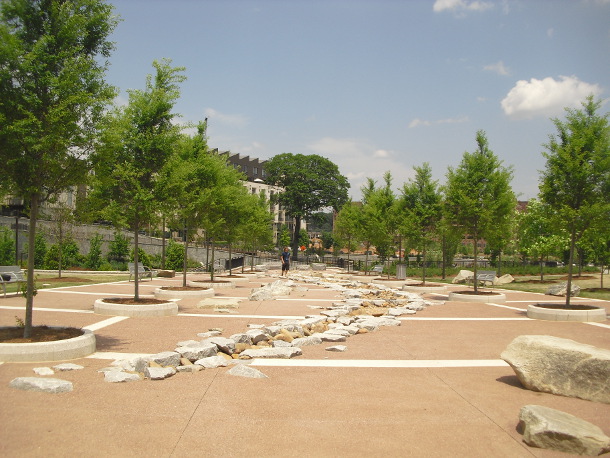 The construction teams installed 1,070 decks and 1,070 in a one layer system across the site, altogether bringing each tree over 400 cubic feet of soil. Thus the trees surrounded by pavement on the plaza and dry creek will be given equal opportunity to thrive as the trees in the open greenspaces, contributing substantially to the promising future of the pastoral oasis in the heart of Atlanta that is the Historic Fourth Ward Park.