The Oaks Trees at 17th St Market: An interview with TreeLab

When 22 Oak trees were introduced to their new home in Virginia, they likely received a bit of a shock. After traveling 530 miles from Georgia to be installed as part of the reimagined 17th St. Market, the Oaks needed a great deal of attention, care, and support, and that is just what they received. The Oaks were planted within the market plaza into Silva Cells, which gave their roots instant support. Each tree had 525 cubic feet of soil volume. TreeLab would monitor, manage, and support the Oaks for the next year to ensure the long-term success of the trees.

Aaron McFarland moved from Vermont to Virginia in 2017 to run the TreeLab program for the Enrichmond Foundation. Enrichmond’s executive director hired Aaron to start a nursery for the city and manage the brand-new program. In the spring of 2018, Aaron was tasked with taking care of the 22 Oaks at the long-awaited new market plaza.

To get a sense of the specific care and maintenance each tree received after planting, DeepRoot spoke with Aaron in this summer. 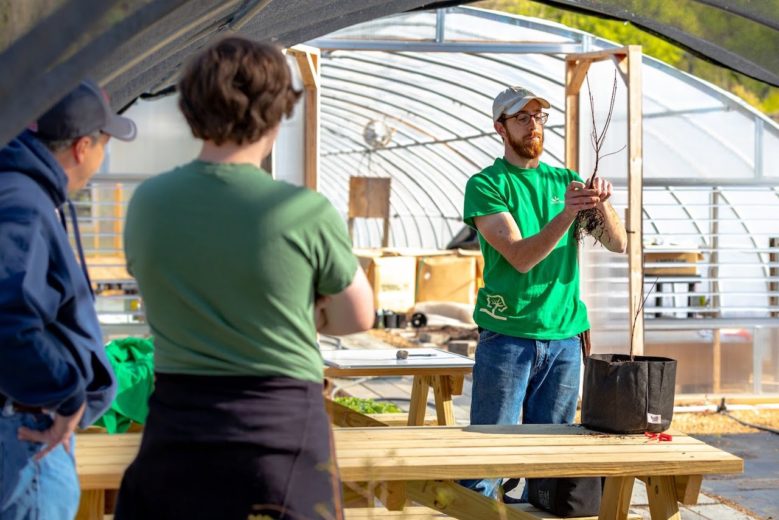 Aaron McFarland, TreeLab manager, tending to a tree in the greenhouse of TreeLab. Photo courtesy of Virginia Living.

DeepRoot (DR): Aaron, what did you do for the trees?
Aaron McFarland (AM): The guidelines from the nursery that provided the trees asked that I keep track of how much water was put on when it rained, take note of potential issues with dieback or insect infestation, and what we did to correct issues.

DR: You have been managing the Oaks for a year, since day one. Can you give a few examples of how much and the kind of attention these trees got versus trees four blocks away that weren’t planted in Silva Cells? How might that attention have impacted their success today, two years later?
AM: They were 4 inch+ caliber when they arrived. If it hadn’t rained enough, around 1 inch of rain or more, then it was my job to water. I usually just approximated 50-75 gallons of water for each tree; that number was what the nursery recommended. In addition, I used my personal experience and specialist knowledge to manage them. I did the best I could for trees in a very urban, downtown space, a heat island in the city. There is a lot of concrete and buildings and very little other canopy cover from street trees. I was down there once a week during the growing season. I would probe the soil to see how it was doing. I applied water directly to the root ball. I did everything I could to baby those trees along to keep them alive.

DR: That’s great. Have you worked on other projects with Silva Cells before?
AM: I have not. This was the first instance of Silva Cells being installed in the city of Richmond. In fact, the Silva Cells are the first soil infrastructure to promote tree growth anywhere in the city. I watched as they were installing. It was a pretty neat process that looked simple to install. My experience was great. I only had one tree that had a major decline. In my professional opinion, the 4” + caliber is a bad choice; you lose root mass in the field. I would have pushed for smaller trees that were from our state, as opposed to buying from Georgia.

DR: They are all Oak trees? Can you speak to the tree species that were chosen?
AM: Yes. The area of Richmond where they live in is Shockoe Bottom. It’s downhill from other parts of the city. In the early days of Richmond, there was a river that went through. Needless to say, the area still gets wet. When it rains, it runs across the whole market space and fills up the tree wells to the point of saturation. The city picked the Oaks as they were tolerant of water and native to the area.

DR: So, it’s been over a year since you’ve worked with the trees. How are they looking now? How is the space itself thriving?
AM: From a distance, I’ve seen them doing well. The one tree that was in decline is gone, so now there are 21. A lot of people walk and bike through the space. The Capital Trail runs through the space. It’s basically a pedestrian plaza. Some of the restaurants right on the market have outdoor seating. There are a lot of people that just come and hang out, have a cup of coffee, bring their laptop to do work in the shade of the trees. The space is doing what it was meant to do: getting people outdoors, utilizing the plaza as a meeting place, and having a semi-park in the middle of downtown.

After a year of management, the Parks and Recreation Dept. of Richmond executive director left, sparking a new initiative and transferring responsibility for the space. The city now manages the market space (including the trees) itself. 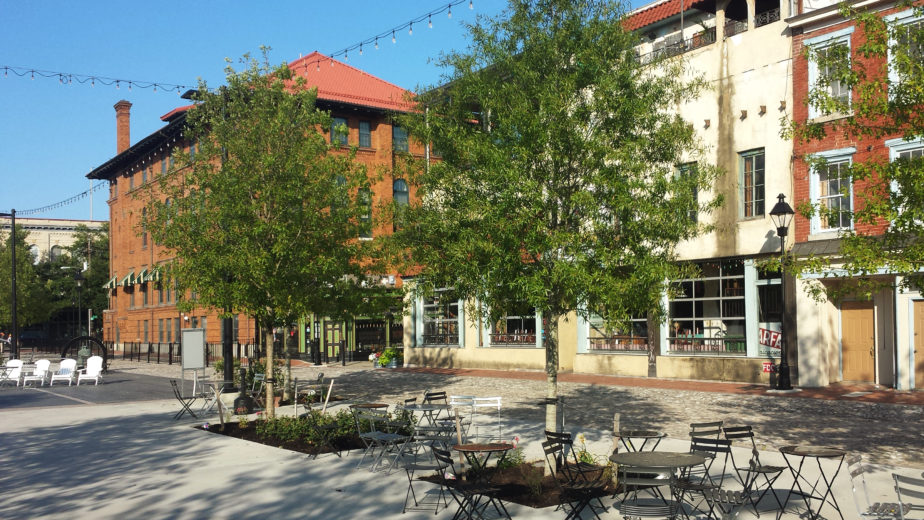 Trees at the end of July 2019. Photo taken by Tim Hamnett with Baskerville.

Thanks to Aaron McFarland, Jessica Maffey, and John Sydnor for your help with these trees in their early days and for sharing your story.