For those with a mission to enhance urban forests, it is vital to have the latest statistics for urban forest or urban tree canopy coverage. In 2010, we shared a chart by Watt and Gunther highlighting the percentage of urban tree canopy (UTC) (urban forests), broken down by city in the United States. Both the tree cover percentage and the ideal amounts have evolved over the past decade. Today there are numerous data sources, including satellite imagery, on-the-ground resources such as Google Street View, and organizations specifically aimed at creating accurate, up-to-date statistics, and future goals. Below you’ll find answers to what the recommended amount of UTC is, the most comprehensive list of UTC by state, and the UTC coverage of five major cities in the United States.

What Is Urban Tree Canopy Cover?
Urban tree canopy (UTC) is the overhead cover of leaves and greenery provided by trees that offers public health benefits, environmental insight, and economic value that includes but is not limited to beauty, shade, fruit production, wildlife habitat, energy conservation, and stormwater mitigation. UTC is maintained by community groups, residents, and local governments.

What Are the Recommended Urban Tree Canopy Targets?
An update about what the UTC numbers should be was made in 2017. American Forests, the 145-year-old nonprofit that aims to create healthy and resilient forests in urban and wild areas, has changed its 1997 target of 40% tree canopy cover for all jurisdictions to “it depends.” There are too many variables for each city, municipality, and state to have a one-size-fits-all target. In its blog post in 2017, American Forests’ VP of Urban Forestry, Ian Leahy, stated, “Research no longer supports a universal 40% tree canopy recommendation, and neither does American Forests.” Over the past 20 years, technology has changed significantly, and the urban forestry field has utilized these advances to do further research, finding that goals are not so universal.

What Are the Variables That Impact My City or State’s Urban Tree Canopy?
There are four considerations that Greg McPherson (USDA Forest Service) suggests we need to keep in mind with each urban area when arriving at an ideal UTC percentage:

What Is My State’s Urban Tree Canopy Cover?
In 2018, the U.S. Forest Service Senior Scientist, David Nowak, and Forester, Eric Greenfield published an article in the Journal of Forestry with the latest statistics, values, and future projections of tree density in the United States divided up by state. 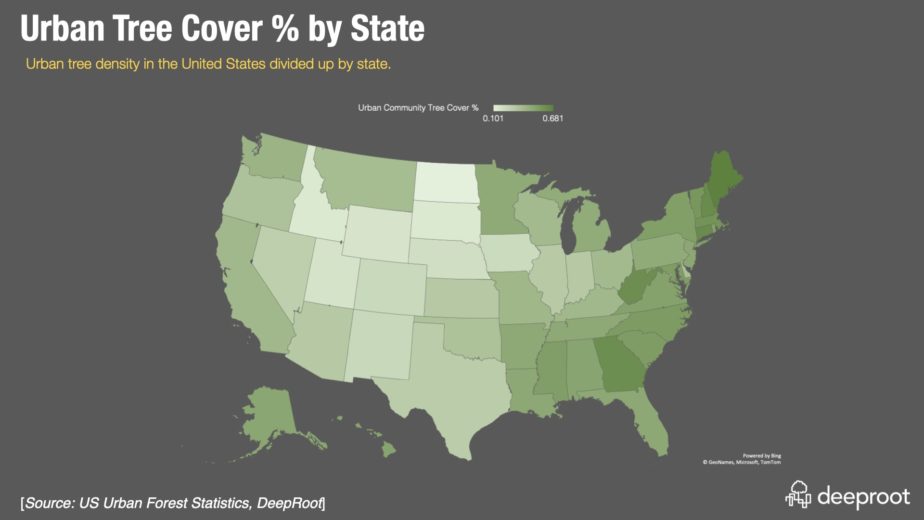 These findings are significant: 40% UTC cover in the U.S. contributes an $18 billion economic gain. Compared with Watt and Gunther’s 2010 findings of 27% UTC cover as the U.S. average. 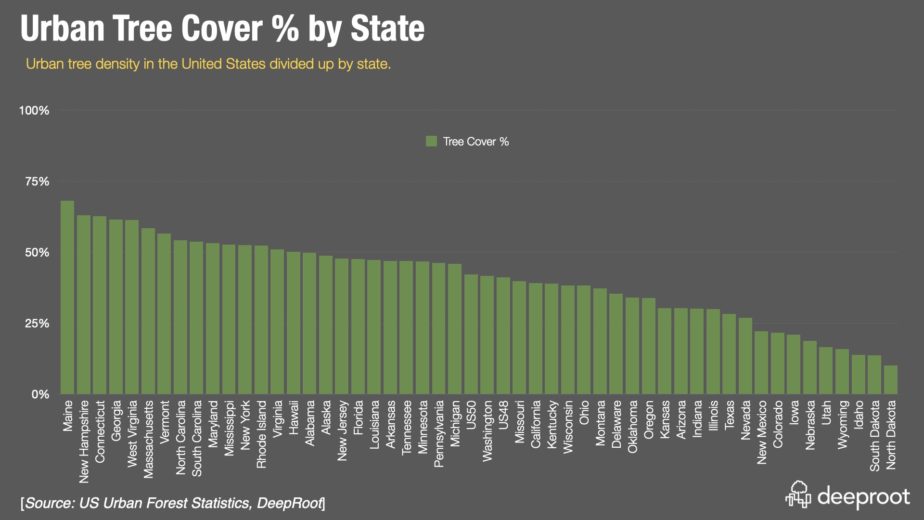 If UTC targets are created with better metrics such as those that McPherson mentioned, namely climate, land development, urban density, and ordinances, then cities and states can more efficiently plan and execute. If integrated into the streetscape thoughtfully, UTCs provide extremely effective on-site stormwater management. Large, healthy, long-living trees act as “green infrastructure” in our communities. In an increasingly warm world, they help keep temperatures low and reduce heat-island effect. They also keep the air clean and free from pollution, which is becoming more imperative as we continue to experience the effects of climate change.