San Francisco Is Rethinking Streets and Outdoor Dining During COVID-19

In addition to the once-in-a-generation public health crisis arising from COVID-19, the pandemic has also produced a number of unpleasant side effects, not the least of which are frustration, isolation, and the uprooting of many societal norms, such as dining out.

As San Francisco enters its fifth month of sheltering in place, the yearning to be sitting at a restaurant is stronger, and arguably more important, than ever. People need to get out of their apartments and houses, which have also been serving as their offices, so they vie for seats as soon as they become available during the phases of restaurant reopening. The symbiotic relationship between restaurant and guest is stronger than ever during the pandemic.

San Francisco’s streets have undergone a rapid and dramatic transformation as a result of restaurants and bars complying with social distancing mandates. Eateries on iconic streets such as Fillmore, Polk, and their surrounding neighborhoods are extending their dining space onto sidewalks or farther into the streets in an attempt to satisfy demand and remain economically viable.

With the city’s help and the creative spirit of home improvement in the air, restaurants are turning car parking spots into an open space, called a parklet. During the month of July, restaurants and bars near the Fillmore District, Lower Pacific Heights, and Lower Polk in San Francisco have expanded their outdoor dining by either creating a parklet creating a space for people to relax, revitalize, and restore themselves in their community.

So what are these extensions of outdoor restaurants? Are they here to stay? Is this just an adaptation during the pandemic? Most importantly, how are San Franciscan planners and designers incorporating another imperative restoring factor, trees and green infrastructure surrounding the parklets, for the long term.

While the concept of such outdoor dining can be seen on the streets of Paris or alleyways in Italy as far back as the 1800s, it hadn’t taken off or been consistently incorporated into design and planning in the United States until the past few decades. Parklets were first coined and developed in our home city, San Francisco, in 2005. San Francisco is known for thinking outside of the box, revolutionary ideas, and creative problem solving, and this concept is no exception.

The National Association of City Transportation Officials (NACTO) is a nonprofit that is focused on helping cities realize their goal of safe, equitable transportation options. In their Parklet Program they have defined a parklet as,

“A physical intervention that takes over one to three parking spaces, widening the sidewalk and creating places to sit, talk, play, dance, eat, read, nap, observe or park your bicycle.” 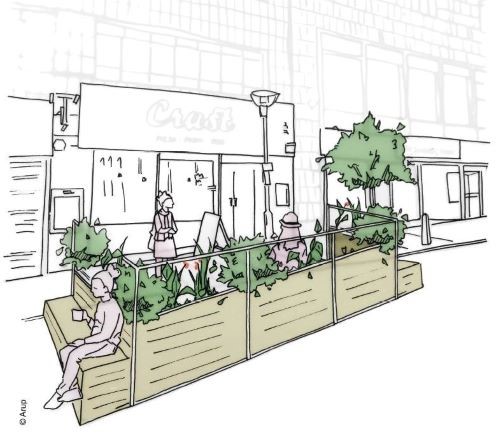 The Parklet Program is part of the grander initiative of NACTO, to allow community to participate in the beautification of the public realm by allowing store owners, community organizations, business improvement districts, and nonprofit institutions to sponsor a parklet. Since the Parklet Program took off in 2010, San Francisco has installed 38 parklets across the city. In 2015, a New York Times story reported San Francisco adding 51 parklets since 2010 to the city’s bars and restaurants. The Times interviewed the owner of the famous Tony’s Pizza, in the North Beach neighborhood of San Francisco. In 2015 the owner said it was a no-brainer to invest in the decision.

Now because of COVID-19, San Francisco has made it easy for restaurant owners to use sidewalks or streets that are normally meant for car parking by applying here. In essence , they receive an immediate “OK” to utilize space for people’s use until December 31, 2020.

Below are a series of photographs taken in the month of July. The neighborhoods of Fillmore St., Polk St., Lower Pacific Heights, and Lower Polk have reclaimed streets for people. 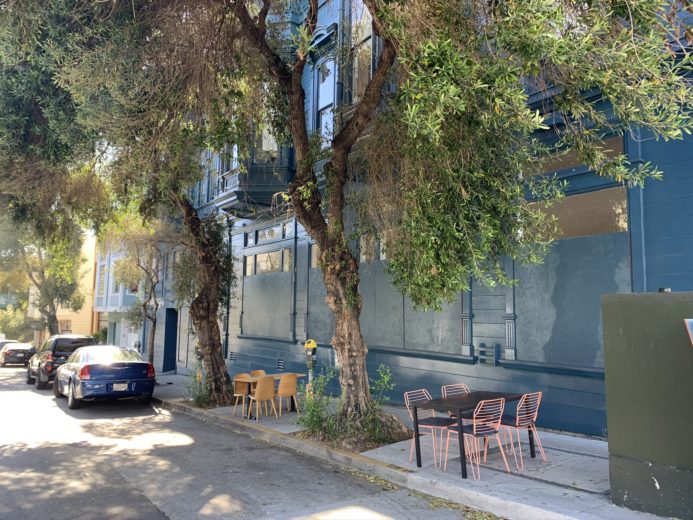 Noosh on Fillmore and Bush adds outdoor dining to the sidewalk beneath trees. Photo taken July 09, 2020

The word restaurant is a derivative of the French verb ‘restaurer’, which translates to restore. 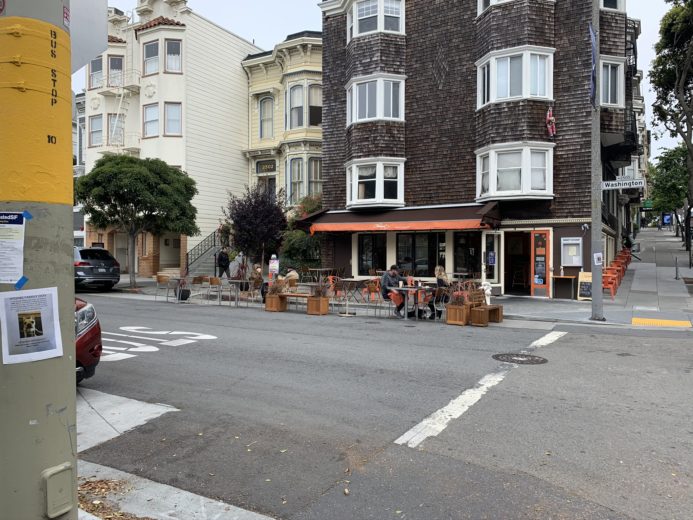 Chouquets Restaurant, on the corner of Washington and Fillmore. Tables and chairs extend into the street beyond the sidewalk. Taken July 3, 2020 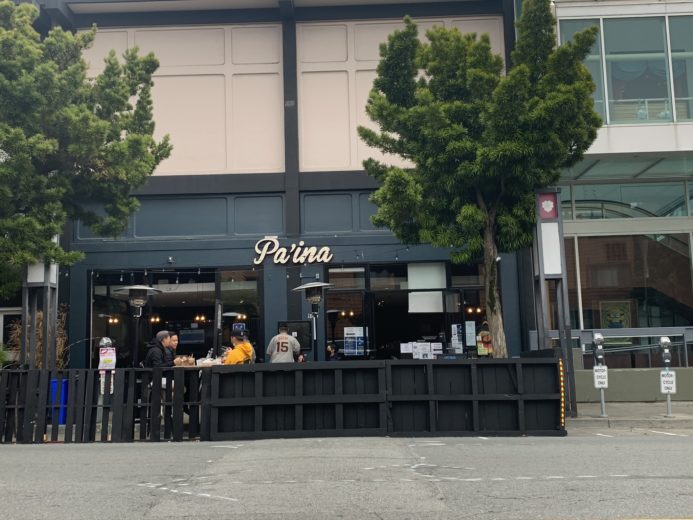 Pa’ina restaurant in Lower Pac Heights built this Parklet in early July. It takes up the space of three cars. Photo taken July 21,2020 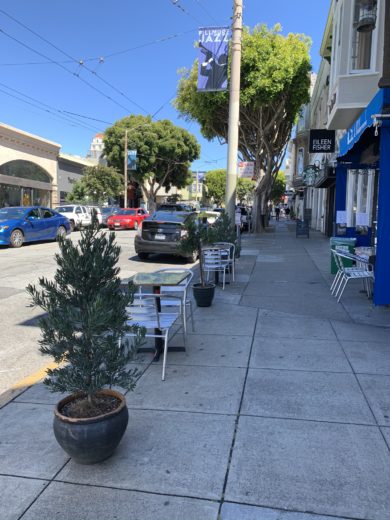 La Mediterranee Restaurant on Fillmore St. adds tables to the edge of the sidewalk with small trees near the tables. Photo taken July 22,2020 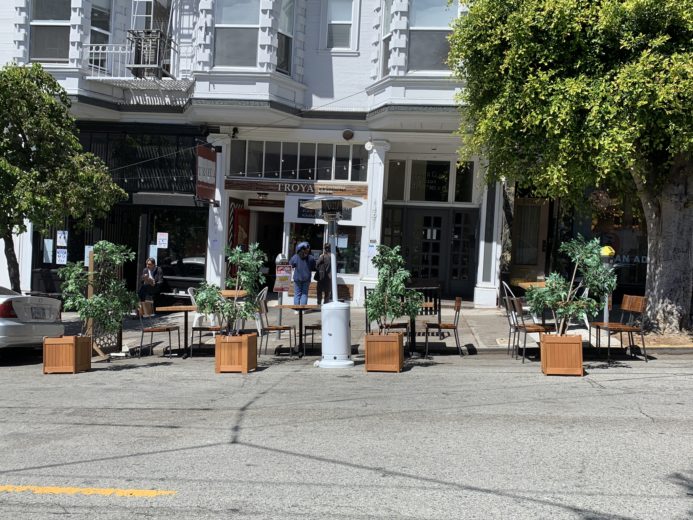 Restaurant facing view of Troya Restaurant with fake trees as a barrier between seats and the road extends outdoor dining into the street. Photo taken July 22, 2020. 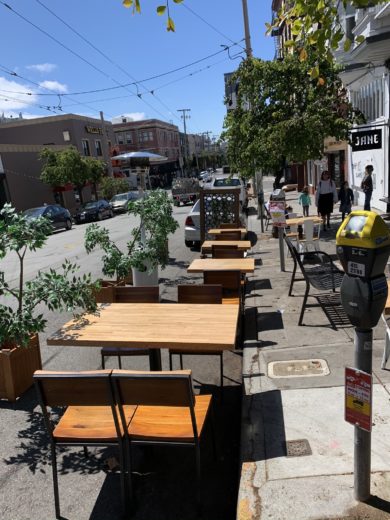 View 2 of Troya Restaurants added seats in the streets. They’ve used fake trees as a form of boundary between cars and people. 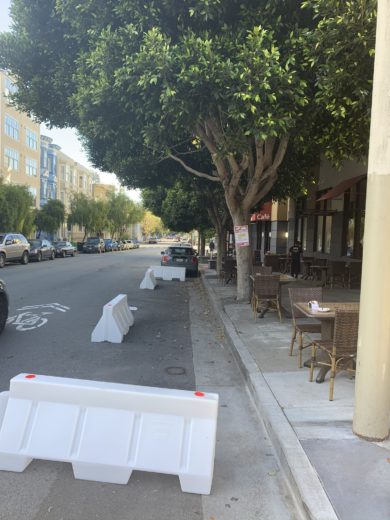 Outside of Sweet Maple restaurant in Lower Pacific Heights neighborhood. Photo taken July 8, /2020, photo facing south. Sidewalk seats with plans to extend their seats and tables into the street. 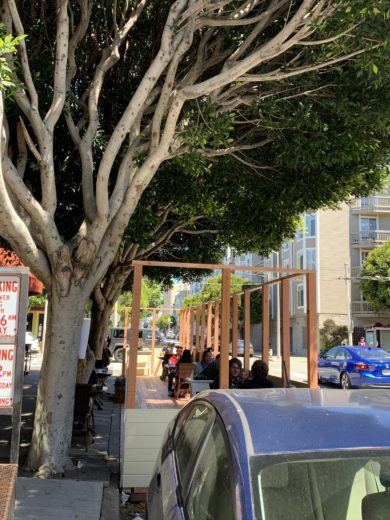 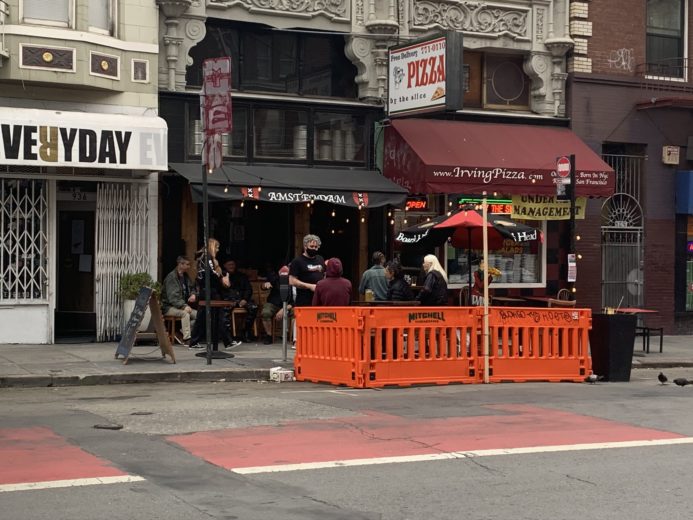 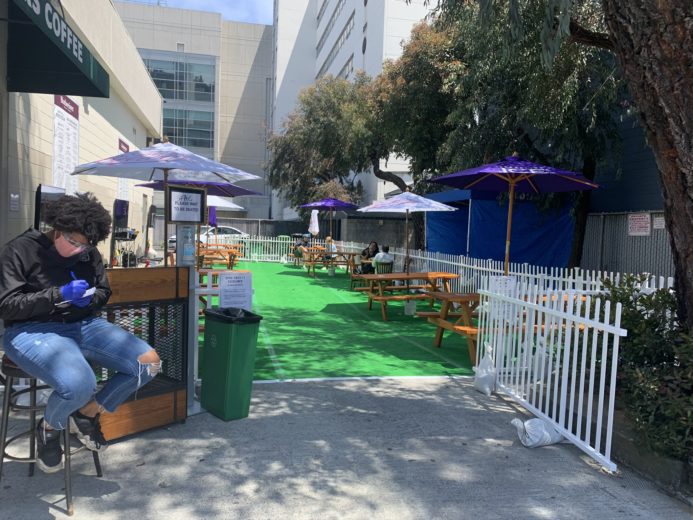 Athletic Club Bar and Restaurant in Lower Pac heights. The photos shows their new “beer garden” that used to be a Wells Fargo and Starbucks parking lot. Photo captured July 26, 2020. 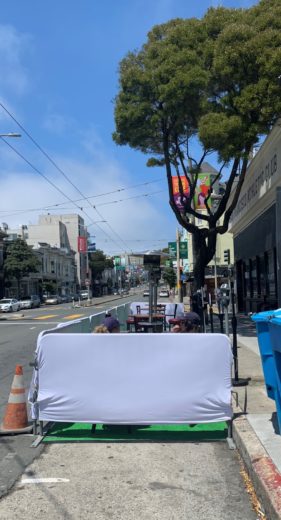 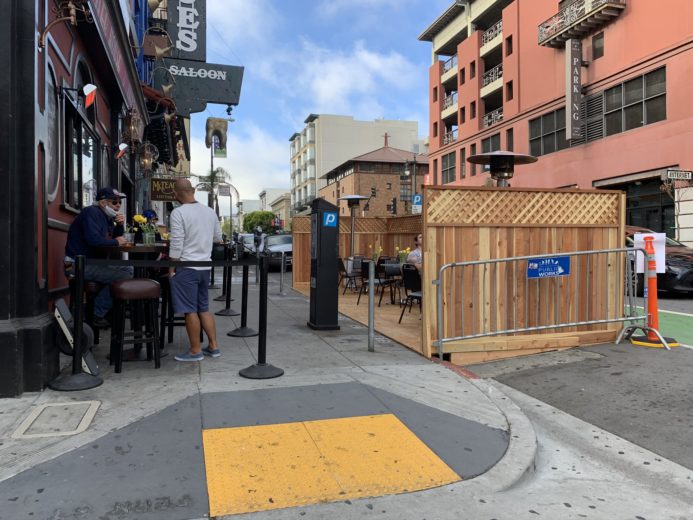 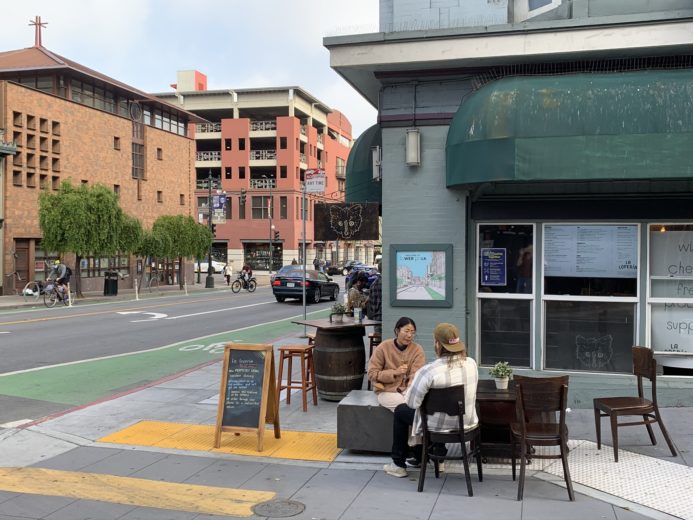 Sidewalks are paths to our community and neighborhood. Restaurants, and the neighborhoods outside of our homes, have never been more vital to help relax and to escape from the monotony of shelter-in-place and lockdown mandates.

There is an undeniable economic trend happening to the streets in San Francisco: a demand for more outdoor dining real estate, for people to use. While the COVID-19 pandemic has presented devasting impacts across several facets of life, it has also been a catalyst for change. Restaurants are doing what they have to do to allow people to visit, dine, and restore, and cities like San Francisco are making it easier to allow for a rapid transition. At DeepRoot we believe in integrating our urban areas with the natural world. Healthy, long-living, urban trees, are at the core of that effort. For outdoor diners, trees can act as resilient barriers from traffic, providing shade and controlling temperatures, helping to increase commerce, and restore us all a little bit more.