The imperative of dealing with climate change has generated the need for cities to develop “green” infrastructure. The development of green, environmentally ethical, infrastructure needs upstream support from politicians and policymakers to succeed. It also requires fundamental changes downstream to the way plans for streets and sidewalks are designed and constructed. In the past, planting trees in a city’s right of way was considered mostly a matter of aesthetics, a “soft” concern. Transportation, traffic congestion, maintaining roadways, and sidewalks: These were “hard” concerns.

To plant trees in sidewalks successfully requires more than a 4’x4’ tree pit. It requires having sufficient uncompacted soil, capturing rainwater, and resolving conflicts with utilities. As mature street trees provide a variety of important services to cities, they are literally bio-utilities. Planting trees can no longer be considered a soft concern. It is a serious concern.

The process of implementing plans for the design and (re)construction of city streets and sidewalks is similar in most large urban centers. They typically follow the same paradigm. Streets and sidewalks conceptually are seen as a linear extrusion of concrete asphalt, pipes, and ducts with various standard repeating elements. The plans typically take the form of layers of information. The details referenced on the plans are standard and shown generically with no site-specific context.

In this paradigm, a tree is shown as a green circle and referenced to a “standard” tree planting detail. Contractors can count the number of green circles as they would the number of light posts, catch basins, benches, and bicycle racks, etc. for their cost estimates. All the standard component parts, from pouring concrete curbs, the asphalt, the installation of utilities, have their own long-standing policies, specifications, procedures, and best practices that allow the sub-contractors to do their work without conflicting with each other. The whole process relies heavily on a city’s own standard policies and specifications.

For decades, the planting of trees has been shoehorned into this paradigm. The results have been, and still are, catastrophic. 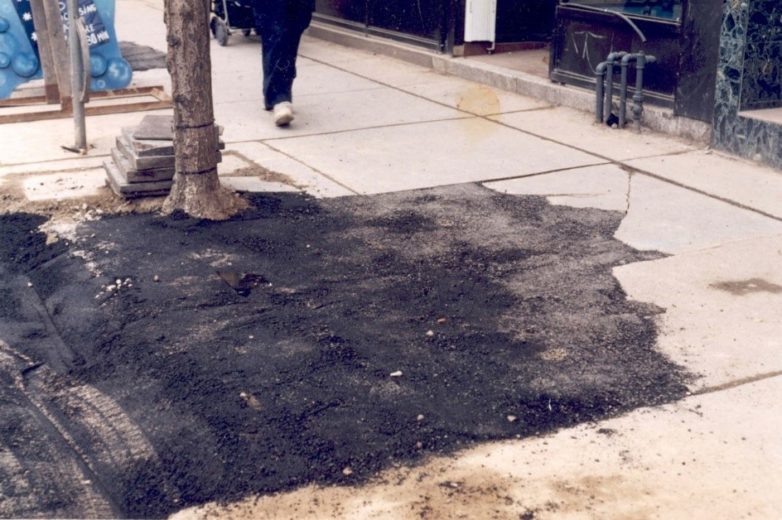 A different paradigm is possible. It is one that architects and landscape architects use. In contrast to most plans for street and sidewalk projects, the plans for buildings and landscapes show the design with all its parts integrated as a whole and in relation to varying, unique site conditions. The plans reference details that are not generic but specific to the context. All of the various components-structural, electrical, mechanical, and architectural-are integrated in the same detail. Concrete form workers know not to form beams or concrete slabs without noting where the HVAC ducts or plumbing stacks are. Architects and landscape architects also have standards, specifications, and best practices for their particular areas of concern. What has always characterized their professions is attention to matters both soft and hard. Planting a tree in a city sidewalk, if the effort is taken seriously, is both a soft and a hard problem. The development of green infrastructure for cities is both a soft and an especially hard problem.

In order to solve these problems, the old paradigm for the design and construction of streets and sidewalks must adopt some of the sensibilities that are needed for the design of buildings and landscapes. Many cities are beginning to be engaged in this effort. Silva Cells offer a key to reconciling the soft and hard problems. They make it possible to supply sufficient volumes of uncompacted soil to grow mature trees while providing the structural support for sidewalks and utilities below. Such a sidewalk can also become a stormwater reduction system. The whole assembly—the sidewalk, soil, trees, utilities—becomes a coordinated piece of city infrastructure, a piece of green infrastructure.

Silva Cells help make such projects technically feasible; however, executing them still presents a huge challenge. Many projects have been realized only through the efforts of committed professionals, landscape architects, engineers, contractors, utility companies, and those involved in the design and approvals process. What makes constructing such projects so challenging is that these integrated assemblies are being designed and shoehorned into the old paradigm.

Planting a tree with Silva Cells is compatible in the new paradigm.  Incorporating a whole new assembly of integrated components, both soft and hard, is very challenging but necessary. The new paradigm allows all stakeholders to participate in the process. The gas, hydroelectric, and telecom companies; the landscape architects, arborists, and urban foresters; and the civic and transportation engineers are all bringing their own best practices to this process.

All parties involved cannot simply apply their best practices and hope to achieve a successful, integrated, and well-coordinated project. In order to make such projects possible, creativity, collaboration, and compromise are required (CC&C). There are, as of yet, no best practices with supporting policies and specifications for sidewalks that encapsulate the CC&C needed to create a green infrastructure in a form that would serve to facilitate future projects. If only CC&C could be bottled. The successful projects thus far have been realized thanks to the CC&C that has taken place on the drawing boards, in the field, and sometimes literally in the trenches.

The old paradigm, particularly with respect to utilities and trees, uses a totally opposite approach. Far from collaborating and compromising, the general strategy is to provide as much separation as possible from one another so they can follow their respective best practices and hopefully avoid coming into conflict. The main tenet of that paradigm, keep your distance to avoid conflict, was applied to trees as well. Horizontal and vertical clearance requirements between a root ball and a gas main or electrical duct bank have been enforced for decades, often making tree planting difficult if not impossible. The City of Toronto has a Green Standard Policy that requires that all trees in the right of way have access to 30 m3 of soil. 300 Front St. Toronto, illustrates the policy based on the city’s new details for tree planting in sidewalks.

Trees leave more than 90% of their roots back in the nursery. A newly balled and burlaped tree will spend the first two to five years recovering from the surgery.In the old paradigm, a tree is thought of as a B&B, a “balled and burlap” root ball. The problem is that this does not constitute a tree. A 4″caliper stem with a 36″ diameter root ball had roots that extended 10′ or more in each direction back in the nursery before it was spaded and wrapped in burlap. Since learning this, I can only ever see that burlap as a surgical gauze covering an amputated limb.
The city of Toronto’s “green standard” specifies trees be provided with access to a minimum of 30 m3 of soil. This, according to Jim Urban’s research (Up By Roots; International Society of Arboriculture; 2008), will support the growth of a tree of about 16″ dbh (diameter at breast height). 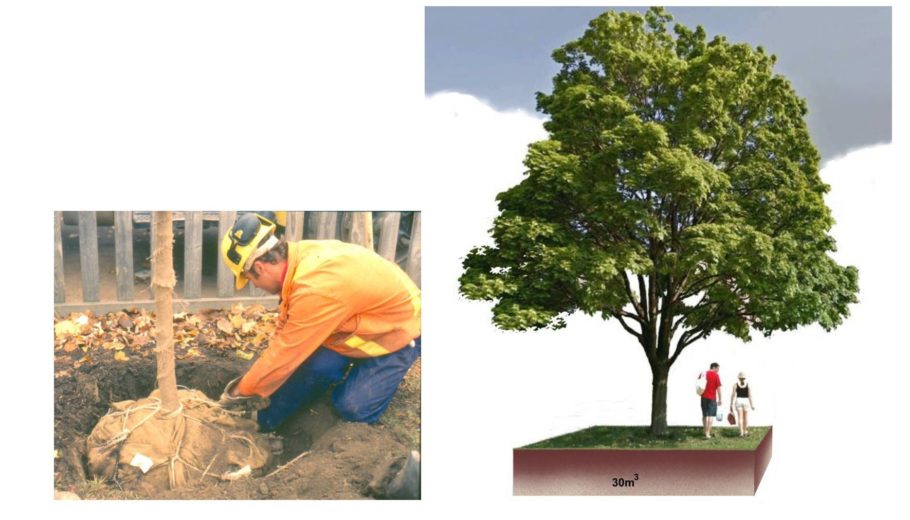 A balled and burlap tree was considered a tree in the old paradigm.
The city of Toronto is working on a new paradigm. All trees in the public right of way must have access to a minimum of 30 m3 of soil.

Meanwhile utilities, gas, electrical, etc. have policies that restrict tree planting on or near their ducts. The clearance requirement is expressed as a dimension from the duct to the rootball measured horizontally along the surface. In Toronto the requirement has been 24”. The utility may be 3 to 4 feet below the surface but if the horizontal distance is less than 24” to the rootball, permission to plant is denied. This has resulted in projects where a few inches have made the difference between being able to plant a tree or not. A few inches seem irrelevant in the context of a mature tree.
What should be relevant is the specifications and protocols contractors need to follow, from excavators to arborists, when working around a tree or a utility. They would have to follow the same procedure whether the tree was planted a few inches this way or that. Integrating tree planting with utilities is a challenge that is occurring in many cities. Many cities have high-level policies intended to advance the efforts of developing a green infrastructure, while downstream the gatekeepers are applying the ground rules of the old paradigm.

It requires those committed professionals involved, from design to approval to construction, all with a dose of CC&C, to get the job done. Silva Cells provide a key component in the development of green infrastructure. But in order to scale up from the one-off projects constructed with exceptional effort to a citywide green infrastructure, a new paradigm is needed. This requires the upstream support of politicians and policymakers who can support those downstream to develop new policies, new details, specifications, and best practices for the various integrated designs needed for green infrastructure. Many cities are in the early stages of undertaking this challenge. Toronto has made significant progress in this regard. And Silva Cells have been a key component.

Stay tuned for the next five blogs to follow that include case studies from Toronto that illustrate the shifting from a linear to C, C,&C paradigm, achieving Green Infrastructure.

Peter founded the consultancy TreeCity in 2019 after 20 years working for the City of Toronto’s Urban Forestry division. Peter was heavily involved in the design of new sidewalks and tree planting details along with developing policies and construction details that support the integration of trees and utilities. Through his efforts the Urban Forestry was recognized as a member of the Toronto Public Utility Coordinating Committee (TPUCC). Notably Peter was instrumental in the development of the soil volume policy for the Toronto Green Standard. The policy makes the provision of sufficient soil to support a 40% tree canopy, mandatory for all new developments.

In 2013, in recognition of his work on behalf of trees in the urban landscape, the OALA made him an Honorary Member.

Prior to working for the City of Toronto, Peter worked as an architect and urban planning consultant in private practice. Peter graduated from the University of Toronto Faculty of Architecture in 1975.