Much of our focus at DeepRoot is on streetscapes, and as such we find it interesting to think about how these areas could change in the future. Our urban environments have evolved over the last 120 years from horses dominating our city streets to combustion engine vehicles. Now we see a new shift as autonomous vehicle (AV) technology comes into use – self-driving vehicles have the potential to replace our current vehicles sooner rather than later. Autonomous vehicles are cleaner, safer, and cheaper than traditional cars. The vehicles, which are proposed to be electric, are more expensive to purchase but will likely be shared as a service with either a subscription fee or a cost per ride payment structure. Sharing the resource in this fashion allows for the cost of purchasing, maintaining, insuring, and fueling these vehicles to be spread out among many people.

Figure 4 Before and after autonomous vehicle design. Before (left), after (right).

A multidisciplinary team at the University of Minnesota comprised of experts from the Minnesota Design Center, the College of Science and Engineering, and the School of Public Affairs has been exploring how autonomous vehicles could radically transform the streetscapes we know and use today. The project, called Future Streets, is being funded by a three-year, $1.75 million grant from the National Science Foundation as part of the NSF’s Smart & Connected Communities grant program.

Working with the Minnesota Department of Transportation to first study autonomous buses, the team quickly discovered one major difference between traditional vehicles and autonomous vehicles (AVs). When humans drive vehicles, we tend to “wander” across the pavement, spreading out wear and tear of the paving material. AVs, however, drive with precision – a positive attribute in regards to safety, but one that leads to damage to the road surface much more quickly than with a traditional vehicle.  AVs will begin to rut an asphalt road within mere weeks (See Figure 1), forcing designers to think about what future paving materials could be used.  The University of Minnesota team asserts that this new design could consist of reinforced-concrete tracks or grade beams for the AVs to drive along, which would not only provide a resilient surface for the AVs, but also take advantage of their precision to minimize the amount of paved area needed to create a drivable street. Instead of constructing continuously paved roads with the curb-and-gutter storm sewer systems we use today, the AV streets could replace impervious asphalt with permeable concrete pavers or low ground-cover vegetation. Then, by replacing the existing stormwater system with underground stormwater retention basins or adjacent bioswales, stormwater could be kept entirely on site.  The team calculates that for a 36,000 sq ft road surface, which today is entirely impervious, the new AV street design could feature as much as 27,000 sq ft of permeable surfaces, with only about 9,000 sq ft of impervious concrete for the driving tracks.

What’s more, AVs will move people and goods more efficiently, requiring fewer lanes. Today’s four-lane road could need only two lanes in the future, and those lanes could be narrower.  Modern lanes are typically 12 feet wide, whereas an AV lane could be just 8 feet wide.  This dramatic reduction in pavement could completely transform how we live in urban areas. Spaces no longer needed for roads and surface parking could become green space, bioretention areas, new housing, or gathering areas.

The University of Minnesota team has developed several compelling design ideas regarding how this newfound open space could reshape our communities. Fig. 2 shows a current typical collector street we might see in a commercial area of any U.S. city.  Fig. 3 illustrates what this street could look like after being adapted for AV use. The greenspace is hugely increased, and the space is now utilized for wind and solar power generation, stormwater infiltration, urban farming, and communal areas. The increase in tree canopy promotes good air quality, reduces the urban heat island, and provides habitat. Similarly, Fig. 4 shows a before (left) and after (right) scenario where a then obsolete parking lot is converted into a stormwater treatment area with increased tree canopy both in the treatment area and along the new AV street. Our lives in urban areas could change dramatically to use this newfound space we reclaim from our current “car culture” (fig. 5) 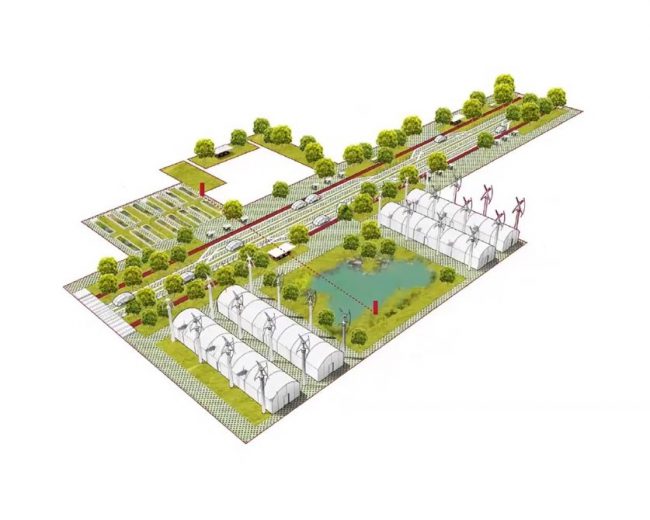 Figure 3 A model of what streets could look like after AV incorporation, including many sustainable features such as street trees, renewable energy, and green spaces. 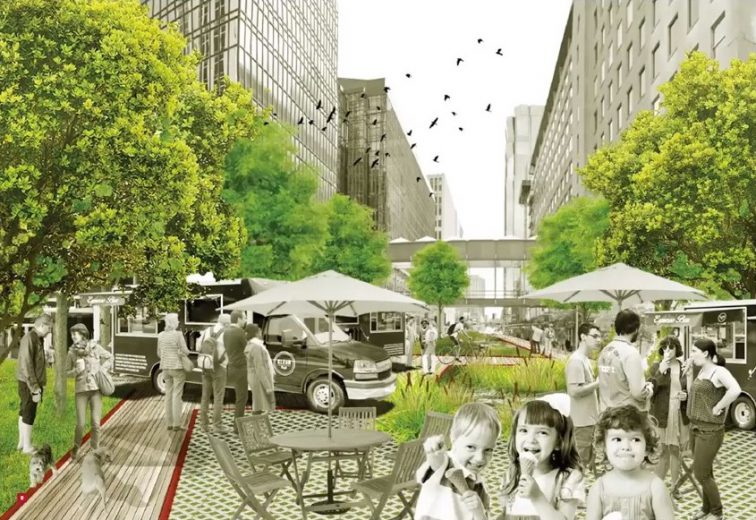 Residential areas would be home to another exciting opportunity – the new life alleys could have in an AV-centered world.  Garages, no longer needed to store vehicles, can become accessory dwelling units, workspaces, or businesses. The paved alley, today mostly impervious, could be made mostly pervious and enjoy all the benefits that come with better stormwater management and increased vegetation. Fig. 6 shows how alleys could be reimagined into useful, compelling community spaces with increased green areas and stormwater infiltration potential. On the main residential streets out front, our traditional neighborhood (fig. 7) could be upgraded to again transform large, paved areas into greener, healthier spaces for living and commuting (fig. 8). Even overhead streetlights could disappear, reducing the effects of light pollution in cities and suburbs, since the roadway itself would no longer need to be illuminated. Instead, bollards along the road could simply illuminate the adjoining sidewalk and bike paths. 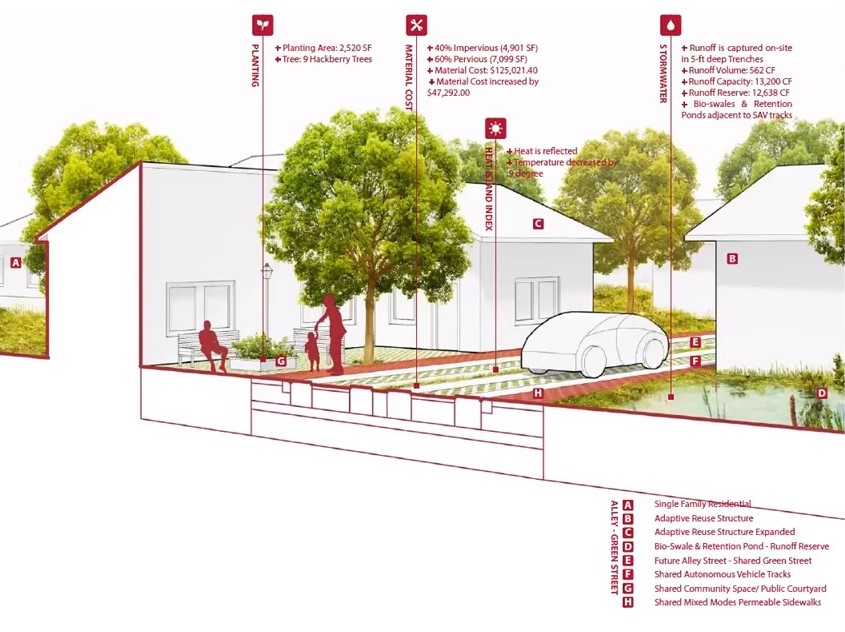 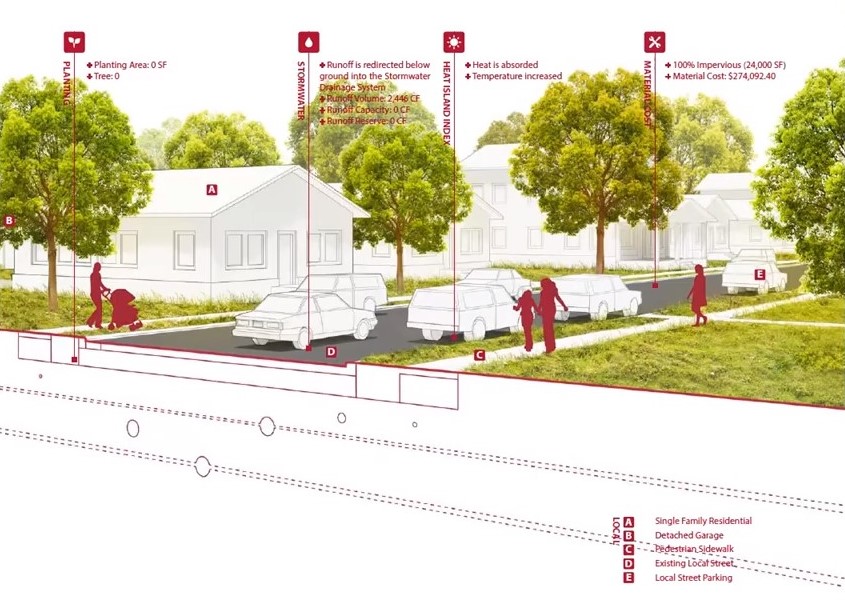 The possibilities presented by autonomous vehicles and the redesign of our roads provides a huge opportunity for civil engineers, planners, and landscape architects to create a different kind of infrastructure that is environmentally friendly, more usable, and safer than our modern-day streets.  The University of Minnesota team’s next endeavor is to work with the Minnesota Department of Transportation to develop a pilot project testing their proposed redesign of roads for AVs at various sites within the state, including the cities of Grand Rapids and Rochester. 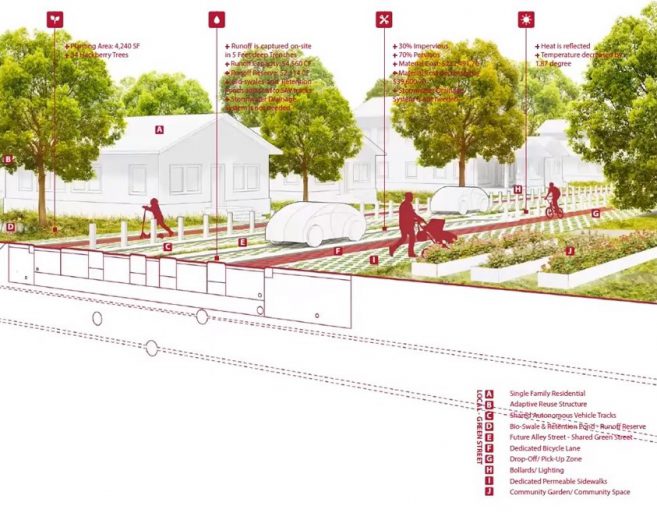 An online publication called Future Streets, summarizing the team’s findings and proposals, is expected to be released in early 2022. In the meantime, you can view a Future Streets presentation by team members Tom Fisher, Joseph Hang and Java Nyamjav from this year’s Great Northern Festival here: https://youtu.be/zqnhoeagsmM