– Barcelona is adding over 33 hectacres of green space in its most populated district.
– Construction to begin in June 2022. At the heart of all of the design? Trees.

By 2026 every resident in the Eixample district of Barcelona will be no more than 650 feet (200 meters) from a green space announced Ada Calou, the Mayor of Barcelona, in November 2020. Eixample, the largest district of Barcelona with over 260,000 residents, will have 33 hectacres (82 acres) dedicated to pedestrian use covered in green infrastructure. These areas are being called “Superblocks”.  According to BBC news, 28 super block squares will cover the area by 2026.

This idea isn’t new to Barcelona. The city’s first superblock was successfully implemented in 1993 in El Born, followed by two more in Gràcia in 2005. Barcelona Metropolitan writer, Jeff Broadsky, pointed out the original idea as far back as 1855, which Ildefons Cerda envisioned.

“The superblocks may finally deliver the lifestyle that Catalan engineer Ildefons Cerdà hoped to create when he masterminded the Eixample neighborhood in the late 19th century. His vision of a neighborhood filled with green spaces and places for residents to gather was never realized, and over time the Eixample became congested with traffic and its inner squares turned into supermarkets and carparks.” (Barcelona Metropolitan) 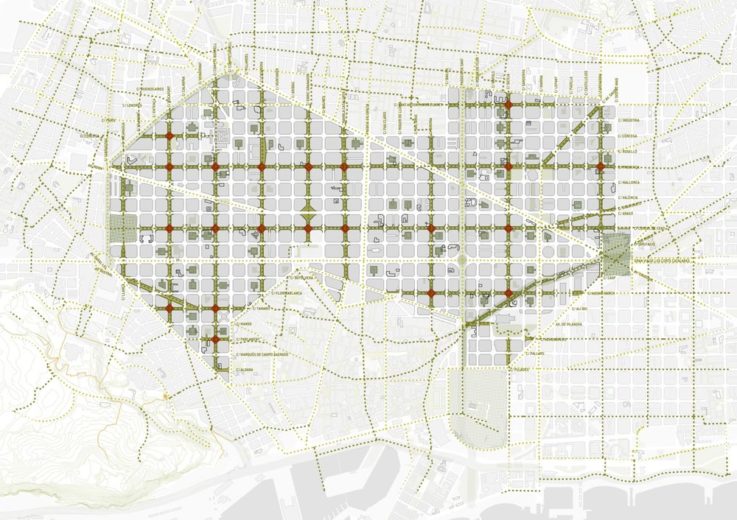 The Covid 19 Pandemic Forced a Reimagination and a Reawakening in How People and City Infrastructure Cohabitate.

The indoor mandates that brought with it only essential travel within a neighborhood increased both the awareness and the need to easily access outdoor space, and even more specifically outdoor green space. The European Investment Bank (EIB) sites this as one of their main reasons for supporting the Barcelona Superblock initiative. The EIB approved a €95 million loan in 2020 to help Barcelona complete around 40 projects, with a focus on climate action and social inequalities. €24 million of the loan is dedicated to the Superblock project, which in part includes an acceleration of their tree planting program.

The EIB further emphasizes their stance on funding green spaces, “The impact of climate change has been a major factor in recent years for urban planning, but the pandemic has added more challenges, especially on issues related to the health sector and the dense city life. Public spaces need to be organized in a way that allows people to socialize while keeping a safe distance apart.” 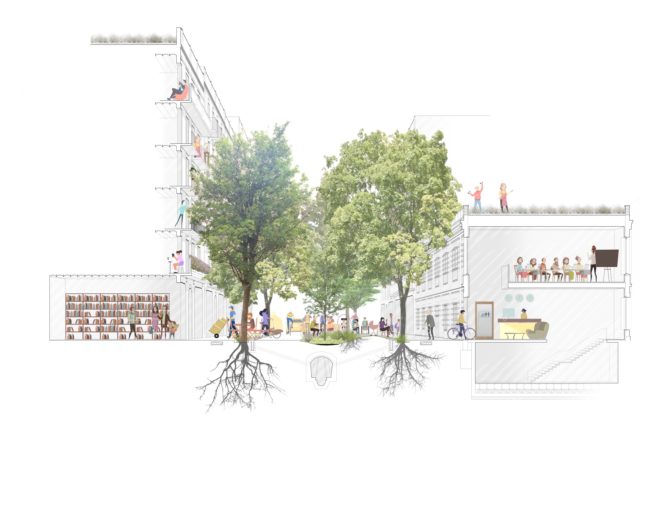 A major characteristic of a superblock is that traffic is restricted to major roads around the superblocks, leaving the streets inside for pedestrians and cyclists.  According to The Conversation, the new plan will cover 21 streets and have space for 21 new pedestrian plazas at intersections. At least 80% of each street is to be shaded by trees and 20% unpaved.

In addition to the mental health and wellbeing that are proven to come from green spaces in cities, pollution is also combated by the large number of trees in an area. The pollution that trees sequester is more than than ever for Barcelona. According to the Guardian report from early last year, “Barcelona almost never meets EU or World Health Organization [WHO] limits for nitrogen dioxide or particulate pollution. WHO NO2 limits are 40 micrograms per cubic meter, while in much of the city the level is above 47 µg/m3.”

“It is time to think about the new city for the present and the future – with less pollution, new mobility and new public spaces”.  – Mayor Ada Calou, Domus web

The Winning Design and What Barcelona Learned From The Pandemic

In March 2021, designers were welcomed to submit their design ideas for the two dozen squares that would be renovated. Of the 86 that entered, the four winners focused on the green street aspect of the Superblock transformation. The four winners all shared values that include:

– Pedestrian as the absolute protagonist
– Only private vehicles with the streets as their final destination can circulate there at only 10 km/h
– Streets must have curbless paving and guarantee universal access.
– Paving with recycled material.
– Streets that foster life, relaxation, local commerce, meet up and play potential
– Sustainable rainwater use, solar panels on streetlights, and more.

At the heart of all of these designs are, of course, trees. 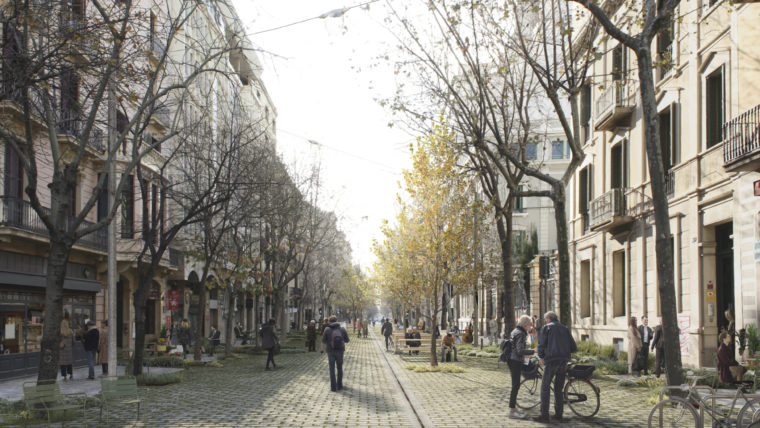 One of four winning green street designs, courtesy of Barcelona.cat

Construction on this new city Superblock model will begin in June 2022. We eagerly anticipate the opportunity and green infrastructure these designs will bring to Barcelona and look forward to watching the progress.