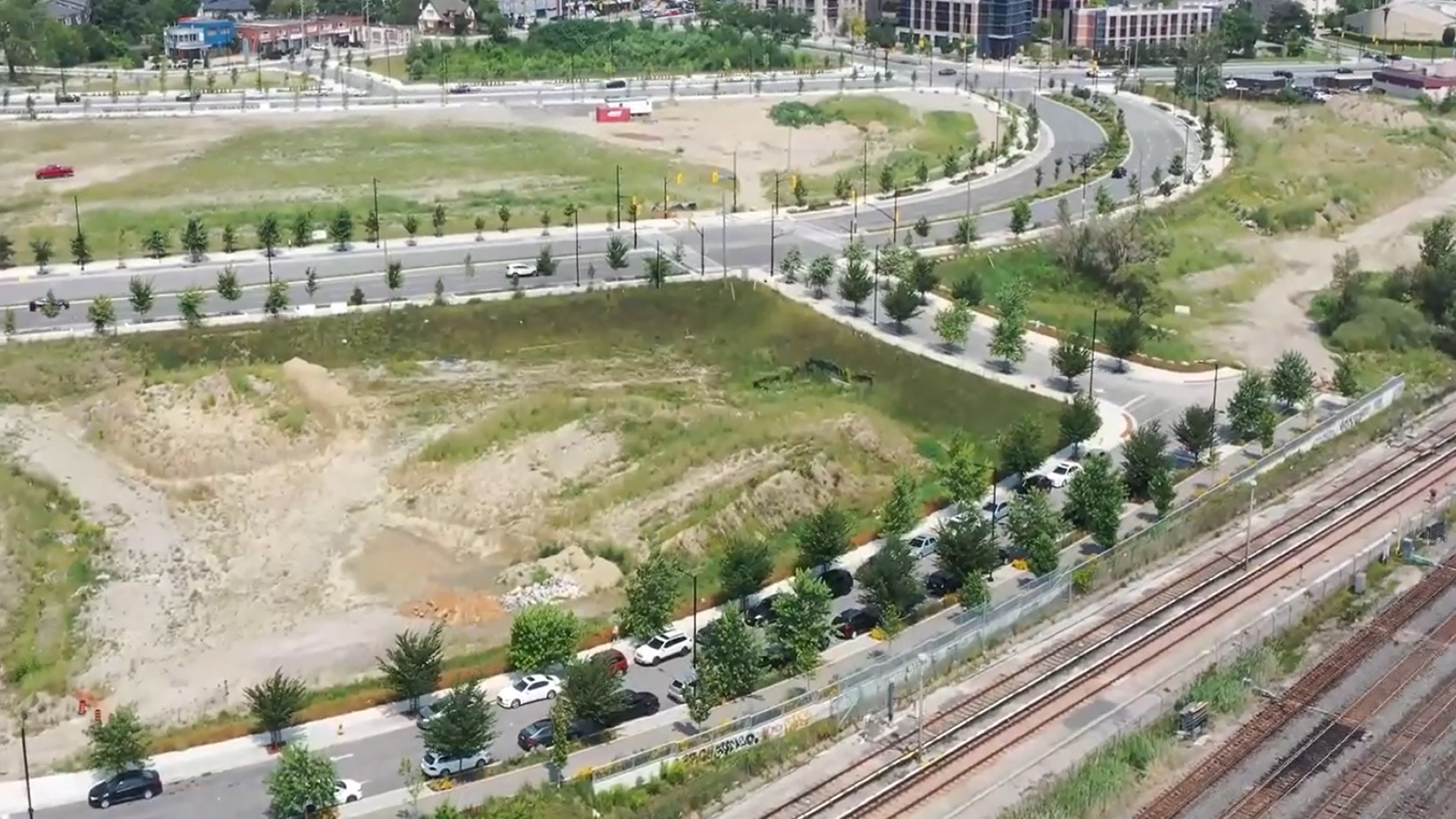 – Silva Cells helped Toronto to meet its Green Standard Goals, managing 55% of the stormwater catchment area in a 6.47-hectare site.

The Etobicoke Six Points Interchange, locally known as the “Spaghetti Junction”, has completed an extreme makeover. A key feature of the makeover in the Toronto, Ontario suburb is the addition of over 300 street trees, each one planted with an average of 30m3 of soil. DeepRoot Silva Cells provide 80% of the soil volume under the sidewalks and plaza areas, providing loosely compacted soil to help grow great urban trees while managing over 55% of the stormwater catchment area throughout the site. Other features are the removal of 3 bridges, and the addition of new roads that are pedestrian and cycling-friendly with separated bike lanes.

The interchange reconstruction comes at a cost of $50 million dollars (CAD/$36M USD) and 5 years of construction. The planning, engineering, and design have been in the works for over twelve years and anticipated for decades. The project team included three designers (HDR, SvN, & WSP), a General Contractor, (Fermar) and the client, City of Toronto. The Landscape sub-contractor that installed the Silva Cells was CRCE.

The 2 Phase project expands throughout the pulsating, Etobicoke Center at the “Junction” of Kipling, Dundas, and Bloor St. 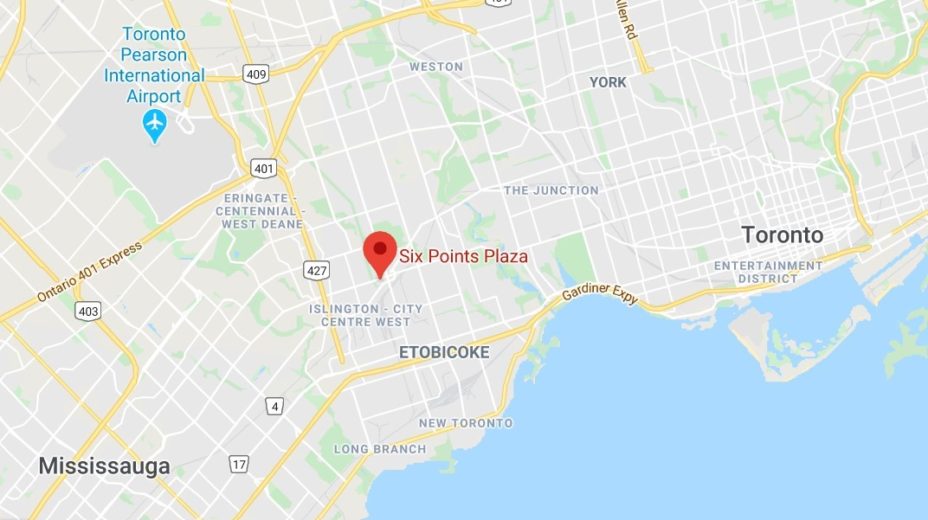 Challenges in the planning included meeting the demands of a growing population and a thriving economy, while incorporating green infrastructure in the new development. The existing interchange was a known disaster that would take immense planning and funding to fix. This was achieved through teamwork and cooperation. Fermar, the General Contractor wrote,

“The removal of three existing bridges including the reconstruction and realignment of various roads and the new road construction of three new roads, were all included under the contract making this project a complex one to navigate. It took the team time to prepare a comprehensive schedule on how the work could be carried out without substantially interfering with the high vehicle and pedestrian traffic and while keeping the community and the workers safe.”

The city of Toronto took the opportunity to meet the needs of commuters, drivers, truck haulers, but also the local community of pedestrians and cyclists. There were also some serious environmental challenges to meet at the local and municipal level.

Timeline: The Evolution And Phases Of Six Points

The City of Toronto has long been concerned with effectively managing population growth. Toronto is now the 4th largest city in North America, behind Mexico City, New York and Los Angeles. In 2008 Toronto underwent a Municipal Class Environmental Assessment (EA) to examine options to reconfigure the Six Points Interchange, supporting the development of the Etobicoke Center. Between 2009 and 2011 the city went through an urban design study which included detailed streetscape designs for new roads, pedestrian clear zones, market zones, and tree planting zones. The idea to transform the outdated intersection has been around for decades. In a 2018 Globe and Mail article about the project, The Senior vice-president of development at Build Toronto (the project lead) stated, ”We are envisioning a community that will be highly connected with the Kipling subway with great pedestrian pathways and interconnections, parks, residential with some retail and office uses.”

Phase 1 ran for two years from 2015-2017 and included the demolition of three existing bridges and roadways. Phase 2 started in March of 2017 and is scheduled to be finished in 2020.

For more details on the architecture and the design put into this green infrastructure gem, here is a video by the City of Toronto:

Toronto is a leader when it comes to setting and achieving green infrastructure goals for the city. A primary requirement for the Six Points Interchange was to comply with the Toronto Green Standard which is Toronto’s sustainable design requirements for new private and city-owned developments.

The Standard addresses the City of Toronto’s environmental priorities including improving air quality, reducing the urban heat island effect, and reducing stormwater runoff while improving the quality of stormwater draining to Lake Ontario. With the goals and the environmental standards bar set high, DeepRoot’s Silva Cells were able to provide solutions to help achieve the Green Standard Goals.

Phase 2, 2019. Silva Cells are under the new paths, joining up the planters with a continuous soil volume, in a parklet near the interchange. Image courtesy of CRCE.

To achieve the goal of 40% tree canopy targets, the city requires that each street tree be planted in a minimum of 30m3 of soil. These large volumes of uncompacted, water-absorbent, aerated planting soils help to ensure that the trees will grow to maturity and provide significant canopy in an otherwise concrete heat island.

The large volumes of uncompacted soils in the Silva Cells also act like a giant underground bioretention swale. More than 55% of the surface runoff (3.56 hectares) from the site is directed from street and sidewalk catch basins into the Silva Cells where the water is distributed into the soil through a network of perforated pipes.

The dual-use of Silva Cell as both a tree and stormwater tool meant the Silva Cell could provide stormwater services as a source control that provides quantifiable retention, detention, and water quality benefits at minimal additional cost. The soil was already paid for by using the Silva Cell to meet the mandatory soil volume standards, providing the stormwater benefits at substantially lower cost than could otherwise be managed. 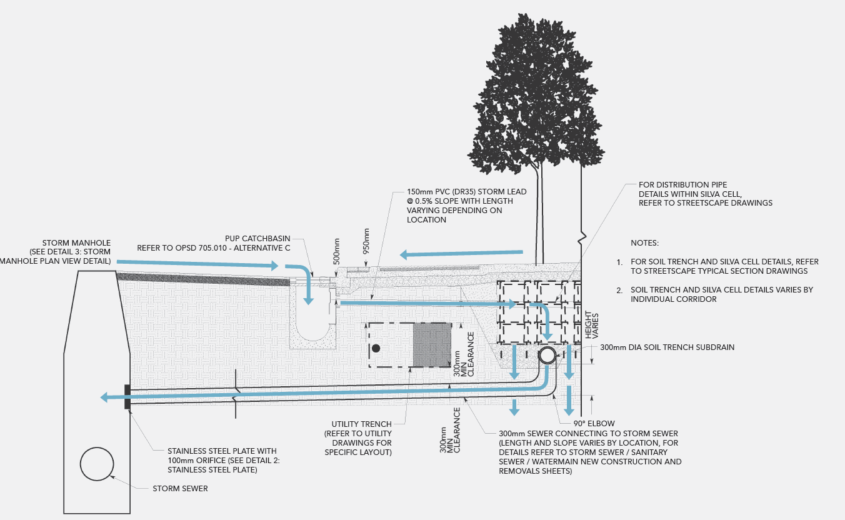 Project Water Flow Diagram: Street and Sidewalk water flow from the Catch basins to Silva Cells. Showing where the water slowly perks through the loosely compacted soils. Retention, detention and water quality criteria are met by the soil in the Silva Cells in addition to watering the trees. An aggregate cistern below the Silva Cells provides additional Detention and a 300mm overflow subdrain takes excess water back to the Main Storm line. 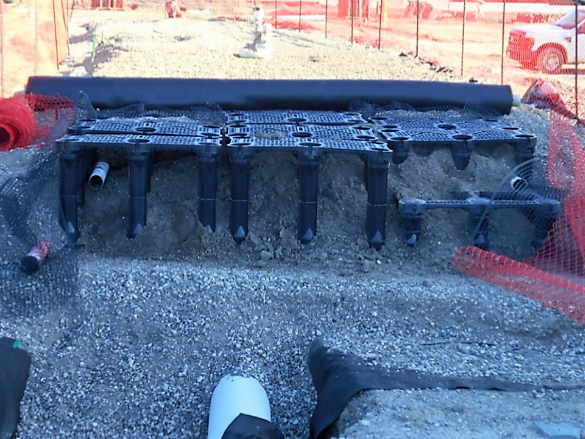 2X Silva Cell installation in 2018. Stormwater Distribution pipes in the Silva Cells and washed rock cistern with a 300mm overflow Drain line at the bottom. 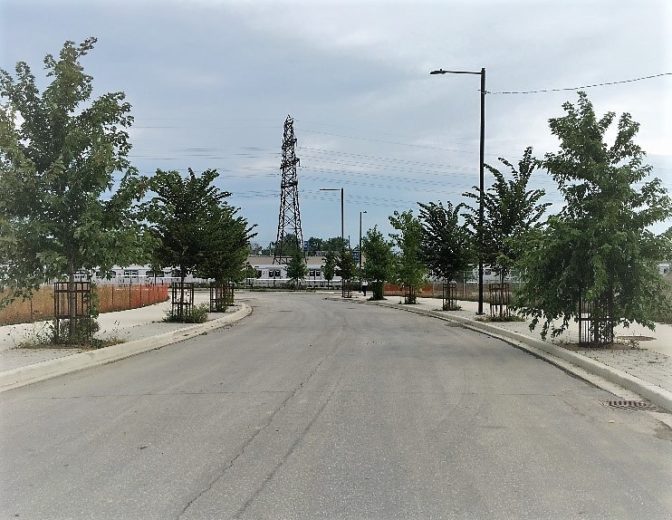 Road B lined with dozens of Maple Trees. Photo taken 2018