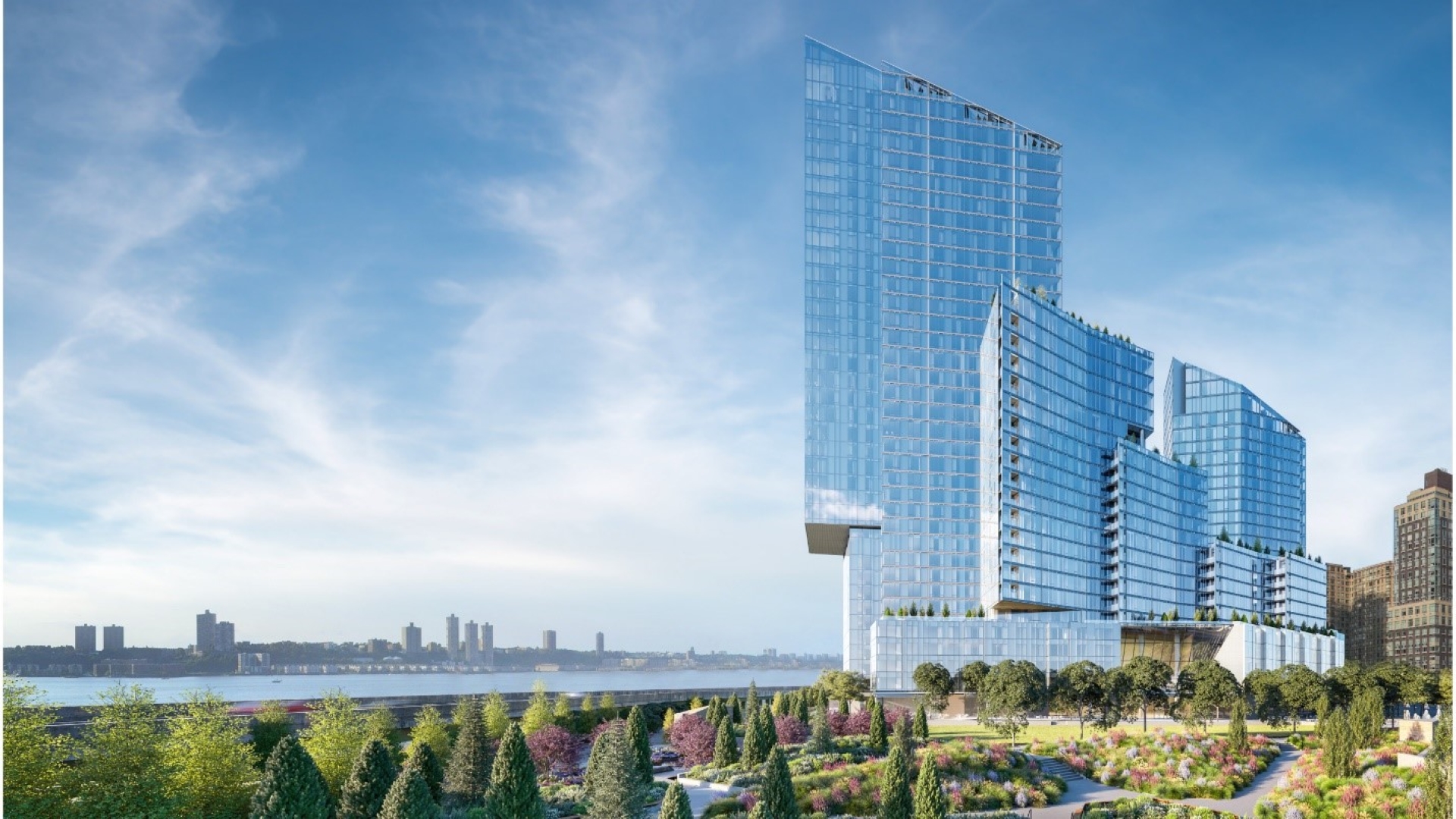 -Waterline Square is a brand-new complex on West End Avenue, between 59th and 61st Streets in New York City. It is a five-building project that started back in 2012 at Riverside Center and was completed in fall 2019.

-The development has transformed the West Side waterfront, filling a major portion of the gap between Midtown and the Upper West Side with green infrastructure.

-96 trees and 36,000 ft3 of soil fill the 5 acres of public space. They add to the sustainability of the healthy, urban green space at Waterline Square.

As of year-end 2019, New York had another oasis of trees and green space to add to its list of projects made even more successful by Silva Cells. Manhattan’s Waterline Square complex joins the likes of the Metropolitan Museum of Art, the Lincoln Center Bosque, and the 65th Street streetscape in front of the Juilliard School in having trees installed with the bioretention and modular suspended pavement system, Silva Cell. Like all DeepRoot projects, the trees and green space at Waterline Square will be resilient in the face of anthropogenic urban pressures as well as environmental changes.

Today Waterline Square is transformed. Gone is the misused parcel of old industrial railway, desolate parking lots, and storage sites. In its place after seven years of construction, the West End of Manhattan has five new buildings that include schools, luxury apartments, affordable housing, and dining. The designers ensured pristine luxury architecture and green infrastructure, which was designed by Mathews Nielsen Landscape Architects, P.C (MNLA). Green roofs, rooftop gardens, plants, and dozens of trees complement and intertwine with nature among the buildings, adjacent to the Hudson River.

In anticipation of more frequent storms and increased precipitation levels from climate change-induced extreme weather events, the newly constructed buildings took proper precautions. Times Hudson Valley did a climate report in 2019 covering this issue, stating,
“With increasing severity of storms comes an increase in precipitation levels, risking greater flooding. New York state is experiencing sea-level rise faster than national and global averages. Since 1900 the Hudson River has risen 15 inches. The DEC projects that the lower Hudson River region (Kingston to New York City) could see a rise of 2-10 inches in the next decade, and anywhere from 15-75 inches of sea-level rise by the end of the century.”

Choosing Silva Cell in this project not only enhanced the trees’ abilities to thrive for another half-century but also controlled and managed the potential flood and stormwaters, while improving water quality, a critical issue for a project so close to the river.  Most of the streetscape was built on structure with custom-designed, free-draining concrete planting beds dimensioned specifically to receive the Silva Cells.  The advantages of this bed were many. For instance, they kept utilities outside the cells, thus not displacing any soil available for the trees. Also, they will hold a known quantity of water that is held in the pores of the sandy loam used at the site, and sped construction productivity. 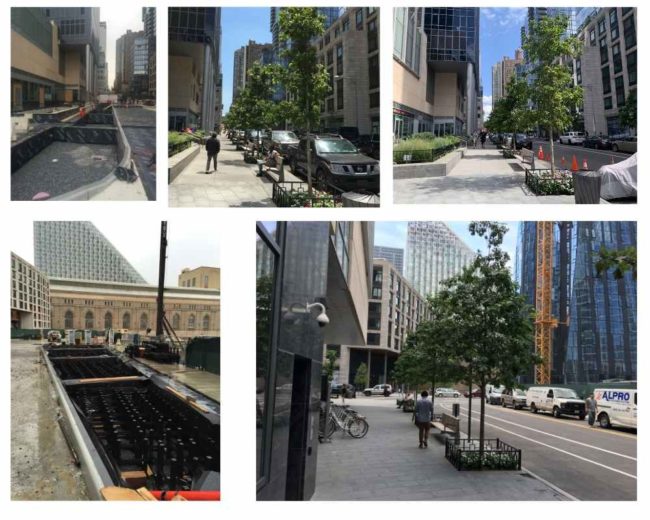 The Building Stages, Soil, and Trees 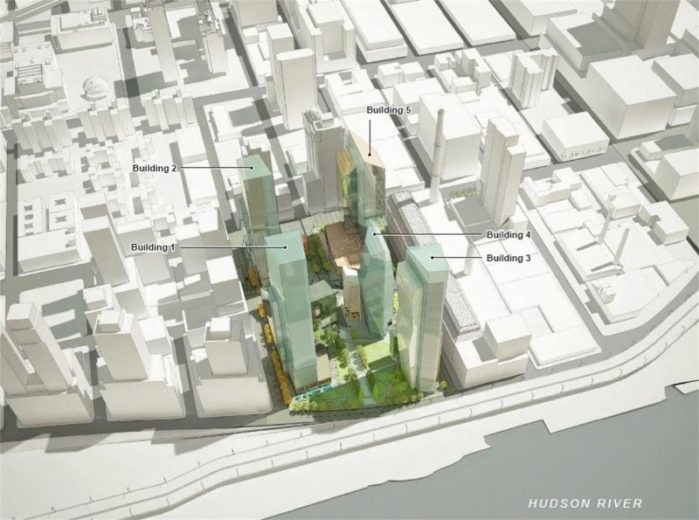 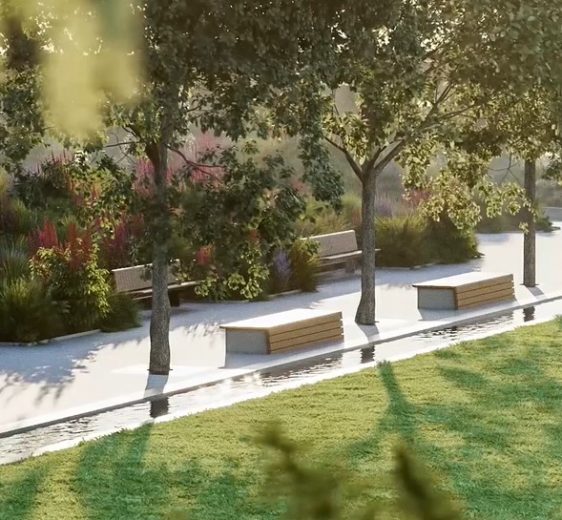 Outside of the Waterline Square park are six blocks of trees that went up in similar phases as the five buildings. Freedom Place and 60th St. between West End and 12th Ave. Buildings 2 and 5 along Freedom Place and 59th St. and 61st St. and the corner of West End Ave have Silva Cells in the ground outside of the buildings. The three phases of Silva Cells include a total of 36,000 ft3 of soil volume that will be sustained at Waterline Square for decades to come.

The public park in the middle of all five buildings is 1.7 acres and contains 64 trees in Silva Cells. DeepRoot’s infrastructure below ground will add to the longevity and sustainability of the public park.
The open space is designed as a transition from urban streetscape to a park as the topography descends toward the river. A vibrant social hub greets the public at the terminus of West 60th Street, giving way to open areas that serve as the front yard and play spaces for the residents and surrounding neighborhood. The western end of the park opens toward the Hudson while shaping immersive reflective spaces that offer a peaceful respite from the urban bustle. MNLA took special care to ensure the transition from the vehicular to the pedestrian had sufficient high-quality soil, as these walkways had to be shaded and green. 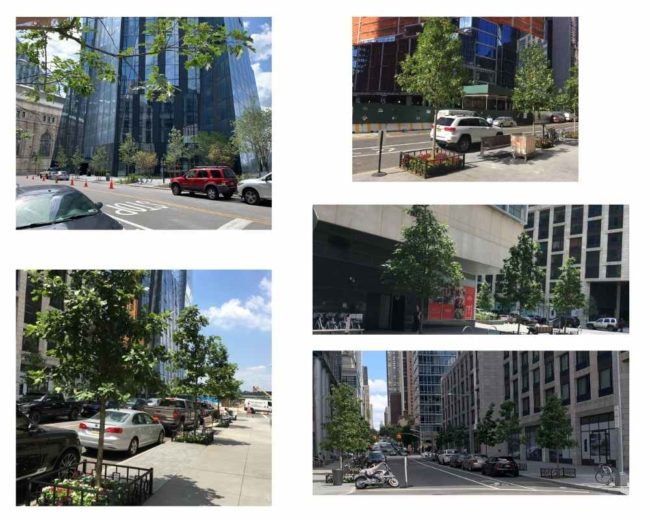 Testimonials from the teams

-Tishman Construction, the general contractor, recently reported, “The streetscape and plaza portions of Waterside Square were easily completed over multiple years.” Steven Efthymiou, project manager, Tishman construction, further elaborated, “The installation went very smoothly, and the cells performed well in their constructability. They were easy enough for the various trades to coordinate amongst themselves, so that was a bonus. The different methods used for the on-grade applications versus the on-structure application did not slow us down a bit.”

-The Landscape contractor Harder Services worked on all three projects at Waterline Square. Their site superintendent, Joe Umana, stated, “The system is easy to work and is designed so you can you put it together in a method of layering soil and fill interchangeably. It went quick.”

-The designer and project manager at MNLA, Greg Leonard, responded similarly to the contractors stating, “Silva Cells allowed a highly complicated landscape built over structure to adapt easily to design revisions during construction without sacrificing healthy soil volumes for our trees. The flexibility of the system proved instrumental in ensuring that we could maintain both design integrity and tree health.”

Accolades: Affordable housing and sustainability from the client and designer

In 2019 it won the award for Best High Rise Apartment Community by the National Association of Home Builders. “Its three iconic mixed-use towers include condominium units, luxury rentals and mixed-income units over a mix of commercial including retail, restaurants and market spaces. In addition to the award, its accolades for sustainability can be seen in its design for open space, bike accessibility (558 bike spaces in the garage plus 400 for cars) and a 12,000 square foot Rooftop Garden Terrace.

By investing in soil, the trees will grow larger and live longer, which also protects the client’s initial investment by reducing the frequency with which trees are replaced. MNLA has considerable experience with Silva Cells across their projects and they have been proven to give long-lasting environmental benefits, which is a goal of their committed clients.  New residents, local businesses, and the owner of buildings 1, 3, and 4, GID Development Group, couldn’t be more thrilled. In August of 2020, GID Development Group President James Linsley told New York YIMBY magazine,

“With this new development, we’ve transformed one of the last waterfront sites on the Upper West Side into a vibrant community with public park space, exciting upcoming restaurant and retail partners, and exceptional residences that many people now call home. We’re proud of this incredible project that is making a mark on the iconic New York City skyline and giving rare and coveted green space back to New Yorkers, and we’re proud to share this incredible development with our residents.” 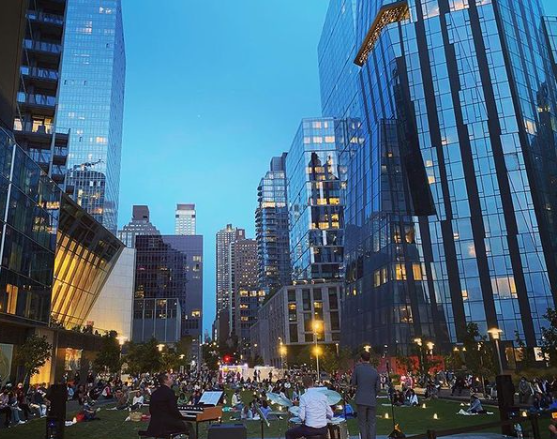 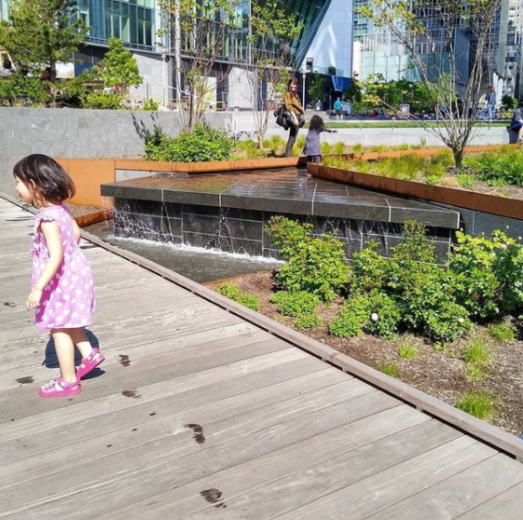