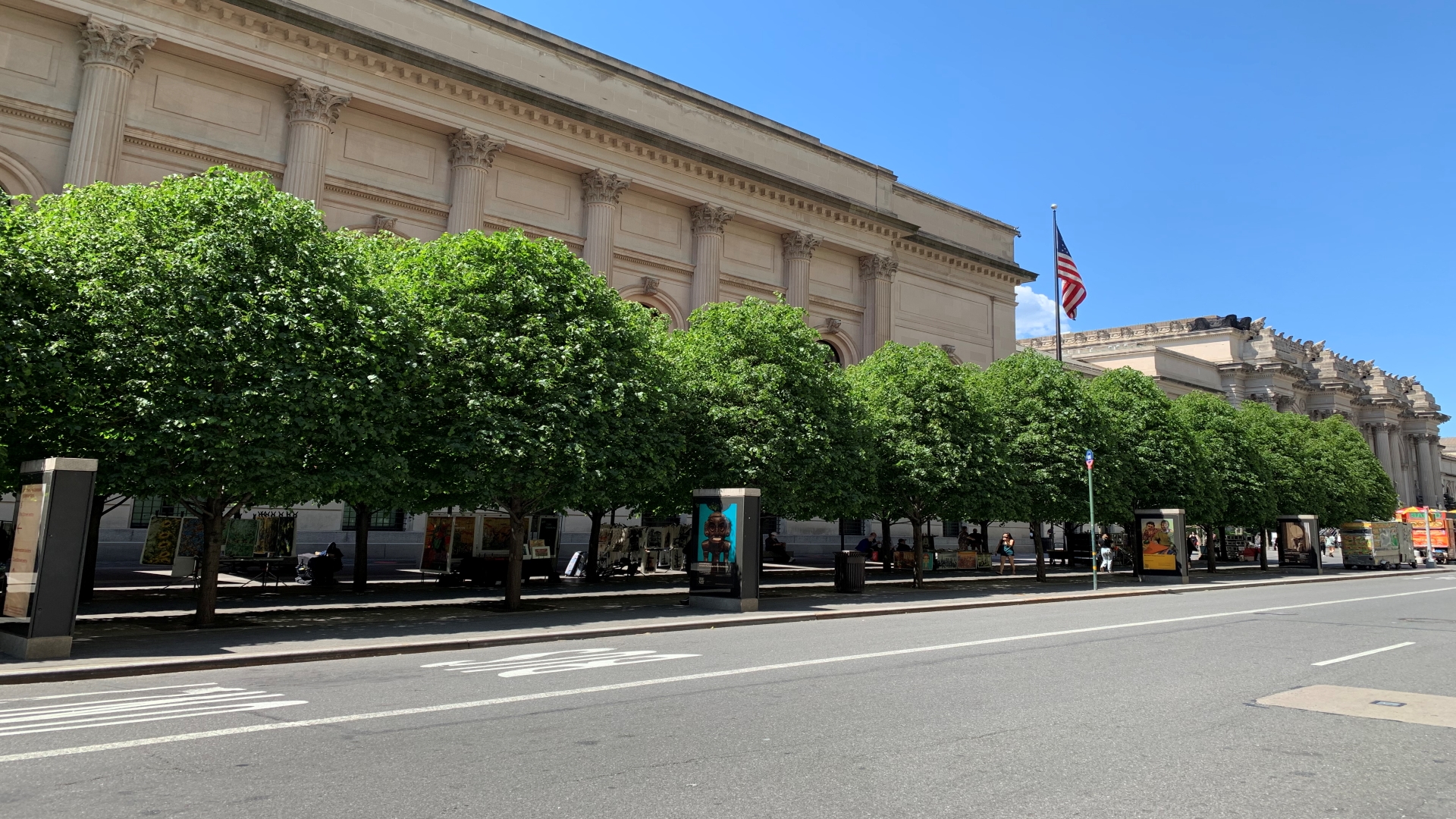 The Metropolitan Museum of Art in New York City is arguably one of the most popular public spaces in Manhattan. In 2010, the plaza was deteriorating, the fountains were dysfunctional, and the 60-year-old London Planes were moribund. The Museum sought redesign and launched a competition to rethink the entire plaza design. OLIN Studio’s architectural and elegant submission was selected as the design winner because it so highly complimented the museum’s landmark façade by Holabird and Roche and the museum wings by McKim, Mead, and White. With $65M in funding from the museum trustee, OLIN’s design more than doubled the number of plaza trees from 44 to 106. To help ensure that the trees thrived and provided stormwater management, DeepRoot Silva Cells were specified to provide 62,000 cubic feet of soil beneath the plaza.

Below ground, the Met project represented one of the most complex utility challenges DeepRoot had faced in years. Directly under the plaza were the two potable water mains for all of Manhattan. These 72-inch water mains are made of brick and date to the 1880’s. The flexibility of the Silva Cell allowed DeepTech engineers to design around these large mains using DeepRoot’s water barrier product as a root stop.

Kelco Landscaping and Construction installed 2,250 Silva Cell decks beneath the plaza to deliver soil to the trees and allow the soil to collect and manage stormwater. The depth of the Silva Cells varies between one, two, and three layers throughout the site due to the water mains running the entire length of the plaza. The crown elevation of these mains could only accommodate a single layer Silva Cell system on top, while other areas could go deeper due to the absence of other utilities.

Above ground, 6” caliper London Plane (Platanus Acerfolia) and Little Leaf Linden (Tilia Cordata) trees were planted in 2013 to shade over 17,000 square feet of the plaza’s four block faces. The design intent was to evoke to iconic European gardens by pollarding of the planes and hedging of the Lindens. As of 2021, the trees share 75% of the total plaza and have reduced the surface temperature by up to 25-degrees Fahrenheit.

According to a press release issued by the Met:

“The [DeepRoot Silva Cell] system allows for extensive subsurface tree pits that now collect and utilize on-site stormwater that would otherwise have drained into the City’s sewer system. Excess stormwater that is not captured by the subsurface tree pits… will be collected and directed into underground detention areas that hold and slowly release water into the City’s stormwater system. This gives significant relief to the extreme demand put on the City’s aging system.” 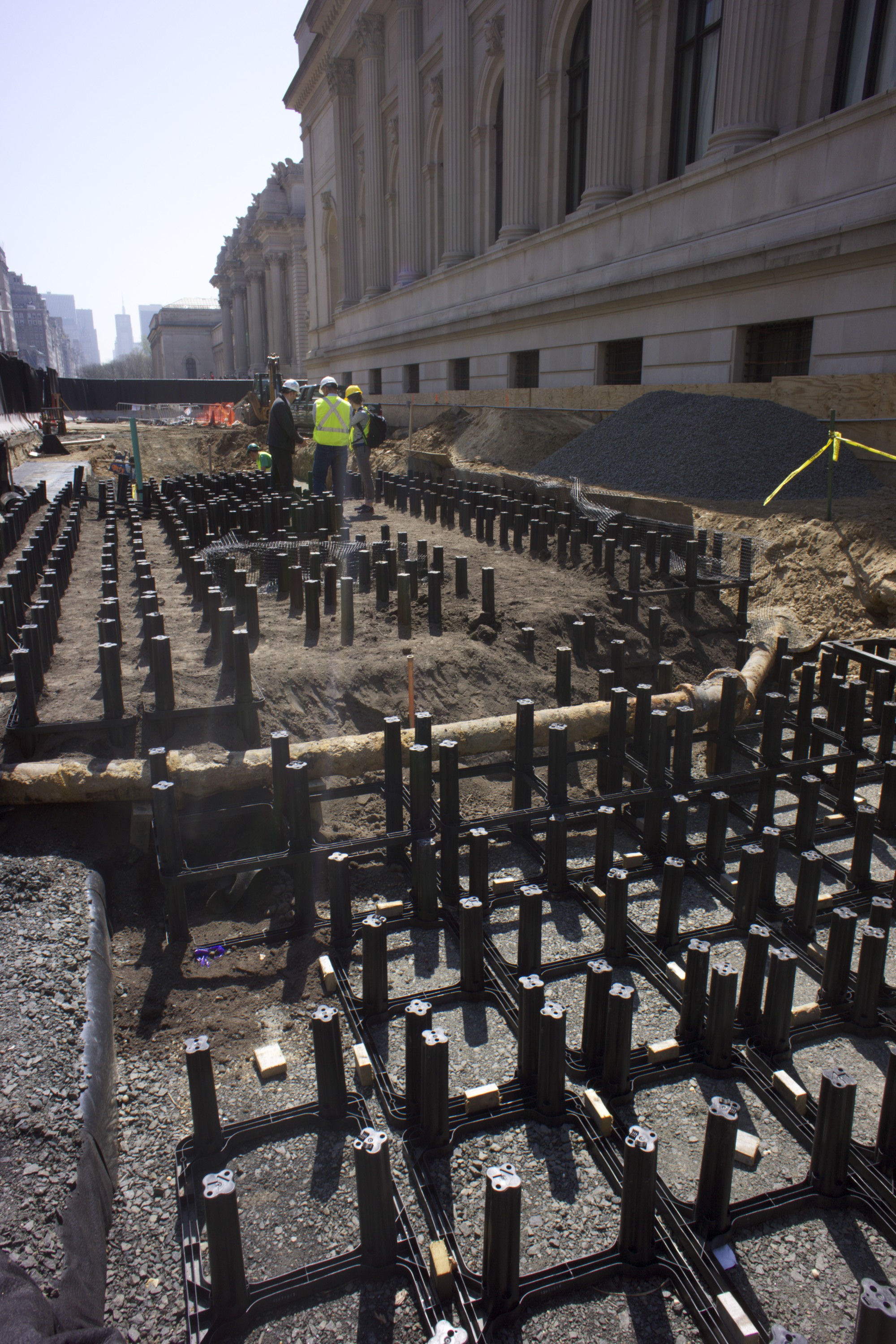 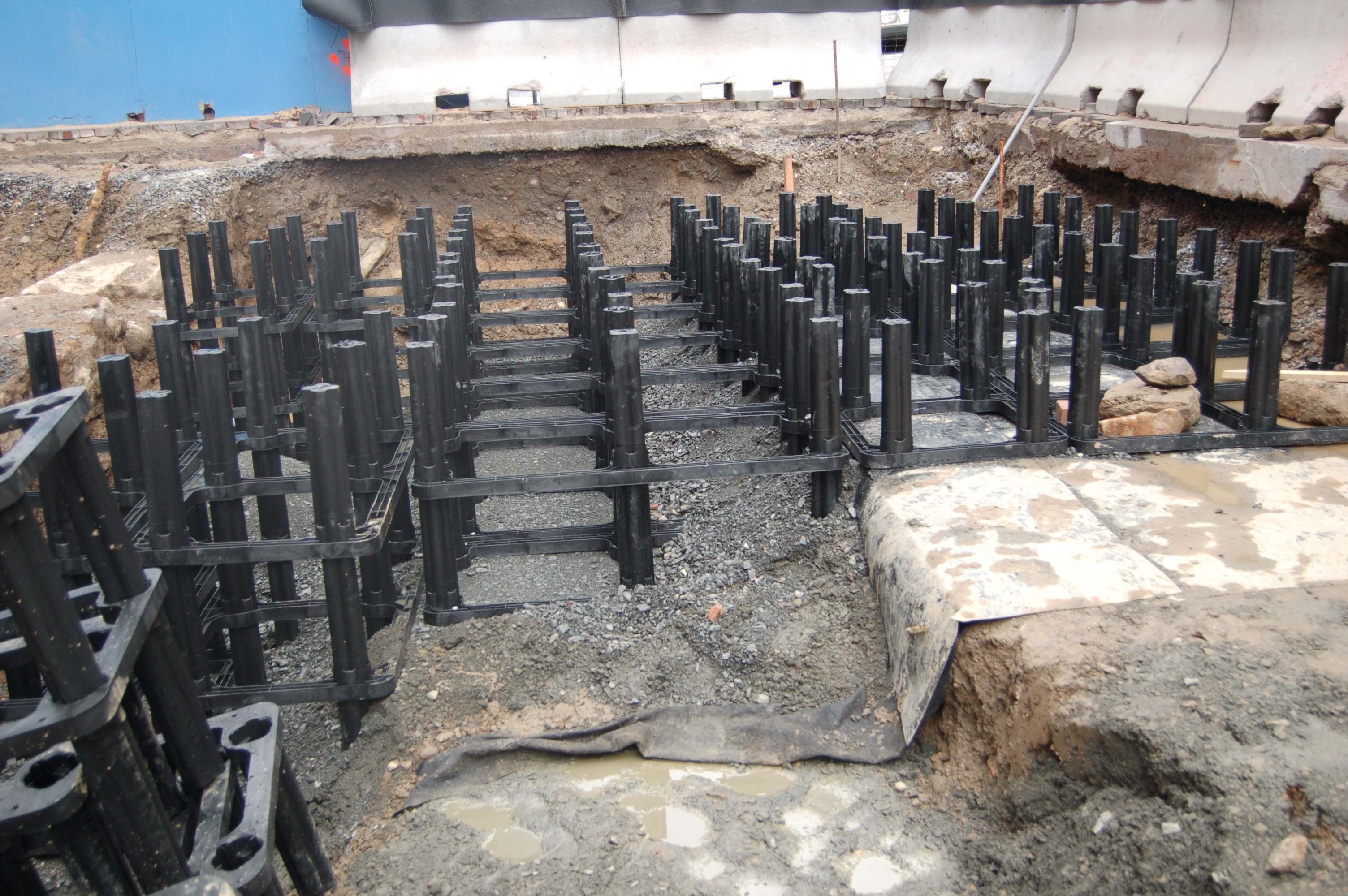 The final visual aesthetic of this stunning project includes two allées of Little Leaf Linden trees planted along the Museum’s Fifth avenue façade, continuing the shaded pedestrian access to the plaza from the perimeter of Central Park. Inside the central plaza, 4 bosques of London Plane trees were planted adjacent to the 81st and 83rd Street entrances in a square grid at a 45-degree angle to the street, their trunks forming lines that guide pedestrians toward the building entrances. Beneath the bosques lie casual, shaded seating areas offering clear views of the landscaping and water features of the plaza. Further options for seating and additional shade are provided by benches adjacent to the allées of trees and a series of cantilevered parasols. Today, the Met new plaza is a premiere destination within itself- a civic space reminiscent of the gardens of a European palace welcoming the more than 6 million annual visitors while perfectly blending the Silva Cell technology with the natural systems within the urban infrastructure. In the words of Thomas Campbell, Director and CEO of the Museum, 2009-2017:

“Finally, more than a century after the completion of the Met’s grand Fifth Avenue façade, […] the Museum has created a truly welcoming point of entry. Here now is a cityscape that is environmentally friendly and will please our visitors as they come to experience the unparalleled breadth of masterpieces on display inside.” 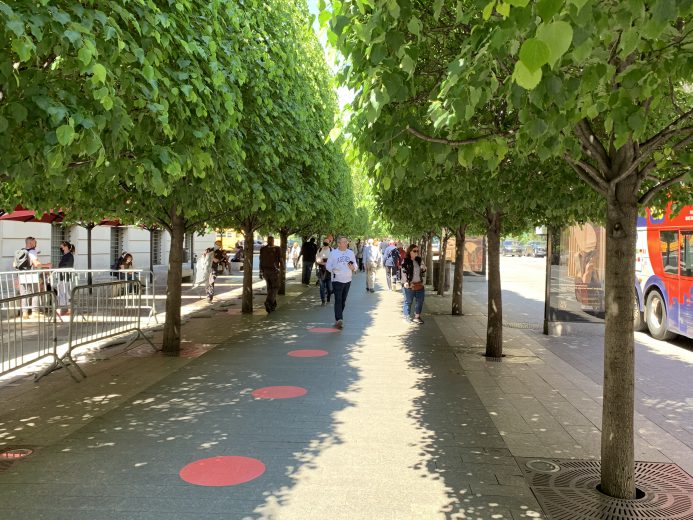