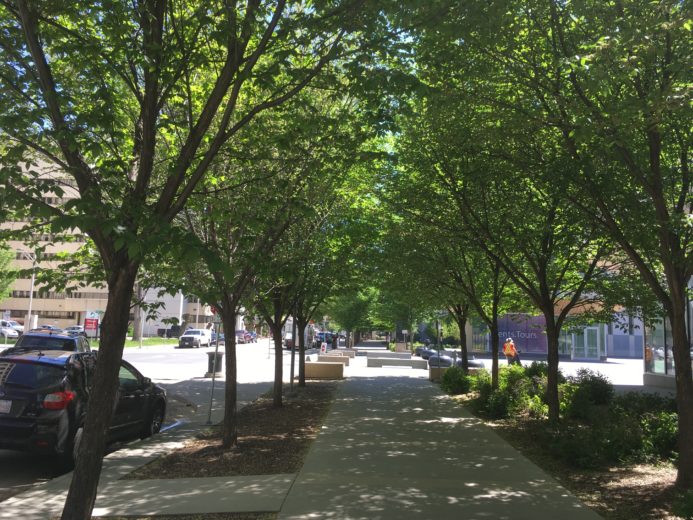 The five-year Edmonton Federal Building renewal project from 2010–2015 included the installation of 3,000 (2X and 3X) DeepRoot Silva Cells supporting the health of 70 trees. As part of the Alberta Legislature grounds overlooking the North Saskatchewan River Valley the Edmonton Federal Building connects to downtown. For over 20 years the Federal Building was unoccupied and lifeless until 2010 when the Province of Alberta put forth a four-point plan proposing investments in the Incorporation of Green Infrastructure and LEED Gold Certification to bring more than 600 employees and the public back to the grounds.

The Federal Building is one of several buildings within the Alberta Legislature grounds. The design team’s intent was to connect the Federal Building to the other surrounding structures centered on the axial alignment of 108 Street (Capital Boulevard) to the dome of the Legislature Building and downtown. Three of the main elements: 99th Ave, the Bowker Building, and the Federal Building were thoughtfully integrated by the plaza and garden’s green and blue infrastructure. This project demanded an extensive team of consultants led by Kasian Architecture with Moriyama and Teshima Architects, Dialog, and Stantec with the support of numerous specialist expertise consultants. Landscape Architects Moriyama and Teshima and Dialog were primarily responsible for the grounds with the direction to create an inviting, enjoyable public realm of major plaza, gardens, and streetscapes with green infrastructure throughout. To reach the Incorporation of Green Infrastructure and LEED Gold Certification goals, the use of DeepRoot Silva Cells were integral to the design. A new pavilion for the Federal Building was created to address and front the plaza. It “complements the scale, design and materials of the Federal Building.” Adjacent to the new pavilion is a grove of 12 trees supported by 104 m3 of soil in Silva Cells. 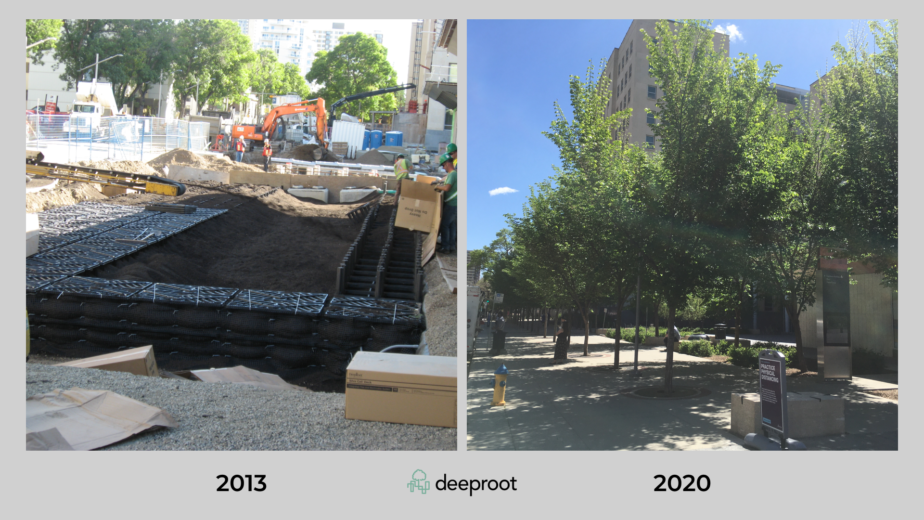 The renovated Art Deco building was integrated with its newly created plaza space and streetscapes with thriving greenery. The Federal Building Capital Plaza extends from 99th Avenue to the existing pools north of the Legislature Building between the Federal Building and the Bowker and Haultain Buildings. 99th Avenue was renewed with 54 trees. A total of 1,104 m3 of soil was provided in 2X Silva Cells to support their healthy growth. In front of the Bowker Building, across from the Federal Building, is a 1,500 m2 garden that evokes all six of Alberta’s eco-zones: Boreal Forest, Rocky Mountains, Foothills, Parkland, Grassland, and Canadian Shield. This area created a forest along the length of the Bowker Building. Wooden and paving stone pathways crisscross the forest creating “nature walks” and quiet space for reflection adjacent the plaza with its water feature attraction. Silva Cells support the wooden walkways while connecting the soil volumes on either side so that the whole area is one continuous soil volume space to support the forest.

According to Dialog Design’s Project Landscape Architect, Doug Carlyle, “The trees on 99th Avenue, in the Plasa and its gardens have been notable in their growth since their installation in 2014. The incorporation of DeepRoot Silva Cells for healthy root systems has facilitated the required soil mix volumes for tree maturity with integrated aeration, water, and drainage. I have been personally struck by their health and vigor over the past several years.” 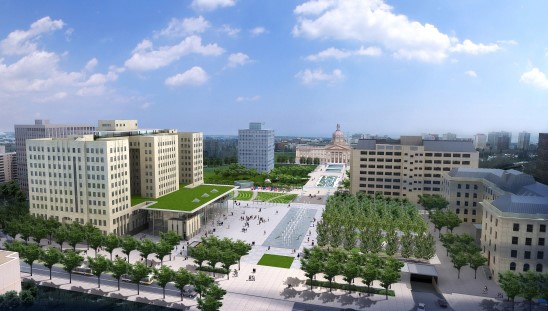 Earning LEED Gold Certification and the Edmonton Urban Design Award in 2015, the Federal Building project is an excellent example of how Architecture and Landscape Architecture can work together in “Place Making,” each complementing the other to create a space that is much more than its component parts.

Today there is a stronger pedestrian link to downtown, the river valley and the extension of the Heritage Trail along 99th Avenue. The new plaza invites a growing number of visitors, downtown employees, and residents to walk, enjoy, and interact with the site’s blue and green amenities and infrastructure. 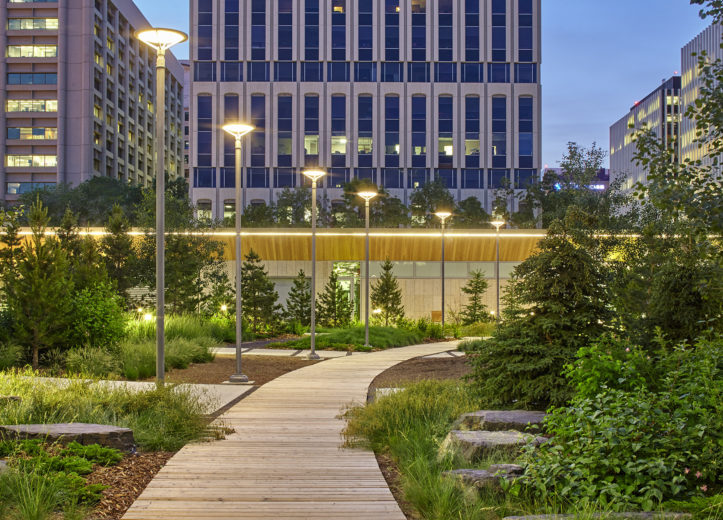