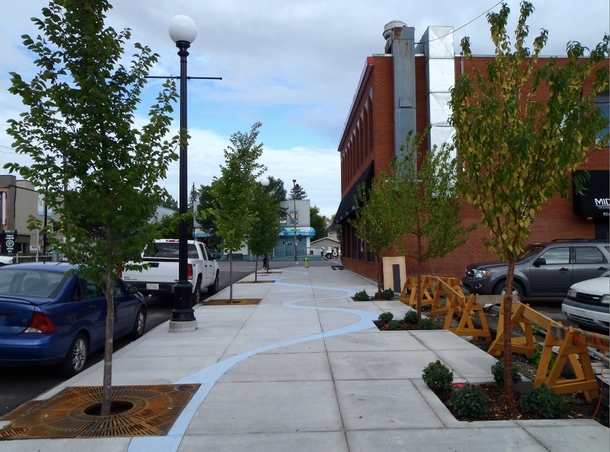 2nd Avenue NW in Calgary, Alberta is a mixed-use street that runs through the Kensington neighborhood of the city. One section across the river from central downtown Calgary, between 10th Street NW and 9th Street NW, has been developed as a model site demonstrating how a dense, commercial street can manage stormwater directly on-site using trees and soil as green infrastructure. This prototype project started as an urban design project focused on walkability issues like expanded sidewalks and lighting and seating components, and has grown into a demonstration project that shows the vast potential for truly green streets throughout the city. 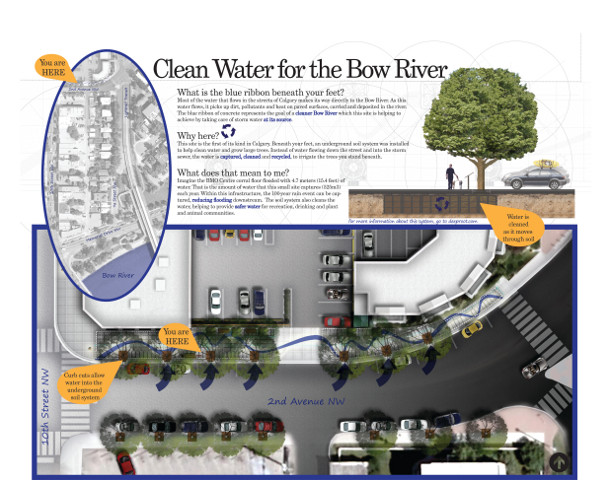 An interpretive sign will explain why this stretch of 2nd Ave NW, in Calgary, is different from surrounding street. Image: The Kestrel Design Group

Although there are stormwater management facilities located throughout Calgary, the community of Kensington has no such facility. Thus, storm runoff flows across city streets, sidewalks, and parking lots, picking up dirt, pollutants, and heat from paved surfaces, and drains directly to the Bow River. Additionally, because the city has no sumps in their catch basins, these pollutants reach the river without any treatment — impairing the quality of this central and iconic body of water.

According to Kenneth Clogg-Wright, a Water Resource Specialist with the City of Calgary, the project’s initial “green” goal was to demonstrate a suspended pavement system in order to enhance street tree health. Shortly after starting the design process, Clogg-Wright observed, “we saw how this system could be used not just for trees, but for water, too. In conjunction with the Parks Business Unit, we converted this to a tree-and-stormwater program.” The project was initially a collaboration between the Parks and the Land Use Planning Business Unit and eventually expanded to include the Roads and Water Services Business Units. Says Greg Stewart, a landscape architect with the city, “we wanted to get all of our heads together and see what ambitious green goals we could accomplish.” 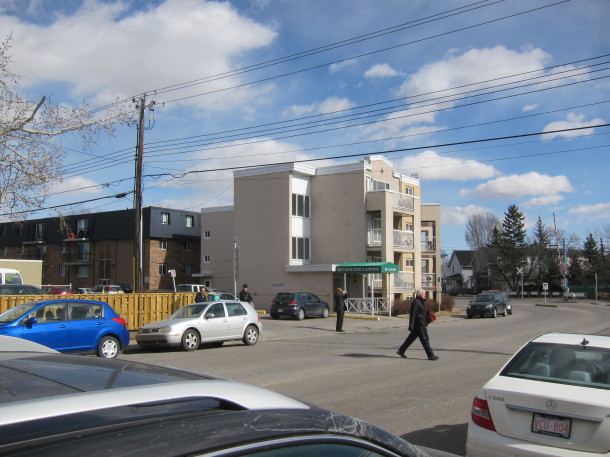 2nd Avenue NW in Calgary, AB prior to the installation of Silva Cells.

This working group from the City of Calgary elected to use the Silva Cells in light of their ability to support pavement, provide increased soil volume, and service stormwater needs. The Kestrel Design Group and Larsen Engineering completed the stormwater design for the site, utilizing the Silva Cell system to contain vast amounts of soil underneath the sidewalk paving. The soil in the Silva Cells provides the seven street trees with about 671 cubic feet (19 cubic meters) per tree and enables them to support healthy, large canopies and to flourish for decades.

By using a specially-blended bioretention mix, the soil also acts as an on-site stormwater management system, providing source control for the stormwater that flows off the road and sidewalk. Curb cuts provide an access point for water to enter the system after which it is distributed through the soil in the Silva Cells through an elaborate piping system. Conservatively, the site is designed for the soil to hold a total of 940 cubic feet (nearly 26 cubic meters) of water with 5.5 m3 being captured at each curb cut.

In addition to managing the rate and volume of stormwater (Peak Flow Reduction), the soil also tackles the water quality, acting as a filter to remove Total Suspended Solids (TSS) and other pollutants such as Nitrogen and Phosphorus before discharging the clean water through a drain line to a downstream catch basin and eventually the river. 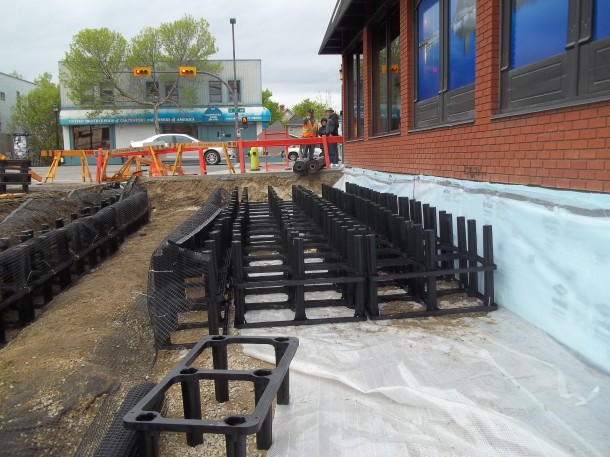 Silva Cells were installed in a two-layer system along 2nd Avenue NW. 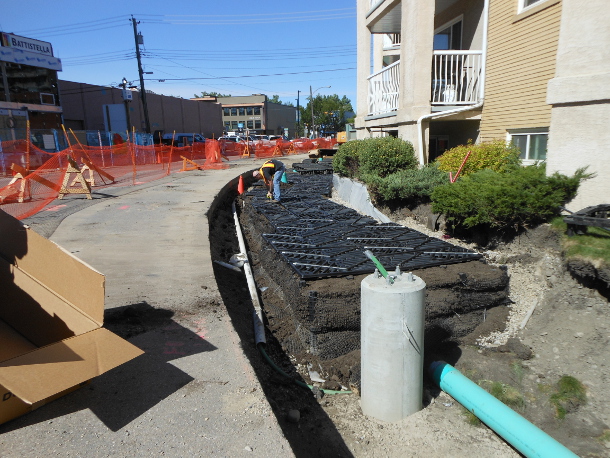 One stretch of the installation involved a gentle curve. Image: Ken Clogg-Wright.

A total of 270 decks and 540 frames were installed in a two-layer system that will enable this small stretch of downtown Calgary will to manage its annual rainfall as well as a 100-year storm event, thereby reducing flooding, pollution, and potential damage downstream. The Silva Cell system also enables site runoff to be used to irrigate the trees rather than potable water. As the street trees mature and grow, the canopy interception and evapotranspiration capacity of the trees increases the efficiency of the system’s stormwater treatment capacity by up to 25 percent. 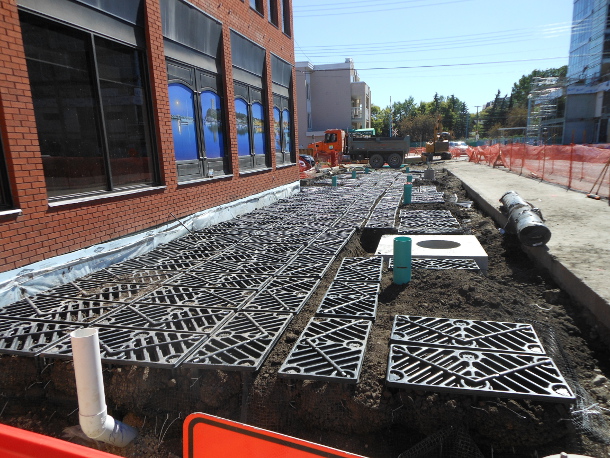 Another stretch of the installation was a straightaway. Image: Ken Clogg-Wright.

And the innovation doesn’t stop below the surface of the site: Contemporary detailing and high quality concrete paving updates the streetscape, providing a stepping stone for design improvements for future projects in the city. A blue ribbon of decorative concrete stretches the site, hinting at the water that is being captured and treated just below the surface. At street level, an interpretive placard provides information regarding the site, placing it in the context of the larger urban ecosystem. 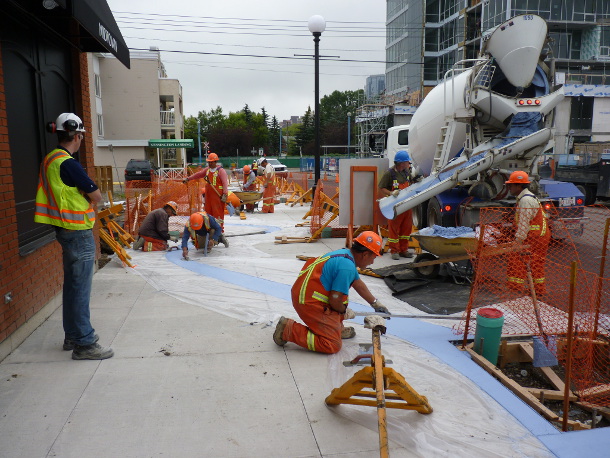 Additionally, separate funding has been allocated to monitor the site’s performance. Clogg-Wright explained that the city plans to measure the volume removal, rate reduction, and stormwater chemistry (pollutant loading). Monitoring is expected to last for two to three years and findings will be used to help guide and adapt stormwater policies for Calgary in the future. 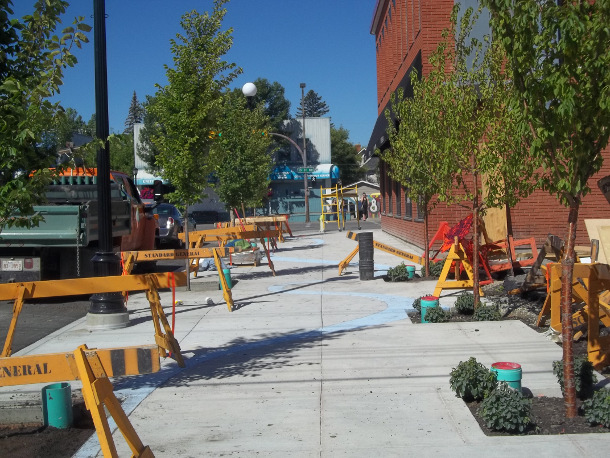 2nd Avenue NW in Calgary with the trees installed (August 2013).

Calgary is currently developing their first set of Green Development standards, which will include green infrastructure techniques such as suspended pavement in the “toolkit” of options for designers and developers. Greg Stewart believes that the 2nd Avenue demonstration site will help with future green development in the city: “It always helps to have a site in the ground that you can point to and say, ‘See, it can be built. It can be approved. It can be beautiful. Things are changing in the city. We’re poised to do a lot more in the future.”

An article about this project was published in the Spring Issue of Government Buyer Magazine (login required).