Over the past century, Miami Beach’s famous Lincoln Road has seen many significant changes. Historic redesigns of this iconic South Beach promenade have run the gamut from tropical to urban to a complement of the two. In 2010, DeepRoot’s Silva Cell was a key part of the successful green infrastructure redesign of the mixed-use extension of the 1100 block between Alton Road and Lenox Avenue. The centerpieces of the redesign are 12 trees: six Bald Cypress (Taxodium Distichum), five Live Oak (Quercus Virginiana), and one Kapok Ceiba (Pentranda) that thrive between Alton and Lincoln. All 12 are supported with 400 ft 3 of soil volume and a total of 860 Silva Cells. The Silva Cells will ensure another century of vibrancy for Lincoln Road’s trees and walkway.

Before the 1920s automobile era, Lincoln Road wasn’t a road but a tropical maritime forest. Today, the act of clearing natural habitat to make way for a road is controversial, but in 1913, Carl Fisher, an automobile and highway visionary who was considered a pioneer for such modernizing acts. A defining moment for this space was in 1920 when Lincoln Road was first paved. Over the next 30 years, the road would serve as the main thoroughfare for vehicles, surrounded by a mall of shops and restaurants for locals and tourists, accessible by foot and car. In 1960, Lincoln Road was declared the first outdoor mall in America. Embracing this title, streetcars were adopted, cars were removed from the design and there was a pedestrian-oriented aesthetic from the 1960s through the 1980s. The outdoor mall was a magnet for sun worshipers and Miamians alike—especially when architect Morris Lapidus created the now-iconic shapes and plantings along the seven-block stretch between Washington Avenue and Lenox. In the 1980s, the concept of removing all vehicles and creating a pedestrian-only walkway evolved. In the 1990s, Lincoln Road embraced al fresco dining and transformed the mall into a walkway for accessing iconic restaurants and providing shelter from the beaches and sun. 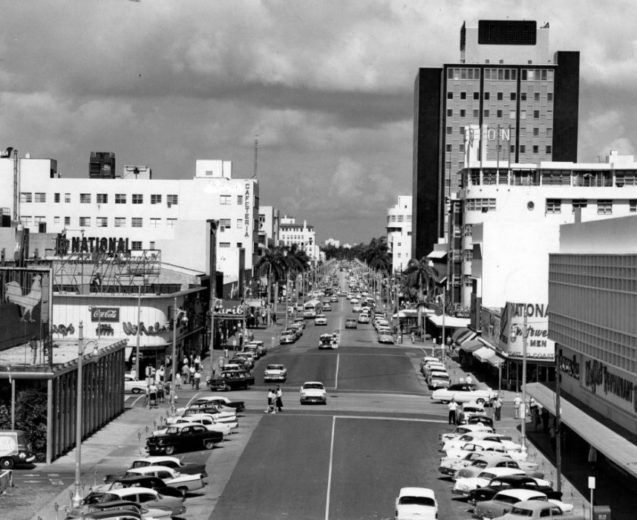 Lincoln Road in the 1950s. The Road was paved and focused on vehicle traffic not pedestrian traffic. Photo credit, Miami Herald 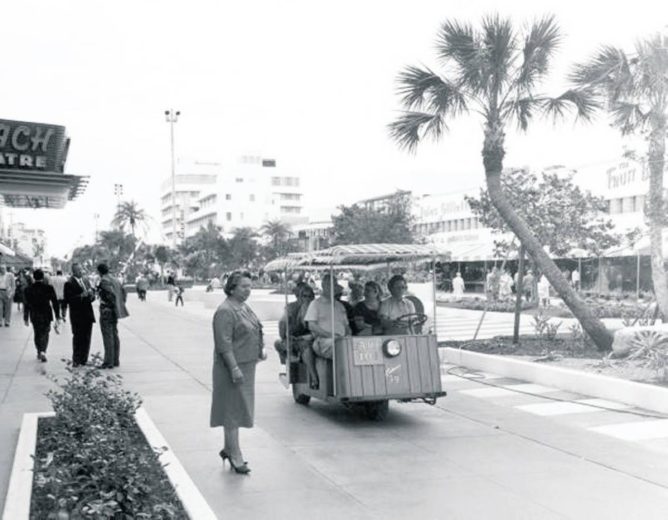 The Design Concept: Bring The Tropical Maritime Forest Back

By 2009, the iconic road turned walkway was due for another redesign. Raymond Jungles Inc. wanted to strike a balance of modernization while preserving the functional elements of the pedestrian-focused design. 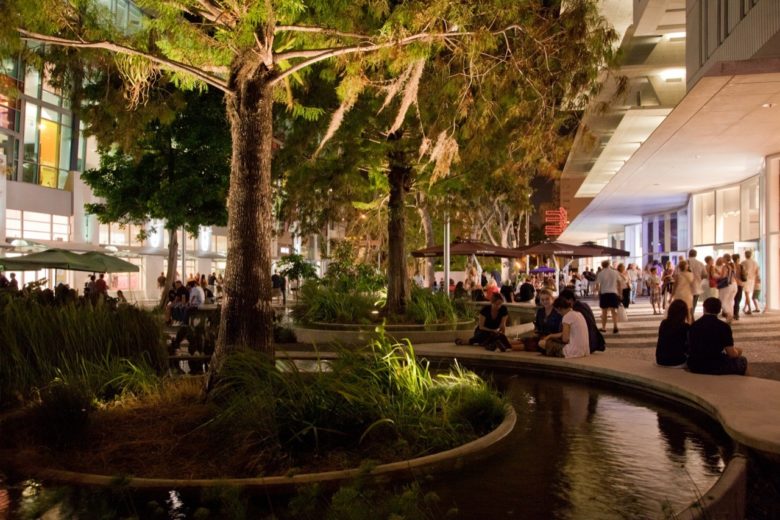 2 Bald Cypress surrounded by evening activity at Lincoln Road Mall in the evening, a year after renovation was complete. Photo courtesy of Raymond Jungles Inc. Photo taken in 2010.

As envisioned by the developer, Robert Wennett and actualized by Swiss architects Herzog & de Meuron and landscape architect Raymond Jungles Inc., the new project would make use of the site to reinvent the idea of tropical modernism in keeping with events such as Art Basel Miami Beach and buildings by renowned architects that make up the vibrant cultural scene of the city.

“The design for 1111 Lincoln Road bridges the urban dweller with nature, affording vantage points and multi-functional areas for the users of this foremost pedestrian mall in Florida. The roadway turned greenway and waterway is an Everglades-inspired aquatic-infused environment where specimen Cypress trees anchor the “urban glade” within the pedestrian plaza. The re-pedestrianized block of Lincoln Road has created an unparalleled variant of civic space in Miami Beach.” -Raymond Jungles Inc.

Raymond Jungles balanced space capabilities to create a multifunctional event space that continues to flourish 10 years after the update.

Many of the original Morris Lapidus tropical architectural treatments were the inspiration for the reinterpretation. The new pedestrian mall is studded with water gardens, planting areas, and varying-width stripes of Portuguese black and white mosaic that act to tie the original mall to the extension. The treatments for each large native Florida tree included openings with rain gardens, a mangrove habitat, and plenty of healthy, biologically active tree soil. James Urban, FASLA, worked with Raymond Jungles as a consultant on the site design for the large-specimen trees, recommending Silva Cells as the best way to efficiently place large quantities of planting soil the trees would need beneath the planned gardens. 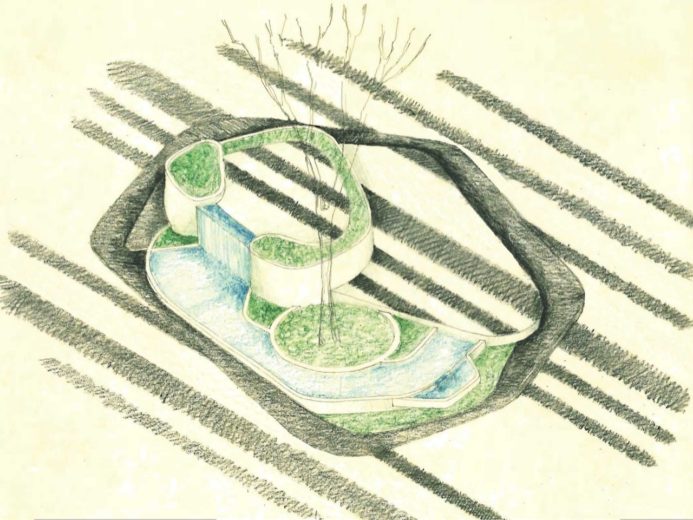 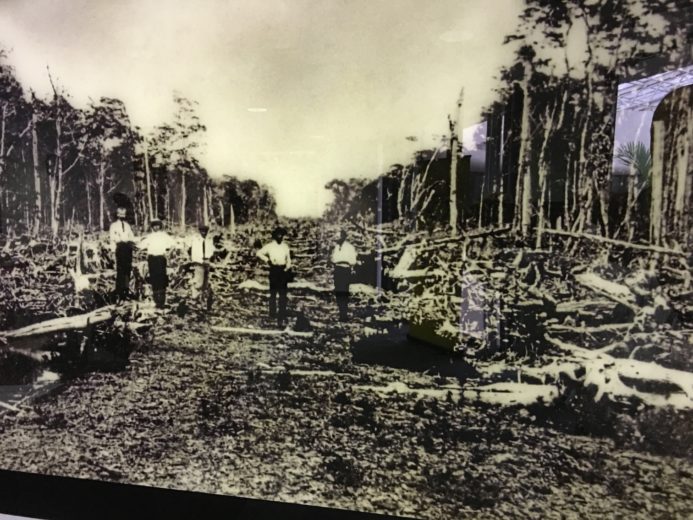 Lincoln Road shortly after reopening in 2010. The trees are supported with temporary tree braces. A great example of trees, people, and public spaces all thriving together

How And Why Was Silva Cell Incorporated? 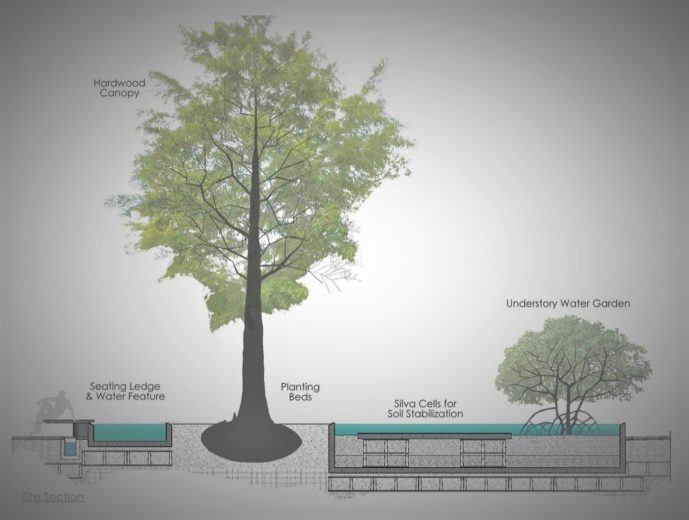 This project is a great example of nonstandard Silva Cell applications. While the Silva Cells are designed to meet AASHTO H-20 loading, this installation dictated that they support concrete rain gardens and containers of extremely hydric soils appropriate for recreating the local intracoastal habitat and the mangrove planting in an urban setting. Contractor GT McDonald installed the Silva Cells. Some cells went in below the water table after determining that, with strict dewatering protocols and proper aggregate placement, it would not affect the structure of the water gardens. 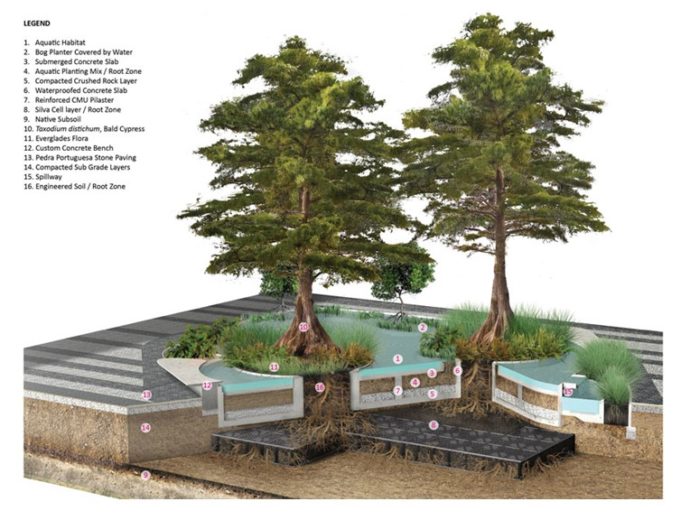 The salinity of the surrounding soil was tested during construction and it was found that the fresh water on the site combined with the saltwater to create a brackish mix to which the 24 feet. The surface parking lot to the north of the pedestrian mall behind 1111 Lincoln Road also received Silva Cells to support large tree growth in an application that also featured angled parking and lots of native vegetation. Silva Cell was a vital piece in the redevelopment puzzle in Lincoln Road’s 2010 transformation. 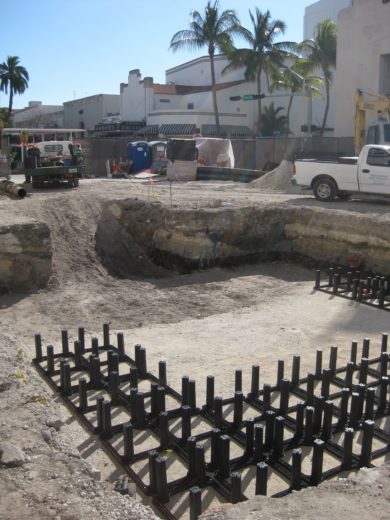 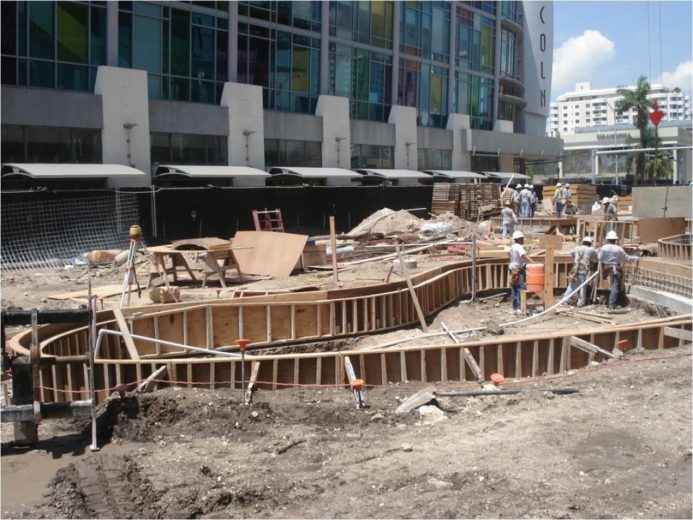 Construction of the aquatic habitat, 2009.

The renovation results are stunning. Large, native, live oak, kapok, and bald cypress rise majestically above the pedestrian mall, their shady native ecosystems offering an urban respite from the hot sun. The project won multiple awards in the years after its completion.

Along with its international reputation for design, art, food, and culture, Miami Beach has displayed a commitment to the importance of soils, trees, and shading, and championed the continued implementation of Silva Cells throughout the city. It has enthusiastically integrated large trees as a backdrop to the energetic urban scape. Silva cells have been installed at the Mount Sinai Medical Center, Crescent Heights, and the Miami Beach Convention Center. These and at least two dozen other projects have enhanced livability and enjoyment in the city for residents and tourists.

DeepRoot is thrilled to be part of this new chapter of the Lincoln Road mall history book. 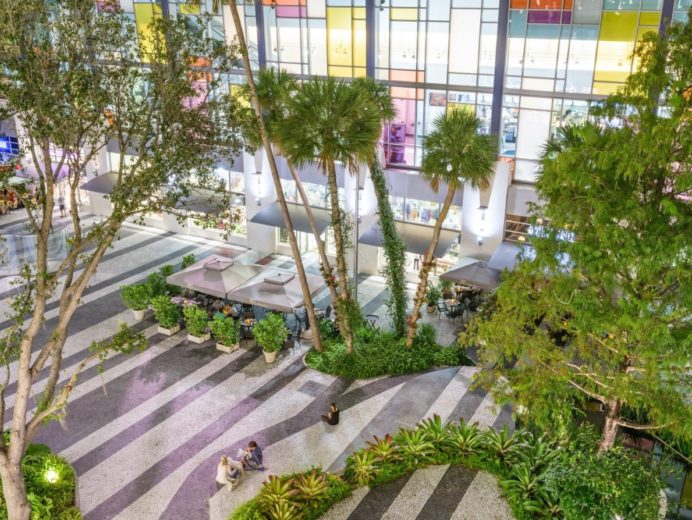 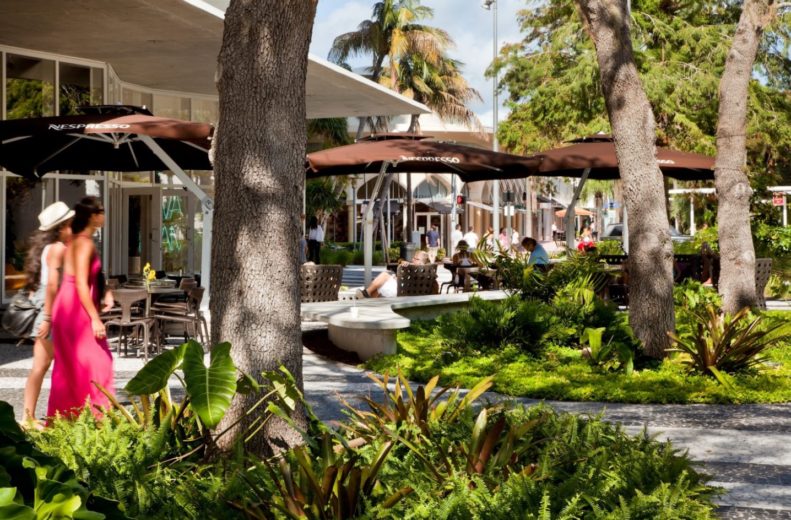 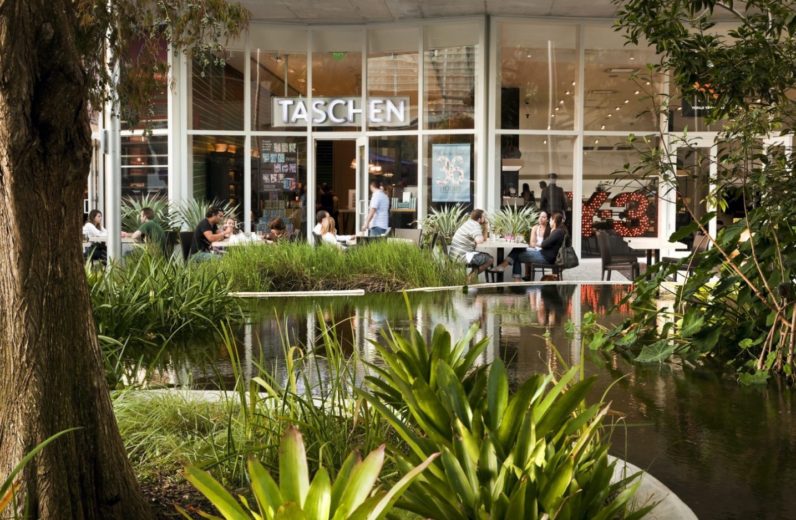 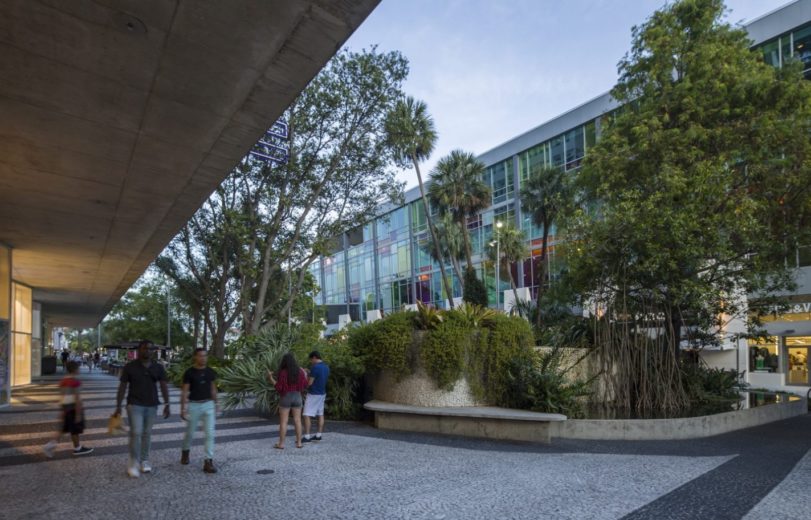 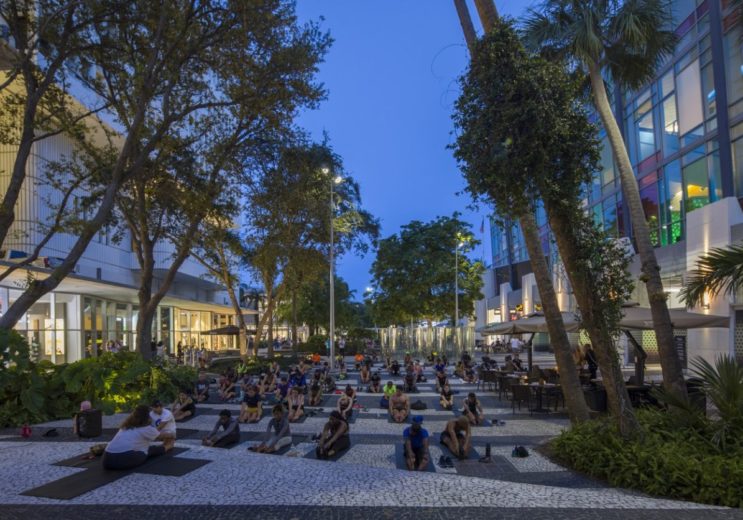 Photo courtesy of Raymond Jungles Inc. A Yoga class in the multiuse mix space below the Live Oaks and Sabal Palms.