Today’s guest post is from international tree consultant Jeremy Barrell, arborist and principal at Barrell Tree Care. You can see more photos of the Bomber Command Memorial Silva Cell installation on our Facebook page, or download the case study.

A Memorial in London’s Green Park to honour the 55,573 men of Bomber Command who lost their lives in World War II is now under construction and is due to be completed in time for a dedication and unveiling on Thursday, 28th June 2012.  The Monument, designed by Liam O’Connor Architects & Planning Consultants, who also designed the highly acclaimed Armed Forces Memorial at the National Memorial Arboretum, consists of a stunning white Portland Stone building housing a 2m high bronze sculpture of a bomber crew looking up to the sky. 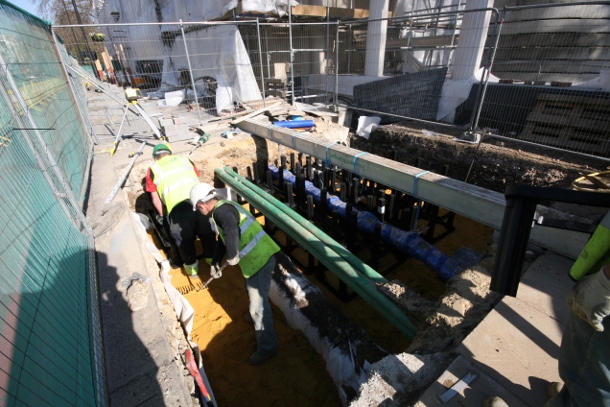 A variety of service runs below the pavement is a common feature of most streets, which can seriously restrict the potential rooting volume for new trees. The Silva Cells can be manipulated around existing services making them ideal for planting new trees in restricted spaces.

As the Memorial nears completion, the substantial new landscaping to match the green fringe of Green Park has started with the planting of two magnificent 9m tall semi-mature London plane trees framing the facade onto Piccadilly. I was retained to manage the tree issues, which included this complex installation of new trees on this famous central London street.

When granting planning permission, Westminster City Council insisted that two new large trees were planted on the Piccadilly frontage to ensure the Memorial complemented the adjacent Green Park and made a positive contribution to buffering the impacts of climate change.  Trees in busy streets offer multiple benefits, including providing shade for pedestrians and creating a very pleasing green contrast to highly urbanised neighbourhoods.  However, the technical challenges of successfully establishing large trees in such hostile conditions were considerable, primarily because of the very poor soil beneath the pavement and the multitude of services restricting the space for roots.  Trees planted in a conventional way would simply not survive, so some careful planning was required. 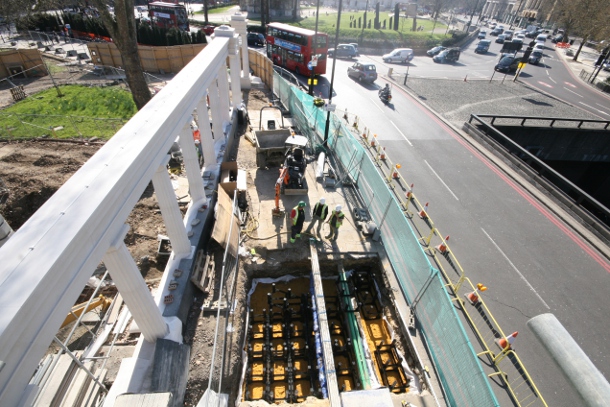 An aerial view shows the Silva Cell installation abutting the soil within Green Park that will provide the future rooting volume necessary to ensure the trees retain the potential to survive and thrive for hundreds of years.

In order to ensure that the new trees provided an instant impact, they had to be big, but they also had to be sustainable well into the future, with a life expectancy of hundreds of years to act as living link for future generations to the original Monument construction.  The design team decided that the long term expectation for this project in such difficult conditions had the best chances of success if it included the following elements:

Species:  London plane was chosen because it is an iconic street tree with a great track record of coping with the toughest of rooting conditions.  Such a robust species would maximise the chances of long term survival and be in keeping with local character. 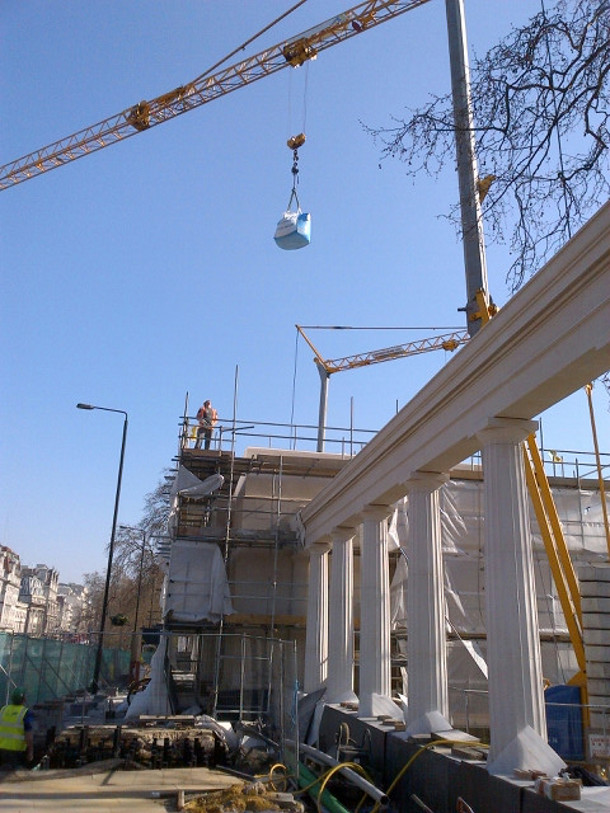 Soil replacement:  The soil beneath London streets is so compacted and inhospitable to healthy root growth that large new trees would find it very difficult to live and flourish beyond the short term without some help to get established.  The Silva Cell is a tried and tested product offering the ability to provide new and fertile soil beneath the pavement within a supporting framework for the pedestrians and traffic above.  Each new tree had about 15 cubic metres of new good quality soil, which will provide the initial boost necessary for the first 10 years of healthy growth and allow the roots to gradually explore the more limited resources beyond this nursery pit. 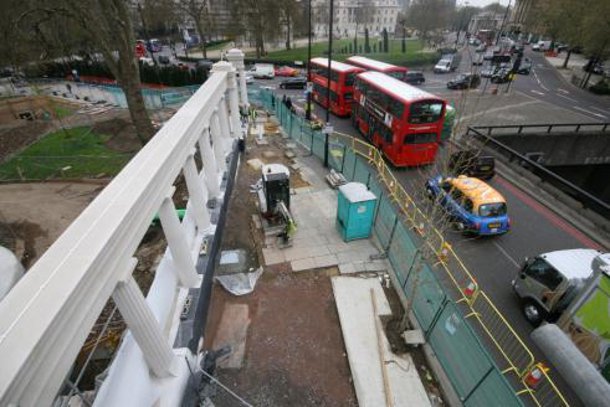 Aerial view with the Silva Cells installed and covered ready for the final pavement resurfacing, with the new tree in place against the road edge.

Long term survival:  Plane were chosen because they have the potential to reach a mature presence of 20–30m in both height and width, but to do this their roots will need access to much more soil than the present planting pits provide.  The potential for rooting beneath the pavement is limited because of the multiple services below the ground which occupy space, obstruct roots and need to be accessed from time to time for maintenance.  The Silva Cells allow existing services to remain in place by threading them through the framework, but they will not ultimately provide enough rooting volume for the trees to reach their maximum size potential.  This potential barrier to maximising their growth potential was overcome by configuring the installation below the ground so that it abutted directly to the soil within Green Park, providing a future route for roots into the parkland.  These direct links to better rooting conditions will provide the trees with all the soil they need to survive for hundreds of years.

This unique project is of immense psychological importance to the few remaining veterans from Bomber Command and will remain a fitting tribute to those who lost their lives.  It is also one of the highest profile projects in London demonstrating that big trees can be sustainably installed into dense urban development.  This Memorial is proving by example that climate adaptation through the planting of trees is both feasible and happening where it will make the most difference – right in the heart of our biggest cities. 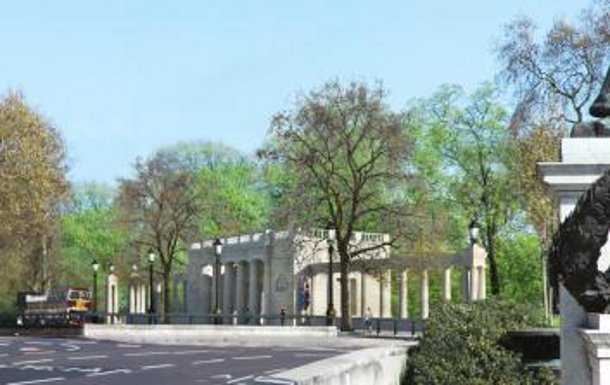 Impression of the Piccadilly façade of the Monument when the two plane trees have matured.