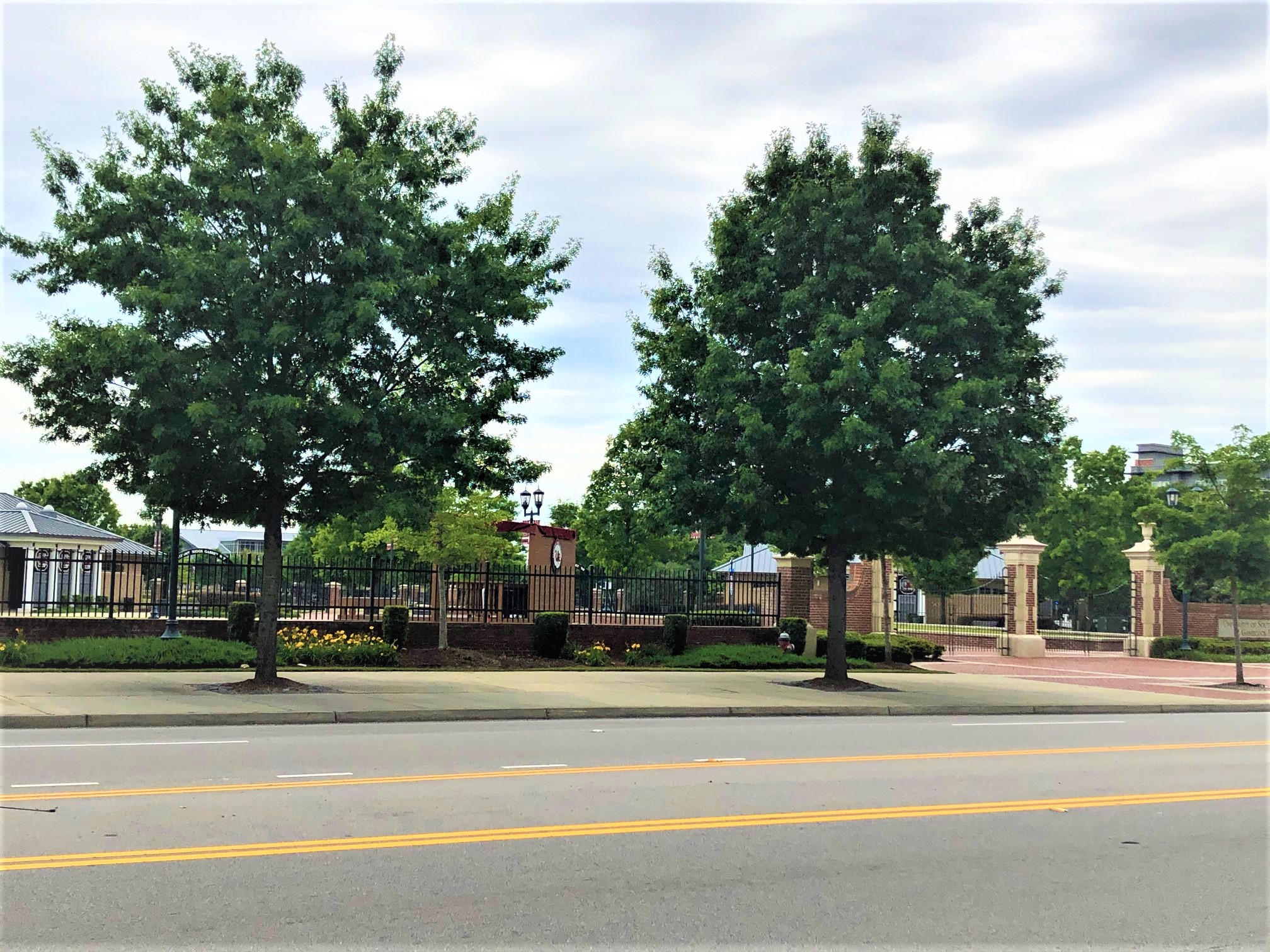 – USC Gamecock Park and Williams-Brice Stadium were revamped with green infrastructure in 2012.

The University of South Carolina seriously upped its tailgating game in 2012. For the first decade of the new millennium, Gamecocks fans turned the parking lot opposite Williams-Brice Stadium into an adult playground on game days. The parking lot once hosted the state farmers’ market, but the fans so successfully commandeered the space that the decision was made to turn it into an elevated tailgating venue. Designers Wood + Partners Inc. conceptualized incorporating a parking lot within a park. Its successful state-of-the-art design includes tent zones, cable TV hookups, and restrooms, interspersed with attractive landscaping. Surrounding the park, encompassing four city blocks, are 20 Scarlet Oaks (Quercus coccinea). The Scarlet Oaks were intentionally selected to match UofSC team colors — the leaves change to a gorgeous garnet shade in the fall during game season. The marching band and football team march through the park on the way to the 80,000-seat stadium. Today, Gamecock Park is a multiuse space catering to football fans, concerts, festivals, and more. 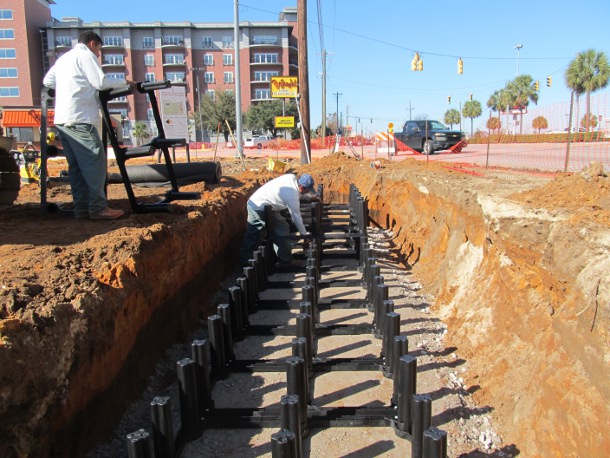 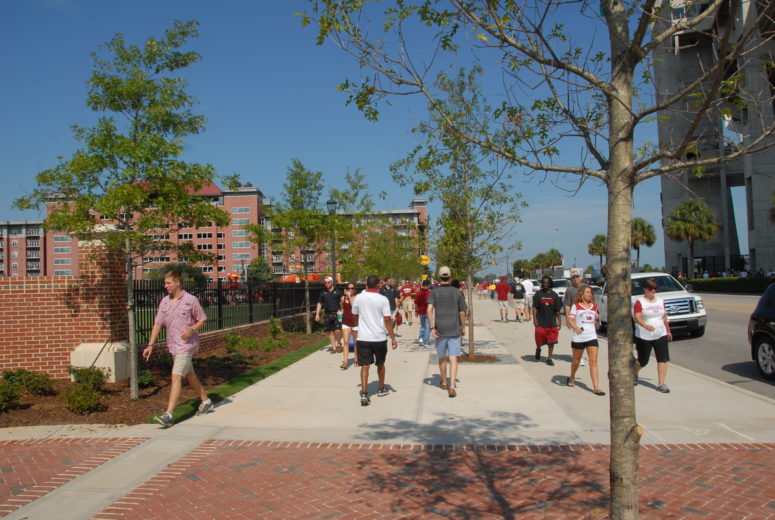 One year after installation, 2013 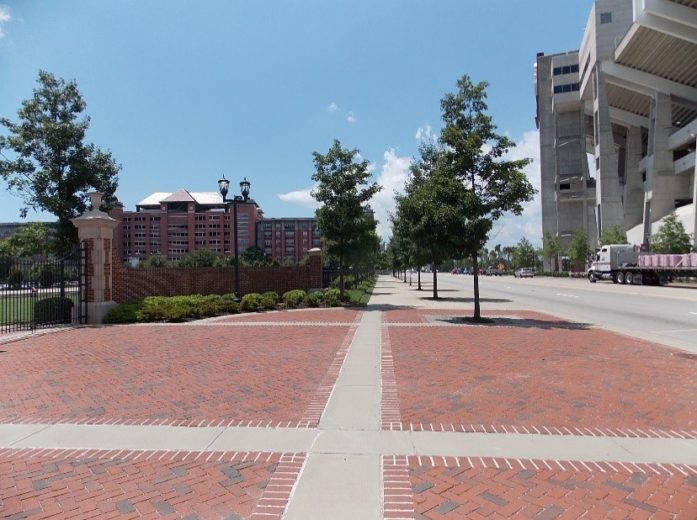 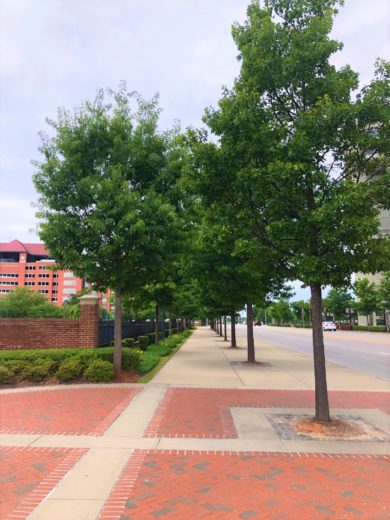 “The Silva Cell system has been used at Gamecock Park as well as several other sites on the UofSC campus since 2013. The system enhances the campus’ urban tree cover, and helps USC meet local requirements for tree planting in areas requiring extensive hardscapes.”
– Emily Jones, Project Manager/Landscape Architect of USC

Two years after the completion of Gamecock Park, in 2015, 30 trees were added along the sidewalk on the stadium side of Bluff Road, totaling 50 trees with the combination of the two projects. Wood + Partners would also be the landscape designer, choosing the same Scarlet Oaks. Today the trees are thriving with the ample soil volume and support of Silva Cells. Silva Cells can be directly linked with the success and popularity of Gamecock Park, as the cells promote the long lives and vitality of the trees that provide shade and cooling for the fans and patrons. 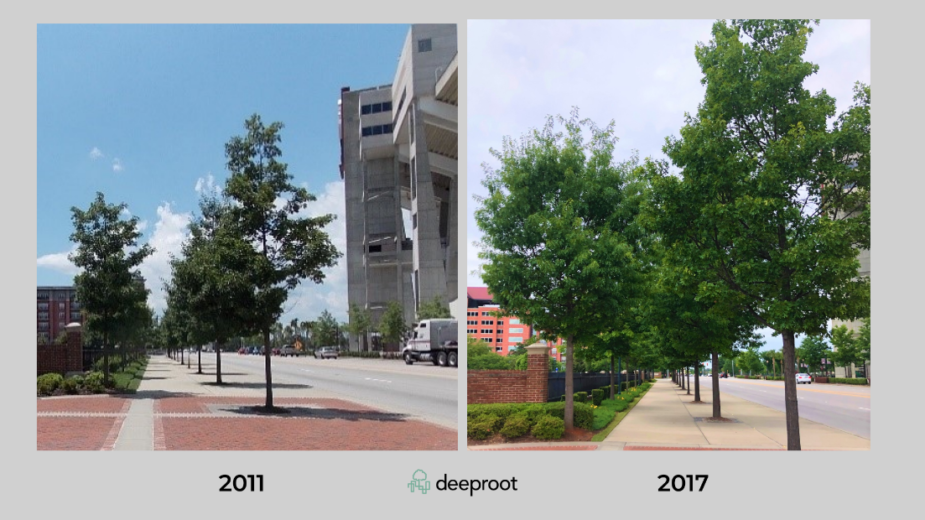 Nine months out of the year, the temperature in Columbia, South Carolina, averages about 70 degrees. Three of those months average in the 90s and above. Mitigating heat island effect is crucial to human and environmental health, especially as we see new record heat waves every year. It takes big trees to create big shade to have a noticeable effect. The EPA reports that shaded tree areas can be between 20 and 45 degrees cooler than non-shady spots. When the average daily temperature during game season is in the 80s, heat mitigation can make or break the tailgating experience.

In 2020, a large part of the success of Gamecock Park as a gathering place is the result of the effective cooling measures made possible through the teamwork of the green infrastructure landscape designers and contractors, and the installation of Silva Cells. The trees have done so well because Silva Cells allow for the healthy root growth and appropriate amounts of soil volume the trees need to reach their full potential and benefit the biosphere.

The former asphalt-covered lot has been renovated into a sustainable, safe, and attractive space for fans and neighborhood residents in a shining example of environmental stewardship. 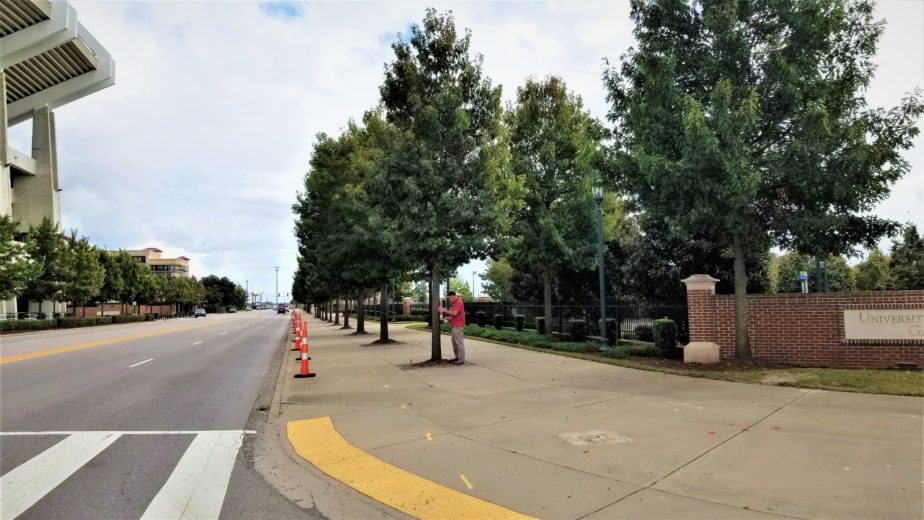 Photo of both sides of Bluff Road, measuring tree caliper and DBH in 2020

When the Scarlet Oaks at Gamecock Park were planted, they averaged a 4” caliper in 2012. Today the range is from 7” to 13”, with an average DBH of 9.3.” With the trees now at a more mature stage, they capture up to 9/10th” (23mm) of rain water in their canopies before any water penetrates.  This is water that doesn’t ever hit the ground and therefore does not require storage or treatment down the road. 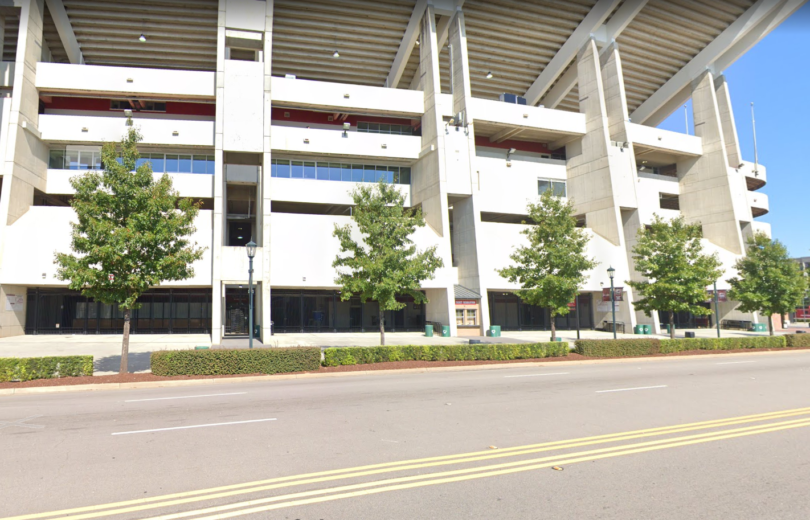 Five of the 30 trees installed with the support of Silva Cell below ground, in 2015. This is on the north side of Bluff Road along Williams-Brice Stadium. 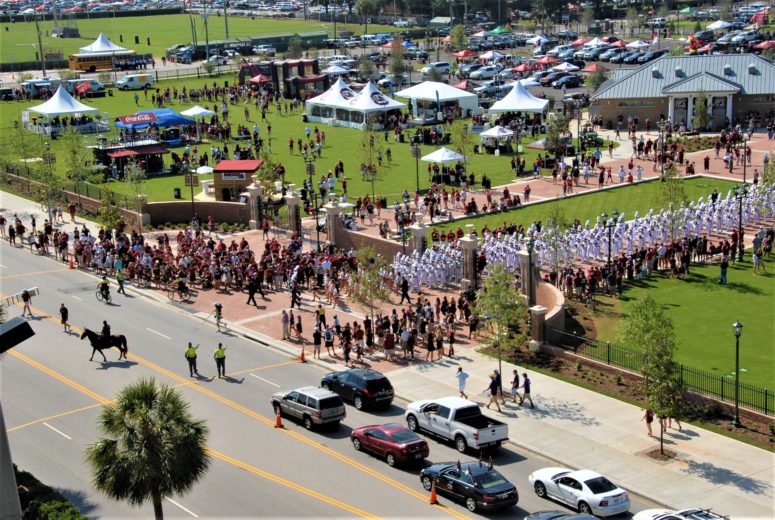 The project is currently being submitted for an ASLA project consideration.
The sustainable design elements paved the way for the following awards: 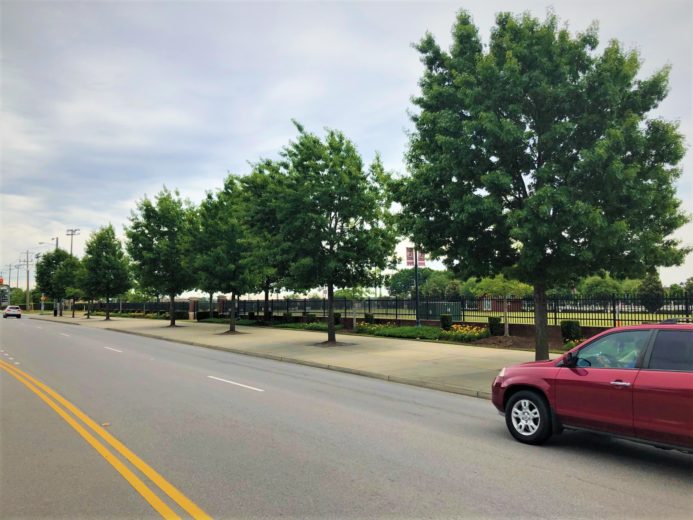