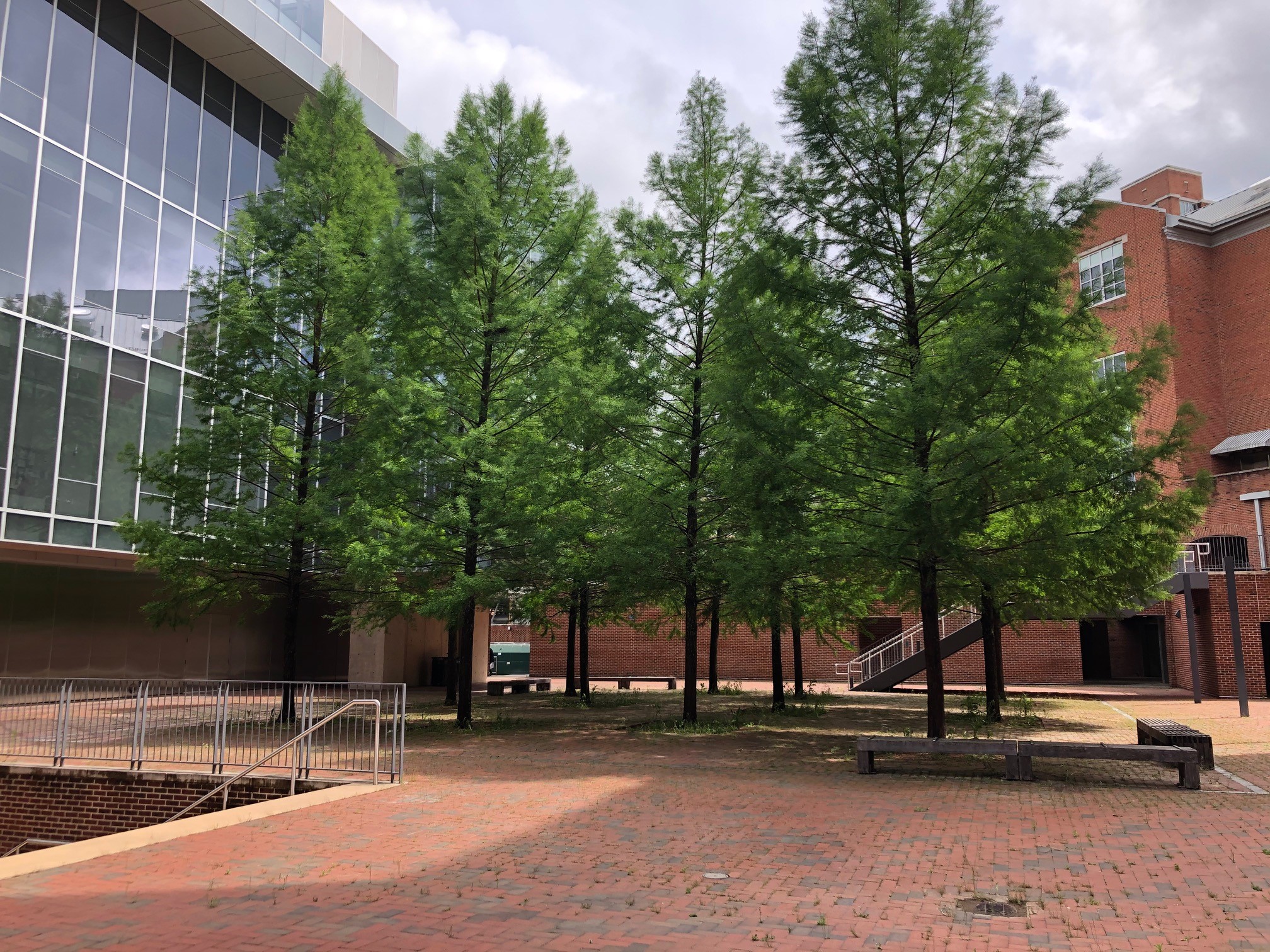 When the University of North Carolina (UNC) set about constructing a showpiece science building designed to offer space for world-class research, it seemed only fitting that both the interior and exterior would rise to the highest sustainable standards both architecturally and environmentally.

In 2010, University of North Carolina (UNC), Chapel Hill embarked down a sustainable green infrastructure path, renovating and updating a portion of both the campus-built environment and the natural environment. The Genome Sciences Building was constructed with the environment at the core of its planning, procurement, and design, earning a LEED Gold certification. Outside of the building, sustainability and regeneration were the key themes in the redesigned plaza space. 12 bald cypress trees were planted into 8,400 ft3 of soil volume and supported for over a decade by Silva Cells.

The trees in the plaza space were dubbed the “central park” by designers, Hoerr Schaudt. The trees replaced an existing parking lot with a sloped open space and helped seamlessly integrate the new Genome Sciences complex into the campus. The park connects the north campus and the medical school and provides attractive pedestrian access. Granite retaining walls and a water feature make a welcoming, appealing space for large and small gatherings, such as those before and after football games held at nearby Kenan Memorial Stadium.

The trees incredible growth serves as an oasis of greenery among the built infrastructure and have certainly expanded into an abundant canopy that will benefit generations of students and alumni. 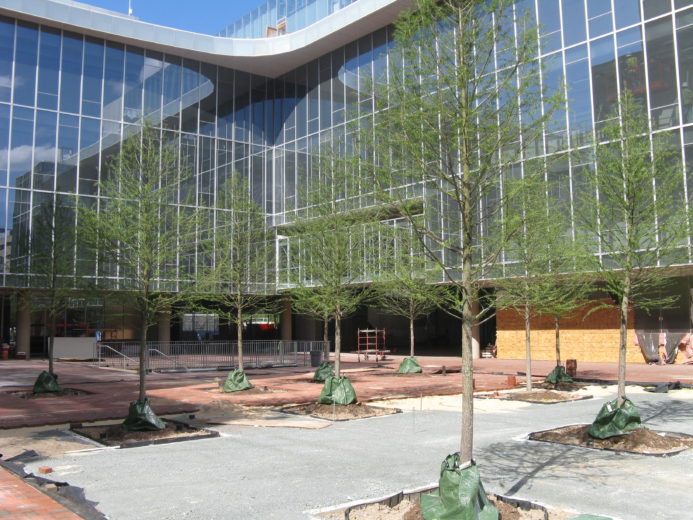 The early days of the Bald Cypress trees in the new Genome Science plaza. Photo taken in 2012

Below the trees and stone seats are 750 2x Silva Cells that have ample soil volume, exactly 700 ft3 each. The designers wanted the young, new trees to grow to similar sizes over the decades, therefore consistent amounts of shared soil volumes were implemented.

Today, students, faculty, and nonhuman species such as insects and birds gather around the trees as a place to take a break, meditate, ponder, and possibly even build a nest. The benefits have been realized thanks to the rapid and healthy growth, creating a small forest, conducive to mindfulness 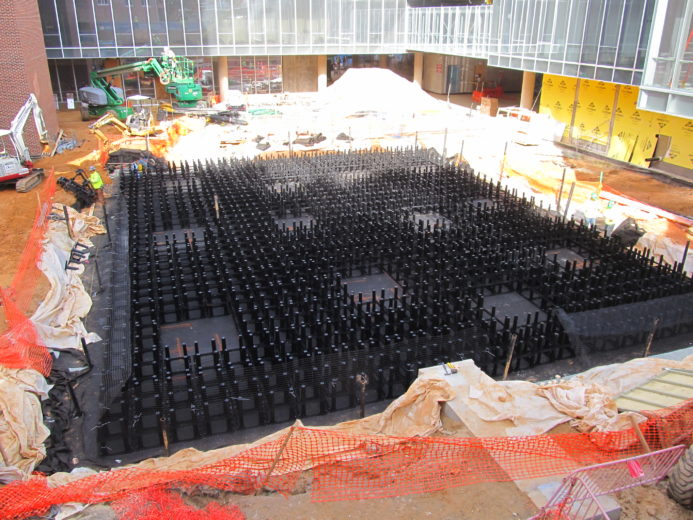 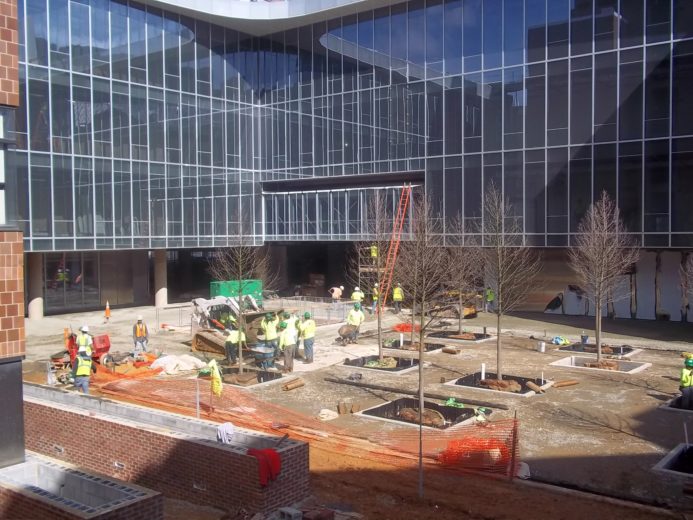 The environmental ethics of the campus landscape standards are hard to ignore. One of the focal points of this parklike space is the 12 bald cypress trees that provide cooling shade. The bald cypress was chosen because it is an underutilized native tree, and UNC landscape standards aim to use native plants where and whenever possible. The trees came from Select Trees, a nursery in Athens, GA. Every effort was made to ensure the trees would grow to benefit many generations to come and complement the state-of-the art structure. Select Trees also monitored the tree trunk diameter in 2014 and 2016. The results were a 5.5” diameter in 2014, and in 2016 six years after they were installed was a 7” trunk diameter. The latest update measurements from Select trees show a 9.5″ diameter, recorded in 2019.

ColeJenest & Stone, the Landscape Architect on the project recently commented on the trees and the role Silva Cells have played in their success.

“Typically, we want large planters for trees installed in an enclosed courtyard to ensure the long-term health of the trees.  Fortunately, the Silva Cell system allowed us to maximize the usable area in the courtyard and still provide ample uncompacted soil for the plants. Even knowing the benefits of the system ahead of time, it has been a pleasant surprise to see how the trees have managed to double in size, especially after such a relatively short period of time.”

Over the past eight years, the trees have nearly grown to the height of the Genome Science Building. See the comparison of the same location from 2014 to 2020 below. 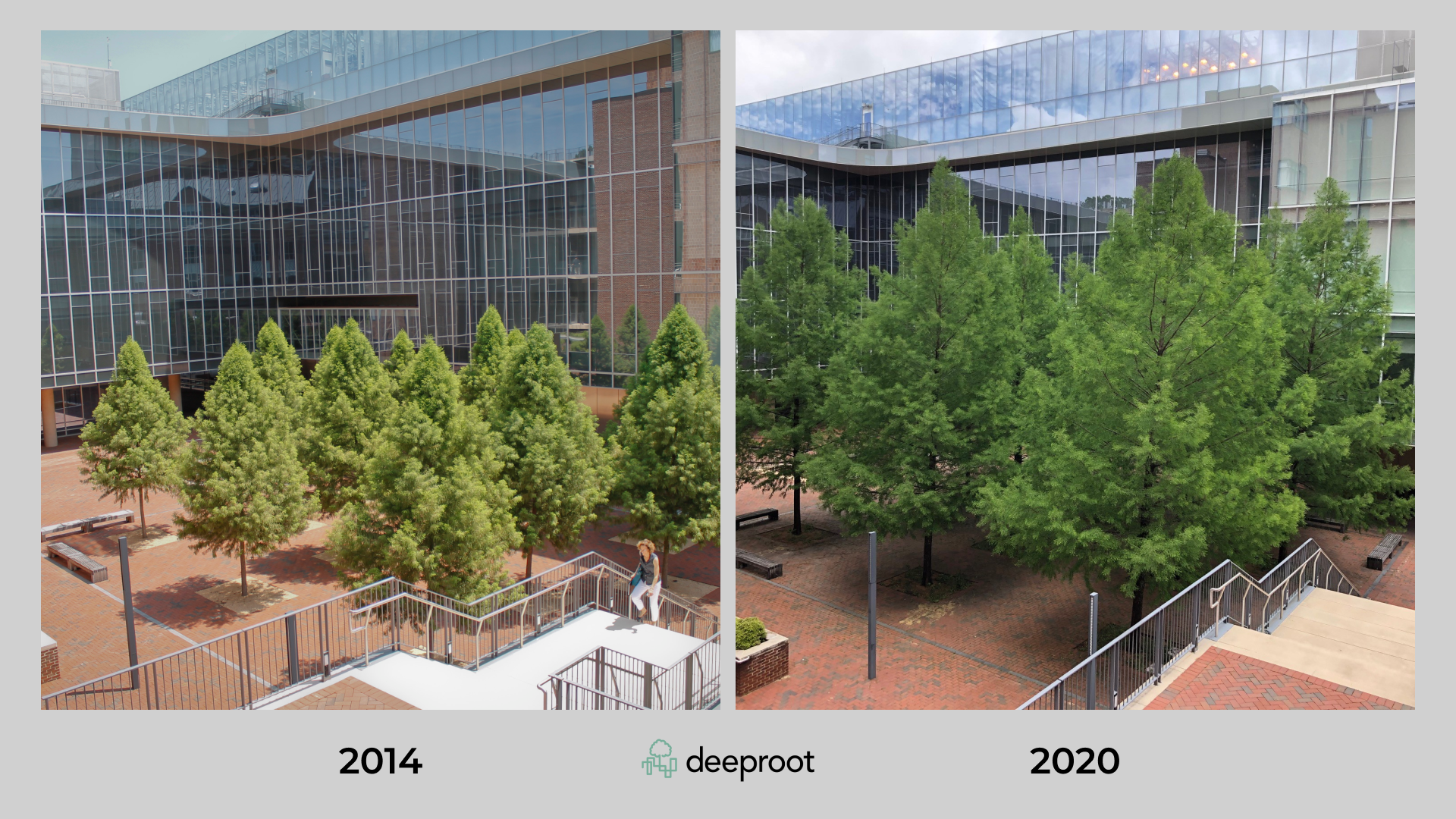 Silva Cells continue to provide key support for the environment, faculty, and students of a premier academic institution This was the first Silva Cell project at UNC, and all eyes were on it. Since the success of Genome Science plaza, there have been two additional green infrastructure projects within the campus that used Silva Cell. We look forward to working to supporting the growth of more green infrastructure to UNC throughout the next decade.