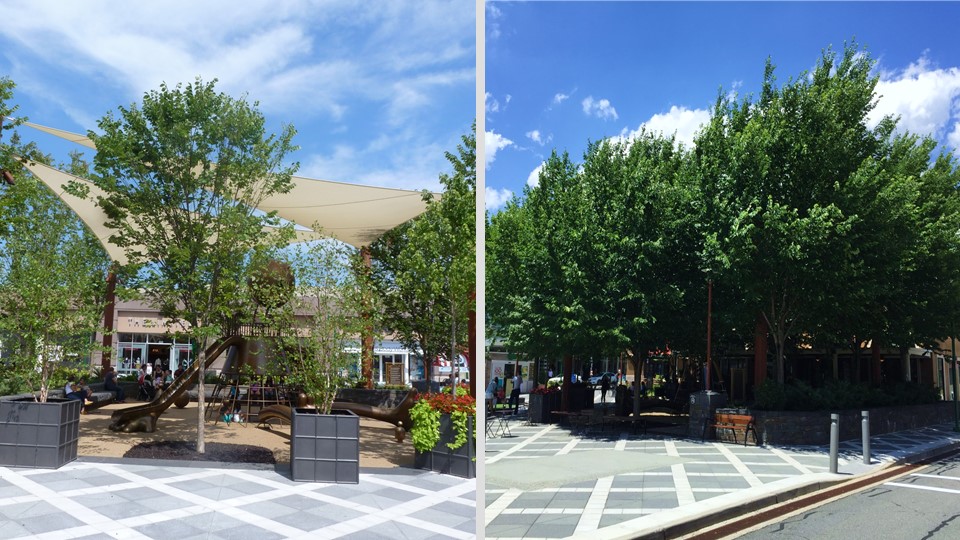 – Trees as infrastructure create a perimeter of shade from a huge canopy of trees, supported by Silva Cells.

–  647ft3 (128m3) of soil volume per tree in 145 Silva Cells support the seven trees throughout the past decade in the urban park. The results are eye-catching.

In 2011, Ridge Hill – a mixed-used space with retail stores, restaurants, condos, and offices – opened in Yonkers, New York. Among the lifestyle, center is an intimate children’s playground and an adjacent park. The green spaces are centrally located in Ridge Hill, between Market and 2nd Streets.

Ridge Hill playground. Photo was taken when large covers were installed to help create shade. Today in 2021, the covers have been removed because the tree canopy extends across the entire playground.

In hot and humid summer months, when Yonkers averages above 80°F and has a relative humidity range of 52-92%, the trees in the outdoor mall offer respite to adults and children alike.

During the multi-use space’s construction in 2011, seven Silver Linden’s (Tilia Cordata) trees were installed with 100 3X and 45 2X Silva Cells – able to sustain ample soil volume for the trees’ roots.

The site was particularly tight, and all the Silva Cells had to be installed within the confines of the play area itself. Not only is the area surrounded by fire lanes necessary to serve the adjacent buildings, but the custom-built, seated bronze play structure had to be supported by concrete pilings. These features led landscape architects OVSLA to select the 3X product, because the soil volumes add up quickly in tight urban spaces.

The soil chosen was typical of Silva Cells – a sandy loam with 3-5% organic matter, about 10% mature compost, and a pH suited to the plants.

The plant response has been outstanding and shows that the trees can take advantage of the full 43” depth of the rich A horizon topsoil.

Silva Cells protect the trees from harsh urban variables such as sidewalks and the heavy load of foot traffic, car traffic, and a decade of kids stomping and jumping all over the playground.
The player surface is another example of the versatility of Silva Cells and industry-leading design support services. DeepRoot’s technical team added a custom buildup of crushed aggregate over the Silva Cells. This was necessary before the 3.5” soft, poured-in-place play surface of recycled automobile tires and adhesives was added to support all the loads in the area, including not only kids but maintenance vehicles such as extendable booms regularly used to install holiday lighting over the site. 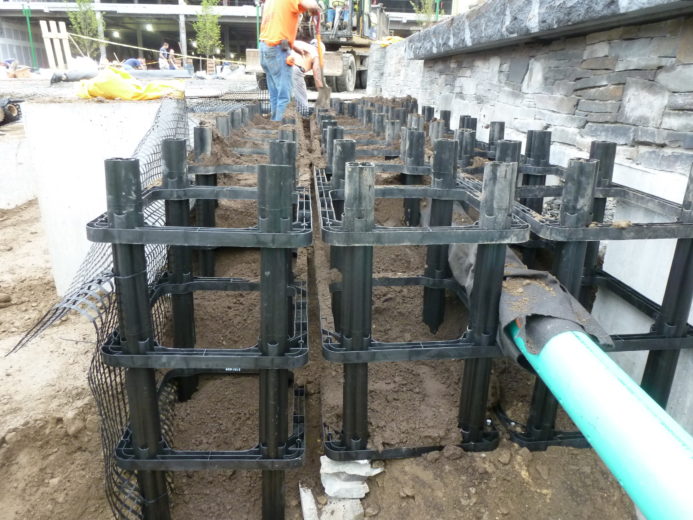 “Green space is balanced with contemporary architecture to create a graciously landscaped development that is enhanced by a modern swagger.”- OVSLA

The space adjacent to the park is used in non-winter months for events such as movie nights. The picture below shows the trees in the background providing a sense of place, green infrastructure, and guardianship over the playground. 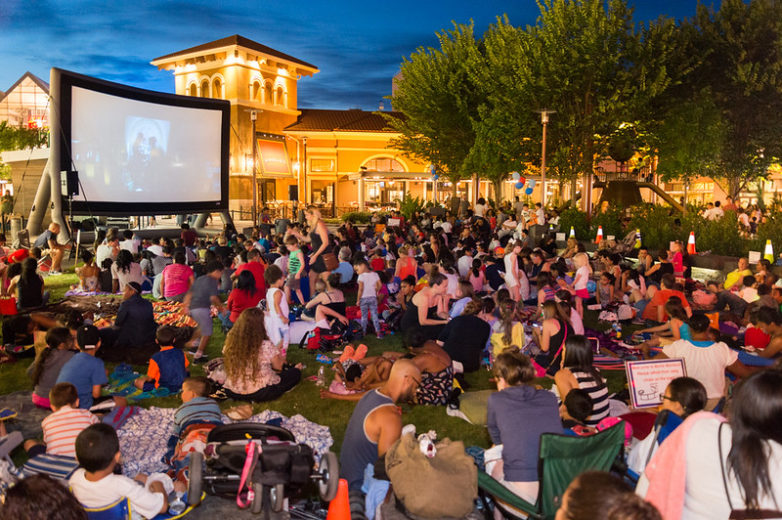 While businesses, restaurants, and retail have come and gone at Ridge Hill since 2011, the trees have stood tall, and have in fact thrived over the past decade. Much of this impressive, quick, and sustained growth can be attributed to the 647ft3 of soil that Silva Cells are holding per tree.

The park is enticing, with its green infrastructure of seven trees surrounding the play structure. In just five years, the area has been transformed into an oasis. The growth in these trees create an undeniable sense of place, safety, and shelter, where all are welcome between shopping or dining in the Ridge Hill Mall. 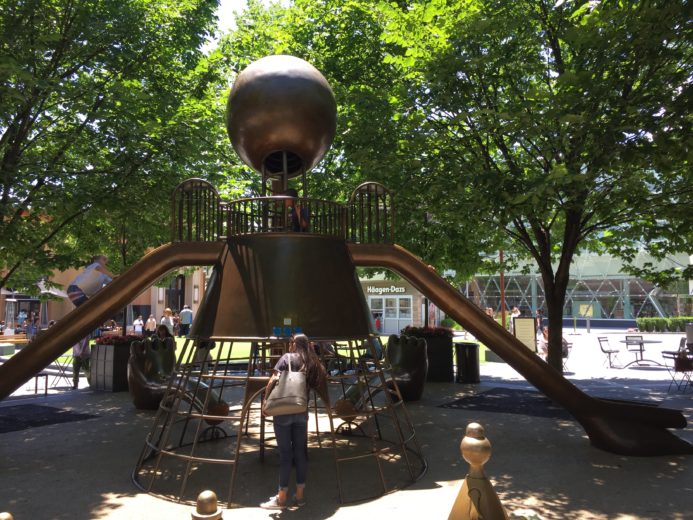 Ridge Hill playground in 2017. The shade covers have been removed because the tree canopy extends across the entire playground.