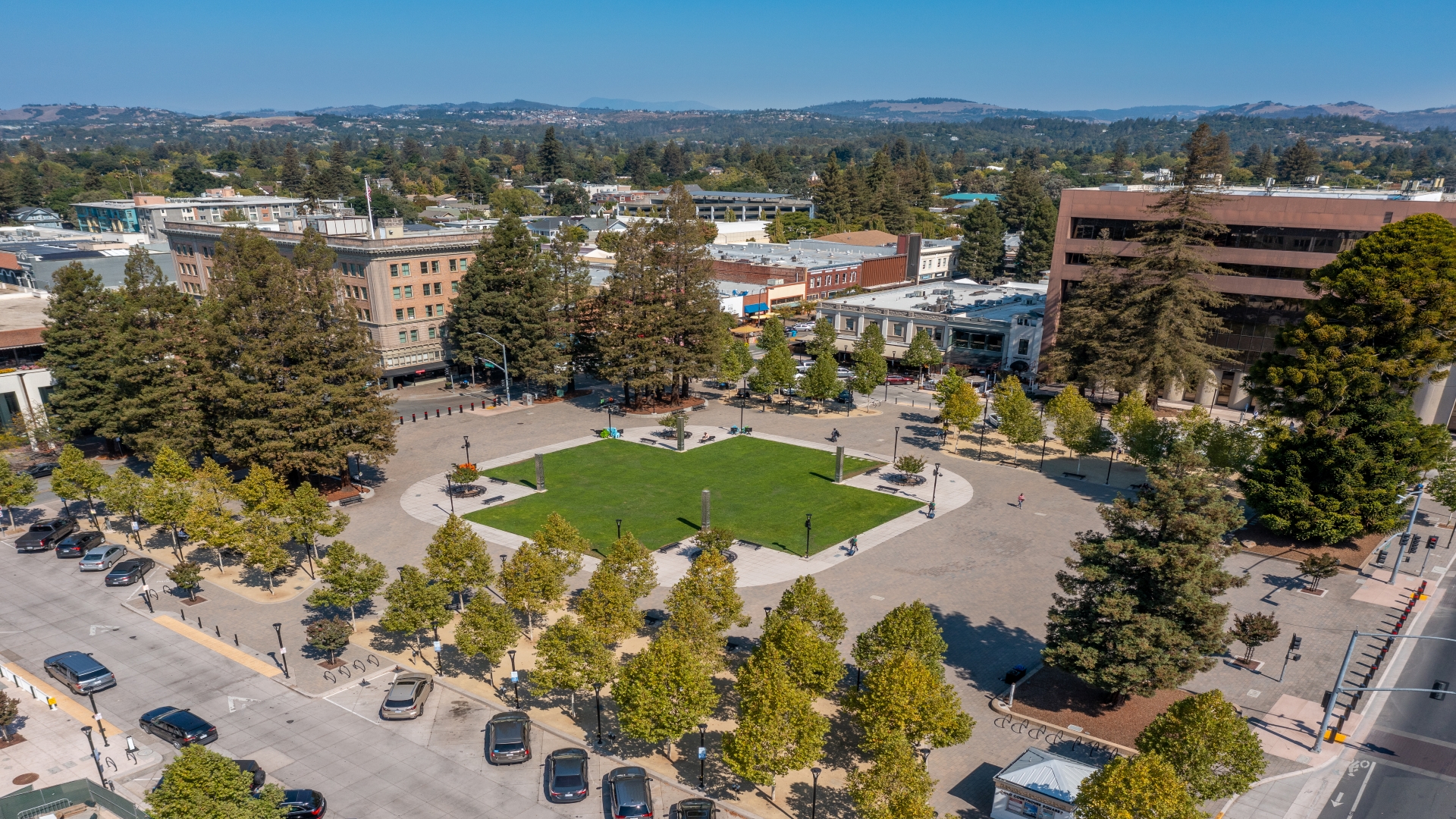 – In 2016 Santa Rosa’s Courthouse Square was reunified to create an outdoor plaza serving as a destination for public events.

– Thanks to the bioretention and evapotranspiration that 1050 2X units of Silva Cell provide, 87 trees surrounding the square are thriving.

– A year after its completion, in 2017, the project won the North Bay’s top real estate award.

The Santa Rosa Courthouse reunification was a long-awaited project. Its aim was to restore the city’s downtown square to its original layout, changing it from a space split in half by a four-lane road to one continuous 1.5-acre site. The plaza had been bisected by Mendocino and Santa Rosa Avenues since the mid-1960s when the city’s second courthouse was demolished. Santa Rosa’s first courthouse, which is commemorated with a large X-shaped lawn in the middle of the plaza, was destroyed in the 1906 San Francisco earthquake. 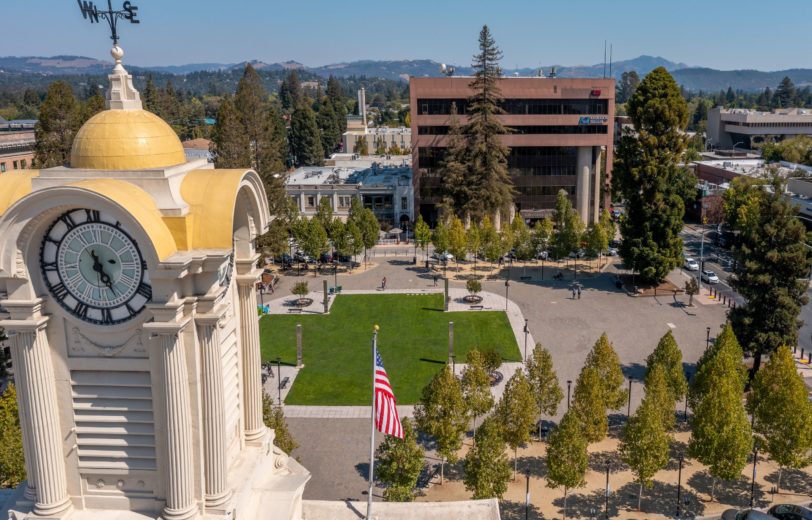 One of The City of Santa Rosa’s goals at the square was to protect stormwater flows into the Santa Rosa Creek and to retain as much rainwater onsite as possible for as long as possible. The city’s stormwater rules state that projects that create more than 10,000 square feet of impervious surface area must add features that reduce and treat stormwater runoff. Carlile Macy, the engineering firm in charge of the project, handled the requirement in two different ways: by using GraniteCrete, a product similar to decomposed granite to allow infiltration of water along walkways and by using pavers made of permeable material. The pavers are strong, fast draining, and very low maintenance.

In addition to the 45,000 permeable surface materials, Silva Cells provide 300 ft3 of uncompacted soil for each of 87 new trees planted in the plaza. They also provide storage area for stormwater, which percolates the soil within the cells and is consumed by the tree or absorbed into the soil, excess water is routed into a storm drain. The Silva Cells are equipped to bear the load of the pavers as well as traffic by humans and other vehicles during events like concerts, farmers markets, and emergency situations.

In an effort to preserve healthy, existing trees, Carlile Macy included this notion in their master plan. The design saved several of the existing large redwoods and one 150-year-old Bunya-Bunya tree. See the new and existing trees and all of their staggering growth in the overhead view below:

“A primary design element of Courthouse Square are the tree bosques which are intended to frame the square with leafy green areas of shade providing shelter and refuge from the sun on warm summer days while also providing a paved, permeable surface underneath able to withstand the heavy public use of an urban square.”

Installation Summary“We were drawn to the Silva Cells as the best solution to provide for growing healthy urban trees. When we realized that the Silva Cells were also capable of providing the required stormwater treatment, it became even easier to justify the additional investment as being able to address two goals of the project with a single design solution.” Curt Nichols, Carlile Macy