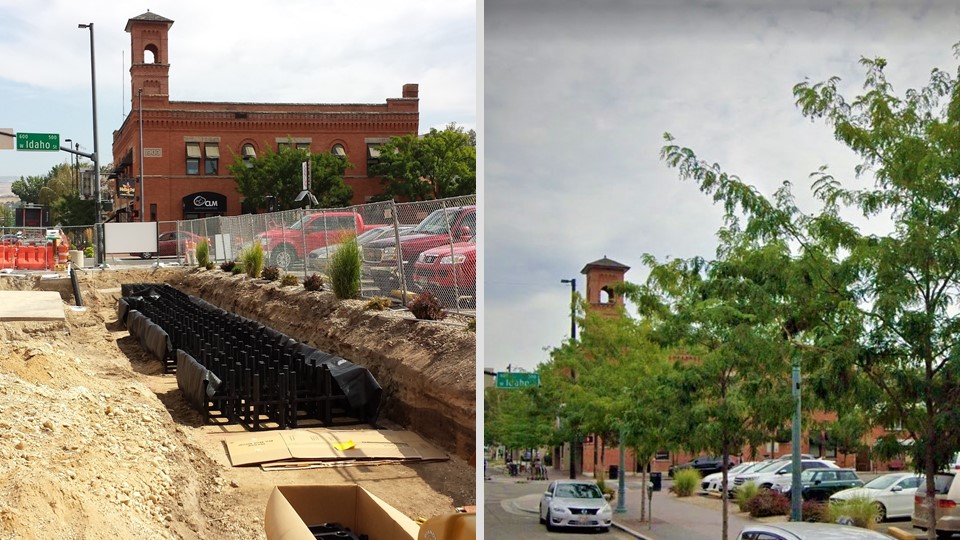 Over 450 trees are part of DeepRoot’s Silva Cell system in Boise. 30 projects and counting since the city began to incorporate the suspended pavement and biofiltration system into its streetscape, in 2014. 10,000 Silva Cells installed underground, with 80% of the Silva Cell projects also designed to manage stormwater. Seven years of partnerships between nonprofits, city council, industry leaders have created a cohesive process for using suspended pavement systems to improve the long-term health of street tree plantings across the city since. The latest and largest Silva Cell development, the 30th Silva Cell project in Boise, is West Side Urban Park. This new downtown urban park is currently under construction at 11th and Bannock in the heart of downtown Boise. It hosts 2,188 Silva Cells, supporting 22 trees in 63,000 ft3 of soil volume.

How did DeepRoot’s Silva Cell get its roots in Boise? How did its downtown area—specifically—incorporate 21 projects of Silva Cells in less than seven years? To get the full story, we turned to a local partner, Lance Davisson, president and co-founder of the Treasure Valley Canopy Network. 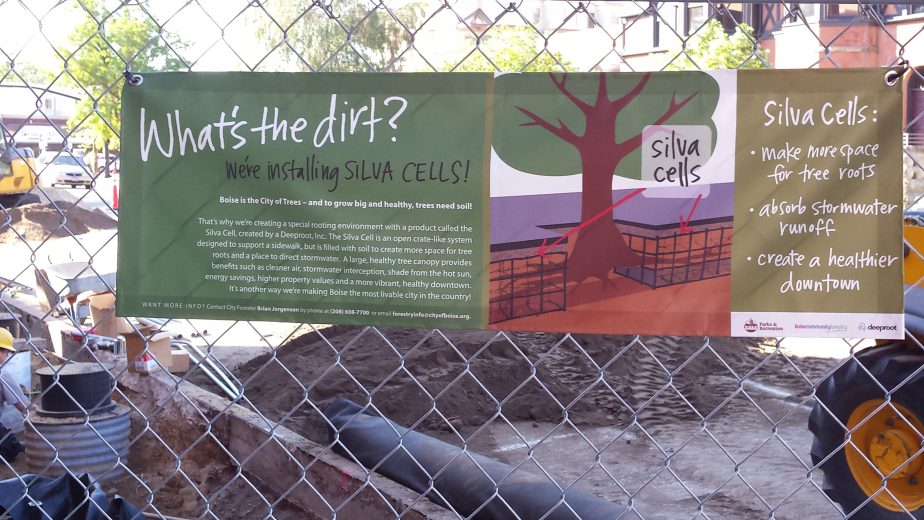 Boise’s legacy of prioritizing tree canopy in its downtown growth begins with an urban tree canopy assessment, funded by the USDA Forest Service and the Idaho Department of Lands in 2013, which eventually gave birth to the Treasure Valley Canopy (TVC) Network. The regional tree canopy assessment revealed that Boise had 16% tree canopy that provided multi-million-dollar annual benefits to air quality, water quality, and human health. Around 2014, when Boise’s economy was improving and leadership had a vision to build a more resilient downtown with a park-like environment, they approached Boise’s city forester to learn how they could expand tree canopy downtown. The answer? Suspended pavement systems that can not only produce larger, healthier tree canopy but also improve stormwater management in the city’s urban core.

Acknowledging concerns of cost and affordability, TVC network , CCDC, ACHD, city of Boise staff, and leadership worked with industry members (developers, landscape architects, planners, landscape installers, construction) to strategically design and implement the streetscape standards throughout the city. These stakeholders worked together to: (1) ensure effective design and installation; and (2) strategically incorporate stormwater design and increased tree canopy where it was needed most to improve the downtown environment for the benefit of business, residents, and visitors.

CCDC, the city, and design and construction teams have learned to create a more efficient process through the sheer number of projects that have led to a “practice makes perfect” situation. Lance recalled, “The first Silva Cell installation on 6th Street in 2014 was a huge lesson-learned experience. There were challenges with design, installation, and business operations during construction.”

Boise, Idaho, is known for, well, a lot. It’s Idaho’s capital and most populous city. It has breweries, cider houses, outdoor access to great hiking and adventuring, and its motto is one that we love, “The City of Trees”. Forbes named Boise the “fastest-growing city in 2018” and the “best place for millennials in 2019.” Huge population growth in the past decade and a renaissance of urban redesign in Boise’s downtown has led to incorporating more trees into a vast number of new streetscape and urban park projects. Since 2014, nearly every downtown street tree has been planted using the DeepRoot Silva Cell suspended pavement system. Boise, Idaho has streets lined with trees that account for over 30 Silva Cell projects.  A total of 450 trees, 225,000 ft3of soil volume, and over 10,000 Silva Cells make up Boise’s urban landscape. One of the 30 Silva Cell projects in Boise, featured in the Landscape Architecture Magazine, is in the downtown Grove Plaza.

Today, the process is effective and minimizes impacts to local businesses during construction. And we can see the results as Boise’s downtown is slowly turning into a network of cool and vibrant walkways lined by healthy and beautiful street trees.

One of the newest projects is the westside downtown urban park, a massive redevelopment project that will host a skyscraper with a large public space at its foundation, including 22 trees. This is the city’s 30th Silva Cell project and is on schedule for completion with an opening date of June 2021.

Boise’s Mayor, Lauren McLean, marches a progressive platform for climate action, equity, and transparency. The story of Boise’s downtown growth and network of urban trees and parks is an important statement piece. Together with Mayor McLean and Council President Elaine Clegg, the City of Boise and TVC Network are advancing the City of Trees Challenge (planting one tree for every household in Boise and one seedling for every resident in Idaho forests by 2030). All of these activities are coming together to create a more vibrant, healthy and resilient City of Trees for all Boiseans. 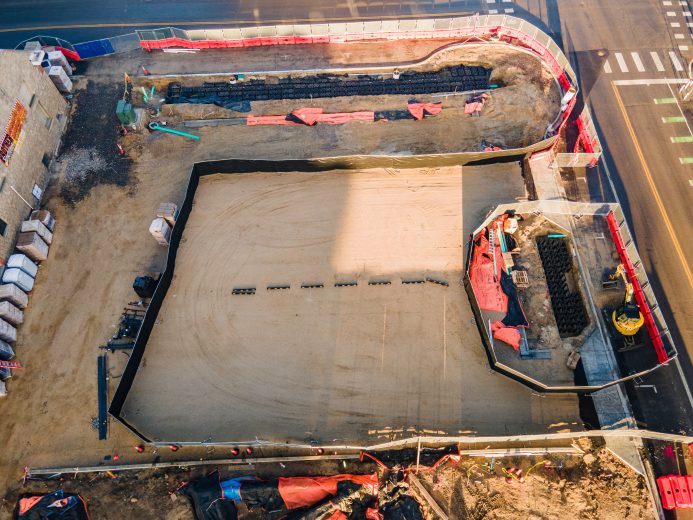 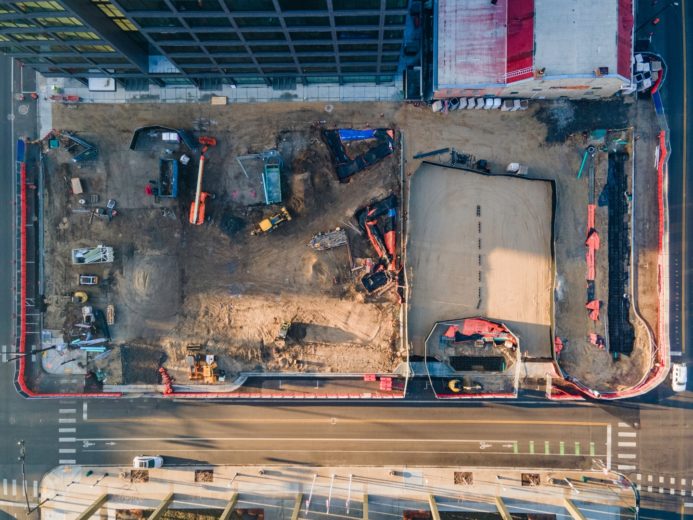 Seven years since the first Silva Cell project, DeepRoot has helped to incorporate over 400 trees with the soil volume they need to create a large urban tree canopy, supporting Boise’s growing population, improving stormwater management and mitigating urban heat and the impacts of climate change. 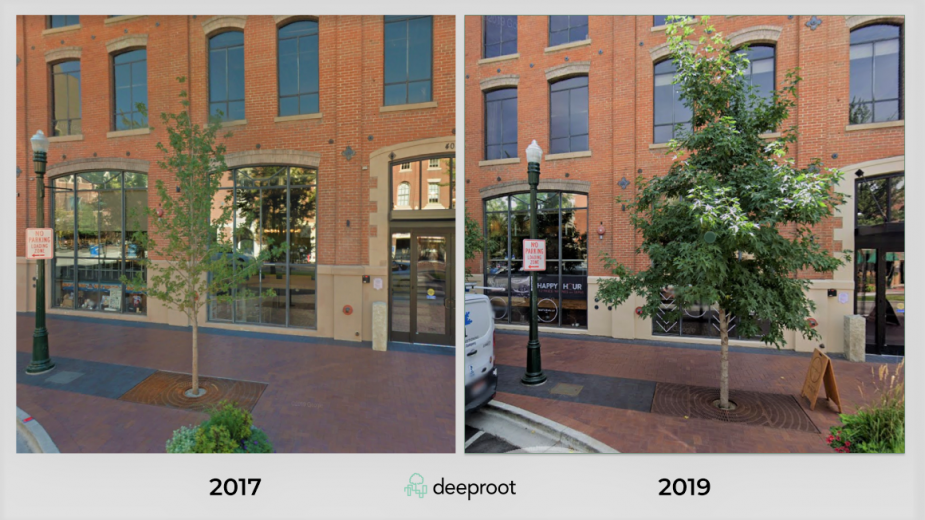 One of 30 trees that line Main, Idaho, and 6th Street in downtown Boise.