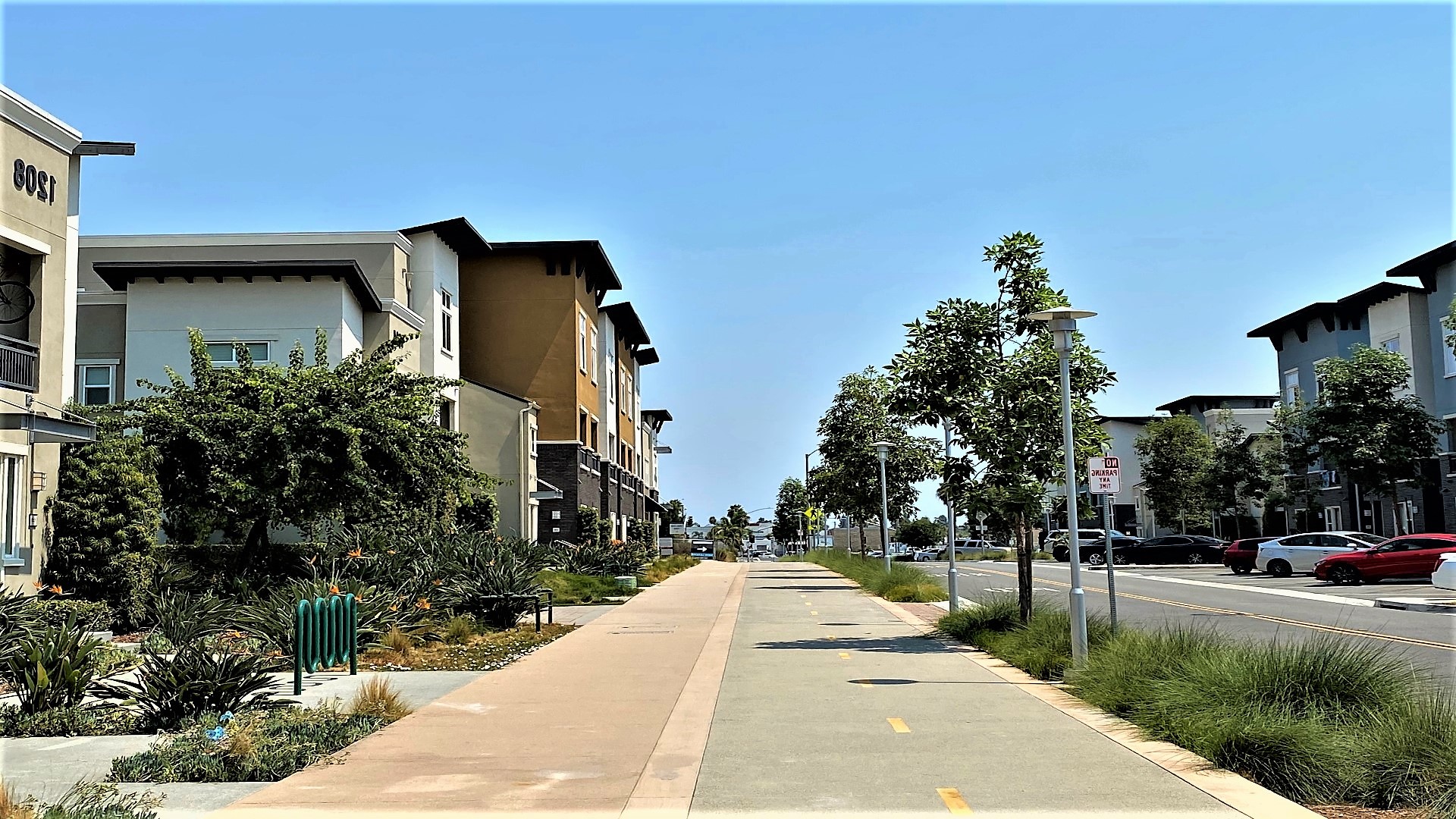 – Silva Cells were used as a stormwater quality BMP (best management practice) in order to comply with the Regional Water Quality Control Board.

Just 4 miles inland from the Pacific Ocean, and a 40-minute drive north from San Diego, San Marcos, California, is a vibrant, growing city that continues to benefit from its commitment to a green infrastructure. In 2020, the city’s population topped 100,000.  Palomar College and California State University San Marcos call it home. The northern San Diego communities of Escondido, Oceanside, and San Marcos are connected by light rail transit, called the Sprinter, allowing for easy commuting and movement within the region for shopping, hiking, and eating out.

In San Marcos, between Palomar College’s light rail stop and I-78, lies a community of apartment complexes, restaurants, public parks, and pedestrian-friendly paths. In 2015 the Armorlite Drive Smart Growth Improvement Project began, focused on this neighborhood. Now, in 2020, we are seeing the fruits of the project team’s labor.

Designers at KTU + A Planning + Landscape Architecture and Michael Baker International (previously RBF Consulting, Carlsbad) set a goal of creating a more holistic street setting and improve the industrial backdrop from transport roads and rails. Armorlite runs perpendicular to and between Las Posas Road and Bingham Drive. The street design included 52 trees for its community members along with an 8-foot-wide bike lane, 10-foot wide sidewalks for outdoor cafes and restaurants, bike racks, and underground bioretention from 440 2x Silva Cells. In all, 8,800 cubic feet of soil was installed under the paving to support more than 50 new trees and to manage the street’s stormwater. The designers specified Silva Cells in order to support the weight of the sidewalk while also providing adequate soil volume and managing stormwater beneath the paving for the live oak, Brisbane box, and crape myrtle trees. 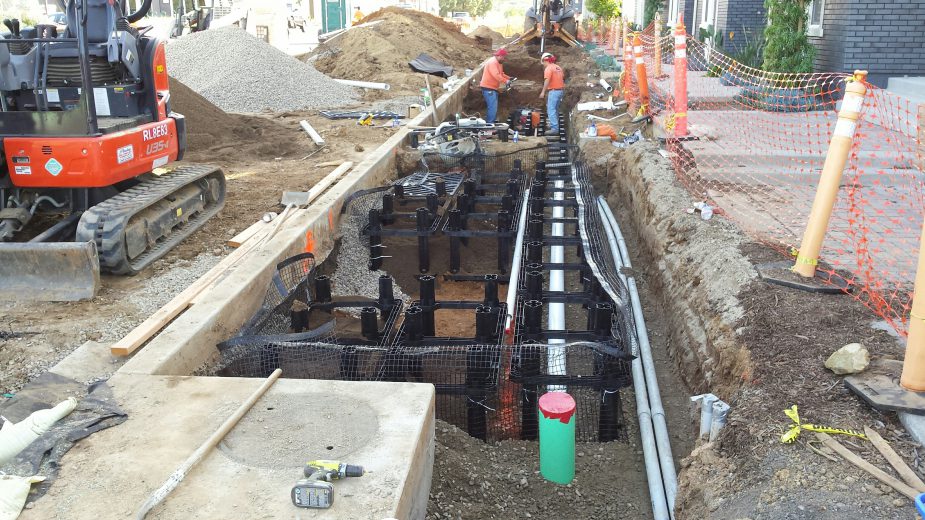 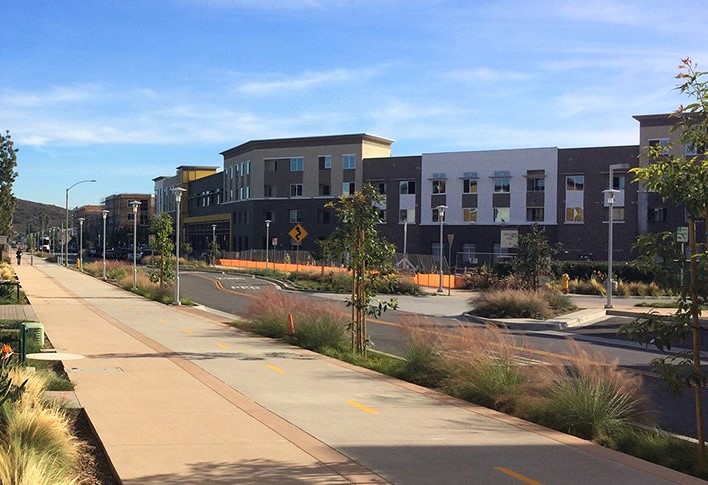 On the south side of Armorlite Drive, a 24” precast grate inlet catch basin captures water for inflow to the Silva Cell system via a 4” perforated PVC pipe that distributes water throughout the system while a 4”perforated PVC pipe functions as the underdrain within a 12” class 2 permeable base.

Silva Cells minimized infrastructure and maintenance costs while allowing runoff to filter through the soil, where it can be cleaned and cooled before entering the city’s storm sewer or the nearby San Marcos Creek. The design was made to be able to handle a 100-year rain event (121mm/24 hours) and manages water quality, peak, and volume. During a given event, the underground bioretention system with San Diego County–approved biofiltration soils provided storage capacity of roughly 15,000 gallons as part of pore storage.

“We used Silva Cells as a stormwater quality BMP (best management practice) in order to comply with the Regional Water Quality Control Board storm drain requirements and to provide pollutant-control and flow-control functions. The best way to achieve this is through biofiltration, which is usually done with a bioretention area at the ground surface. With a roadway project like this, the surface area to do bioretention is hard to find. The underground Silva Cells were the perfect solution,” says David Wiener of RBF Consulting, the engineering, planning, and consulting firm on the project. He continued, “We considered permeable pavement, bioretention areas, and proprietary filtration devices. Silva Cells made the most sense because they provide all the stormwater benefit that we need, don’t take up surface area, and are great for the proposed trees.”

Once a nondescript street lined by warehouses and empty lots, Armorlite Drive has undergone a complete transformation and is now more livable, green, and pedestrian–friendly.

The enlarged tree canopy and street beautification have contributed to the local economy as well as providing shade for the community. There is well established research demonstrating the increased property values that street trees provide and the trees at Armorlite Drive are no exception.

The assistant manager of Marc Apartments, Amanda, said in summer of 2020, “The trees are beautiful to look at and provide a lot of shade. It gives it more of a communal feeling. We are right next to the industrial area, so it helps to partition between community and transit industry.” The Marc Apartments hosts 500+ residents, and that is just one of four apartments that line the Armorlite Drive.

Close to 200ft3 of soil per tree, ample growing space, and irrigation have all contributed to significant growth in three years. 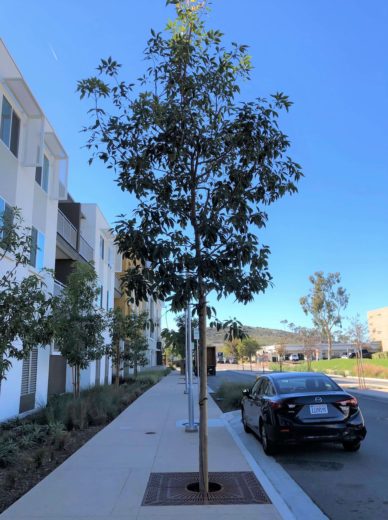 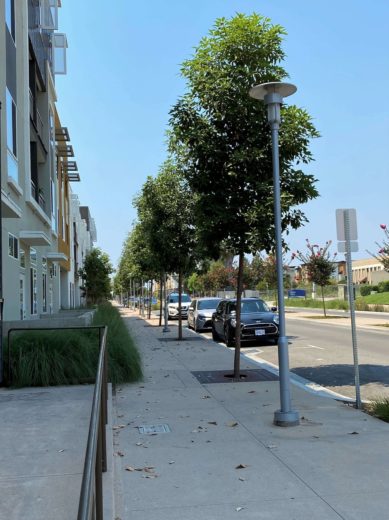 Trees on the left side of Armorlite drive when walking towards Bingham. (jan 2019). The same tree a year and a half later showing substantial growth (aug 2020)

Though the community members who reap the benefits of Armorlite Drive’s smart growth improvement cannot see the Silva Cells, or perhaps may not know of the healthy amount of soil volume and stormwater capture that is being managed by the Silva Cells, they are able to enjoy what they see and feel aboveground: more biodiversity, increased shade, a sense of place, and an overall greener, safer community that is at its core geared toward pedestrian safety and health.

The trees’ health and viability will continue to flourish and be sustained for decades to come. This is only the beginning and we look forward to seeing the evolution of the trees in the seasons to come. 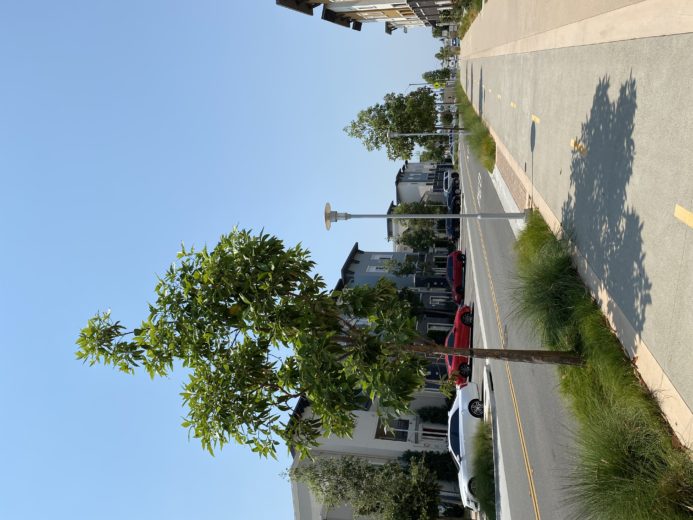 Trees on the right side of Armorlite Drive, when walking toward Las Posas. August 2020