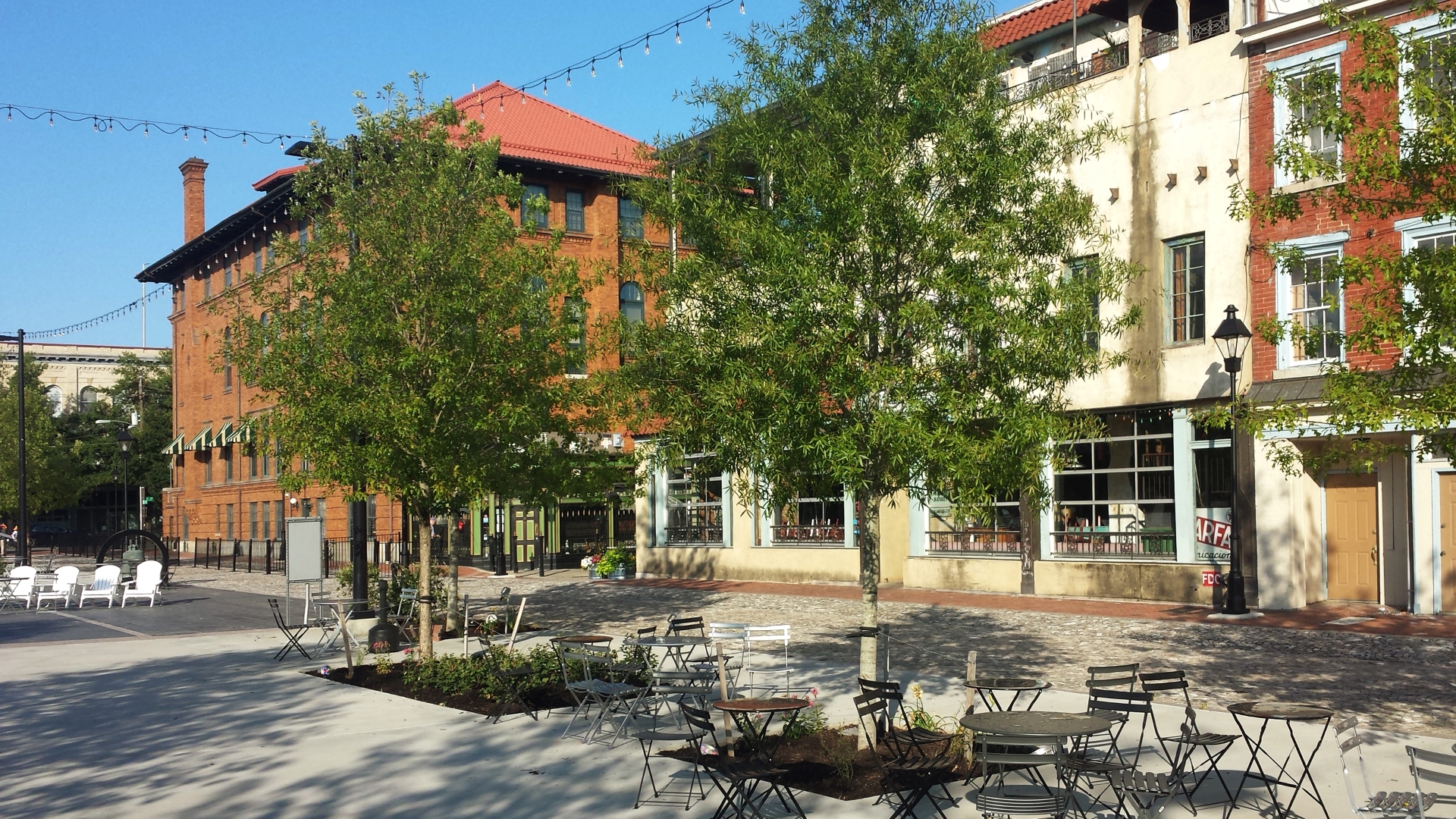 – After nearly two decades of ideas and proposals, the site was completely transformed into a multiuse, pedestrian, bike-friendly, plaza with 22 Oak Trees supported by 516 2X Silva Cells.

A Brief History & The Need for Renovation

Richmond, Virginia’s 17th Street Farmers Market is the oldest of its kind in the nation, declared a public market in 1779. (Though some accounts claim it started unofficially as early as 1737).  As commerce grew, so did the market, and in 1854 a building adjacent to the square was erected, dubbed “The First Market House.” This would be the first of many renovations to the central market of the Shockoe Bottom neighborhood. Restorations followed in 1913 and then much later in 1986 under the guidance of the Richmond Industrial Development Authority. In 2018, 42 years since the last touch-up, a new development entered the history books for the market. The 1.25-acre site was rebuilt with multiuse design, resiliency, and long-term public welfare in mind. In 2019 the site was completely transformed into a multiuse, pedestrian, bike-friendly, plaza with 22 Oak Trees supported by 516 2X Silva Cells.  The project team’s vision of the early 2000s, providing space for people, different types of events, and big healthy trees that offer shade and reduce heat island in the urban area, came true. 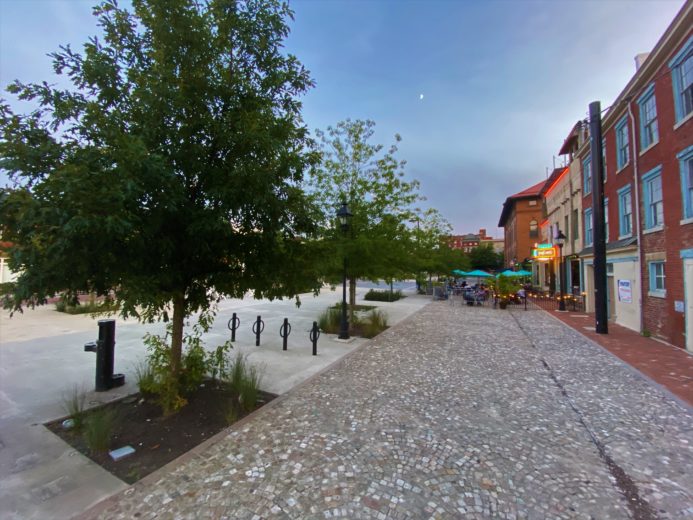 Talk of the fourth renovation had begun as early as 2004. The early 2000s saw visitor turnout to the market wax and wane and a drop in revenue. A domino effect of tropical storm damage to crops, personal accounts of bad vibes from an old local prison nearby, and competition from a market across town in Randolph were all factors that put the market on life support for the first decade of the new millennium. The competing market in Randolph, Byrd House, is noted by locals as a much better space for activities and more attractive because of its green infrastructure.
In 2012, Chris Dovi captured local accounts of the then proposed 17th Street Market renovation in his article Cornering the Market in Richmond Magazine. Describing the nearby Byrd House, Dovi writes, “It bears little resemblance to 17th St. in that it has learning gardens, healthy eating options, no walls, no metal awnings, and open-air space.” George Bolors, who was at the time the 17th St. Market manager, commented on what needed to happen to 17th Street, saying, “Capturing a bit of Byrd House magic, creating space, inviting the community to events is at the heart of the revitalization plan.” Bolos reiterated that there’d been a noticeable difference in the market attendance since Tropical Storm Gaston in 2004, as produce was lacking and more bazaars had popped up. When speaking about bringing people back to the market, Bolos stated, “We can get back to our roots, but it’s going to take some work.” The market became reliant on events other than the weekly market, such as autumn brew and bacon festivals. It was clear to planners, designers, and the city that the market needed to be greener, more inviting, and flexible in its ability to shift shape to accommodate a larger volume of goods and myriad events in the space.
Finally, in October 2012, the city announced its proposal to revitalize, stating, “The existing architecture and configuration [will] turn into an open urban square that better relates to the neighborhood.” This was accomplished in large part thanks to Lee Downey, Richmond’s economic development director. Downey argued to preserve the history of the market and help provide healthy food options to the community.

Middle of the market-facing west in front of Walnut Alley. The space was used as a place to park cars when the farmers market was not active. Photo from Google Streetview, July 2017

Middle of the market-facing west, in front of Walnut Alley. The space is now mixed-use, open to all events, and is pedestrian and tree-oriented. Photo from Google Streetview, July 2019.

In the spring of 2018 construction began, with a plan to create the mixed-use plaza with 22 new Oak Trees, and a design that embraces quality craftsmanship. The market is located between restaurants and businesses that previously didn’t have access to an appealing outdoor area. The landscape designer, Baskervill, wanted the feel of an “outdoor living room, with a pedestrian-oriented and vibrant plaza.”

Topographically, the project site sits on an area that is lower than the rest of Richmond, close to the James River, making it more susceptible to flooding. The project team’s architect of record, Baskervill; the civil engineer, Timmons; the contractor, Southwood Building Systems; and the landscape architect, Tillage LLC all understood the Silva Cells had to meet the engineering requirements while also enhancing the aesthetics of the space and supporting the health of the trees. In an interview with local news NBC12, Stacey Farinholt (previously with  Spatial Affairs) with Tillage LLC spoke on design decisions with the trees and how Silva Cells prevent tree die-off and replacement.

“What we’ve done is open it up so it can be used in any type of public gathering. The best way to make that happen is by providing shade for people during the summer. Unfortunately, there is a pattern of replacing trees, without trees ever getting big enough to give you benefits. These canopies will easily get above the roofline of all the [surrounding] buildings” – Stacey Farinholt 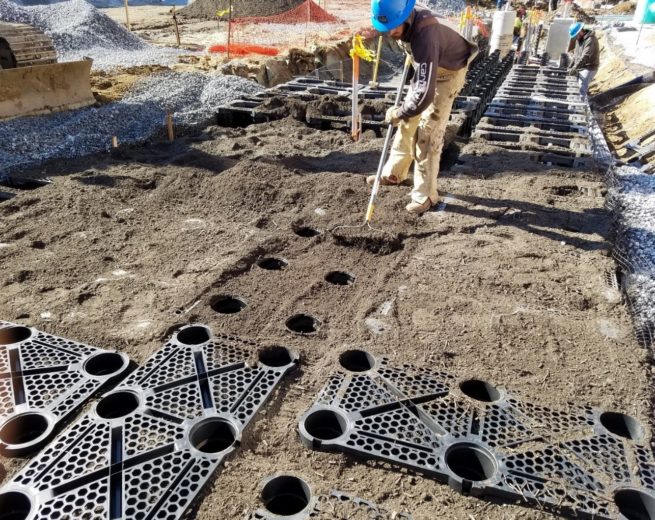 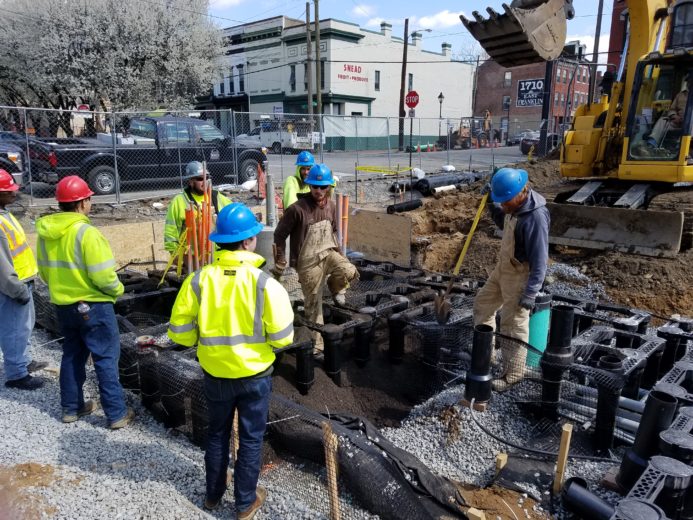 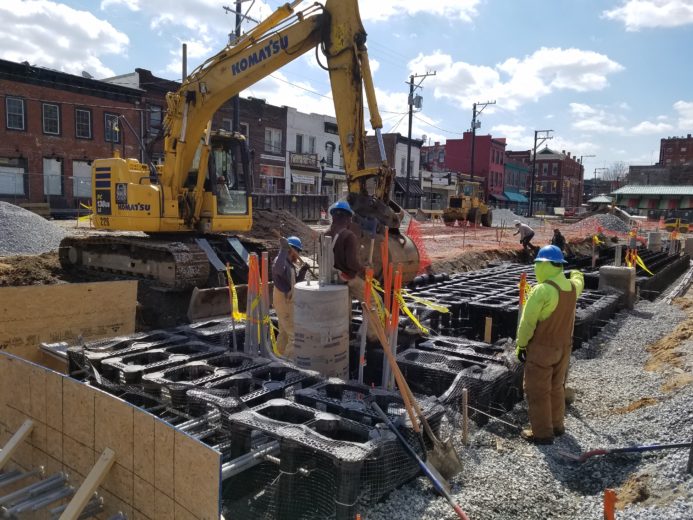 Dual Support Above and Below Ground 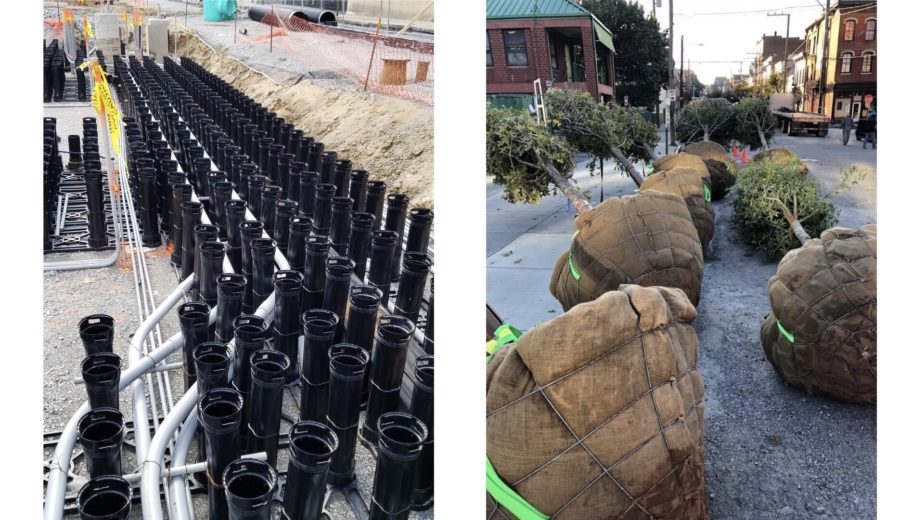 The 516 Silva Cells in the 1.25-acre market create a unique level of support for the trees, the pavement, and the soil, all while maneuvering around decades-old utilities. DeepRoot’s technical director, Pat Greeley, commented on Silva Cells’ role in this project.

“The 17th Street Market is a multi-use space with food trucks one day and pedestrian gatherings the next. The Silva Cells meet the loading requirements for the paving and our larger module size and unconnected system with variable spacing handles all the utility needs, helping make the entire project a success.”

Today the market is under new management and now has a new name to capture its broader goal of being mixed-use space: The 17th Street Market. The Parks, Recreation and Community Facilities (PRCF) department took over as the market manager on July 1, 2019. The space is used by yoga classes, art and jewelry vendors, tourists on Capital Trail, and locals to enjoy shade in the hot Richmond summer days. DeepRoot looks forward to seeing the trees and the space thrive and evolve for the long haul and make a new mark on history. The 12,000 cubic feet of soil that sits below the concrete and between the Silva Cells will give the trees a chance to live to their full potential, and create a new chapter for the plaza from 2020 and beyond. 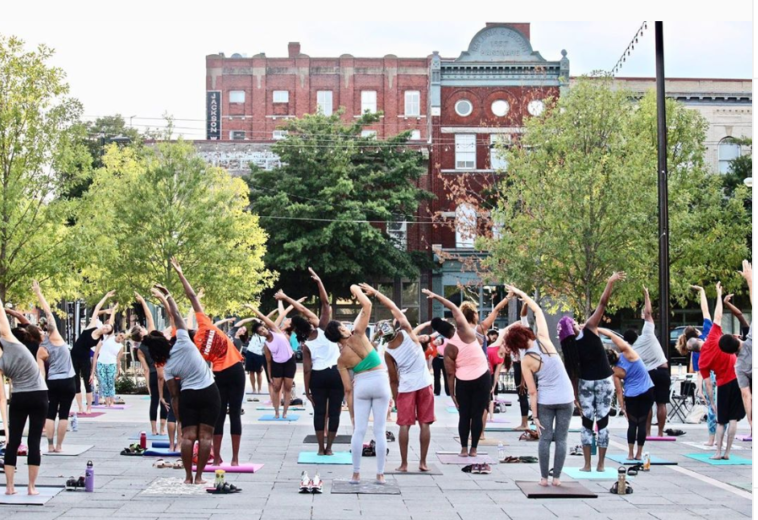 Photo courtesy of Bare SOUL Yoga Instagram. The space has been used as a weekly outdoor Yoga studio since April 2019. Photo posted September 2019.

For more see an interview with Aaron McFarland from TreeLab, on our blog, to hear about how he tended to the trees their first year at the market.