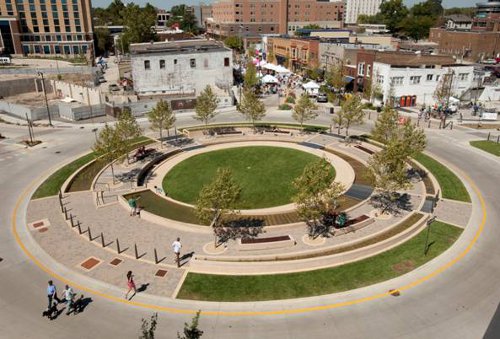 Uptown Circle, the centerpiece of an urban redevelopment project in the central Illinois town of Normal, was recently honored by the Illinois Chapter of the American Society of Landscape Architects at its annual Celebration in Chicago.  Designed by Hoerr Schaudt Landscape Architects, the project received the President’s Award in the Urban category, the highest recognition awarded.

The Uptown Normal Circle is an unusual roundabout in the heart of a new redevelopment district in Normal, IL. It was conceived to showcase Normal’s commitment to sustainability and creates a space where naturally-cleansed stormwater, public space, and transportation work in unison.  As the Circle calms traffic, it also provides a central green gathering space with seating, a water feature, shade, and an open plaza. 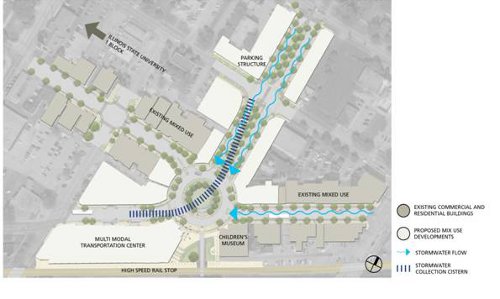 A major element of the project is sustainable stormwater management; capturing, storing, cleansing and recycling much of the stormwater in Uptown Normal.   Runoff is collected from several streets adjoining the Circle and is stored in a 75,000 gallon underground cistern. Water captured and retained in the cistern is then either used for irrigation of turf and plant material in the district or is introduced into the Circle.

Water collected in the cistern is pumped into a series of terraced filtration bogs where it is cleansed as it flows slowly through the plant material around the circle. The water is then pumped into an underground reservoir, treated by a UV filter and then circulated through a shallow stream-like water feature that entices interaction on a hot summer day. On its journey through the Circle, the water becomes a demonstration of sustainability in an urban environment. 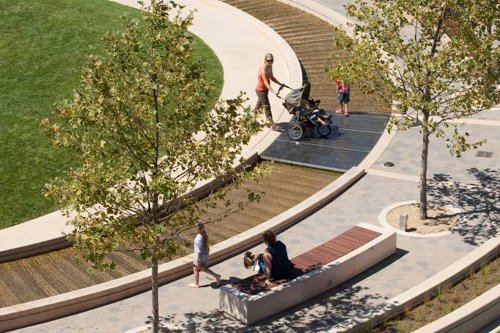 Trees are a critical part of the redevelopment and we utilized Silva Cells throughout, both within the park space of the Circle and along several blocks of streetscape improvements.  We were looking for a solution that would provide the best growing conditions for the diverse collection of large caliper shade trees planned for the project.  Recognizing the importance of the ring of London Planetrees would play in the design of the Circle, the Silva Cells provided the ideal means to integrate trees into a plaza that primarily consists of paving.  The Silva Cell system also enhances the stormwater retention capacity of the area helping to alleviate burden on the regions network of streams and rivers.

The Uptown Circle has been embraced as a new symbol and focal point in the community. Its unique role as an example of high-performance infrastructure, integrating multiple civic elements such as roadways, pedestrian corridors, stormwater quantity and quality control and public space into a single project, has distinguished it from traditional forms of urban redevelopment.

This guest post comes to us from Rob Gray, an Associate Principal at Hoerr Schaudt Landscape Architects. Rob holds degrees in landscape architecture from Louisiana State University and the Harvard Graduate School of Design. He has a passion for finding creative ways to integrate green infrastructure into the built environment and also for playing the bassoon (how many people can say that?!). You can learn more about the Uptown Circle on the Hoerr Schaudt website, and read more of Rob Gray’s writing on their company blog, The Shouting Hare.

All images courtesy of Hoerr Schaudt.