This is the second of a series of five featuring case studies that illustrate the need for a paradigm shift for how streets and sidewalks are designed and constructed, from the old linear view of city infrastructure to a new paradigm for green infrastructure that is based on Creativity, Collaboration, and Compromise (CC&C). This post looks at the design and installation of trees along the street frontage of a social housing project in downtown Toronto, Ontario, with landscape architecture by Janet Rosenberg & Studio Inc.

With a limited budget and space, green infrastructure elements such as tree installations were difficult to implement. The city of Toronto’s Green Standard mandated 30m3 (1,060 ft3) of soil per tree. As discussed in the initial post, a tree and its soil volume are integrally connected. In the new paradigm, the design considers the necessary soil volume to accompany tree installations.

Providing that much soil in a very dense urban development was made possible by using Silva Cells under the paved areas of the sidewalk and front yards. Having a soil volume standard for street trees changes the nature of the design process. The design team must take into account the soil volume needed for the trees at the beginning of the design process, and the solutions generated need to consider the construction process involved in order to build them as designed.

The landscape architect for this project was involved in the discussion of all aspects of the project from the initial stages of the design process to strategizing with the general contractor and the utility provider about the logistics of who does what, when. This project is an excellent example of a landscape architect together with a group of professionals drawing on the 3 C’s and successfully shifting from an old paradigm to a new, to create green infrastructure. 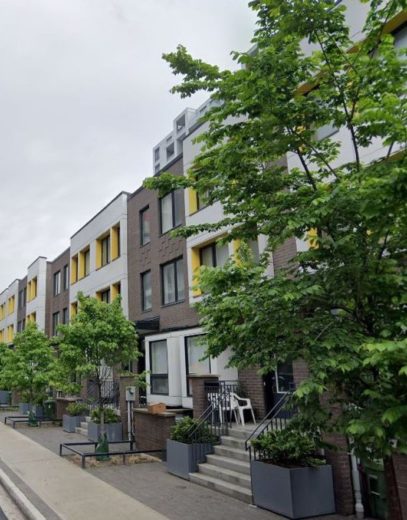 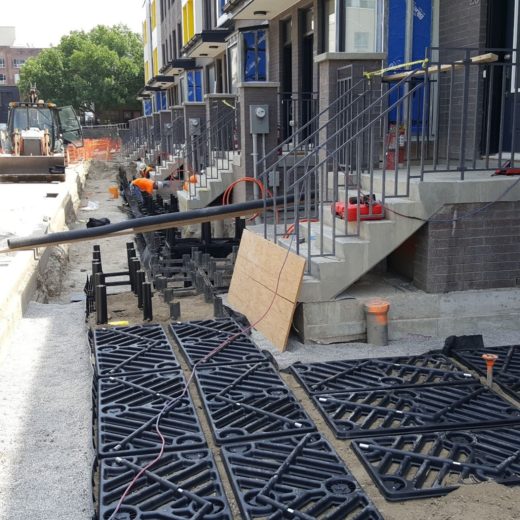 Due to space constraints, it was not possible to achieve ideal soil volumes that would support the tree canopy over the entire street. Silva Cells were used under as much of the hard surface area as possible to provide enough soil to grow significant-sized trees. They may not mature to a stature with a crown that arches over the roadway but will provide canopy over the porches and sidewalks of the housing units.

The only solution was for the gas main to be incorporated into the Silva Cells. Enbridge compromised on this requirement and cooperated with the retrofitting of the Silva Cells. 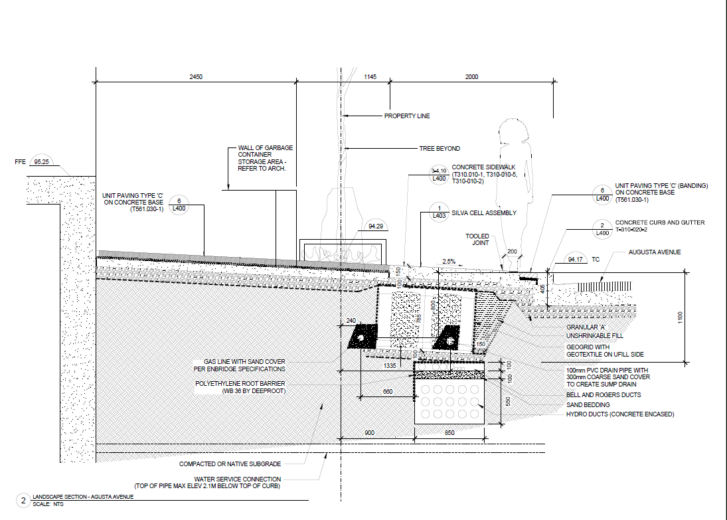 Enbridge’s goal was to access the main lateral connection as easily as possible. When the access operation was discussed, the conclusion was that the repair and restoration process would be easier if the main and the lateral connection was located within the Silva Cells. For repair, the Silva Cell deck would be removed, allowing the contractor to hand-dig or hydrovac out the uncompacted soil in the Silva Cells surrounding the lateral. This would then provide enough room to access the connection, complete repairs, and restore service. The adjustments to the Silva Cell and the gas main allowed the project to meet their design soil volumes for the trees.

Enbridge’s cooperation was critical to facilitating the tree planting effort, which would have been seriously compromised in the old paradigm. Typically, the electrical and telecommunication ducts are installed without any regard for the whole of the sidewalk assembly. There is generally enough flexibility that utilities can drift this way and that but still respect each other’s clearance requirements, as was demonstrated in this case. Integrating soil requirements for trees will require more precision about the location for utilities. This point was made at preconstruction meetings, but it didn’t work out as discussed. In defense of the electrical contractor, maybe on paper the clearance requirements worked out, but unless it is translated to the field, it won’t happen as planned. Possibly because the electrical installation happened before the concrete curb was poured, the contractor had no precise reference line, like on a drawing.

This is an example at the micro scale of the old paradigm meeting the new; a “last mile” problem where design intent does not get translated into the necessary “in the field” instructions. 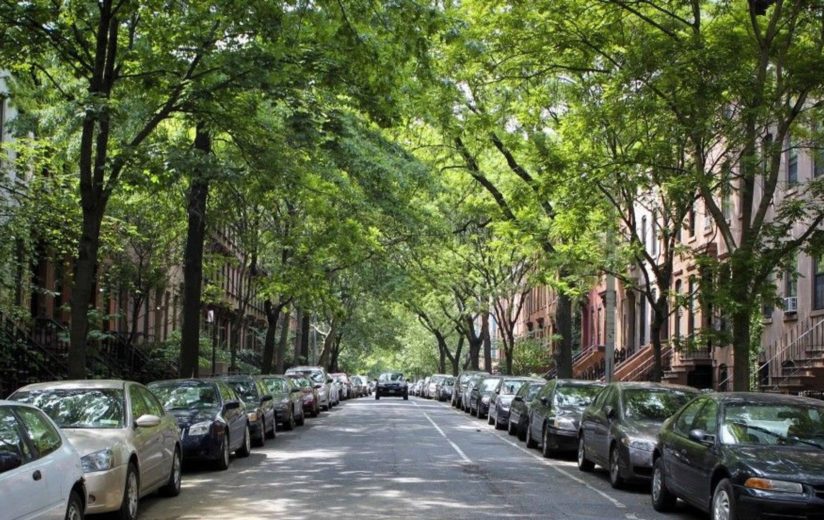 What More Could Be Accomplished

With the knowledge about incorporating the gas main and laterals within the field of Silva Cells and with similar cooperation from the electrical and telecom companies, future projects could install an extra row or two of Silva Cells, providing more soil for bigger, healthier trees.

The success of this project was the result of the CC&C from Enbridge Gas, the general contractor, and the landscape architect and its client. The architects for the project were not part of this cooperative, but they should have been. In order to fully integrate trees as an integral part of the infrastructure, there must be a collaboration between architect and landscape architect from the very beginning. Collaboration over coffee and on paper at the beginning of the project is easy enough. It’s the collaboration and coordination through to construction that is the challenge … the last mile.

The landscape architect and the architect agreed early on in the design process that the Silva Cells could go under the porches, providing more soil volume. To achieve this, the Silva Cells would have to be installed prior to the porches. Structurally this was not a problem, but the sequencing of the construction was. The old paradigm where trees come last prevailed. In defense of the architect, below is an explanation of why this was difficult to do. Difficult but not impossible. 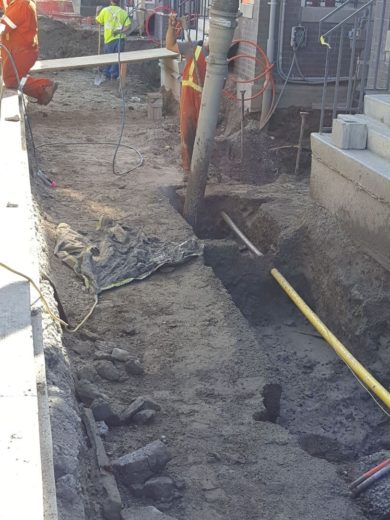 Excavating the same soil, a second time using a hydrovac.

Historically, tree planting is typically associated with the work of constructing a sidewalk, usually at the very end of the construction process. The new paradigm of a tree and its soil volume being an integral part of the project design means it cannot be left to the end and it may make sense for the installation of the Silva Cells and soil to be connected to the construction of the building.

The photo above shows the soil being excavated in order to install the Silva Cells. This is the second time the same soil has been excavated. The first time the soil was excavated was by the Enbridge Gas contractor when installing the gas main with a backhoe. The utility companies have a requirement that they cover their installation in a timely manner, usually immediately after having completed it. This required a second excavation to install the Silva Cells, which is more expensive because a hydrovac had to be used since a backhoe cannot be used to excavate around a gas main. The soil above the electrical and telecom had to be removed a second time as well to accommodate the Silva Cells.

This would result in much more soil, more certainty about what is designed, and what is constructed. It would have given the architects the confidence to pursue the landscape architect’s idea to place the Silva Cells under the porch. The contractor had to provide access to the main floor of the building that was 4ft above grade long before even the utilities were installed. The architect could have excavated and installed the Silva Cells that were to be placed under the porch. But that would have required more CC&C than all involved were capable of at that time.

The cooperation of Enbridge on this project should become accepted practice with other utilities. The benefits of installing utilities integrated with Silva Cells would be a huge leap toward achieving green infrastructure. Utility companies will need to revise their clearance requirements between their ducts or pipes and Silva Cells. The key to that happening is clarifying what Silva Cells are. Are Silva Cells a structure or a special kind of backfill? Designating Silva Cells as a special kind of backfill has been made successfully in some instances. A clearance of less than 30cm was permitted because of extenuating circumstances and the personnel involved had a high CC&C quotient. The rationale was that with Silva Cells, like any other backfill, if you need more space you remove it. Silva Cells are an unconnected modular system which means individual Silva Cells can be either temporarily or permanently removed if more space is required. The converse of that argument is that compacted granular “A” is a structure, and like the Silva Cells, it is holding up the sidewalk above. Yet no one requires a 30cm clearance from granular “A” backfill.

More work is being done in Toronto to demonstrate the benefits of revising the clearance requirements between utilities and Silva Cells. The integration of all parts of the street, sidewalk, and the interface with the adjacent building must be considered in order to create green infrastructure.

We know there are solutions. There are a growing number of examples where Silva Cells are used under the parking lane, building entrance steps, and sidewalks to provide stormwater retention and soil for trees, significantly improving the ability to grow healthy, mature trees in confined urban spaces. Designing the sidewalk in concert with the adjacent building is a tremendous opportunity to successfully integrate green infrastructure and a new paradigm in construction standards using Creativity, Collaboration and Compromise.